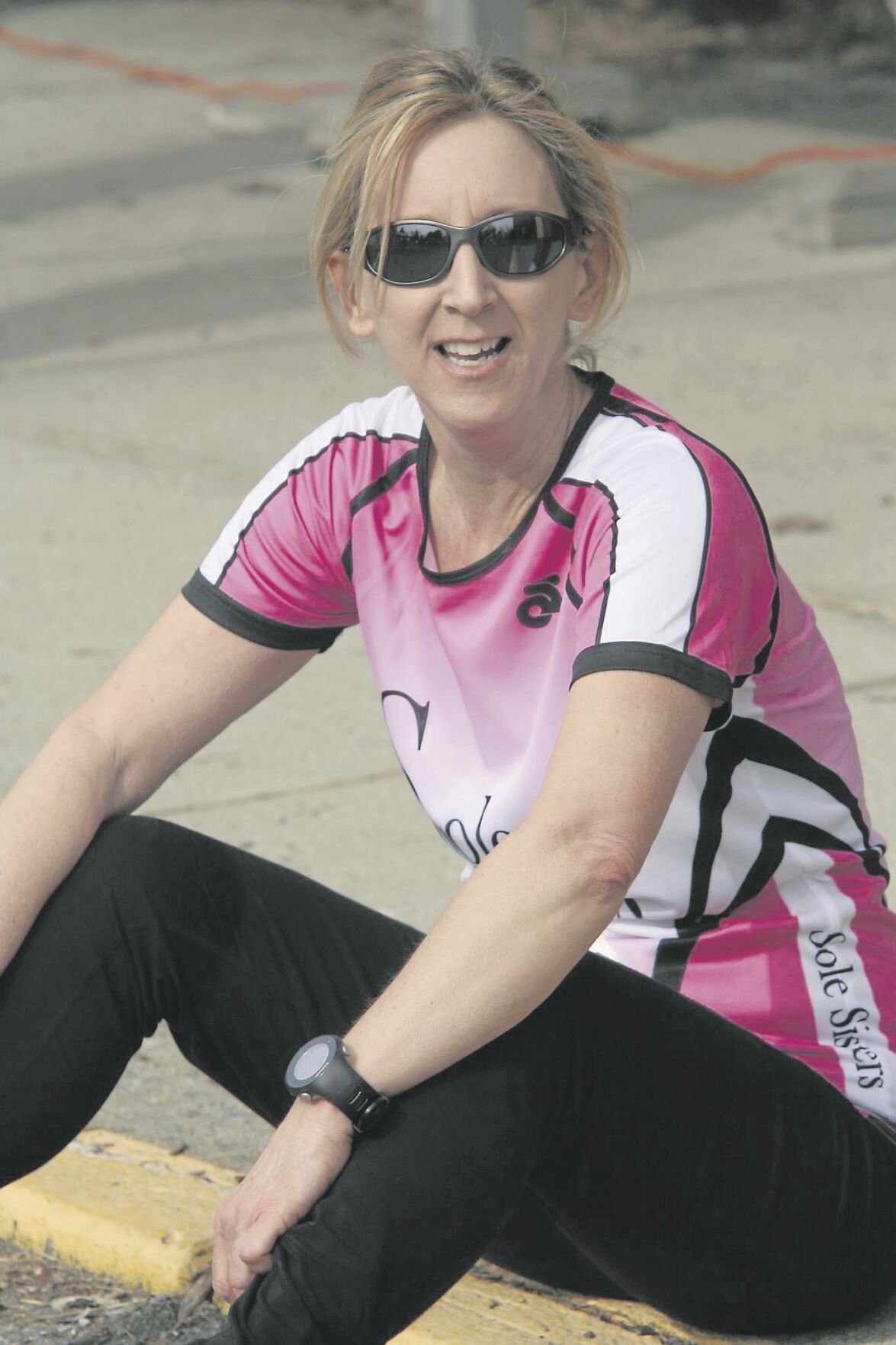 Glenda was part of the Wytheville-based running group Sole Sisters when she first began running in 2011. 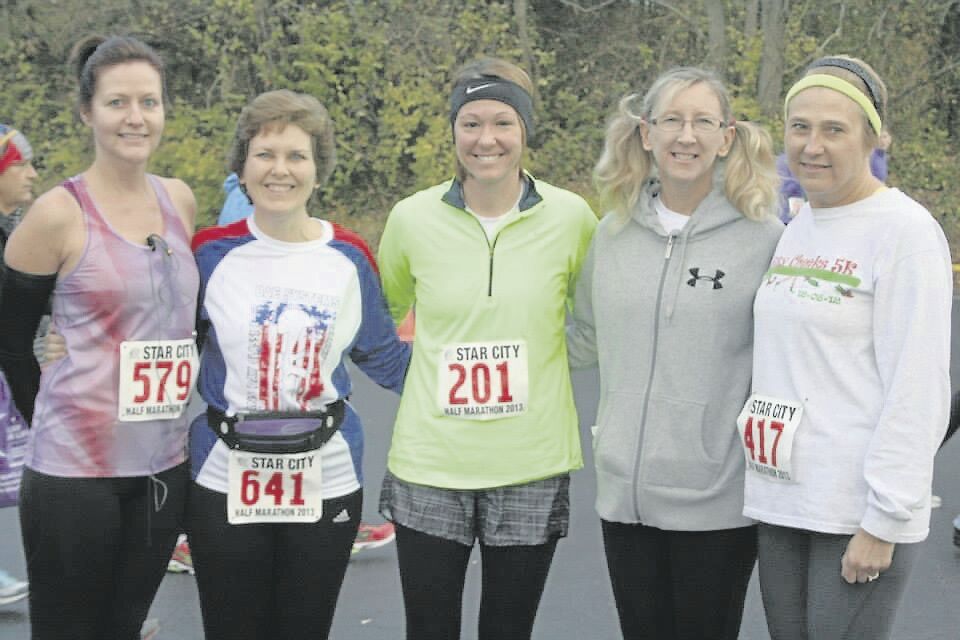 Glenda Scott is shown pictured with her friends at the 2013 Star City half-marathon in Roanoke. Shown from left are Kim Stafford, Anita Wagner, Kristy French, Glenda, and Wendy Morrison.

This just might be one of the hardest stories I have ever tried to write. I want to hit all the high spots while saying the right words at just the right time to keep the story interesting and informative.

On Saturday, Aug. 28, the Bland County Board of Supervisors and Bland County Fair Association are sponsoring the Glenda Scott Memorial 5k race and walking event. A children’s one-mile walk will also be held.

Glenda, you see, is my wife. Not was, but is. That will never change despite the fact that she passed away on July 6, 2020, at the age of 55 from a brain disease diagnosed by Duke Neurology as Frontotemporal Degeneration. Our 34th wedding anniversary will be on Aug. 30.

Glenda was officially diagnosed early in 2017 and told by doctors at Duke that her life expectancy could be as little as five years or long as 30 years. That was a hard pill to shallow at the young age of 52. Everything that her doctors told her would happen in fact did. She told the doctors that day that she did not want to live a life where she would burden anyone. Just over three years later, she drew her final breath in my arms and surrounded by the love of her immediate family.

Glenda was a long-distance runner, having taken up the sport in 2011 after meeting long-time friend Anita Wagner of Wytheville. They became members of Sole Sisters, a small running group in Wytheville. Eventually Glenda and Anita met other people that shared their passion for running when Wendy Morrison and Kim Stafford of Wytheville and Kristy French of Bland joined their group.

“I met Glenda when some local girls started Sole Sisters in 2011,” Anita said. “The second time we got together, there were only four of us. I had been running for over 20 years and I almost always ran alone. Once meeting Glenda, it was the beginning of a wonderful friendship.”

Glenda would meet up with Anita, Wendy, and Kim most mornings in Wytheville and they would run for the fun and exercise as well as training for upcoming races that ranged from 5k’s to full marathons. Following their morning runs, Glenda would go to the Wytheville Recreation Center where she would shower and prepare herself for a day of teaching fifth grade at Sheffey Elementary School in Wythe County.

“Glenda, Anita, and I began running together on a regular basis in 2013,” Wendy stated. “I always wanted to finish our runs on a full mile. The math teacher in Glenda used to tease me that she could teach me decimals.”

When not running in Wytheville, Glenda and Kristy could be seen running the streets of Bland. Anytime Glenda had the chance to put on her running shoes, she was in her element. Knowing Glenda’s love of cupcakes, Kristy would occasionally make her cake pops or bring her other things to satisfy the sweet tooth.

“Glenda was a joy and delight to be around,” Kristy said. “She was so loving and encouraging with her words and actions. We were the ‘Bland’ girls in our running squad. I miss our runs, laughs, and all the sweets.”

Our son Todd and his wife Ami also took up the sport and ran many events with her, most notably the Yuengling Shamrock half-marathons in Virginia Beach. They often think back to reflect on those special times “we had with Mom.”

Glenda ran well over 60 races in her career until the disease cut her hobby short. Her last event was in 2018 at the July 4 In God We Trust 5k that the Bastian Union Church sponsored each year. Unable to run, her friends walked the distance with her.

Glenda’s career carried us to many places as she ran races in Cincinnati, Hilton Head, Nashville, Allentown (PA), Virginia Beach, Huntington (WV), Black Mountain (NC), and Roanoke to name a few. She competed in two full marathons and 18 half-marathons. In shorter races, she placed in her age group several times, winning trophies that are displayed right here in this office as I write this feature. All of her medals hang on the wall right behind me.

“I ran Glenda’s first half-marathon with her at Marshall University in 2011 and her first marathon in Pennsylvania in 2014,” Anita recalled. “We sure had fun adventures with our running and our travels.”

I personally saw the physical strength of his woman many times but especially when she broke her foot on the sixth mile of the Pulaski Fresh half-marathon in 2012. Believe it or not, she finished the final seven miles and when I saw her coming in, I knew she was hurt. Two weeks later, she courageously hobbled around on crutches through the sand at Folly Beach in South Carolina; going to the beach was another one of Glenda’s simple pleasures of life.

Glenda was passionate about the sport that she had discovered, never missing an opportunity to compete against other runners, whether the field consisted of 25 runners or 10,000 as many of the larger events did. Her favorite race was the Blue Ridge Foot Levelers half-marathon in Roanoke. She was quite fond of the Rock-n-Roll half-marathon in Nashville as well as the Flying Pig half-marathon in Cincinnati, races she competed in one time. She conquered her first marathon in 2014 in Allentown and the second in 2015 in Huntington. Color runs were a big hit with her too.

“Our favorite was the Blue Ridge,” noted Anita. “We always enjoyed the smorgasbord of goodies, the mimosas, the champagne, and the strawberries at the top of Peakwood.”

Wendy also shared fond memories of the friendships that were made by a small group of women sharing this common interest.

“We ran the Blue Ridge half one year,” Wendy remembered. “Glenda and I told Anita and Kim to go on ahead thinking they would wait on us at the top of Mill Mountain, which they did. But Glenda and I didn’t see them so we figured they were ahead of us so we started running faster and faster down the back of Mill Mountain and across the greenway trying to catch them only to find out later they were behind us trying to catch us the whole time.”

Kim was both the adventurer and the race clown on race day, always full of wit and charm. Like the others, she was a great friend that Glenda had discovered.

“We met through Sole Sisters,” Kim said. “I instantly liked her and before I knew it we were running local races together before eventually traveling for larger events. She was so much fun and easy to talk to, to the point of getting lost in conversation with her. Running in the mornings was our time to process things about work or to hash out what was happening on Game of Thrones. The others laughed at us because they had no idea what we were talking about.”

Kim called Glenda a good listener that had a heart of gold but could deliver a sassy comeback if it was needed.

“I think of her often,” Kim said. “There will never be another like her. I believe I could write a book about her.”

Glenda was not one that would seek the limelight but I know that she would be honored that her town and friends thought enough of her to have a memorial race in her honor. Our family and her group of friends are honored as well that she made this much of a positive impact in her community.

“I miss Glenda every day,” Anita stated. “She was a ray of sunshine in my life!”

Members of Paul Looney’s flock at Bastian Union Church know their pastor is rejoicing in the arms of the Lord, but still they mourn for Looney…

The Bland County Administration office is closed until Monday, Aug. 23, because staff members have been exposed to Covid. The office closed Mo…

Glenda was part of the Wytheville-based running group Sole Sisters when she first began running in 2011.

Glenda Scott is shown pictured with her friends at the 2013 Star City half-marathon in Roanoke. Shown from left are Kim Stafford, Anita Wagner, Kristy French, Glenda, and Wendy Morrison.