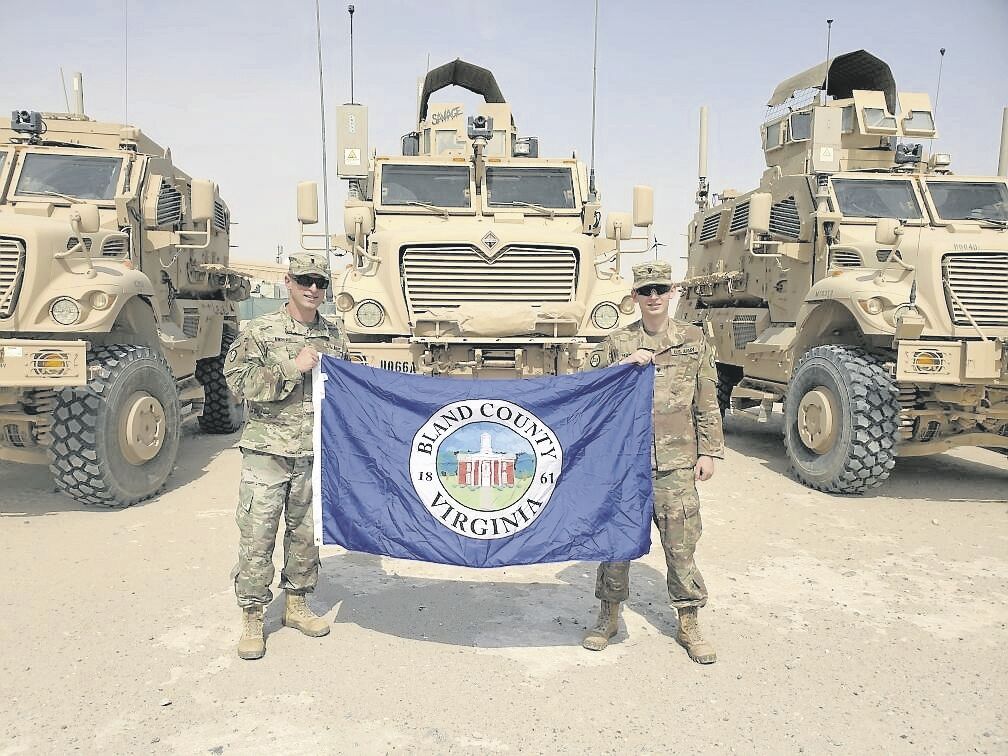 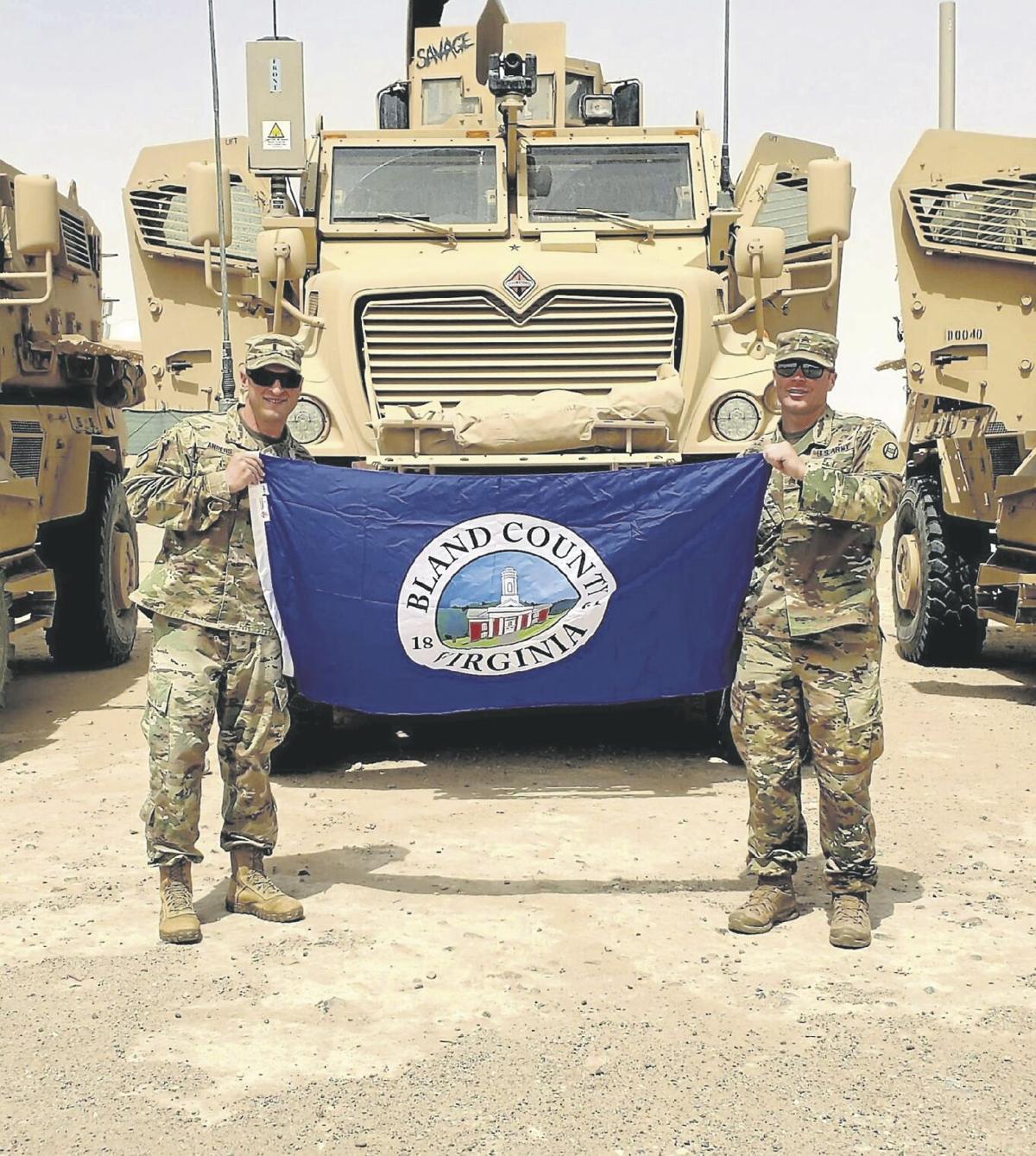 Three local soldiers are happy to be home this Veterans Day. Specialist David Harman, First Lt. Brandon Anders and Sgt. Jeromy Sutphin recently served in the Middle East as part of their service with the Army National Guard.

All three are members of the 1-150th Calvary Regiment, 30th Armored Brigade.

Harman grew up in Bland County and graduated from Bland County high School in 2015. He joined the National Guard soon afterward. When not serving with the Guard, he works at ABB. In late 2019, he left the U.S. to serve in Kuwait and Iraq as an indirect fire infantryman. Harman served for 13 months.

And almost every day, he was concerned that something would happen to him while he was a world away from his family and friends. But, he was lucky.

“It was good,” he said. “Nothing really popped off while I was there.”

Harman, who returned home this fall, is engaged to be married and said that this Veterans Day will be a special one.

“I’m glad to be home finally since I experienced what it’s like to be deployed away from your family and friends.”

Being away from family was difficult for all three soldiers. Both Anders and Sutphin are married with two sons each.

Anders graduate from Bland High School in 2002 and Bluefield College in 2005 with a degree in criminal justice. He soon joined the Bland County Sheriff’s Office and now serves as chief deputy.

He and his wife, Amy, are parents to Jase, 7, and Brady, 3. The family lives in Fort Chiswell.

He was commissioned as an officer in February 2015 and now holds the rank of first lieutenant and commander of Charlie Troop, part of an armored reconnaissance squadron.

While in the Middle East, he was part of a security force for a logistical squad on the Jordan/Syria border. He also served in Kuwait. He spent the first half of his deployment as the executive officer of Charlie troop, and then took command of the group this past April.

Joining the Army National Guard is something he thought about most of his life.

“I was a late bloomer; I didn’t join until I was 30,” he said. “I didn’t want to regret not doing it, so I made the decision to do it. I’ve gotten to do a lot of things in the National Guard that I would not have been able to do otherwise. I fired the main gun on an Abrams M-1 tank during and officer lead course. Not too many people walking around here have had the opportunity to do that. Plus, my children are going to get educational benefits. I’ve gotten to serve overseas. I’ve just fulfilled some lifelong goals.”

The most difficult part of the deployment for Anders was missing his family and not having the opportunity to attend the funeral of his friend Virginia State Police Trooper Robert Boyd, who died this summer.

This Veterans Day won’t be much different for him, he said, particularly when he thinks of soldiers who have deployed numerous times.

“I just did what I signed up to do, so I don’t feel any different,” he said.

Sutphin, a Bland County deputy, and his wife, Courtney, have two sons, Rase, 6, and River, 2. He deployed in September 2019 and was gone from home for 406 days – he counted – that was for more than half of his youngest son’s life.

While in the Middle East, he served in Kuwait, Jordan, Iraq and Syria. He worked as a calvary scout and performed reconnaissance missions, finding the best routes to transport equipment and proving security for convoys and escorts.

A graduate of Rocky Gap High School, Sutphin attended Bluefield College on a basketball scholarship before transferring to Liberty University. He graduated with a degree in interdisciplinary studies.

He joined the National Guard in 2015 because it was something he had always wanted to do.

“Growing up, my dad and my grandfather and other men in my family served,” he said. “It’s something I grew up with.”

He chose the National Guard because it would allow him to serve, but remain in Bland County with his family and friends.

“That’s the benefit of being in the Guard,” he said. “It allows me to have a personal life and join the military and serve that way.”

His favorite part of serving in the National Guard is being a team leader and mentoring young soldiers.

“Whether it’s life questions or how we operate tactically, I enjoy teaching them about being a professional,” he said.

While overseas, he was in contact with his family nearly every day, but he still missed them.

His favorite parts of deployment were interacting with local residents, leading his squad and forming lifelong bonds with his squad members.

“Just being with my guys,” he said. “I think the bond we made just from everybody being away from home, but knowing that we had each other. The relationships we built and seeing the world.”

Veterans Day has always meant a lot to Sutphin, but this year will mean a little bit more, he said. He plans to spend time with his family and maybe have a cookout.

“I will spend time with my family; that’s the only thing I ever plan on doing since I’ve been home,” he said.