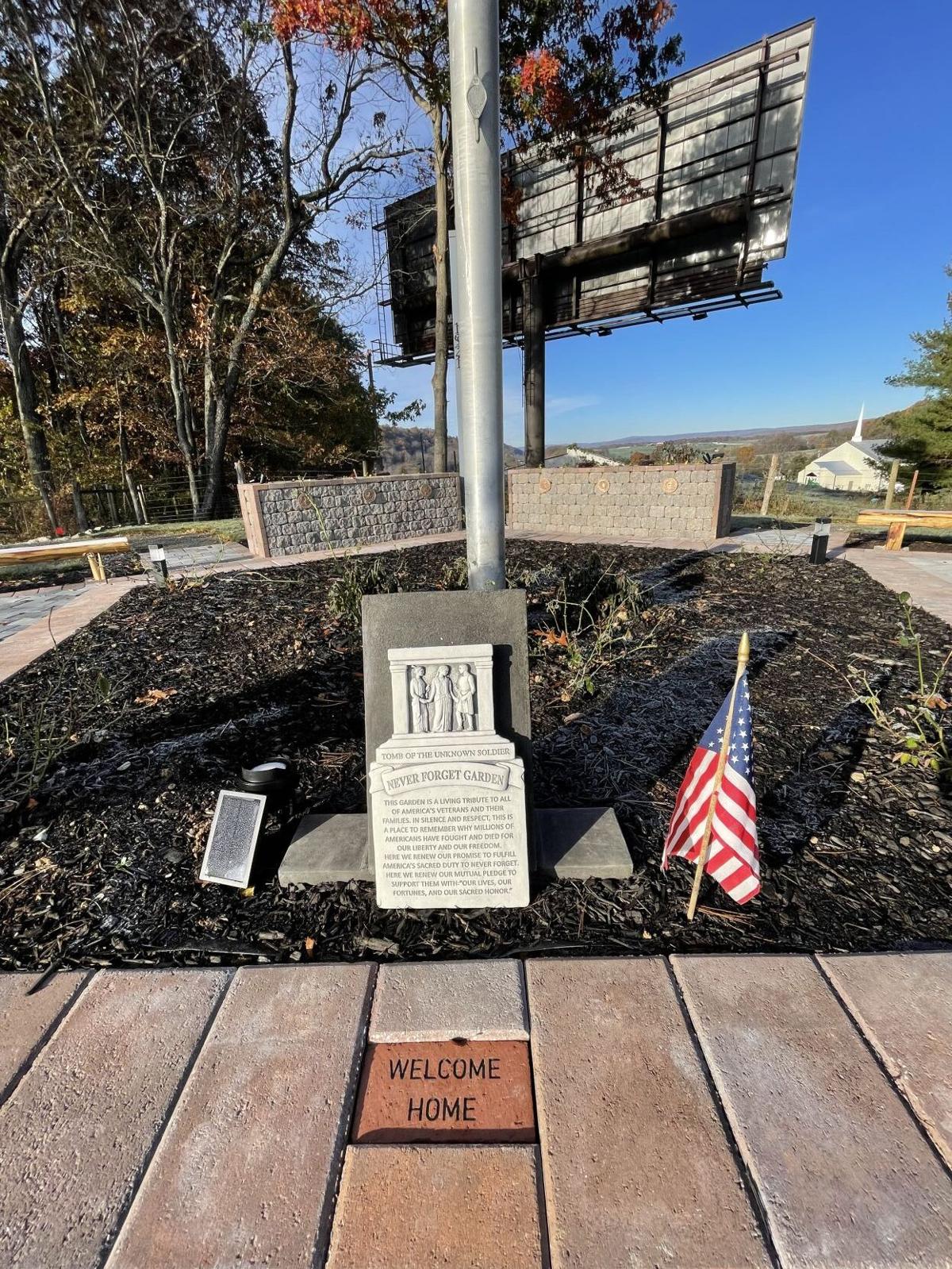 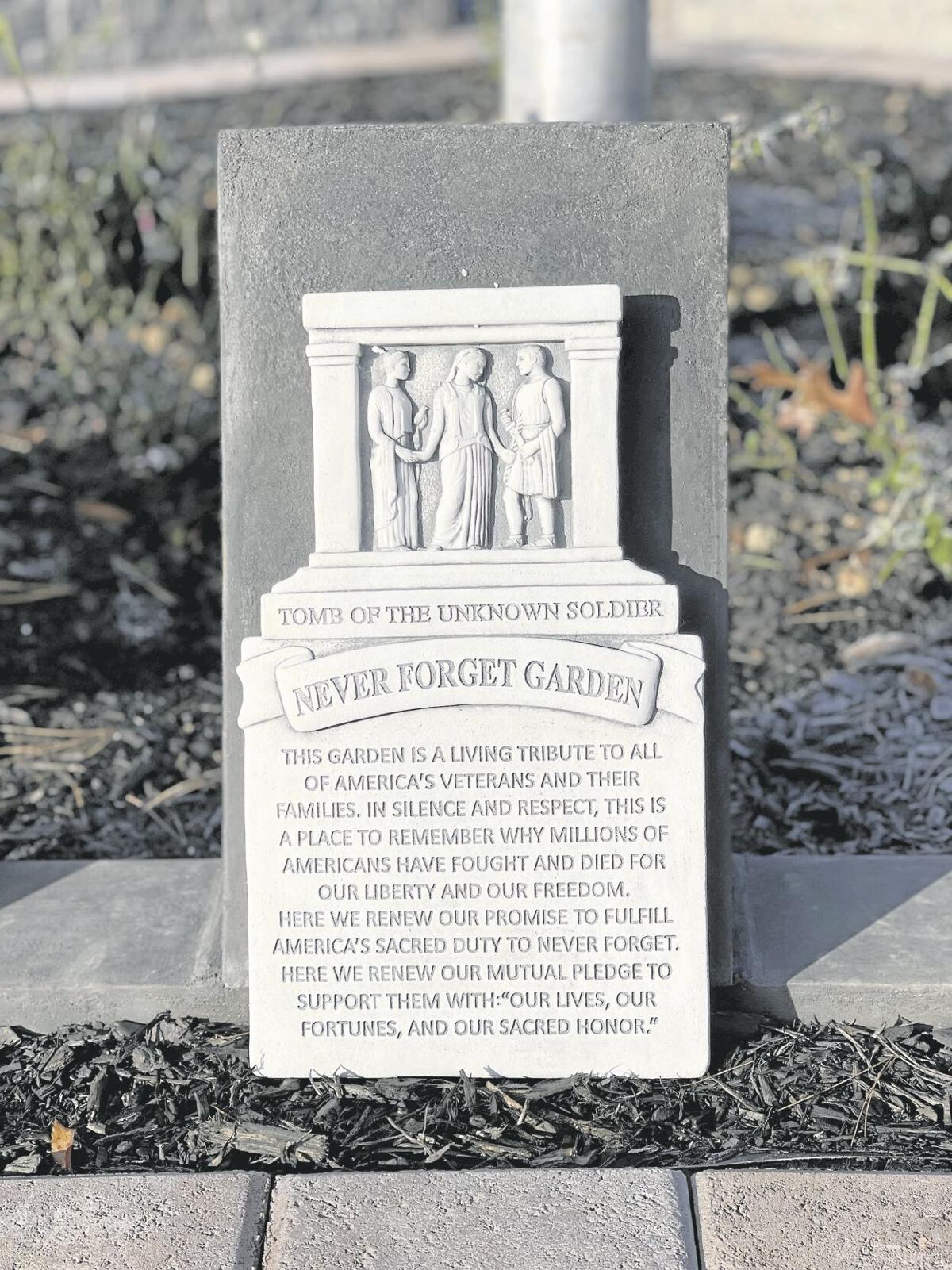 The idea of a Never Forget Garden began last Christmas when Wayne Shutt received this plaque from his friend who once guarded the Tomb of the Unknown Soldier. The Greek figures on the plaque are identical to those on the Tomb and represent peace, victory and valor.

This Veterans Day, Life Changers Christian Center will dedicate a special garden to honor veterans across the country. To celebrate the Tomb of the Unknown Soldier’s 100th anniversary Thursday, the center has created a Never Forget Garden to ensure that the millions of America’s war dead are forever honored and remembered.

At the garden, there are flowers, plants and cedar benches on which to sit, along with a Tomb of the Unknown Soldier/Never Forget Garden plaque. The church also plans to have areas where garden visitors can plant a flower or plant in memory of a loved one.

In addition to the Never Forget Garden, the church is building a walking trail around the church property. The .7-mile trail is called The Peace Trail and should be complete sometime next summer.

The garden was the idea of Bland County resident Wayne Shutt, who was gifted last Christmas with a plaque from his friend, Richard Azzaro, a former Tomb Guard at the Tomb of the Unknown Soldier. Tomb Guards are hand-picked and rigorously trained to guard the tomb, which was established in 1921. Azzaro guarded the Tomb in the early 1960s.

The tomb is the final resting place for the World War I Unknown Soldier. Two crypts hold the remains of unknown soldiers that represent World War II and the Korean War; an empty crypt honors the nation’s missing soldiers.

According to Shutt, one day as Azzaro guarded the tomb, a woman thanked him for guarding the monument and explained that she could not visit her veteran son’s grave, but could come to the tomb.

“He told her thank you and that Tomb Guards will never forget and that he would never forget,” Shutt said. Eventually, Azzaro helped establish the Society of the Honor Guard, whose members guarded the Tomb. The Never Forget Garden is one of the society projects to help celebrate the Tomb’s centennial.

Originally, Shutt asked Life Changers to display the plaque at the center with a flagpole and some flowers.

“It started as a flagpole with a plaque and grew from there,” Shutt said as stood in the garden. “Next thing you know, we’ve got this.”

From Shutt’s simple idea grew a garden that would have cost $100,000 or more if the center had contracted to build it, Lowe said. One church member designed the pentagon shaped garden; other members donated money, time and materials.

“Donations started pouring in,” Lowe said, adding that the garden construction started in June and will be completed this weekend.

“A grower in South Carolina is allowed to propagate them and grow them,” Lowe said. “Genetically, they are copies of those roses.”

“It was given to the project by family members of those who served in the battles,” Lowe said. “It has been put in an undisclosed location, but people who come there can be rest assured that we have sand from the beaches of Normandy and Iwo Jima. There is a lot of history tied to this thing, for sure.”

Lowe said there has been an outpouring of support and supplies for the garden project.

“It’s become a labor of love, for sure,” he said, adding that the result is unique and inspiring. The vison is to have a place for people who cannot travel to Arlington, or perhaps have a missing family service member or a family member buried on foreign soil to be able to sit in the garden, reflect and never forget.

“Hopefully, it will last for generations and give people a place to come and sit and reflect,” Lowe said.

Life Changers Christian Center, 2010 West Ridge Road, will dedicate its Never Forget Garden on Nov. 11 at 10 a.m. The ceremony will mark the 100th anniversary of the Tomb of the Unknown Soldier. The ceremony will include a 21-gun salute and a color guard presentation of colors. Music will include Taps, bagpipes to honor fallen heroes and the National Anthem.

One is a bluegrass guitar picker; the other is a classically trained jazz pianist and graduate of a renowned music conservatory. Theirs is an …

No one was injured, but property was damaged in a Monday morning fire at an award-winning Bland County resort.

A jazz trio entertained inside a heated tent as the crowd waited for the governor to arrive. There was wine, and a charcuterie board covered a…

For close to two years, Covid has marched through the world, making life difficult for all of us. Nearly everyone has been touched by the viru…

If you are curious about what is happening inside Wytheville’s Millwald Theatre, Saturday is your day to find out. From 4 to 6 p.m., there wil…

It’s the time of year when members of Mechanicsburg Christian Church prepare for a mission trip to an orphanage in Bolivia, where they help ma…

The idea of a Never Forget Garden began last Christmas when Wayne Shutt received this plaque from his friend who once guarded the Tomb of the Unknown Soldier. The Greek figures on the plaque are identical to those on the Tomb and represent peace, victory and valor.