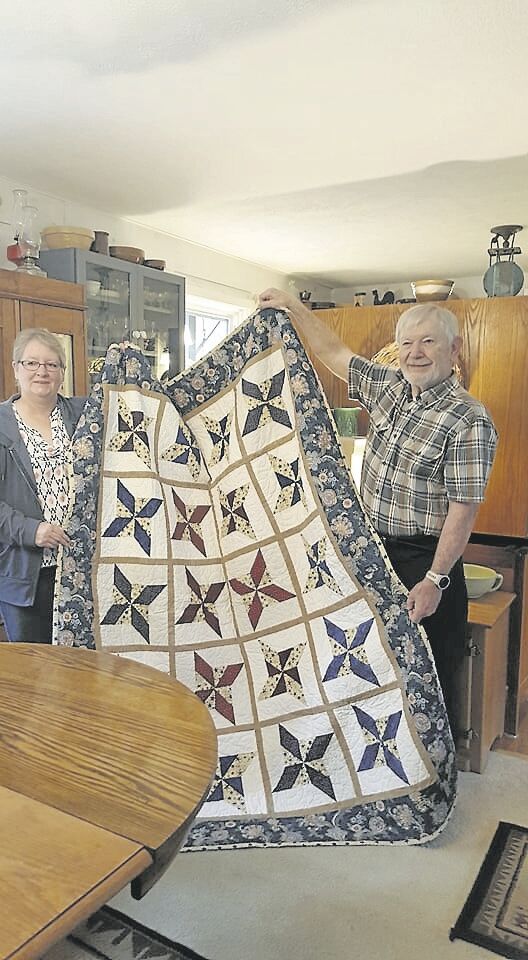 Tommy Poole and his wife, Barbara Meadows-May, with his Quilt of Valor. 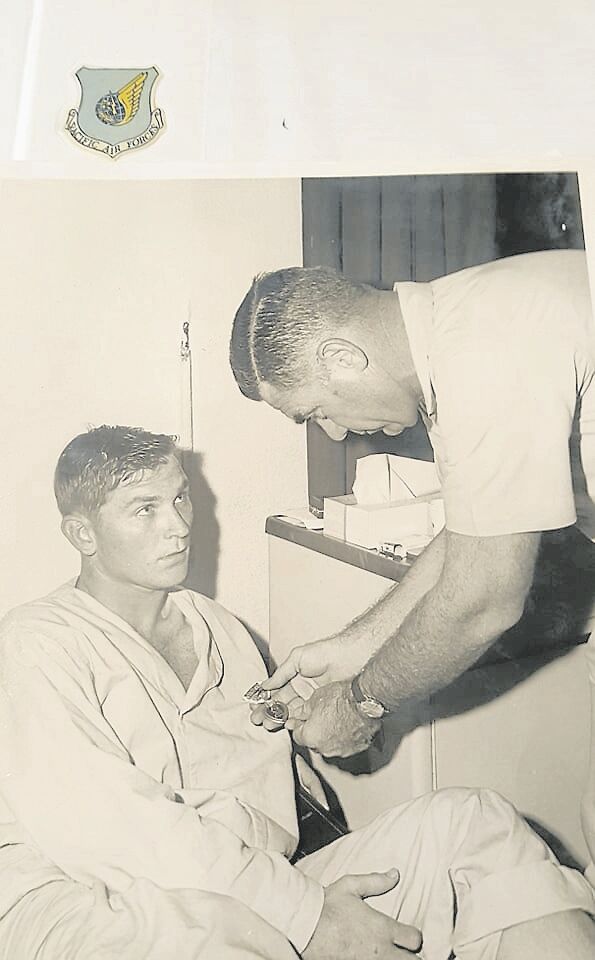 Tommy Poole received his Purple Heart in a field hospital in Saigon, Vietnam. Here, the base commander pins it on Poole’s shirt. 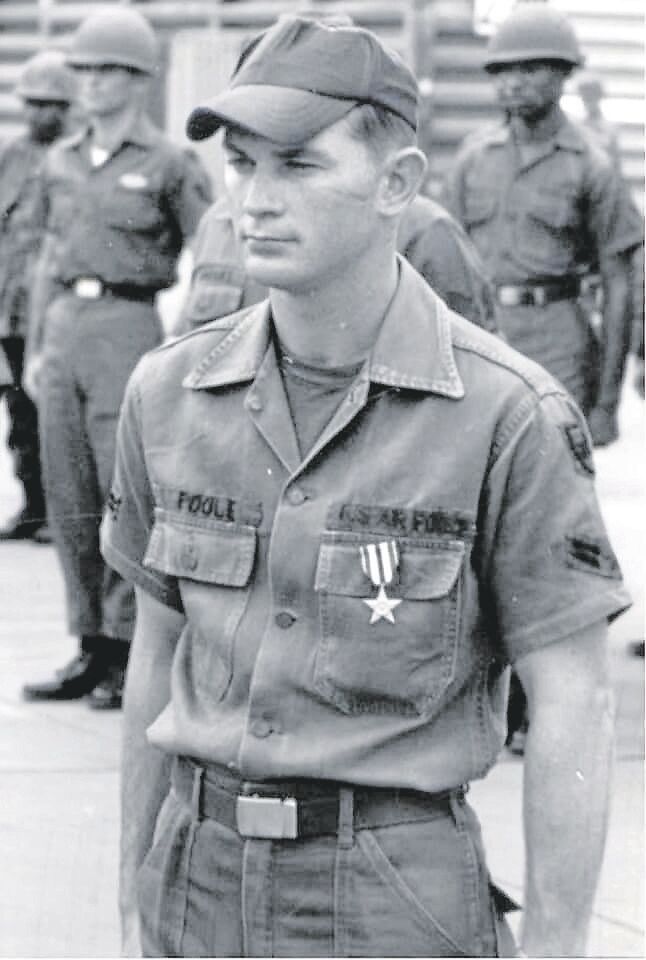 A Little Creek Air Force veteran has received a coveted Quilt of Valor, a handmade quilt awarded to a service member or veteran who has been touched by war. Tommy Poole received his quilt Nov. 4 from a Blacksburg-based representative of the Quilt of Valor Foundation.

“I feel very, very honored,” Poole said. “It’s a great organization, an incredible organization where all the women do it (make the quilts) on their own time. They do it out of love for the service men they want to honor. It was emotional, and it still sort of is to think about it.”

Poole served in the Air Force for four years, and was a dog handler in the Vietnam War for about one of those years. He and his German Shepherd, Fritz, helped guard the Tan Son Nhut Air Force Base.

Poole said the military needed dog handlers at the beginning of the Vietnam War because officials were not prepared to quickly send soldiers there.

“So, they sent dog handlers,” he said. “We worked the outer perimeters of the bases. We were the first line of defense on the outer perimeters. The enemy was constantly trying to take out the airplanes. They kept trying to get on the base, but they could never get past the scent of the dogs. We would notify the security department and they would run the enemy off.”

On Dec. 4, 1966, Poole was shot as he rushed to save his fellow soldiers when the enemy attacked the base. For his bravery, he was awarded the Silver Star, one of the military’s highest decorations for valor in combat. The citation that accompanied his Silver Star explains how he earned it:

“Airman Poole observed what appeared to be a mortar flash,” the citation says. “Advancing the position, he discovered a mortar with several Viet Cong in the process of launching an attack on the flight line area. With complete disregard for his own personal safety, Airman Poole radioed in their position and then proceeded to fire on the Viet Cong. Although wounded twice, Airman Poole continued to relay valuable information to Central Security Control and only after the attackers had been routed did he report his own injuries. This courageous and aggressive attack against greatly superior odds resulted in the Viet Cong mortar crew abandoning their position. By his gallantry and devotion to duty, Airman Poole has reflected great credit upon himself and the United States Air Force.”

During the encounter, Poole was shot in the face. Injured in action, he received a Purple Heart in addition to the Silver Star. He was eventually transferred stateside, ending his military career where he started it four years earlier - at Lackland Air Force Base in San Antonio, Texas.

“I was only trying to stay alive, but I thought I might help my fellow soldiers,” he said. “I thought they might not get hurt if I knocked out a mortar position.”

Unfortunately, Poole could not bring Fritz home with him. Back then, the dogs were considered surplus military property, so when no longer needed, they were abandoned, euthanized or given to the South Vietnamese military or police. It is estimated that 4,000 dogs were deployed across all four military branches during the Vietnam War and helped save more than 10,000 lives.

The Quilts of Valor Foundation began in 2003 when the organization’s founder, Catherine Roberts, had a dream. Her son, Nat, was deployed in Iraq. Roberts’ story is on the QOVF website:

“The dream was as vivid as real life. I saw a young man sitting on the side of his bed in the middle of the night, hunched over. The permeating feeling was one of utter despair. I could see his war demons clustered around, dragging him down into an emotional gutter. Then, as if viewing a movie, I saw him in the next scene wrapped in a quilt. His whole demeanor changed from one of despair to one of hope and well-being. The quilt had made this dramatic change. The message of my dream was quilts = healing.”

Right now, Poole’s quilt is laid across his dining room table so people can see it.

This winter, he’ll use it to keep warm.

“They told me it was meant to be used,” he said. “And I will use it and enjoy it very much to keep me warm.”

No one was injured, but property was damaged in a Monday morning fire at an award-winning Bland County resort.

A jazz trio entertained inside a heated tent as the crowd waited for the governor to arrive. There was wine, and a charcuterie board covered a…

If you are curious about what is happening inside Wytheville’s Millwald Theatre, Saturday is your day to find out. From 4 to 6 p.m., there wil…

The community will come together on Saturday to remember a longtime Bland County lawman who died last week at age 74.

For close to two years, Covid has marched through the world, making life difficult for all of us. Nearly everyone has been touched by the viru…

With the CDC anticipated to give the green light for children ages 5 to 11 to get vaccinated against COVID-19, local health departments are making plans for distribution. The CDC’s Advisory Committee on Immunization Practices is meeting today to discuss and make its recommendation.

During its October meeting, Smyth County Board of Supervisors agreed to hold a public hearing on establishing a Regional Industrial Facilities Authority with Bland County to further develop Pathway Park in Chilhowie. Bland County’s supervisors are scheduled to discuss the potential partnership at their next meeting.

This Veterans Day, Life Changers Christian Center will dedicate a special garden to honor veterans across the country. To celebrate the Tomb o…

Tommy Poole and his wife, Barbara Meadows-May, with his Quilt of Valor.

Tommy Poole received his Purple Heart in a field hospital in Saigon, Vietnam. Here, the base commander pins it on Poole’s shirt.