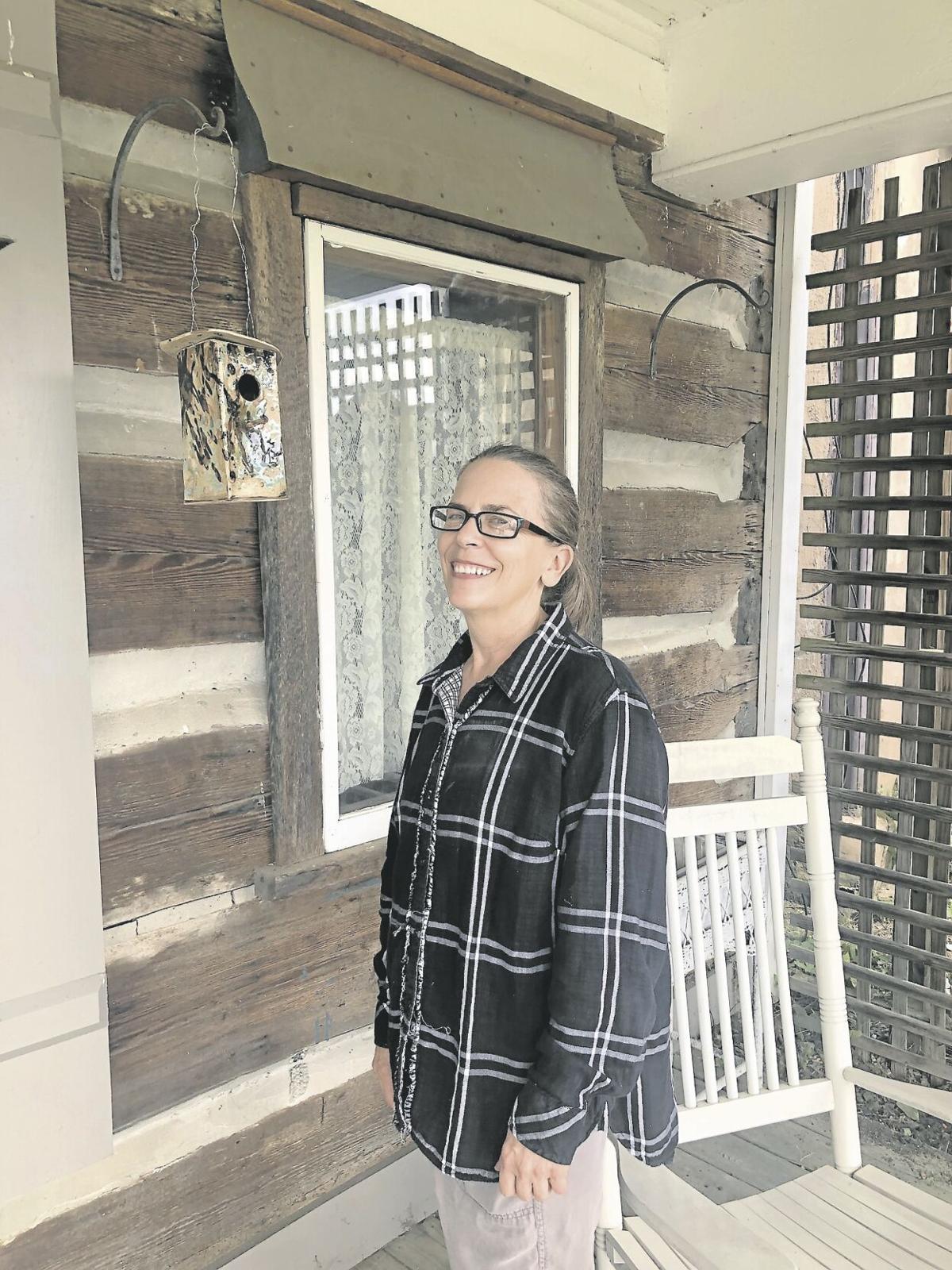 Laura Abbey made the ceramic birdhouse that hangs outside her Wytheville home. 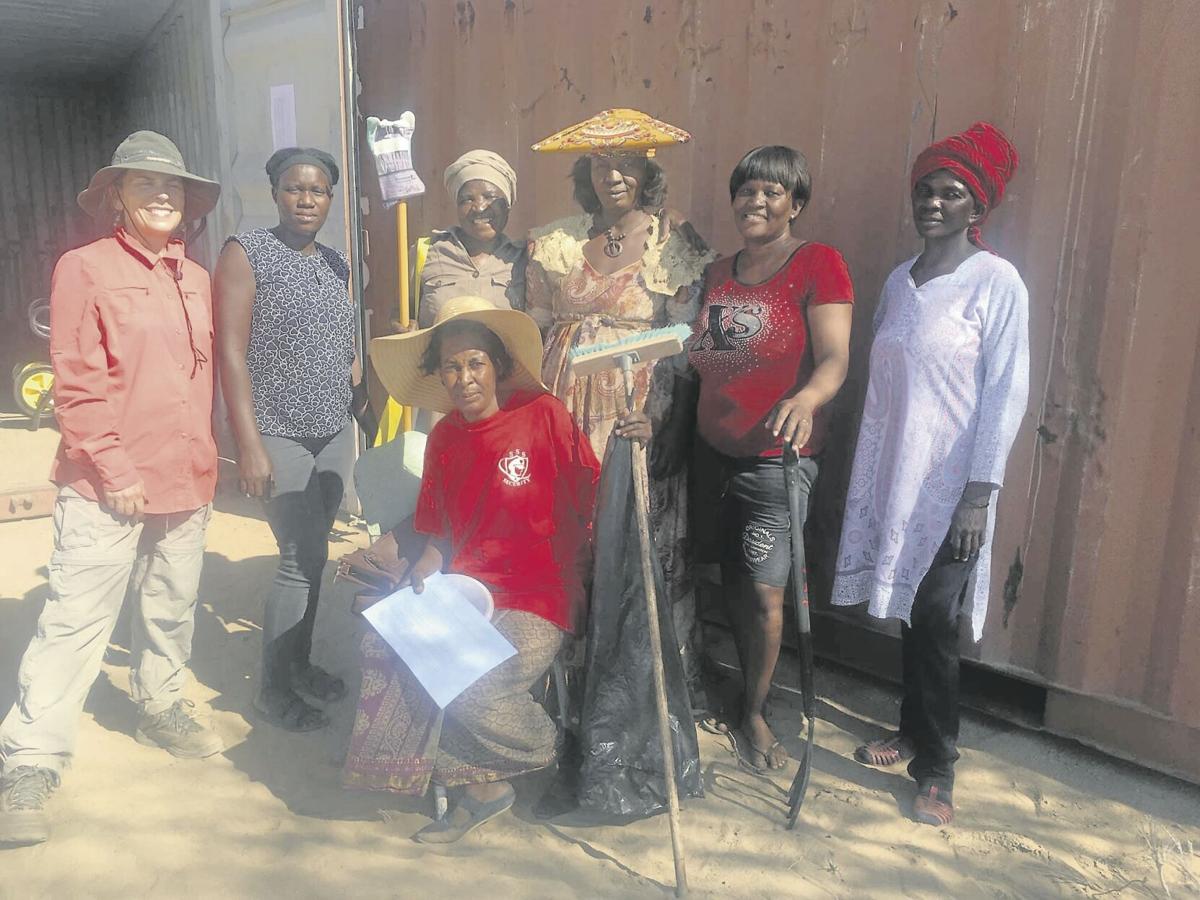 Laura Abbey, far left, with her gardening group in Namibia.

Laura Abbey has big plans for her new home on Wytheville’s Main Street.

The main floor of the two-story home across Fifth Street from St. Mary’s Catholic Church will become a combination pottery studio and folk art gift store. She will live on the second level of the 150-year-old log house.

A native of Bluefield, West Virginia, Abbey named her business Laurel Creek Pottery after the creek in Bland County. While she renovates the Wytheville home, she is living in Bastian.

The path to Wytheville has been an interesting one. For more than three decades, she worked in New Jersey as an accountant and in management.

Several years ago, as life in New Jersey was becoming too fast-paced and too expensive, she began to yearn for a more meaningful career. So she resigned her job and hiked the Appalachian Trail from its beginning at Springer Mountain, Georgia, to its end at Mount Katahdin, Maine.

While on her five-month trek, Abbey had a Skype interview with the Peace Corps, which eventually accepted her for an assignment.

“Since I was a child, I had always wanted to be a missionary, and felt this was a way to serve,” she said.

The Peace Corps sent Abbey to Karibib, an English-speaking town of about 5,000 people in the country of Namibia in South Africa. Unemployment is very high there, and Abbey was tasked with improving community economic development. She held business workshops and applied for grants to help people in the area.

There aren’t jobs for people, so she created some, she said. Among her projects was the creation of a community garden for a group of woman to teach them about sustainable food sources, and a business idea contest, whose winner took home a laptop. His idea was to create and sell jewelry from the gems collected in nearby mines. Many of the gemstones, including diamonds, are shipped off and do not benefit local residents. His idea was to let local residents profit from the mines, too.

Abbey was the first American to ever live in Karibib. She said it took about a year for the townspeople to trust her. Their idea of America mostly came from TV shows like “Keeping up with the Kardashians,” she said, adding that the area had a spotty internet connection.

Abbey was wrapping up her time in Namibia in March when the Peace Corps notified her that because of concerns surrounding COVID-19, she was being sent back to America immediately. She had just a few hours to pack her belongings and did not have a chance to say goodbye to many of the friends she met in Karibib.

“I left a lot of things behind, including things I wanted to give away,” she said. “I didn’t get to see the people I worked with. It was sad, really sad.”

Abbey said her time in the Peace Corps was a great experience, and she’s glad she did it.

“But I feel like people here need help, too,” she said. “I want to find a way to serve in the community.”

Abbey found her new home by accident. She was looking for The Log House restaurant; she planned to inquire about selling her pottery there. Instead, she ended up in the parking lot at St. Mary’s looking at the log house in front of her.

“I thought, it’s perfect,” she said. “It needs some love, but I like the location and the history.”

Abbey hopes to see local artwork in the gift shop.

“So many people make lovely things at home, I feel this is an ideal place to sell it,” she said.

Her pottery studio will be adjacent to the gift shop. She has been a potter for 11 years. At first, it was just a hobby, and then she took some college pottery classes.

Abbey throws pottery on a wheel, but prefers to build her pottery by hand. Hanging outside her home is a birdhouse she made, along with some ceramic wind chimes. Inside, there is a mosaic piece she made using handmade clay tiles.

She recently held a workshop at the Indian Village in Bastian on building spirit rattles by hand. She has another one planned for Oct. 10 at the village. Cost is $10 per person.

When her studio opens, she plans to have open studio hours so people can drop in, buy clay and use her tools to create whatever they like.

“I will help them make it,” she said.

Abbey hopes to have her studio and gift shop ready to open by late November.

Newly eligible people eager to receive their coronavirus vaccine in the Mount Rogers Health District are likely to have a wait on their hands.

See the number of active COVID cases in your Smyth, Wythe or Bland zip code

Reporter's note: Because zip codes can be shared between counties, zip code totals may not match county totals.

Southwest Virginia health districts move to Phase 1b of vaccination, community partnerships to help with rollout

Health districts in Southwest Virginia moved into Phase 1b of vaccination distribution on Monday, expanding the number of people now eligible …

Since the early days of the COVID-19 pandemic, Smyth County Sheriff Chip Shuler has said he’d be first in line to get a vaccine once one becam…

Laura Abbey made the ceramic birdhouse that hangs outside her Wytheville home.

Laura Abbey, far left, with her gardening group in Namibia.