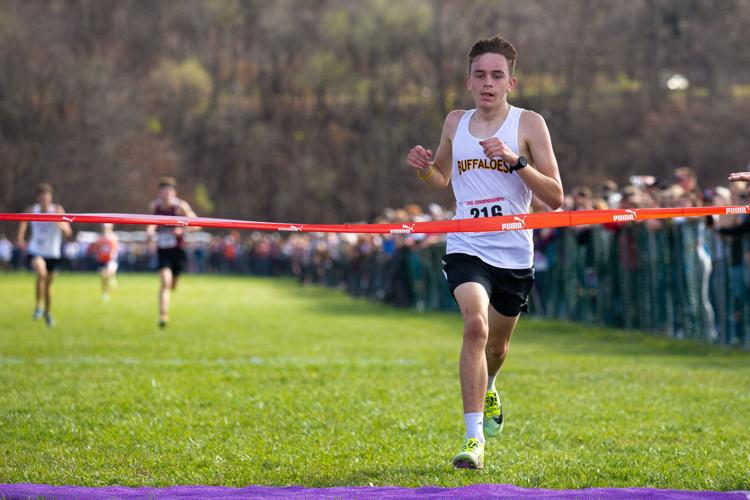 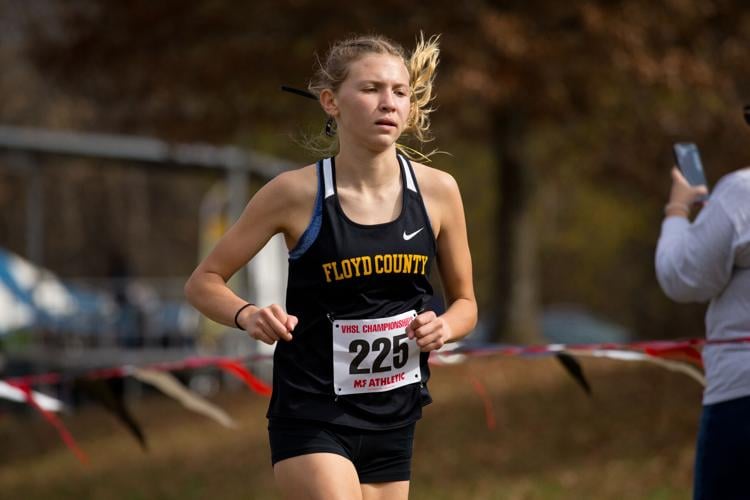 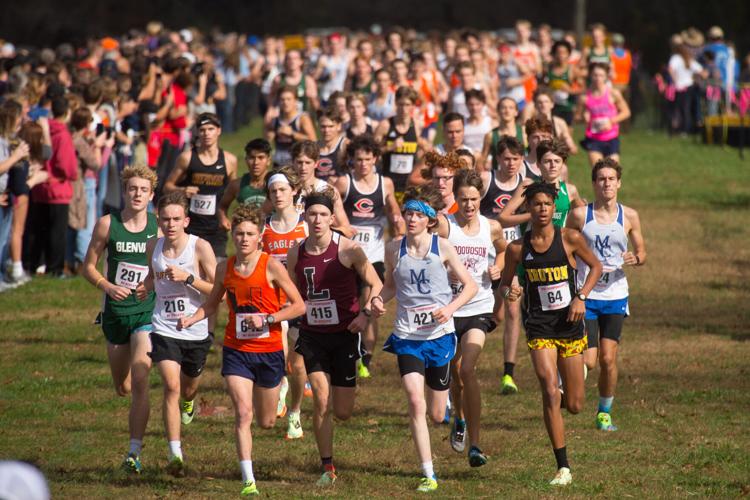 Runners compete in the Class 2 boys race during the VHSL cross country state championships at Green Hill Park on Saturday in Salem.

This is the second consecutive year the Buffalo Cross Country teams made it to the state matchups, and members of the team received additional honors.

Both teams finished first overall in the regional matchups on Nov. 3.

Floyd sophomore Mason Erchull finished first in the boys’ 5,000-meter race with a time of 16:33, among 101 competitors. He also took first in the regional race.

Coach Hannah Belshan Altizer said in a meet wrap up on Nov. 15 that Erchull’s win is “the first time since 1995 (Ben Cooke) that Floyd County has won an individual cross country title.”

Garrett Weaver finished a minute later in ninth place with 17:30. Both he and Erchull received All-State honors, which coach Altizer said is the first time two boys from Floyd County have done so since 1999.

Eleven schools were represented in the girls’ race, and Reagan Lynch was the first to finish among Floyd’s athletes. She placed 16th of 94 with a time of 21:29. Coach Altizer noted Lynch was one spot away from receiving All-State honors.

The girls finished third overall after losing a tiebreaker with Clarke County.

Coach Altizer took on the Cross Country program alongside head boys coach Zane Moran in the spring of 2021. She said that while the season came with its challenges, including losing five top runners to graduation in the spring, “it was still a very rewarding season.”

Athletes’ hard work, determination and winning mentality throughout the 2022 season resulted in “one of the most successful seasons in program history,” Altizer said. “This was the best season we have ever been a part of as coaches…”

Truist Bank has announced the planned closure of its Bland branch in March 2023.

In multiple circumstances, resident have cited noise as a community or neighborhood problem.

Organizer plans "A Christmas to Remember" on Wytheville's Main Street

Thanks to a great turnout last year for the inaugural event, this year’s Christmas to Remember celebration will be even bigger and better this year.

Heading toward its 97th year in 2023, the Bland County Fair is one of the oldest – if not the oldest – county fairs in Virginia, only a few ye…

A former Wythe County resident is taking You Tube viewers on a drive through time, creating videos and mini-documentaries on a variety of hist…

The subject of a Pulaski manhunt earlier this month will go before a Smyth County judge in February, where he stands accused of stealing a tru…

After a nationwide search, the Town of Wytheville has hired a new museum director to replace longtime director Frances Emerson, who retires ne…

Davis named Co-Coach of the Year

Floyd’s state champions were recently recognized both individually and as a team at the annual Roanoke Valley Golf Hall of Fame Banquet.

Runners compete in the Class 2 boys race during the VHSL cross country state championships at Green Hill Park on Saturday in Salem.