Bill Turman’s 32-year career in animal control left a mark on the community that won’t soon be forgotten by his peers.

Heading Smyth County’s Animal Control as its chief from 1987 until his retirement in 2019, Turman saw the profession evolve from a one-man gig in a small cinderblock building on Saint Clair’s Creek  to a five-officer, three-shelter attendant outfit that watched its euthanasia rates drop dramatically and helped untold numbers of animals find homes over the years.

Turman’s “work family” also credit the longtime chief as the man who brought the region up to speed with best animal control and shelter practices, set standards and led by example within his department, and became the go-to guy for any and all things animal related.

Turman died earlier this year, leaving behind a legacy of compassion and friendship to both man and animal. To honor his hard work and dedication, Turman’s work family has launched a campaign to raise funds for a memorial bench to be erected outside the shelter.

“He dedicated his life to the service of the citizens of Smyth County and he needs a place to be remembered for that,” said Animal Control Officer Jason Mash. “And, I’d love the opportunity to have the reminder of the boss he was outside the building every day I come in.”

Turman came into animal control after a four-year stint as a police officer in Chilhowie. “But that wasn’t where his heart was,” Turman’s wife, Darlene Turman, said. “He loved the animals.”

During his time with the police force in Chilhowie, Turman, who’d grown up on a farm, filled in when animal control’s then-chief was out. When that chief retired, Turman stepped in, juggling the duties of both positions for a couple of months before the animal control job came open full-time.

At the time, the animal shelter was housed in a small building on Saint Clair’s Creek Road capable of only holding 10 to 12 dogs. When it came time for a new shelter to be built in 1995, Turman was front-and-center, helping to figure out the best layout to help the still-small operation run more smoothly.

During Turman’s earlier years with the department, Mash said Turman was integral in bringing up-to-date animal control practices to the region and continued to do so throughout his career.

“Bill was a pioneer for it in this end of the state and stayed on top of training, went to where the training was offered, brought it back, and made sure all the officers under him were trained properly. I don’t think we’d see animal control like it is in this region if it wasn’t for Bill.”

In addition to keeping his officers well-trained and versed in changing animal control laws, Turman also often played a role in helping to form laws, offering perspectives on how things might or might not work, what could be improved, and communicating what needed to be done, Mash said.

Likely one of Turman’s most applauded accomplishments, though, was his work in decreasing euthanasia rates at the shelter.

Linda Bridgeman, a shelter attendant who worked with Turman for 16 years and volunteered with the Smyth County Humane Society prior to that, recalled that in the earlier days of their careers, “Euthanasia was so much higher. Nice, friendly dogs had to be put down. There just wasn’t anywhere for them to go and we didn’t have enough adopters.”

Through building relationships with a number of rescue groups, Turman helped give animals a better chance at finding a home.

“That was something that Bill felt really strongly about was working with the rescue groups… It was something he saw that would get more of the animals out the front door instead of having to be put down.”

Sherri Henderson, another shelter attendant whose father worked with Turman early in his career, said Turman was known to hold the animals for a few extra days so the rescue groups could retrieve them. Not one to want to rip animals from loving homes, he was also known to help people find the resources they needed to keep their pets.

“I remember Bill going out and buying people dog food and cat food to keep from taking their animals,” Henderson recalled.

Everything Turman did, Henderson said, “was all in hopes of helping the animals, whether it be spay/neuter or hopes of finding a home.”

More than a few times, animals found their home in the Turman household.

“It’s hard to tell how many animals Bill took home over the years as his personal pets,” Henderson said.

“The one I have now came from the shelter,” Darlene Turman said. “She kind of adopted him and then he adopted her.”

Turman passed that animal-loving gene to his children.

“They would go down there and see something and it was, ‘Please, Daddy, can I have this,’” she said.

Once, when his oldest daughter was 15, she volunteered at the shelter.

“He told her that very first day, ‘don’t be picking out a dog to come home with you today,’ and then she brought a dog home with her that day.”

“He just loved animals and he wanted to save them all,” she said.

Beyond his accomplishments at the shelter and with the animals it housed, Turman’s family and work family remember him for his compassion, friendship, warm-heartedness and fun-loving personality.

“He was just one of those once-in-a-lifetime bosses that was like family,” Henderson said. “If anybody, any of us, needed anything, he was there. It didn’t matter what. Bill was a teacher, a mentor, everything. There’s not one person at the shelter that felt any different.”

“I called him my gentle giant,” Darlene Turman said. “He had the biggest heart and was so kind and loving to everyone. This community knew that if they needed anything they could count on Bill. There’d be people come here to the house to get advice from him and he would help anybody with anything they needed. He was just a good man.”

On the job, Mash said Turman wasn’t just a boss, but a true leader.

“It was never, ‘I’m the boss, I’m in charge, we’ll do it this way.’ It was, ‘you have an idea? Let’s hear it.’ Or, ‘how can we do this better?’ That’s the kind of boss that I think anybody should strive to be. Anybody that’s in leadership or potentially would move into leadership down the road could have learned a lot from the way Bill done things.”

Though he was the man who oversaw the operation, Turman didn’t shy away from doing the dirty work.

“If he told you to dig a ditch, he’d grab a shovel and be right there with you,” Mash said “He would do anything that needed to be done, work with you in any way he could.”

And if an officer or attendant needed help, “It didn’t matter where it was,” Mash said. “If I was on the road and there was a dog that I didn’t want to deal with or somebody that had given us problems, Bill was jumping in the truck to ride with me.”

“It didn’t matter if he had a ton of paperwork on his desk and so much to do,” Moore added, “if you said, ‘Hey, Bill, I need your help on this call,’—you could call him in the middle of the night—he’d come out and help.”

“He was just such a good person, just a great boss and he seemed to just have a genuine caring for everybody,” Bridgeman said.

Animal control and shelter staff say Turman’s influence has helped shape the way things will be done for years to come.

“I don’t think any of us would be the officers or attendants that we are without the knowledge or overall demeanor that he showed by example every day,” Mash said. “It wasn’t even something you could be taught, it was just something that you picked up by watching the way he done it.”

The crew hopes to carry on Turman’s legacy through their own work. Both Henderson and Darlene Turman noted that he had a worthy successor in current Animal Control Chief Chris Bennett, who worked alongside Turman for around 15 years.

“He trained a good one to take his place,” Darlene Turman said. “He made sure that they were going to be OK.”

Henderson said Turman instilled in the crew to “Just keep trying, save the animals, help the animals. He would always say you can’t fault somebody for caring too much.”

And that’s what they intend to do.

“We hope we can carry on his legacy for many years in his memory—everything that he put in and taught us,” Moore said.

Staff at the animal control and shelter hope to tangibly memorialize that legacy with the memorial bench.

“In a profession that’s often overlooked, I feel like it gives his legacy the chance to shine and be represented and he deserves that after the career that he put in,” Mash said.

Of the memorial, Darlene Turman said, “It just means the world to me and my children. It just makes us so proud and happy they think that much of him.”

Any funds that exceed the cost of the memorial and installation will go to the Turman family.

Donations can be made at The Bank of Marion to the Bill Turman Memorial Fund c/o Jason Mash and Sherri Henderson, or at www.gofundme.com/f/bill-turman-memorial-fund.

The ripple effects of the forthcoming closure of the Bristol, Virginia, landfill have reached Smyth County and its three towns. Thursday eveni…

Already on probation for a 2021 unlawful wounding conviction, a Wytheville man was arrested again on Friday after police said they found drugs…

Board votes to not join rail authority

Next Generation: ‘A great-grandmother and role model’

Grammy was born in Floyd in 1937 and grew up here for a lot of her life. She is a great daughter, sister, wife, mother, grandmother, great gra…

Six positions at Floyd County Public Schools were “absorbed” for the upcoming fiscal year’s budget, which was approved last week.

Just over a month from a massive storm front bringing damaging wind and hail and flooding to the county, another big storm struck on Friday dr…

Experts weigh in on Rhododendron collapse

Die-offs of Rododendron maximum have been reported in several southwestern Virginia counties since 2015, especially along or near the Blue Rid…

The Chautauqua Festival will end June 25 with a performance by Nashville singer/songwriter Allie Colleen. 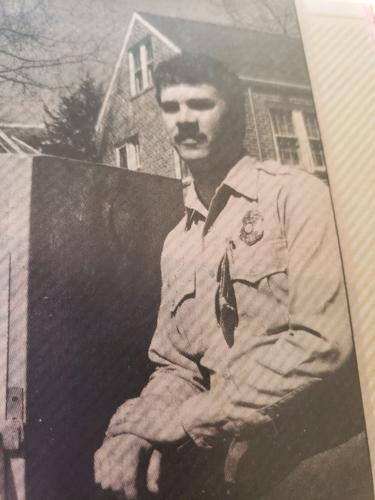 Bill Turman was featured in the Smyth County News when he took over animal control in 1987.

Bill Turman was known to love all animals.