After nearly six years, three cross-country moves, and a combat deployment, Air Force Major Phillip “Bucky” Blevins and his wife, Katie, are home and at work serving the community.

In August, Bucky Blevins took the oath of office to serve as Smyth County’s newest prosecutor, a deputy commonwealth attorney.

While he started to work Monday, Aug. 22, Blevins was already in the courtroom, helping present a case the next day.

He’s not a stranger to the commonwealth attorney’s office.

Blevins interned for Commonwealth’s Attorney Roy Evans throughout his education at the Appalachian School of Law. He reflected, “I always dreamed of being a prosecutor right here in Smyth County.”

Blevins must have made a good impression.

In a news release, Evans said, “Bucky joined my team in the summers of 2014 and 2015.  He was a thorough legal researcher with a passion for the courtroom.  I am excited that Bucky will be joining me full time and look forward to his contributions.”

Graduating from Marion Senior High School in 2008, Blevins said in the release that moving away from Southwest Virginia was the last thing on his mind. “I was born, raised, and educated in Southwest Virginia – leaving was never part of the plan.”

That intention stayed with him at ASL. “Folks go to law school for many different reasons – some dream of living in a big house and driving a corvette. Though, that wasn’t me. I went to law school so I could better serve my community.”

The idea of service has long been part of Blevins’ identity.

He began serving in 2008 when he joined the Adwolfe Volunteer Fire Department. After earning firefighter certifications, Blevins joined the then-Marion Life Saving Crew and became an EMT. He’s still active in today as a Firefighter/EMT at the Adwolfe department and as a Lifetime Member of VFW Post 4667.

Blevins’ idea of service grew during a 2015 visit to Arlington National Cemetery. “The rows upon rows of white crosses left me speechless. I instantly knew God was calling me to serve our Nation,” said Blevins.

In December 2016, he was commissioned as an Air Force JAG (Judge Advocate General).

“Joining the Air Force was never part of my plan. I had always dreamed of coming back home to Smyth County and protecting our community,” he said.

A little over a year later, Blevins was commissioned as a first lieutenant. He spent the first four years of his military career as an assistant staff judge advocate prosecuting Airmen in administrative hearings and military court-martials.

In 2020, then-Captain Blevins deployed to Afghanistan.

“Being in a war zone with hostile fire overhead was an experience like no other. It put life in a new prospective for me and opened my eyes to what I had taken for granted, such as indoor plumbing and being able to hold my wife and son,” Blevins said.

For the last stint of his military career, he served as a criminal defense attorney.  “As crazy as it sounds, being a defense lawyer taught me how to be a better prosecutor.”

Blevins was selected for promotion to the rank of major and offered a one-time $40,000 bonus in exchange for another four years of military service. When asked why he didn’t accept the Air Force’s offer, he said, “I believe in my heart that I’ve been called home.”

Throughout his military career, Bucky Blevins had the support of his wife, Katie. She’s also a Smyth County native, but the couple didn’t meet until they attended The University of Virginia’s College at Wise, where Katie was studying elementary education and Bucky was completing a degree in the Administration of Criminal Justice.

Today, Katie is now a doctor of education and teaches second grade at Chilhowie Elementary and is a professor at Liberty University Online.

The couple has bought a house in Chilhowie and are making a home for themselves and their sons, Noah and Luke. The news release noted, “The Blevins family is thrilled to be home and furthering their call to service.”

Randy Smith left me the oddest voicemail a few months ago. The message started normally but was then broken up with shouts and whoops of excit…

The county’s new EMS agency is expected to answer its first calls Wednesday.

Accused of trading guns last year without doing a required background check, a local state trooper has been charged with a misdemeanor.

The Wythe County Sheriff’s Office confirmed on Friday that a body found in a burned vehicle on Jan. 13 was 59-year-old Ronnie Lee Akers. 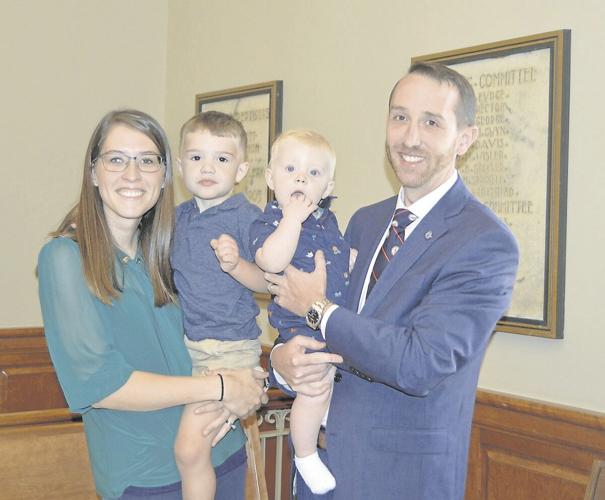 Phillip “Bucky” Blevins’ family supported him Tuesday as he took the oath of office as a Smyth County deputy commonwealth attorney.  From right to left are Blevins, his sons Luke and Noah, and his wife, Katie.