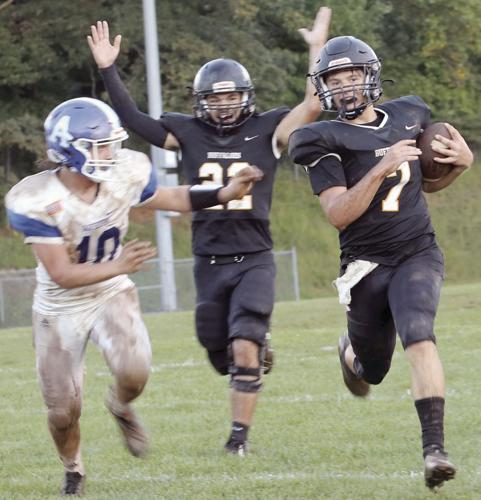 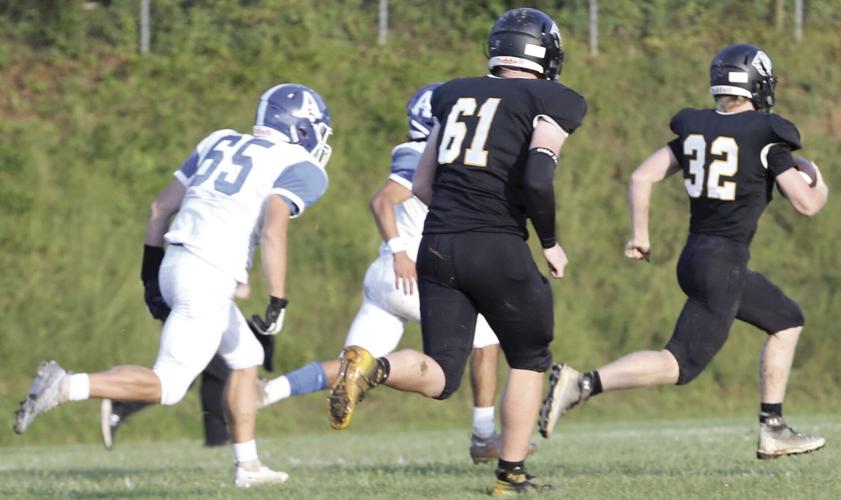 Davis Goff of the Buffs on a big gain that set up a touchdown. 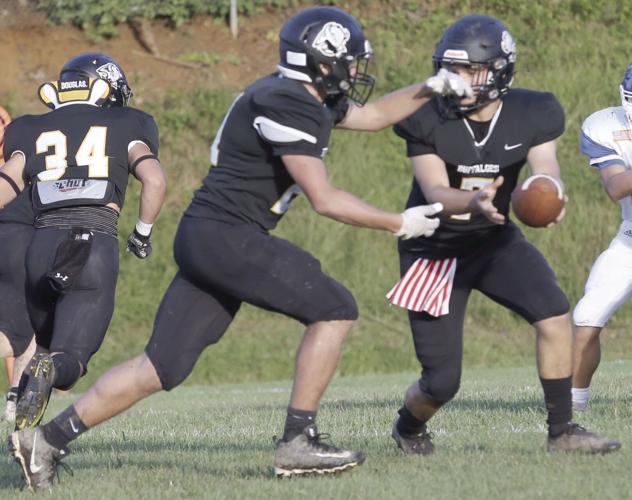 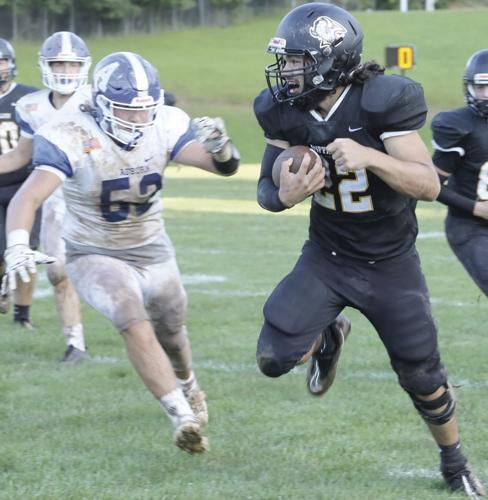 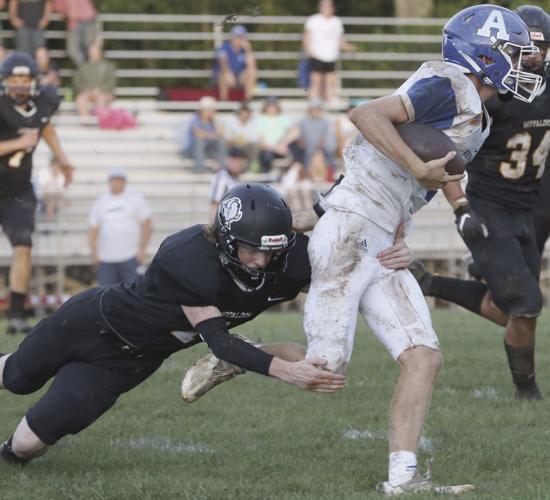 Taylor Deskins brings down Auburn’s quarterback behind the line of scrimmage. 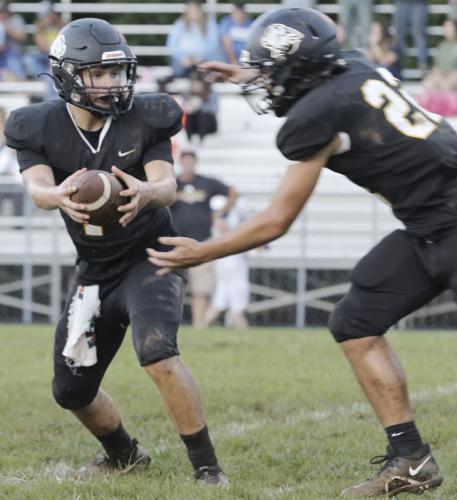 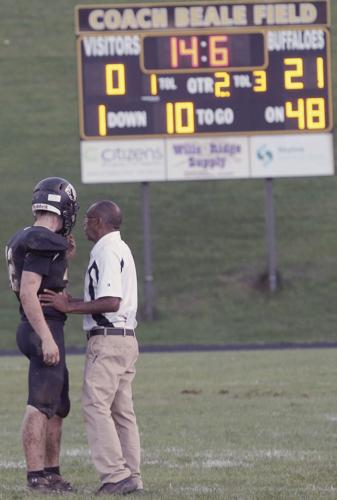 Coach Winfred Beale sends in a play in the closing seconds of the first half with the Buffs leading 21-0. 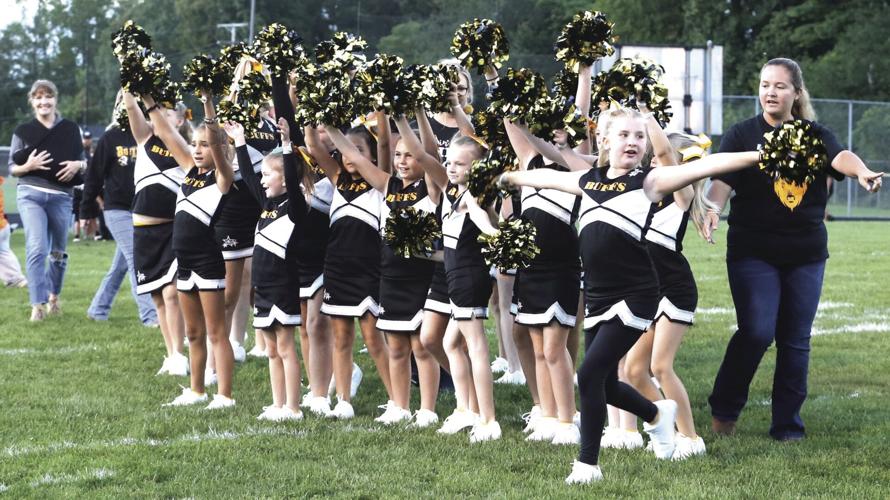 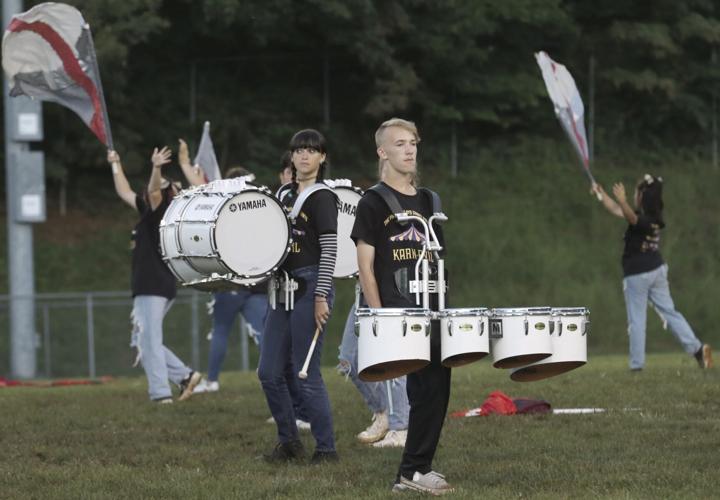 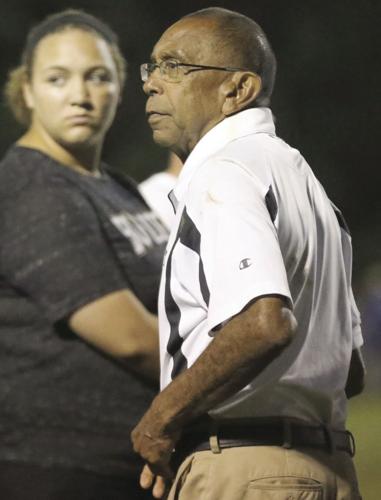 Coach Beale watches a play unfold in the fourth quarter.

By Doug Thompson and Abby Whitt

Twenty-one points were scored before the half on Sept. 8, thanks to interceptions and recoveries by Matt Slusher, three rushing touchdowns by QB Rylan Swortzel, and 146 yards and a touchdown by Trevor Miller.

Thirteen more points were added in the last half of the game. Swortzel ran for 49 yards on Coach Beale Field, while Lathom Barbieri added 90 yards and a touchdown.

The Buffaloes missed just one of its extra points attempts on Sept. 8, and the Buffs hold a 2-1 record for the season.

The Buffs hit the road this week to play Fort Chiswell before have a bye next week before facing Carroll County at home on the final day of September.

In volleyball, the Lady Buffaloes were on the road this week to face Patrick County and play a tournament at William Byrd High this weekend.

The Lady Buffs will face the Christiansburg Blue Demons on the Alan Cantrell Court in Floyd on Monday, Sept. 19.

FCHS golfers have continued their hot streak, and McKenzie Weddle placed first overall on the Great Oaks course on Sept. 9, with a score of 74.

Two golfers, one from Salem and one from Magna Vista followed Weddle with 77.

Ryne Bond and Peyton Mason tied for second place on the Floyd team with 82 shots, and Isaiah Cantrell scored 83.

Overall Sept. 9, the Buffaloes tied for first place with Salem, scoring 321. Magna Vista was three points behind with 324.

Floyd golfers tee-off against James River and Patrick County this week and Radford on Monday, Sept. 19, according to the Three Rivers District schedule.

The Cross Country Buffaloes’ next meet is the Alleghany XC Invitational in Covington on Sept. 24. The Maroon Tide Invitational previously scheduled for Sept. 21 has been postponed.

Dennis Counts sold the family drugstore business to CVS in the spring of 2021 but soon missed being in business.

Wythe County Public Schools Superintendent Wesley Poole was happy to share the news with the county’s Board of Supervisors Sept. 13: WCPS rank…

Last week, Smyth County lost another resident to the mental health crisis that is taking its toll on this country. The Marion resident chose to end his life, leaving behind a family in the depths of pain and darkness.

Del. Marie March, R-Floyd, filed a criminal complaint Saturday against another Republican delegate who is expected to be her primary opponent …

Several events slated for this weekend have been postponed as the remnants of Hurricane Ian reach the area, bringing with it rain and heavy winds.

The Floyd County Board of Supervisors is holding a public hearing later this month to discuss changes to the Music Festival Ordinance. Read th…

It was a “horrible crime.”

The varsity volleyball team started its 2022 season under the leadership of new head coach Kim Weddle, a Carroll County native and member of t…

Local leaders gathered Friday afternoon to break ground on the site, adjacent to George Wythe High School, where the new middle school is to b…

Davis Goff of the Buffs on a big gain that set up a touchdown.

Taylor Deskins brings down Auburn’s quarterback behind the line of scrimmage.

Coach Winfred Beale sends in a play in the closing seconds of the first half with the Buffs leading 21-0.

Coach Beale watches a play unfold in the fourth quarter.