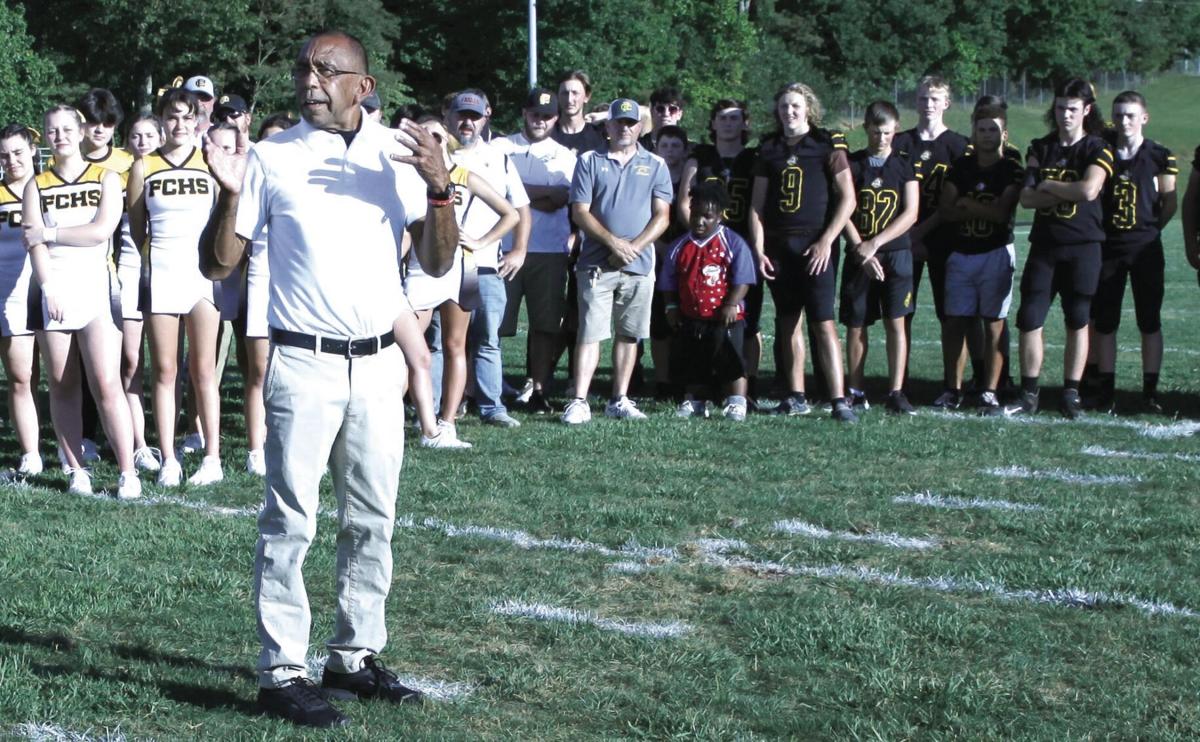 Coach Winfred Beale thanks those who attended and/or spoke to the dedication of the football field. 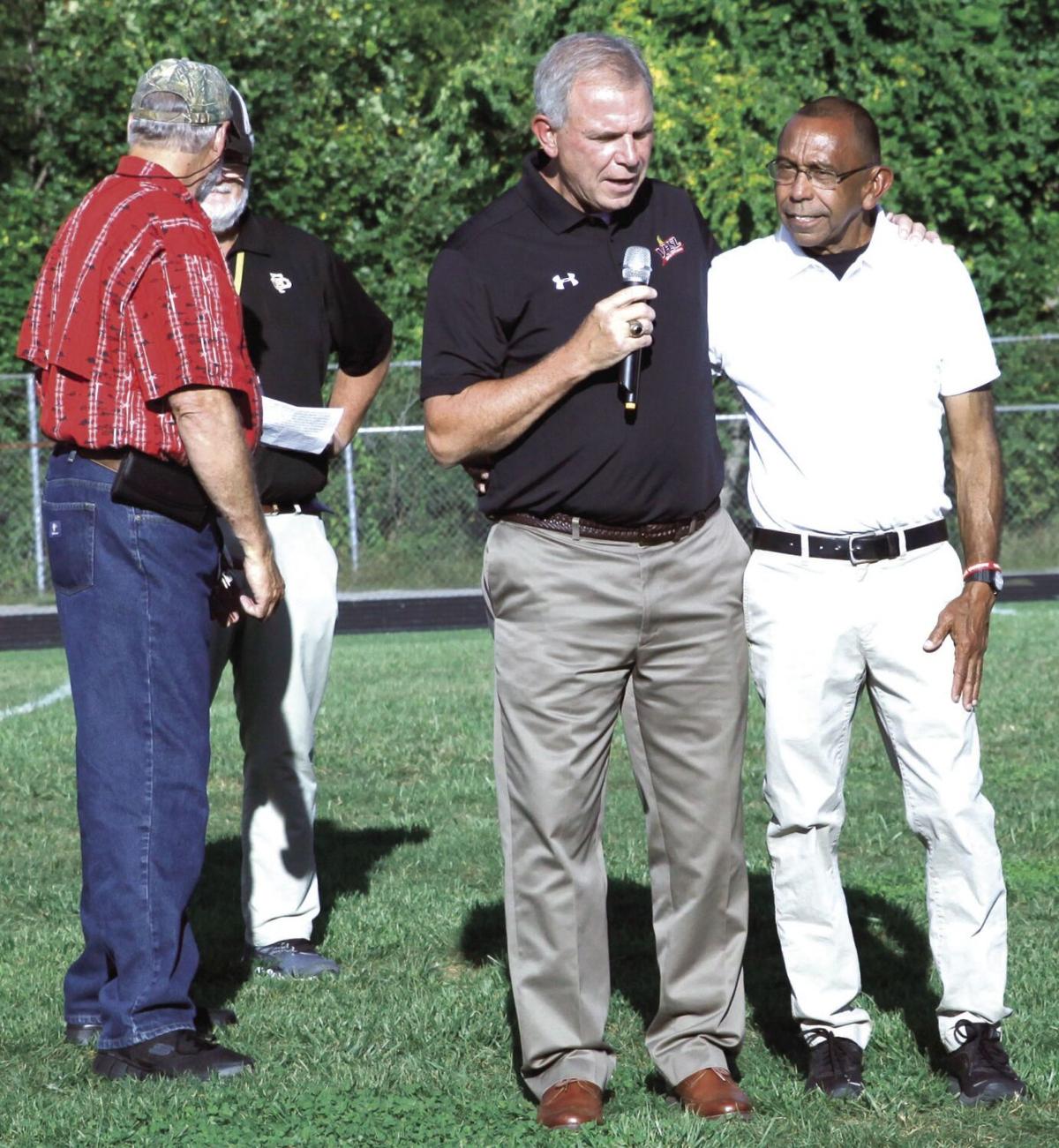 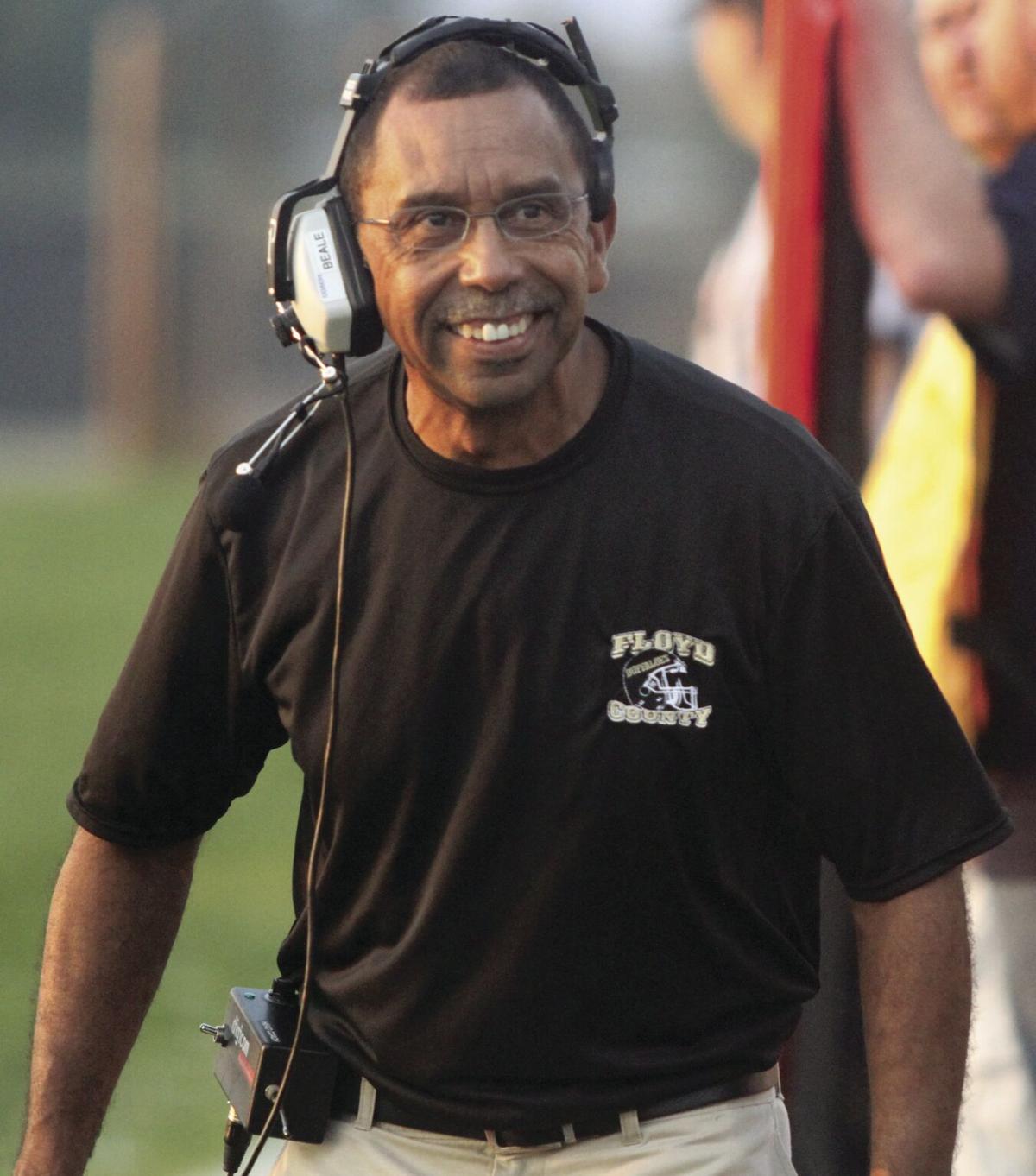 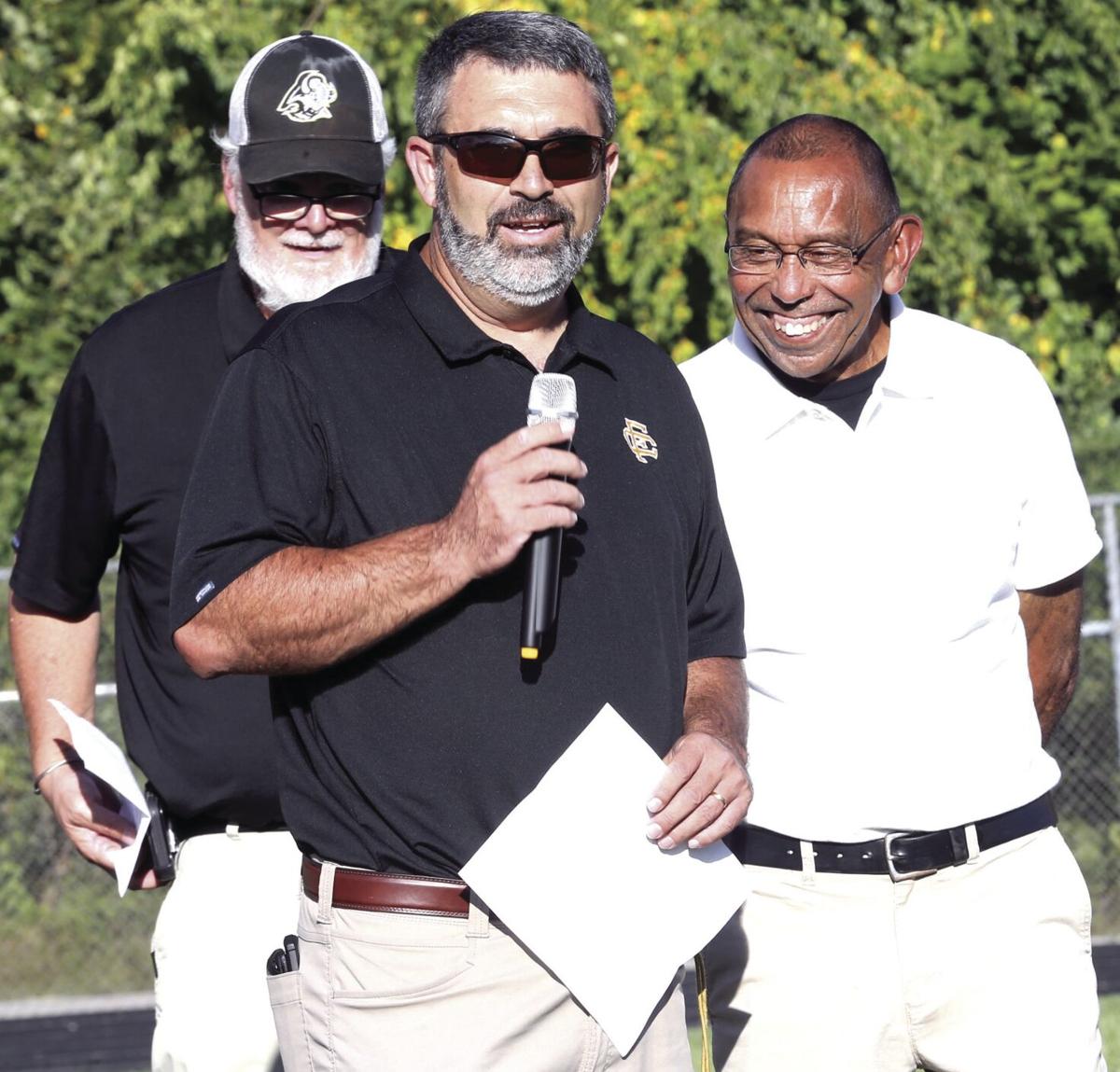 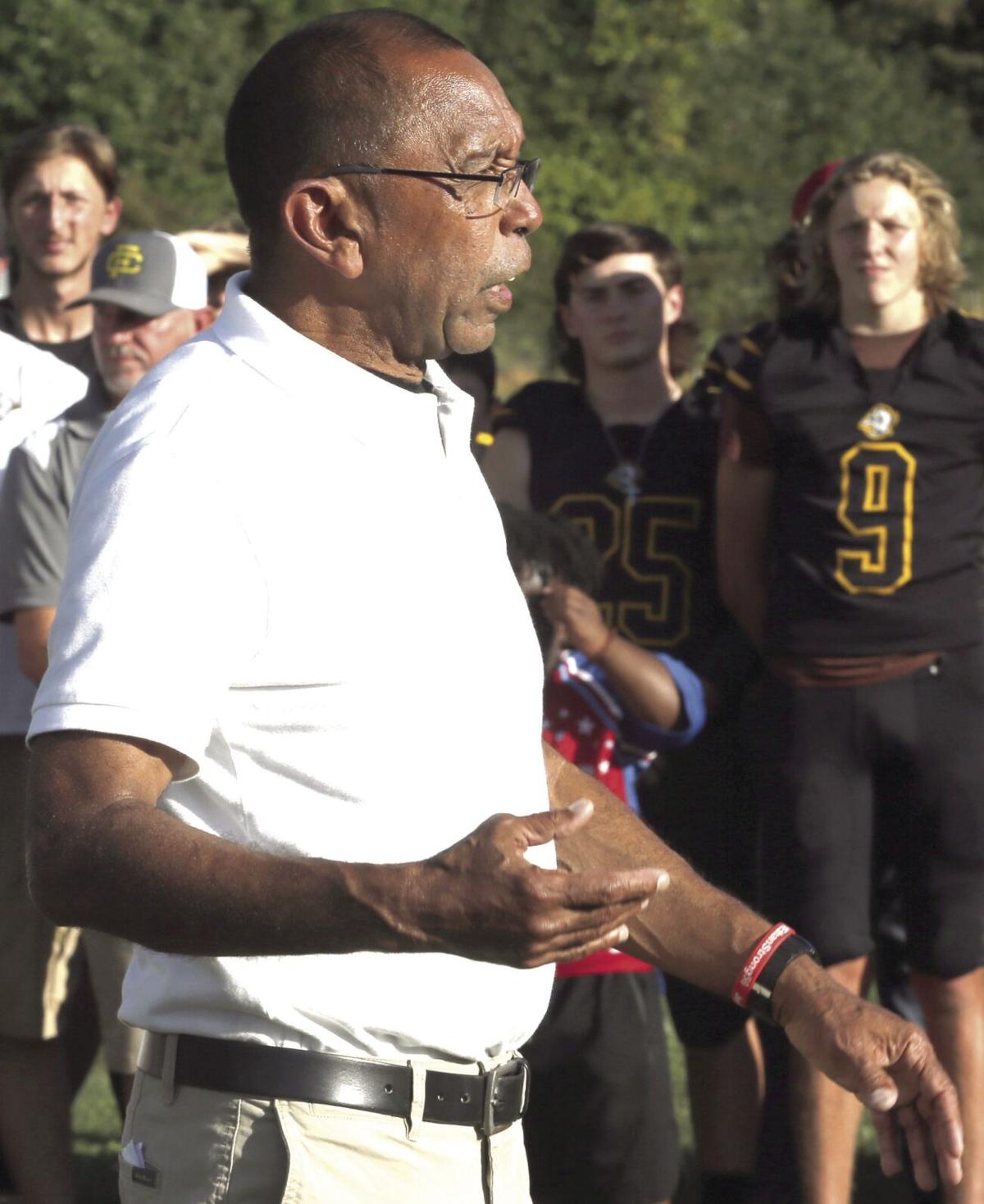 Coach Winfred Beale is in his 40th year of coaching at Floyd County High School. 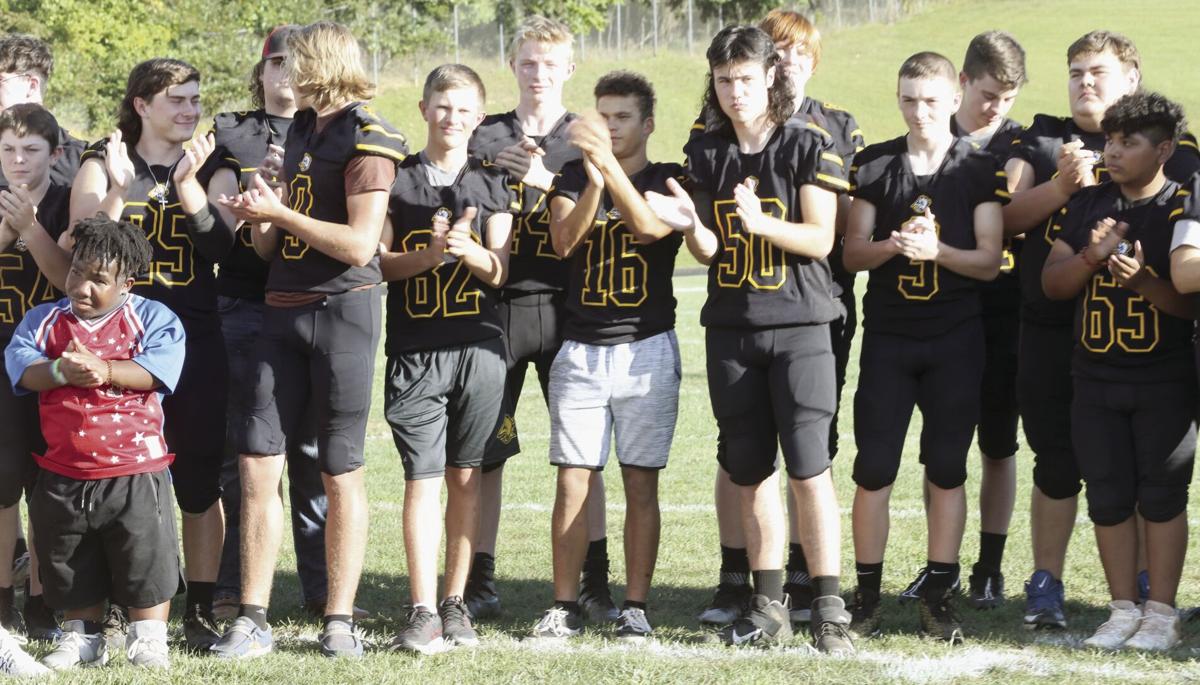 Current members of the football Buffaloes applaud their coach. 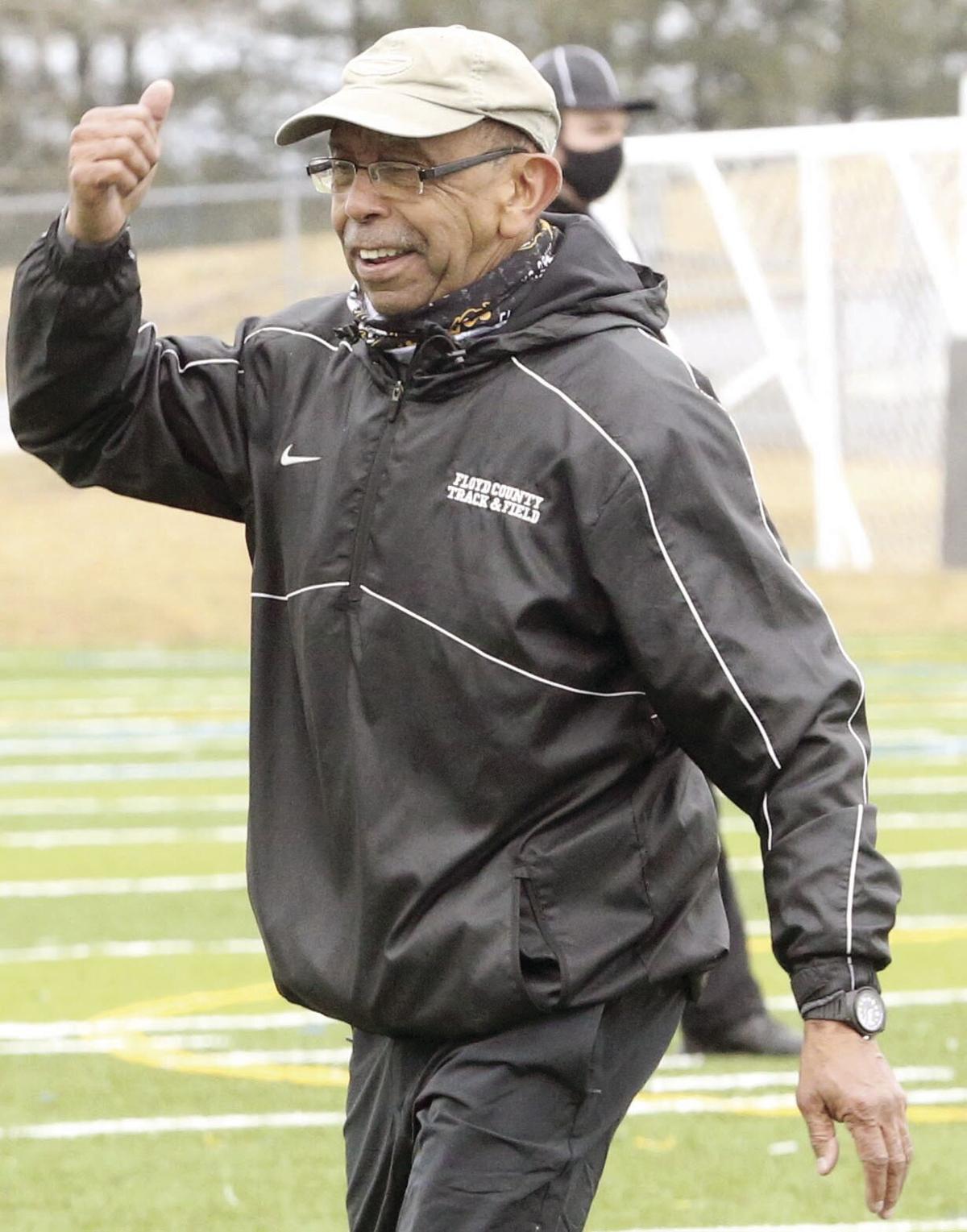 Coach Winfred Beale keeps an eye on the field action.

After a year-long delay because of the COVID-19 pandemic, the football field at Floyd County High School was formally dedicated with its new name Friday, Sept. 17: Coach Beale Field, for the school’s longstanding and legendary head coach Winfred Beale.

A crowd of current and past Buffalo players, cheerleaders, coaches from other schools, the Director of the Virginia High School League, family and fans gathered at the north end of the field and faced the setting son before the game Friday night.

FCHS head principal Barry Hollandsworth told a story about the coach talking him into running in a long race at a track meet while in high school. Hollandsworth said he was wheezing and soaked in sweat, and came in behind the regular runners and remembered that the coach pulled him aside and said, “Don’t worry, I’ll never ask you to do that again.”

School Superintendent John Wheeler praised Beale for his dedication to his student athletes, the school and the community. Billy Hahn, executive director of VHSL, called the coach a “legend in the Commonwealth and a model for coaches.”

Some told stories about playing for Coach Beale or against him or just knowing him as an outstanding man and leader. They all praised his commitment and a man who put the safety of his student athletes first and foremost.

Coach Beale closed out the speakers, thanked those who spoke and those who took the time to come visit. He told each that they were always considered part of his family.

“Please know that I love all of you,” he said. “Thank you sharing this day.” Even as game time approached, he posed with the many requests for photo and sharing of memories.

Then the Buffaloes honored him by beating Fort Chiswell for homecoming and their coach.

The name has been up on the scoreboard for some time after the pandemic kept delaying the dedication.

The middle school boys basketball squad finished a successful season with a 15-1 record last month, winning its first eight games that began i…

Long-time councilman Bruce Turner was appointed by fellow Town Council members Thursday evening to serve as the town’s Vice Mayor for 2022 and 2023.

Back to drawing board for Town Hall renovations

The Lady Buffs of the middle school girls basketball team had a rough start to the season, but closed it undefeated after its first three games.

Lucas Graham has led Floyd’s team of eight emergency dispatchers since October, a move he said is a testament to Sheriff Brian Craig’s efforts…

Stations of the Floyd County Volunteer Fire Department announced their top volunteer responders for 2021 recently, including Rocky Woolwine of…

Coach Winfred Beale thanks those who attended and/or spoke to the dedication of the football field.

Coach Winfred Beale is in his 40th year of coaching at Floyd County High School.

Current members of the football Buffaloes applaud their coach.

Coach Winfred Beale keeps an eye on the field action.