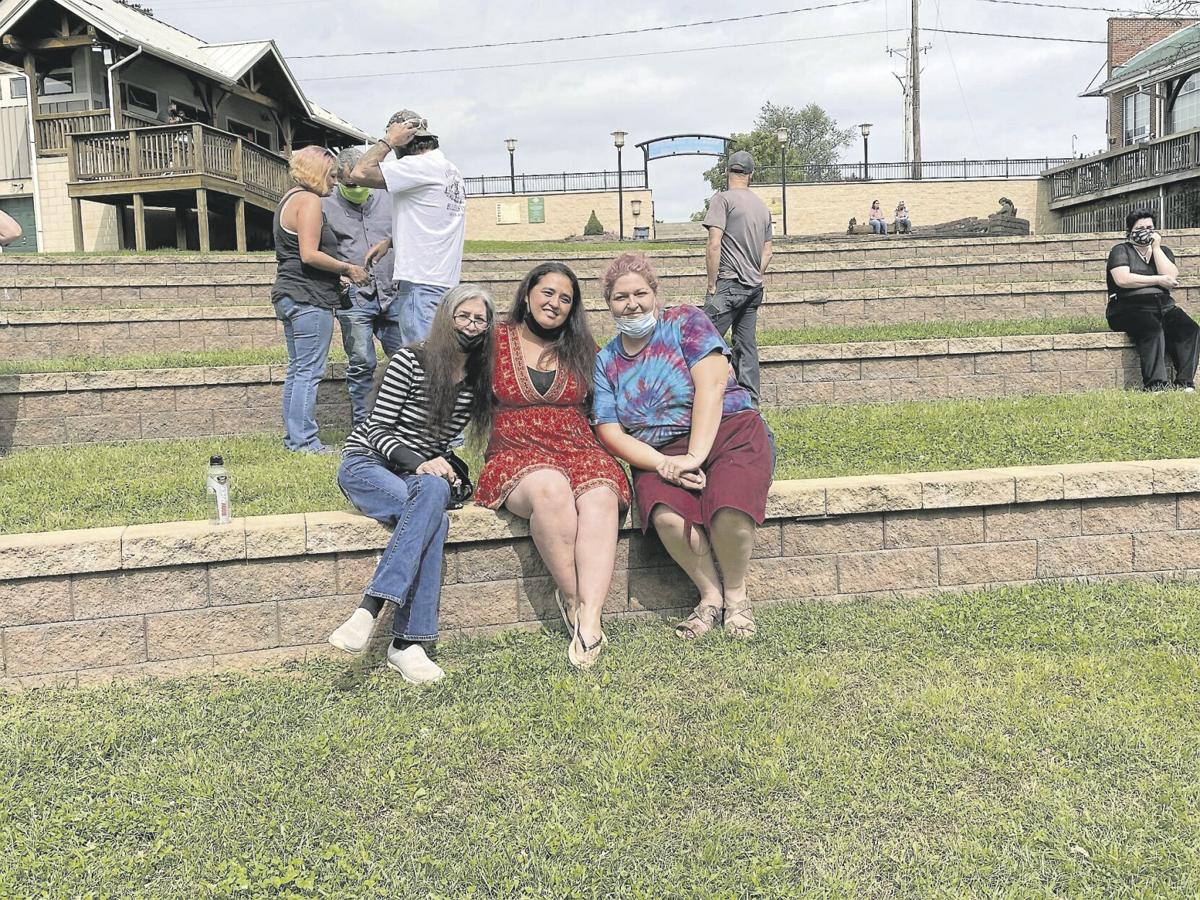 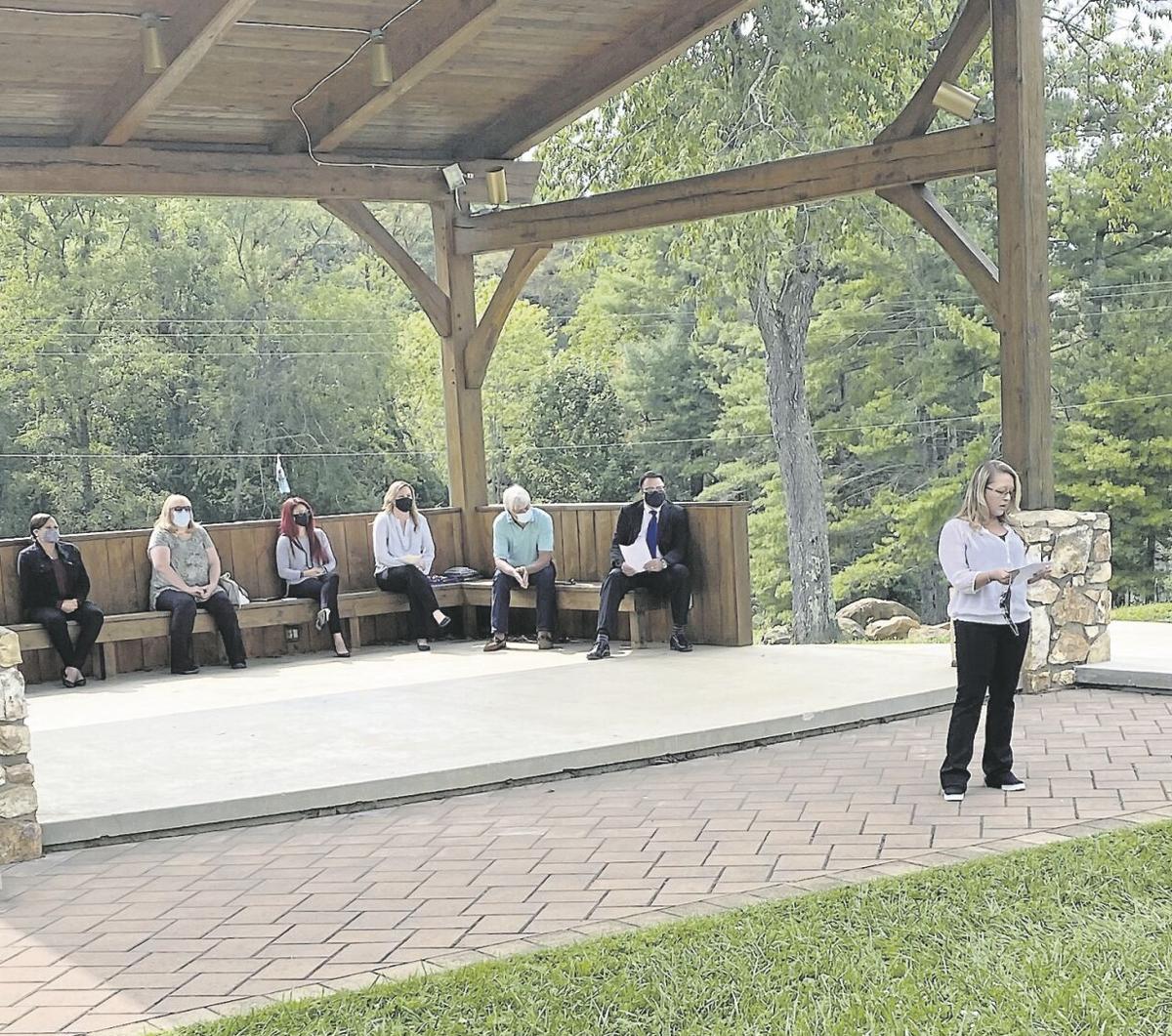 Danielle Evans spoke about her experience with Drug Court and recovery from addiction during Tuesday's ceremony. PHOTO BY ASHLEY SPINKS.

Danielle Evans and Paige Wesley have known each other since high school. Back then, they used to party together, Evans told a crowd assembled in Warren G. Lineberry Memorial Park on Tuesday afternoon. But now, they’re both sober, in recovery, and successful graduates of Floyd County’s Drug Court Program. “I guess you could say we’ve come full circle in life,” Evans said in a speech celebrating Wesley.

Evans is a past graduate of the Drug Court program, and was the featured speaker during Wesley’s graduation ceremony in the park earlier this week. Due to social distancing mandates established in response to the coronavirus pandemic, Tuesday’s ceremony was held outside—a first for the Drug Court program. Wesley is the fifth graduate of the county’s rehabilitation program, which was launched in March 2016 as an alternative to incarceration for those with substance use issues.

Laurie Trail, the Drug Court coordinator for Floyd, called the program “intensive—definitely not an easy alternative” to jail time. People with nonviolent “drug or drug-driven offenses,” Trail said, are sometimes offered a spot in the Drug Court program, which can take up to two years to complete. Of graduation ceremonies like the one held Tuesday, Trail said, “It’s a huge accomplishment when we get to this day.”

Throughout the course of the program, participants are asked to check in at minimum monthly with the court; to submit to regular and random drug testing; to enter a treatment program and to complete at least 100 hours of community service. New River Valley Community Services and other Drug Court partners also work to connect participants with resources they need, such as stable housing and transportation. Successful completion of the program can mean a clean record and a fresh start for participants.

Thanks to the support she received through Drug Court, Evans said, her charges were dropped, which allowed her to pursue her dreams. Since graduating from Drug Court, she has been accepted into a nursing program. Evans was sure to emphasize that while there is “life after Drug Court” and that people can lead happy and fulfilling lives in recovery, each day is a challenge when you’re living with addiction.

“I want to let you all know I’m here for support,” Evans told the audience, which included some former and current Drug Court participants. “We will fight addiction for the rest of our lives…We will need each other and the tools we’ve learned during sobriety,” she added.

After speaking about her own experiences with addiction and recovery, however, Evans brought everyone back to the central reason they had gathered that day: “We’re here today to celebrate and congratulate Paige,” she said.

Paige Wesley began the Drug Court program in July of 2018, she said. Asked how she felt on Tuesday, at the end of her journey, Wesley said, “I’m very excited. It feels like at the beginning it was never-ending…now I can’t believe it’s over.”

She added, “I just tried to do what they told me and keep an open mind, and I’m very proud of myself.” Wesley was joined at the ceremony by her mother, Susan Trendler, her friend Michelle Radford and many others. Also in attendance were representatives from New River Valley Community Services and the Floyd County Sheriff’s Office, Circuit Judge Mike Fleenor, and Floyd County Commonwealth’s Attorney Eric Branscom.

Wesley also had the opportunity to address the crowd of around 15 people before the ceremony ended. “I pushed through, and here I am today,” she said. “I’m so thankful to have had this opportunity.”

Following the ceremony, free boxed lunches were served to attendees, who enjoyed a socially-distant meal in the park.

Kendahl Pruitt wants people to spend time with their friends while putting on their country this coming Saturday afternoon. Doing so, she says, will help spread a message of kindness, raise money for a scholarship, and preserve the legacy of Gracie LeAnn Dimit.

Danielle Evans spoke about her experience with Drug Court and recovery from addiction during Tuesday's ceremony. PHOTO BY ASHLEY SPINKS.