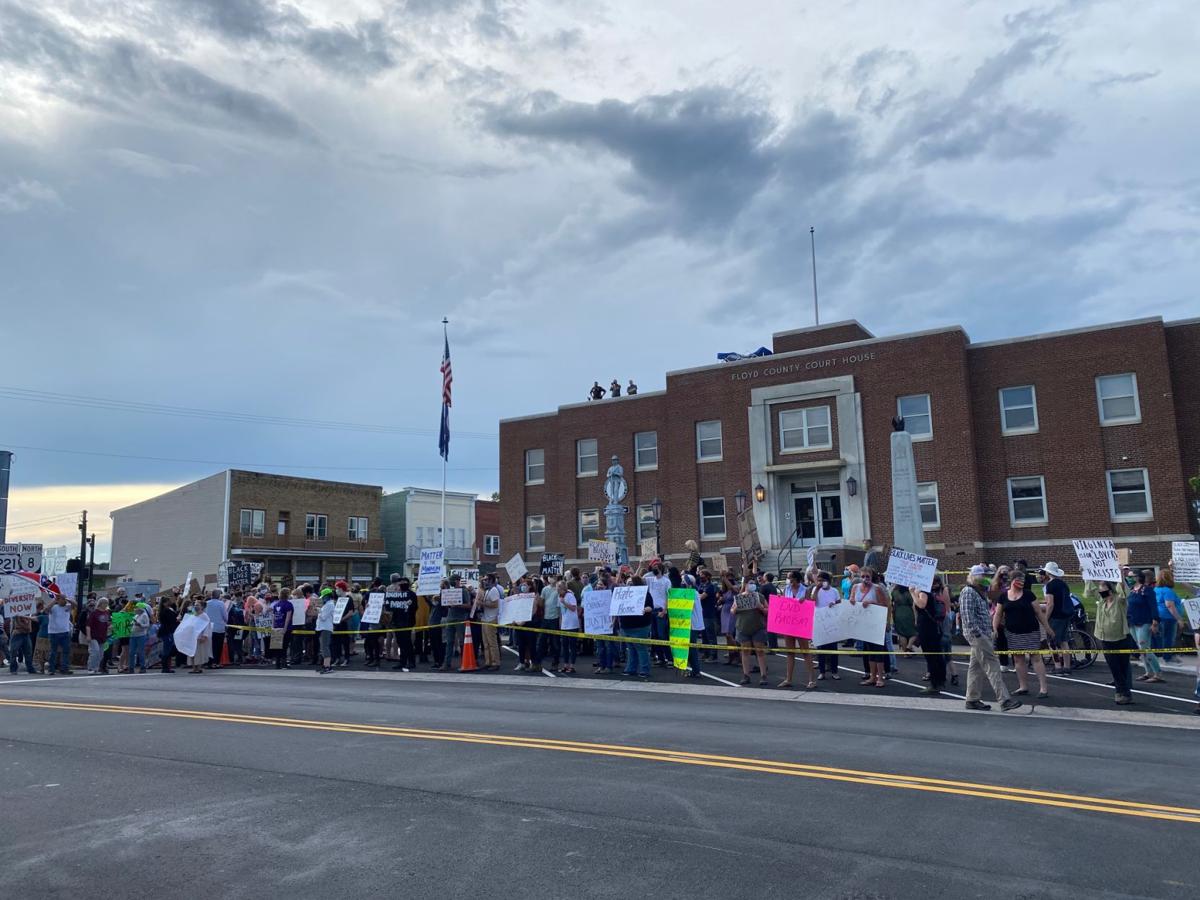 More than 200 people gathered at the Juneteenth #FloydforFloyd vigil on Friday evening. 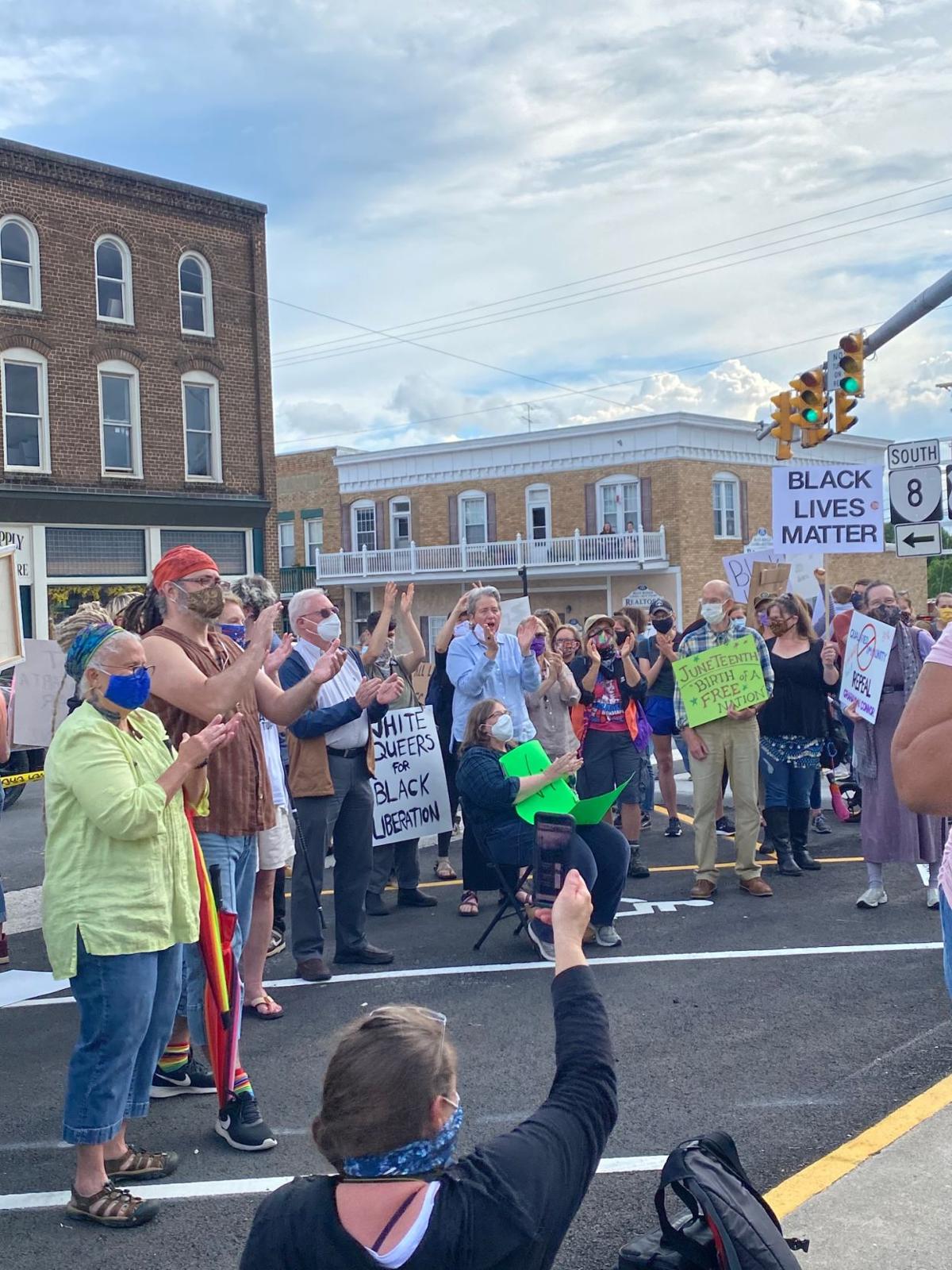 Vigil attendees cheer in response to a speaker. 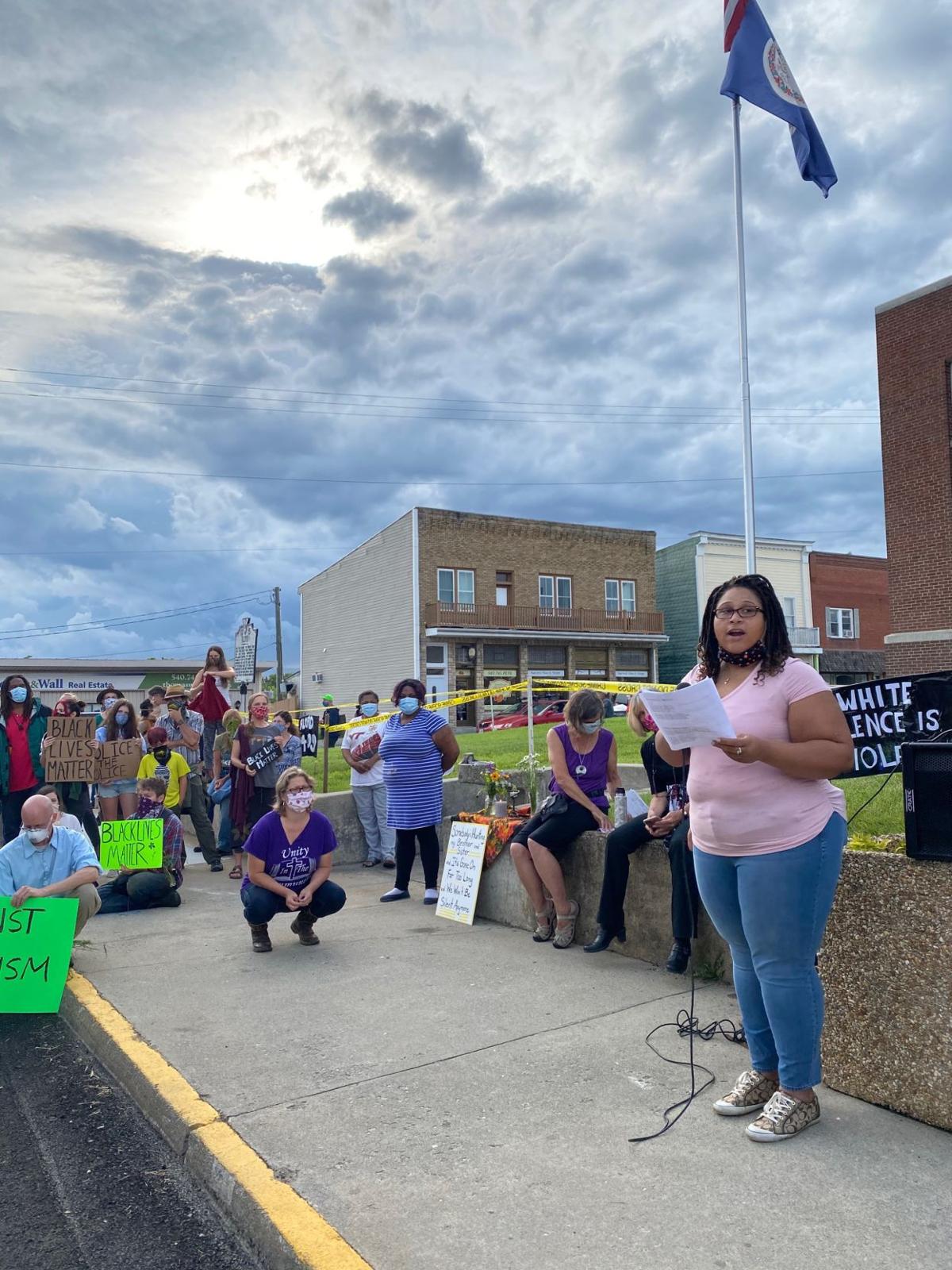 Sierra Little, who attended the vigil with her 12-year-old daughter, was one of the scheduled speakers. She recited Maya Angelou's poem "Still I Rise."

A Juneteenth vigil dubbed “#FloydForFloyd,” and organized by Floyd CORE (Conversations on Racial Equity), among others, was held in front of the Floyd County Court House Friday evening. The otherwise peaceful vigil quickly escalated after a counter-protestor, who had spent the entire event pacing the police tape line and waving a Confederate flag, began to threaten vigil attendees.

The event was attended by more than 200 people, including several legal observers from the National Lawyer Guild, and the crowd that gathered was diverse in age, race, gender and background. Vigil attendees, who were there, organizers said, “to grieve the lives lost to racialized violence and say their names,” began to gather long before the official 6 p.m. start time, and singing quickly broke out. Some attendees brought musical instruments and others simply clapped along to the first tune, “Everybody’s Got a Right to Live.”

There was a large contingent of students and faculty from the Springhouse Community School in the crowd Friday, who student Felix Byler said didn’t plan to attend together but were guided by a “shared ideology,” as well as some younger children, such as those of Magen Adderley and Rissy Berliner.

Berliner has lived in Floyd for eight years, she said, while Adderley just joined her here. Their parents wore rainbow face masks and the children held signs that read, “Don’t you watch Sesame Street? Racism is bad.” Rissy said she believes it’s important that her children see “democracy in action,” and said they’ve been to more than 100 protests as a family.

The vigil had several scheduled speakers, including Michele Morris, a Black woman business owner who runs Woolly Jumper Yarns in the Town of Floyd, Sierra Little, a 2006 graduate of Floyd County High School who said she attended with her 12-year-old daughter because she knew the history of Juneteenth isn’t taught in schools, and Rosa Lovo, a biracial woman who graduated as Floyd County’s valedictorian last year.

Lovo spoke to the crowd about her own experience growing up in Floyd with a Black mother. “It really hurts…to think members of my family can’t go where they need to go safely,” Lovo said. She said between the threat of COVID-19, facing poverty and experiencing racism, “It’s too great a burden…but we bear it with a smile.”

Lovo said she was inspired to attend the protest in order to “prove something to myself—that even though I ‘pass,’ I want to be able to show up and show out for my people.” “Passing” refers to being perceived socially as a white person and being able to access some of the associated privileges.

When Morris took the mic, she immediately shouted “I see allies!” in celebration of the crowd. Morris kicked off her remarks with lighthearted humor, sharing that she keeps a portrait of Sojourner Truth holding knitting needles in her shop, “so that I’m not the only person of color (in the store),” she said.

Morris’ remarks centered on Sojourner Truth, and facing hard truths such as “how inhumane and devastating slavery was,” she said. She wondered, “How can we make our town a better and safer place for all of us…as we continue to fight against systemic racism…that leads to undue death?”

The vigil saw several other rounds of everyone singing together, including the song “This Little Light of Mine,” and the crowd cheered and waved anytime people driving by the court house honked or shouted in support.

Vigil leaders, who were all white women, on multiple occasions offered to cede the mic to any people of color who wanted to speak, but also led the group in chants of “Say his name; George Floyd! Say her name; Breonna Taylor,” and “No justice, no peace. No racist police.” They also led the group in prayer, and in an eight minute and 42 second moment of silence to recognize the murder by slow suffocation of George Floyd by police.

The vigil did see hecklers and counter-protestors, who sometimes shouted out of trucks, as well as a small group of about a dozen that gathered across the street from the court house.

Melanie Johnson, a Floyd resident who attended Friday, tearfully explained that she was motivated to attend because of a “broken heart for my Black friends and family, and a fear for their safety.” She added, “I have learned a lot—about the calmness of the Black Lives Matter people, and the anger of people driving by or on the other side of the street. I didn’t expect that kind of hate.”

Town Councilman David Whitaker stood with that group wearing a Donald Trump-themed hat but declined to comment on the event. Town Vice-Mayor Mike Patton also attended, and offered these thoughts: “I’ve sat here and watched a lot of people come and go…I saw a father with his two children, and the little boy’s t-shirt gives me hope,” Patton said. The shirt read: “I’ve come here to change the world.”

Others attending the vigil, however, spoke of their evolving views of both the Confederate flag and the monument to Confederate soldiers that stands on the court house lawn, and which has been a sticking point for various groups of protestors in the past several weeks.

Ann-Margaret Short attended the vigil on Friday, and said her great aunt helped raise money for the monument, which was erected by the Daughters of the Confederacy. “She didn’t think about what it would cost. And we know better now,” Short said, noting that her family has been in Floyd for at least seven generations.

The vigil went smoothly for about 90 minutes before an altercation between a man with a Confederate flag and certain attendees of the vigil. The man had been pacing in front of the crowd for the duration, as well as shouting obscenities and threats at the vigil.

At one point, according to observers, when the vigil organizers were naming Black victims of police brutality, the counter-protestor was shouting “Robert E. Lee!” repeatedly over all the victims’ names. The man has been identified as Roger Altizer of Tazewell County, and the Floyd Press confirmed Saturday that he was charged with simple assault and released from the New River Valley Regional Jail on bond.

According to one person who observed the altercation, a Black woman who was attending the vigil calmly began to ask the man waving the Confederate flag questions about the symbolism of the flag and why it was important to him. However, then a white man at the vigil who preferred not to be named began to taunt the man with the flag and threaten to take it. Explaining his actions after the fact, the man said, “I had an issue with the way he was presenting the flag—snubbing people, giving them the finger—he should have been able to protest peacefully like the rest of us.”

The counter-protestor began to yell and threaten the larger group with violence. He planted his flag in a patch of dirt nearby, ripped off his shirt and raced at the crowd. Legal observers from the National Lawyer Guild—easily identifiable by their neon green hats and vests—quickly put their bodies between the man and the crowd, trying to de-escalate the situation.

While Floyd County Sheriff’s deputies could be seen monitoring the vigil and small counter-protest from the roof of the courthouse for the duration of the event, several other deputies appeared within seconds at the urging of vigil attendees and escorted the counter-protestor away. Floyd County Sheriff Brian Craig confirmed the protestor, Roger Altizer, was arrested Friday evening and declined to comment further.

This article has been updated from its original version to include additional details about the vigil and to correct the spelling of Rosa Lovo's and Roger Altizer's names. We apologize for the errors.

This article was subsequently updated at 12:50 p.m. on June 20 to reflect charges against Roger Altizer.

More than 200 people gathered at the Juneteenth #FloydforFloyd vigil on Friday evening.

Vigil attendees cheer in response to a speaker.

Sierra Little, who attended the vigil with her 12-year-old daughter, was one of the scheduled speakers. She recited Maya Angelou's poem "Still I Rise."