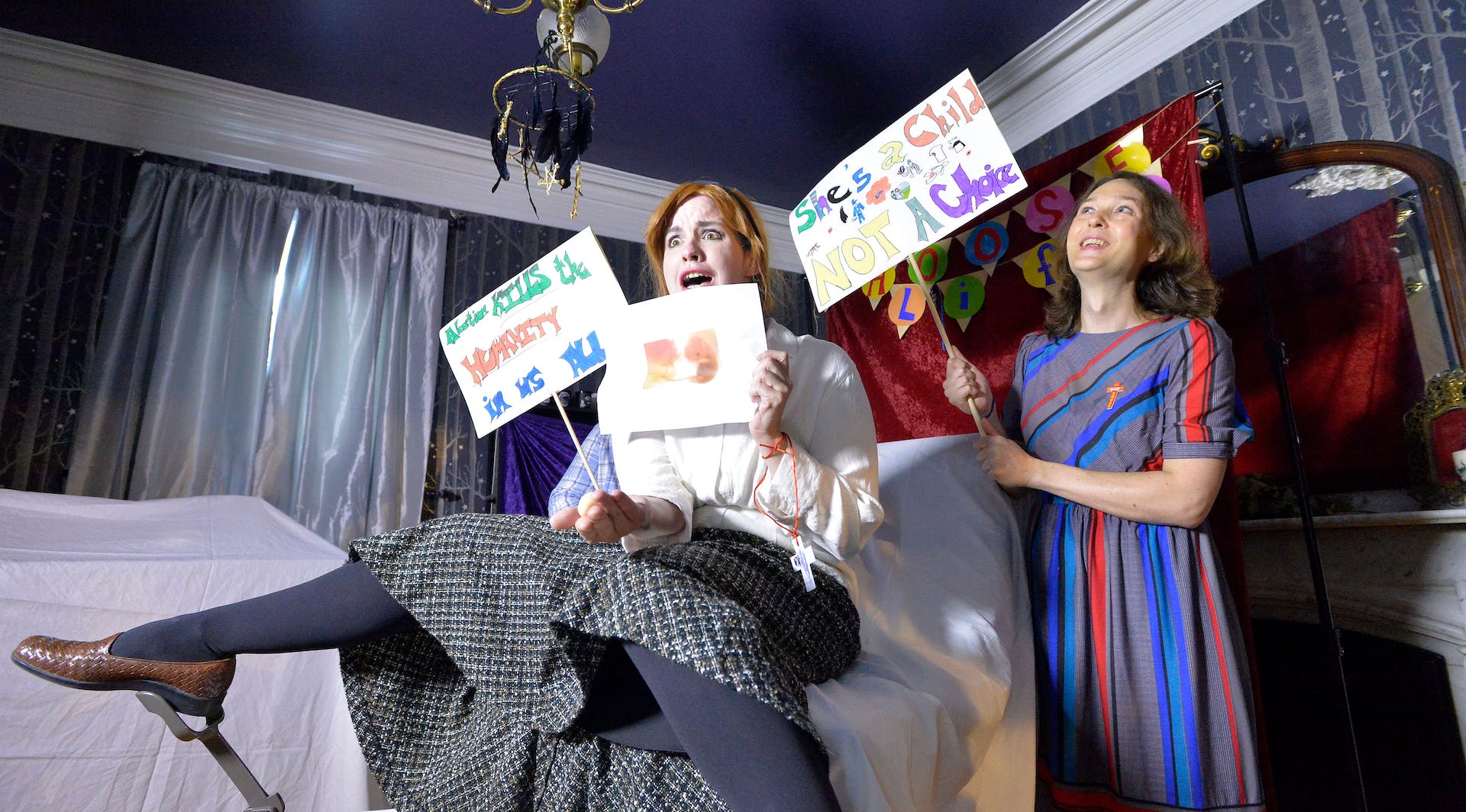 Texas’s controversial anti-abortion law known as the “Heartbeat Bill” went into effect at midnight on Sept. 1, 2021. Less than 24 hours later, the U.S. Supreme Court declared it would not block the law.

In response, The Satanic Temple, a nontheistic group that has been recognized by the IRS as a religion, announced that it would fight back by invoking the Religious Freedom Restoration Act, or RFRA, to demand exemption from abortion restrictions on religious grounds. RFRA laws, which came into effect in 1993, restrict the government’s ability to burden religious practices.

Like the Heartbeat Bill itself, The Satanic Temple’s efforts to circumvent abortion restrictions on religious grounds involve a creative and complicated legal strategy. As a scholar who studies the ways in which The Satanic Temple’s provocations affect public debates about religious freedom, I anticipate their latest legal argument will challenge some assumptions about RFRA and the freedoms it was designed to protect.

In the pivotal 1973 abortion case Roe v. Wade and Planned Parenthood v. Casey in 1992, the Supreme Court established that abortion is a Constitutional right. However, states can still pass laws that severely restrict access to abortion. The question is how severely.

Texas’s new law was designed to effectively shut down all abortion while protecting the state from judicial review.

First, the bill bans abortion after six weeks – the point at which Texas lawmakers claim a fetus’s heartbeat can be detected. Most women are not aware they are pregnant before six weeks, and Texas abortion providers estimate 85% of abortions in the state are performed after this period.

Second, the law allows anyone to sue those they can accuse of “aiding and abetting” an abortion for US$10,000. Critics of the law claim this is an intimidation tactic designed to threaten the clinics with so much potential liability that legal abortion becomes impossible.

But outsourcing enforcement to the public is also intended to protect the state. Proponents of the bill claim that since no state official is enforcing the law, abortion providers have no one to sue.

The 1990 Supreme Court case Employment Division v. Smith considered arguments that a member of the Native American Church had a religious right to use peyote, a controlled substance.

The court ruled that freedom of religion was no excuse from compliance with a generally applicable law – a law that applies equally to everyone and does not single out specific groups. With this decision, it appeared that the free exercise of religion guaranteed in the First Amendment meant very little.

In response, Congress wrote the Religious Freedom Restoration Act, which was signed into law in 1993.

Under RFRA, the government cannot burden the free exercise of religion unless: 1) it has a compelling reason for doing so, and 2) the government acts in the least restrictive way possible to achieve its purpose.

Four years later, in Boerne v. Flores, the Supreme Court ruled that RFRA applied only to the federal government and not to individual states. So many states, including Texas, passed similar legislation, sometimes called “mini-RFRAs.”

In 2014, the Supreme Court ruled in Burwell v. Hobby Lobby that under RFRA, the federal government could not require the Christian company Hobby Lobby to fund insurance that provided their employees with certain forms of birth control. This decision inspired The Satanic Temple by linking the question of religious liberty with that of reproductive rights.

The Satanic Temple and RFRA

The Satanic Temple began in 2013 and has launched a number of political actions and lawsuits related to the separation of church and state. Texas is home to four congregations of The Satanic Temple, more than any other state.

Although The Satanic Temple does not believe in or worship a literal Satan, they revere Satan as described in the works of English poet John Milton and the Romantic movement, an intellectual movement that originated in late 18th-century Europe, as a powerful symbol of rebellion against authority.

The Satanic Temple’s seven tenets include the belief that “one’s body is inviolable, subject to one’s own will alone.” It interprets state restrictions on abortion access as a burden on this sincerely held religious belief.

In 2015, The Satanic Temple began a series of lawsuits against the state of Missouri, where women seeking abortions must view sonograms and then review a booklet stating, “The life of each human being begins at conception. Abortion will terminate the life of a separate, unique, living human being.” After this, the women must spend 72 hours considering their decision before finally receiving an abortion.

The Satanic Temple argued that this practice was an unconstitutional effort by the state to impose its religious views onto vulnerable women. Furthermore, it claimed that under Missouri’s RFRA law, Satanic women could not be forced to comply with these procedures. Instead of answering whether RFRA protected members of The Satanic Temple from abortion restrictions, the court dismissed these cases on procedural grounds.

The Missouri Supreme Court ruled that since the plaintiff, a woman known as “Mary Doe,” was no longer pregnant by the time her case wound its way through the courts, she no longer needed an abortion and therefore had no legal standing to sue. The Satanic Temple appealed this ruling to the U.S. Supreme Court, which declined to hear it.

To prevent similar rulings, ministers for The Satanic Temple created an “abortion ritual,” in which a woman affirms her own autonomy, obtains an abortion, and then concludes the ritual.

Since abortion is part of the ritual, The Satanic Temple argues, subjecting a woman to a waiting period is akin to the government interfering with a baptism or communion. In February 2021, The Satanic Temple filed a new lawsuit against Texas, arguing that the state was violating the religious liberty of its new plaintiff, referred to as “Ann Doe.”

The devil is in the details

The Satanic Temple raises important questions about what counts as a religion. Opponents of the group argue that abortion is a medical procedure, not a protected religious practice. But The Satanic Temple’s lawyer, Matthew Kezhaya, points to a 2009 case, Barr v. City of Sinton, in which Texas pastor Richard Barr was told the halfway house he operated violated a zoning ordinance.

The Texas Supreme Court ruled that excluding Barr’s halfway house from the city violated Texas’s RFRA law. Key to this argument was the court’s statement that, “The fact that a halfway house can be secular does not mean that it cannot be religious.” Likewise, Kezhaya argues, abortion can be both secular and religious, depending on context.

Kezhaya also disagrees that outsourcing the enforcement of abortion to private lawsuits makes the state of Texas immune to judicial review. He compared this situation to “racially restrictive covenants” of the Jim Crow era in which white residents signed legal agreements never to sell or rent their homes to African Americans.

The Supreme Court initially declined to hear cases challenging these covenants because they were considered private contracts. But in 1948, it ruled that a court enforcing these contracts was a state action that violated the 14th Amendment.

The Satanic Temple also has an even more creative strategy. The Food and Drug Administration, which controls the distribution of the abortion pills mifepristone and misoprostol, is subject to the federal RFRA law. The Satanic Temple sent a letter to the FDA explaining that its prescription requirements illegally burden their abortion ritual. Currently, these drugs are only available with a doctor’s prescription, and the doctor must adhere to any state restrictions before providing them.

In an interview with me in September 2021, Kezhaya, The Satanic Temple’s lawyer, admitted this was experimental territory. Assuming a court approved this accommodation, it could legally make The Satanic Temple a pharmacy, in addition to a religious entity, because it would be distributing controlled medications.

Is RFRA a “loophole?”

The Satanic Temple’s opponents claim it is abusing RFRA and using it as a “loophole” to circumvent the law. However, Lucien Greaves, a co-founder of The Satanic Temple, counters that RFRA was always intended to protect religious minorities from the government. If anyone is abusing it, he claims, it is companies like Hobby Lobby that invoked it to restrict the choices of their employees.

Critics of RFRA, such as legal scholar Marci Hamilton, warn that religious exemptions can turn the law into “Swiss cheese.” In other words, there could be so many religious loopholes that laws become meaningless. Whether or not this is a serious concern, it is certainly true that RFRA must not benefit only the Christian majority.

This is why constitutional law professor Jay Wexler has encouraged the work of groups like The Satanic Temple, stating, “Only by insisting on exercising these rights can Muslims, Hindus, Buddhists, atheists and everybody else ensure that the Court’s new religious jurisprudence does not result in a public space occupied exclusively by Christian messages and symbols. At stake is nothing less than our national public life.”

Get the best of The Conversation, every weekend. Sign up for our weekly newsletter.

Joseph P. Laycock does not work for, consult, own shares in or receive funding from any company or organization that would benefit from this article, and has disclosed no relevant affiliations beyond their academic appointment.

What to know about the new Texas abortion law

What does the Texas law do?

How many people could be affected by the Texas law?

How is the Texas law different from those in other states that have tried to restrict abortion early in pregnancy?

How did the Texas abortion law come about?

What implications are there for abortion laws in other states?

Could states take a similar "citizens" enforcement approach to laws on other hot-button issues?

Tips for getting back in the dating game post-divorce

How exercise snacking can help keep you in shape

How exercise snacking can help keep you in shape