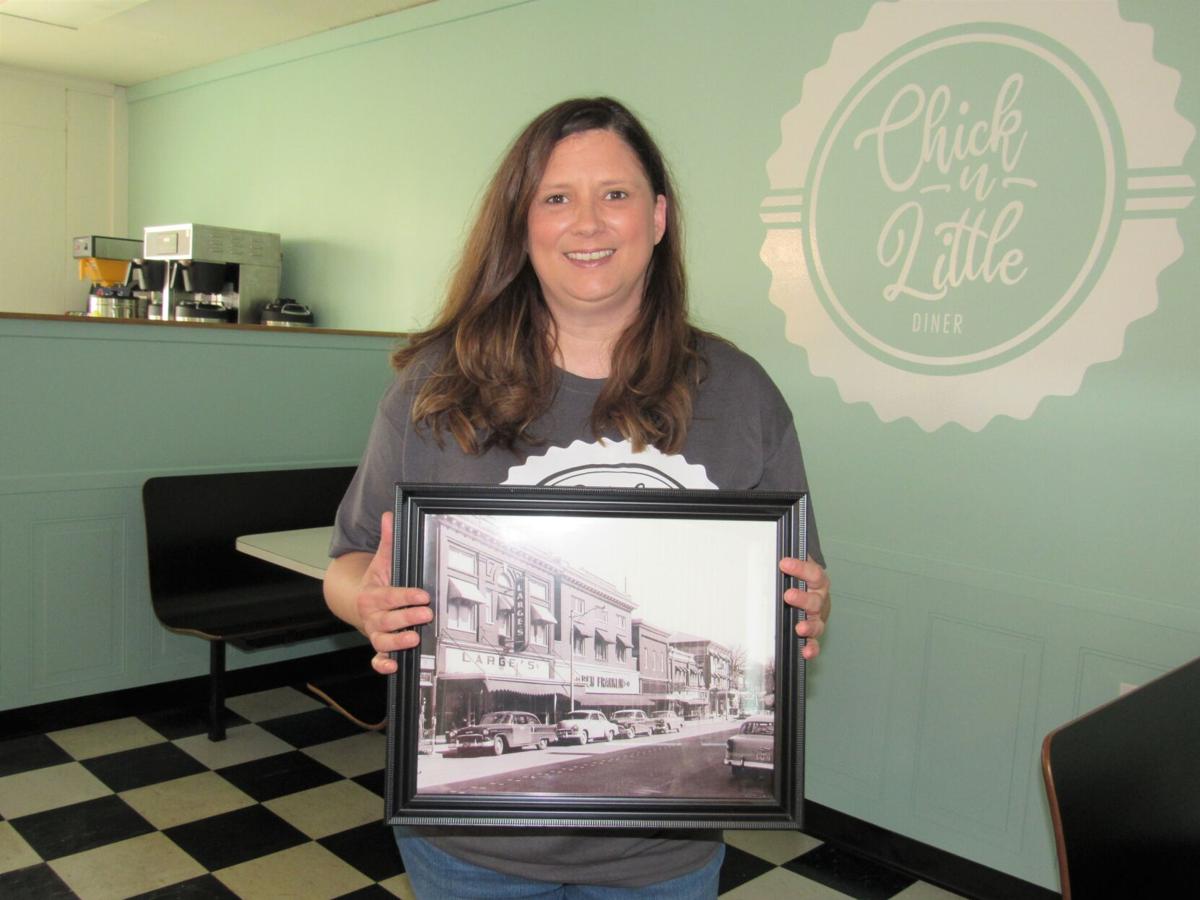 Carrie Baxter holds up an old photo of Abingdon's Main Street, which has housed the Chick-n-Little Diner for decades. 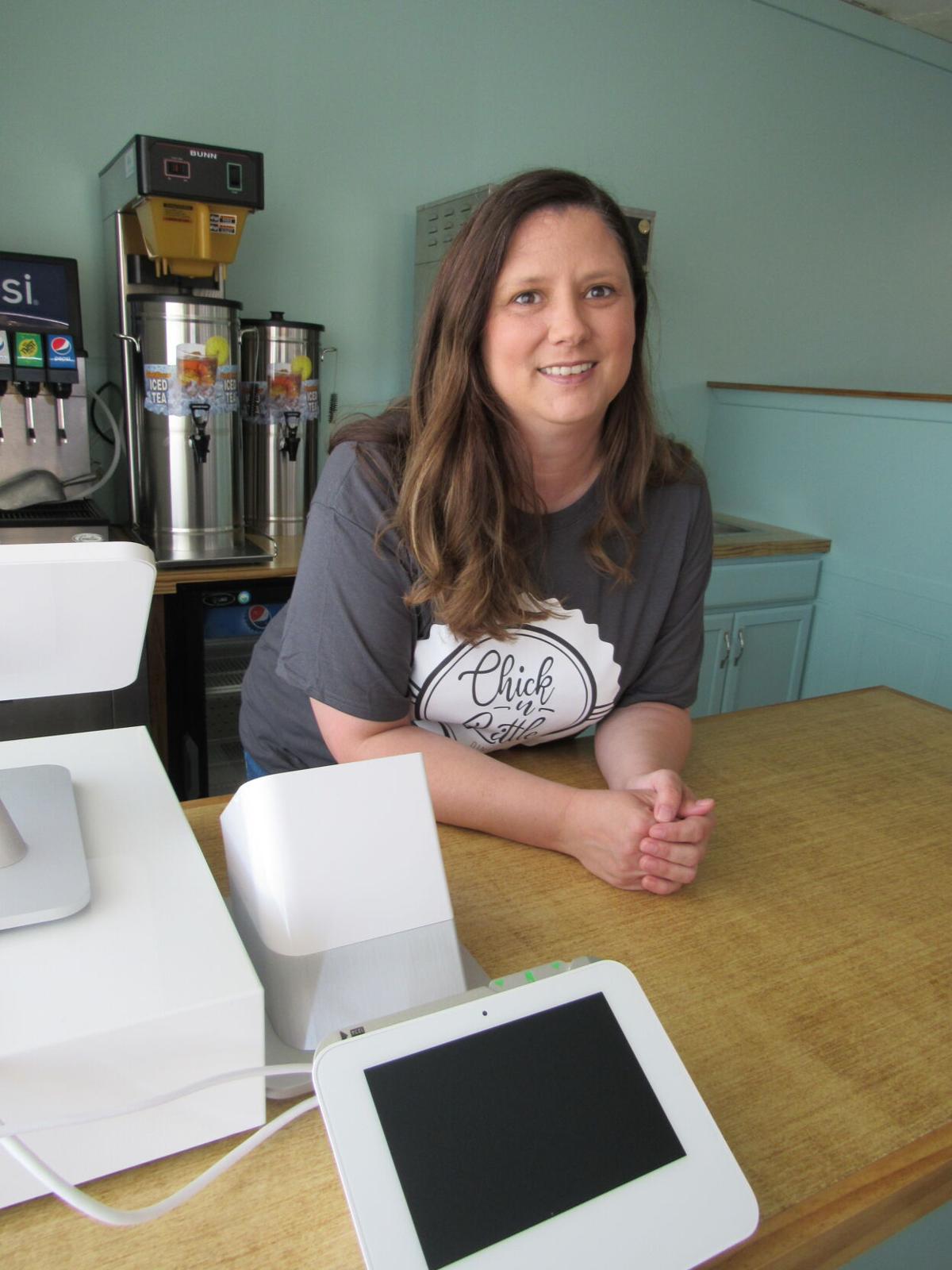 Chick-n-Little's old cash register has been phased out and replaced with a computerized system that can send receipts to customers via email. 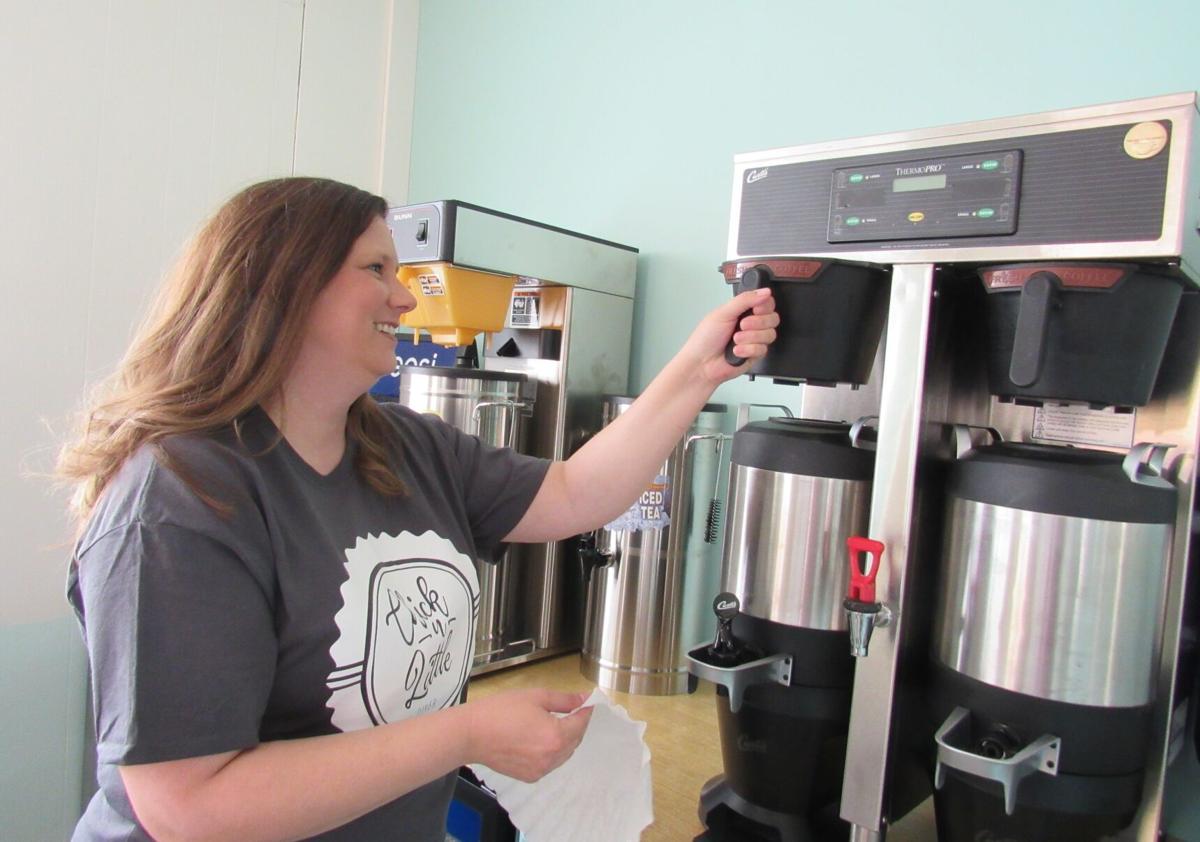 Temporarily shutting down Chick-n-Little has allowed owners Carrie Baxter (pictured) and Todd Baxter to retool the diner's menu while making sure to keep nostalgic staples. 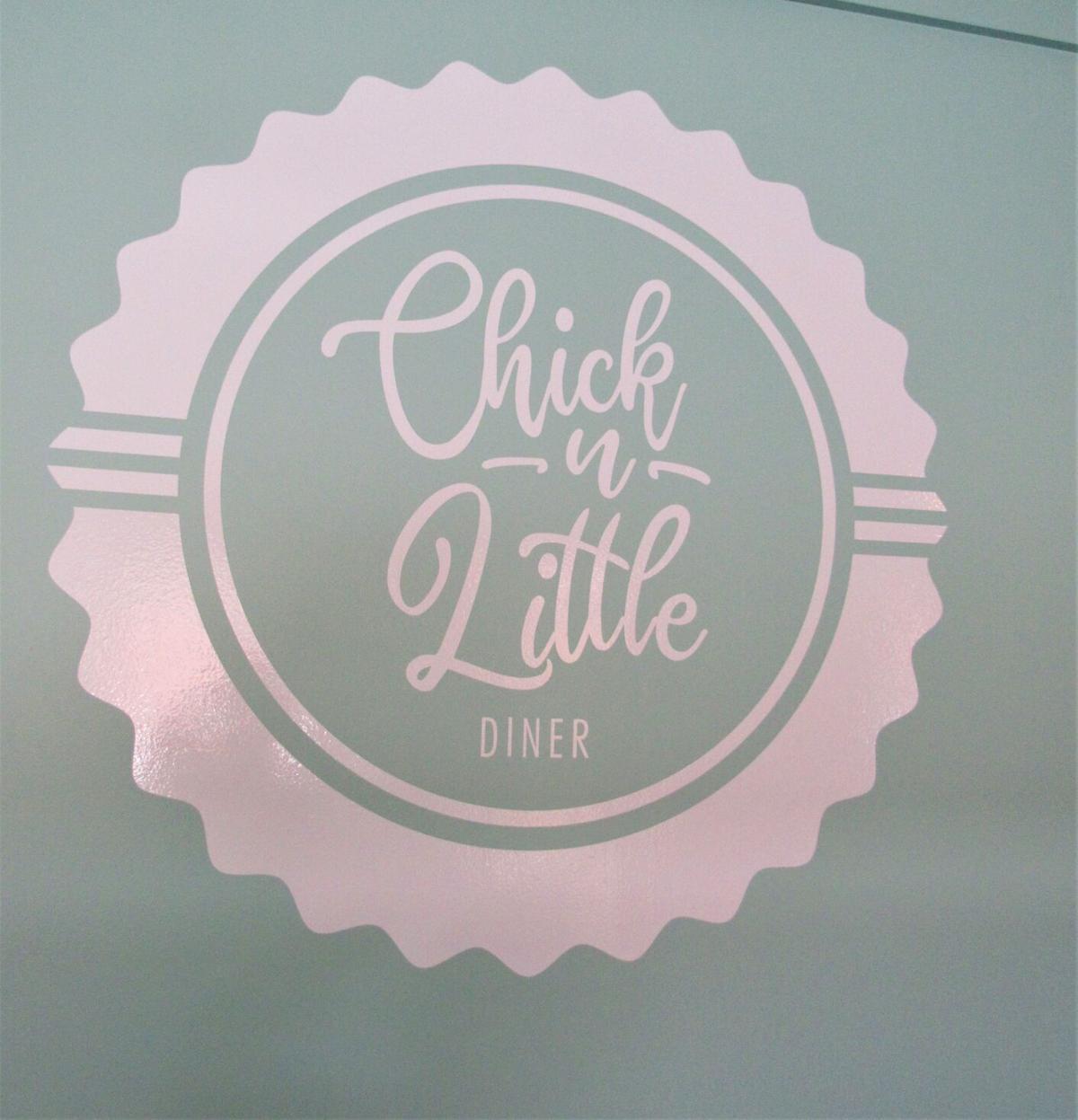 Chick-n-Little Diner has received a fresh coat of light green paint during a remodel.

ABINGDON, Va. — After a monthslong coronavirus shutdown, a small Abingdon restaurant is making big plans to keep the lights on.

While hundreds of restaurants throughout the country are expected to shutter this year, Chick-n-Little Diner is preparing to reopen — as soon as next month.

Restaurant owners Carrie and Todd Baxter rolled up their sleeves earlier this spring to come up with a plan to ramp up dining room service during the pandemic while keeping the option for takeout orders.

Since a temporary closing in March, they have spent their free time remodeling the nostalgic building, giving the interior a face-lift as well as making it safer for employees and customers once they return.

“We knew we had to make some changes,” said Carrie. “Some changes are to meet new restaurant guidelines, and other fixes will help bring the business up to speed in technology.

“It was time to reimagine the restaurant.”

As odd as it may sound, the couple said there is a silver lining to being closed during the pandemic.

“One of the positive outcomes of the coronavirus is it’s given us time to make Chick-n-Little our own diner and to step out of the shadow of the former owners. While the food and the general principles will remain the same, we’re now offering our own take on things — our own recipes and our own solid service. We would never have had the time do this otherwise,” Carrie said.

“Once we knew our eight employees would be taken care of with unemployment benefits, we decided it was best to temporarily close.

“Our last day for business was March 17,” she said. “It was that week that everything came crashing down with COVID-19 concerns. That night, my husband and I discussed how many to-go items we’d have to sell just to be able to stay afloat. We decided it would be better to shut down for the time being. We had no idea it would be months instead of weeks.

“I think we naively believed this virus would only last for a few weeks and things would go back to normal.

“It was a hard decision to make. But we knew if we complied with social distancing regulations before we remodeled, we would be able to have only three or four tables in our little restaurant.”

The landmark business on West Main Street has drawn generations of customers over the years who crave the nostalgic, comfort foods it offers.

Carrie said the menu will still offer the same home-style foods plus a few new selections.

When the doors open in a few weeks, they will serve around 20 items, focusing on their most popular items, such as breakfast biscuits and gravy, chicken and waffles, omelets, sweet potato pancakes, hamburgers and fries and chicken tender baskets.

“We have to control our inventory right now, making sure we spend money in a responsible way and making the most of what we’re selling.

“We will have a few new menu items. I’m not sure if I should say what — maybe I will let it be a surprise,” said Carrie with a grin.

“Actually, we’re upping our biscuits. We’ve always been known for our sausage and tenderloin biscuits, but the biscuits are getting bigger and better. We’re going for some new biscuit combinations.”

Catherine Widener is the restaurant’s morning gravy maker, arriving as early as 5:30 a.m. to get the biscuits and homemade gravy started. She learned how to make gravy from her grandmother, she said. At 66, Widener has worked at the restaurant for nearly 40 years, at first for Ida Lupo, who owned the restaurant in the 1980s, and later for Lupo’s daughter, Debbie Lambert, who sold the restaurant to the Baxters in 2013.

All these years, she’s insisted on making gravy from scratch. “I will never make gravy from an envelope. It doesn’t taste the same,” said the cook.

Part of the couple’s new plan is to extend the restaurant’s operating hours.

To create more space in the approximate 1,500-square-foot building, the couple made some changes, some of which tugged at their heartstrings.

“We had to remove the 6-foot old-fashioned bar to open up more space for tables. That was really hard, and I actually cried. It’s a sentimental thing for a lot of our customers. It’s like an old-school lunch counter.

“We saved the bar in storage just in case we can bring it back one day.”

The old cash register located at the front entrance to the restaurant was replaced with a computerized system and moved to a corner for customer ordering and paying.

“We knew we couldn’t have customers standing 6 feet apart at the front where people are walking into the restaurant,” she said.

“Even before the pandemic started, we were looking to replace the cash register. We’ve really enjoyed our low-technology status all these years, but in order to be competitive and stay alive in this business, we needed an upgrade.

“We couldn’t find ink for the cash register to print receipts, so we had to handwrite the receipts for customers.

“Now, I can text or email a receipt to you. We have a lot of business clients who need receipts for reimbursements.”

The checkered floor will remain, but the walls were painted a light Colonial-style green. “To me, the green color pays homage to the rich agricultural history of Abingdon.

“Old booths will get reinstalled, but we plan to replace them soon after we shop around.”

The restaurant’s former entrance door will serve as an exit now. A second door that was not in use will be converted to a new entranceway.

“It will help with the traffic flow into the building and create a safer environment,” said the owner.

“People are anxious for us to open. We serve families with children and folks who are even in their 90s. We’ve missed our customers, and we’re ready to come back.”

“When we open, I’m sure the word will get out,” Carrie said with laughter.

“That’s the good thing about being in a business that’s been around for so long. People know we are here. Word of mouth is my best form of advertising.”

Accused of gunning down his stepson on Saturday, a Barren Springs man is being held without bond on two felonies.

Smyth's return to the classroom delayed until Oct. 26

After hearing from parents and teachers on the plan to return to in-person learning next month, Smyth County School Board voted Monday night t…

A community effort to help provide childcare for children of essential workers has finally come to fruition.

At its most recent meeting, the Washington County Board of Supervisors changed the county’s ordinance so that loud animal sounds will no longer count as noise violations.

Carrie Baxter holds up an old photo of Abingdon's Main Street, which has housed the Chick-n-Little Diner for decades.

Chick-n-Little's old cash register has been phased out and replaced with a computerized system that can send receipts to customers via email.

Temporarily shutting down Chick-n-Little has allowed owners Carrie Baxter (pictured) and Todd Baxter to retool the diner's menu while making sure to keep nostalgic staples.

Chick-n-Little Diner has received a fresh coat of light green paint during a remodel.