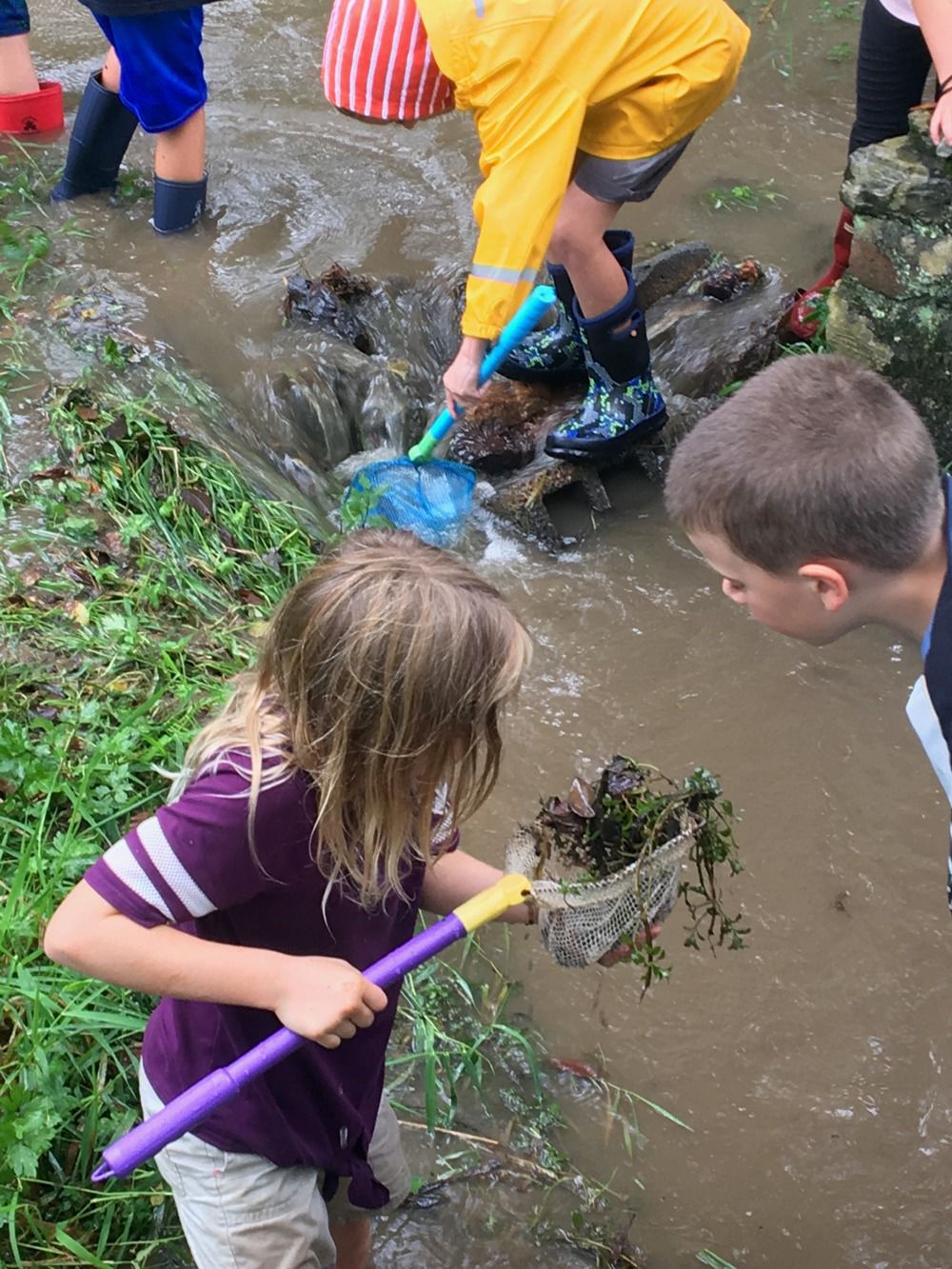 Students at Wolf Hills Community School in Abingdon participate in stream monitoring with the assistance of Cathy Landy, Southwest Virginia Save Our Streams coordinator. The students learn that the types of bugs found are good indicators of the health of the stream. 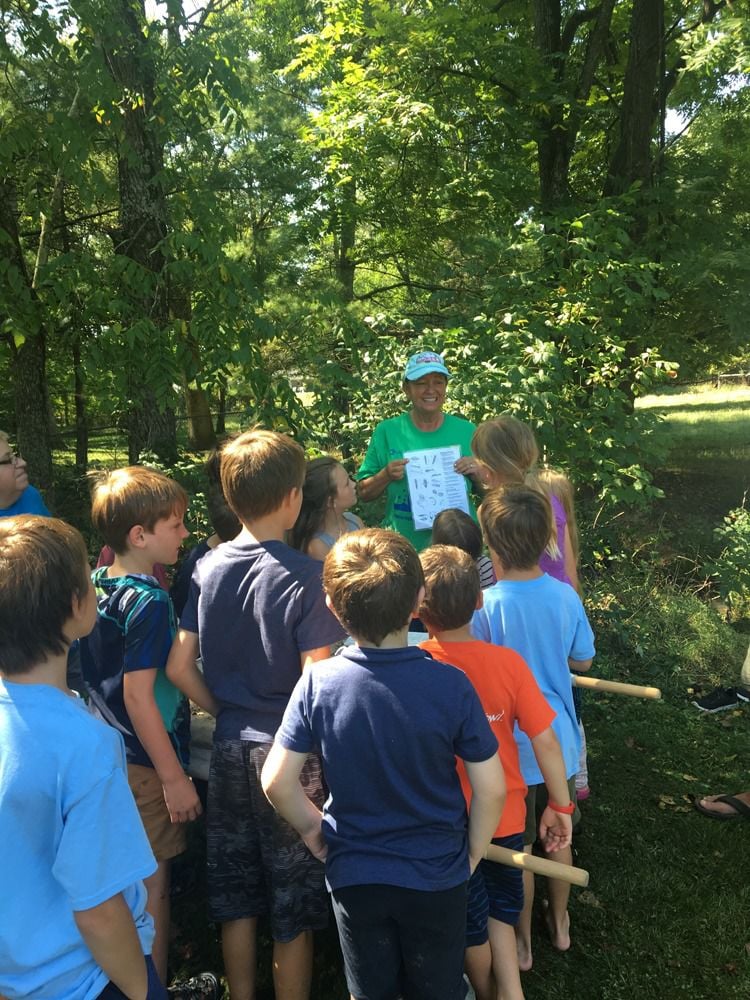 Cathy Landy, Southwest Virginia Save Our Streams coordinator, gives students at Wolf Hills Community School a lesson on the kinds of tiny insects commonly found in our streams.

ABINGDON, Va. — A creative campaign is drawing attention to a precious resource in the area and the work of a local nonprofit organization to keep that resource healthy.

Carol Doss, executive director of the Upper Tennessee River Roundtable, has launched a “This Is My River” campaign to raise awareness of rivers in the areas and the importance of water quality.

The campaign marks the 20th anniversary of the nonprofit organization in Abingdon, with an overall interest in improving water quality in the Clinch, Holston and Powell rivers, where a rich diversity of fish, mussel and other aquatic life are present.

‘This Is My River’

Doss launched the new campaign in conjunction with the organization’s annual giving drive.

“Even though we don’t own rivers, we often can feel a sense of ownership when we spend time at a river or grow up near a river,” she said.

Doss is encouraging people to produce a video — a phone video is fine — talking about why they feel a connection to a particular river and why they want to support the mission of the Upper Tennessee River Roundtable.

“They should end the video by sharing their names, pointing to the river, and saying, ‘This is my river.’”

The videos can be as short as one minute.

The next step for participants is to post their videos using the hashtag #ThisIsMyRiverUTRR, which will allow the organization to track the results.

“That will help spread the word about the Upper Tennessee River Roundtable and the importance of taking care of our rivers,” Doss said.

Another way participants can help preserve local rivers is through the Adopt-a-Stream program.

Participants — either individuals or groups — are encouraged to choose a river location to adopt. In addition to picking up litter around the site, participants can get involved in a stream monitoring program that teaches them how to catch tiny bugs.

“These tiny bugs that live in the bottom of creeks and rivers are known as macronvertebrates, said Doss. “The types of bugs found are good indicators of the health of the stream.”

Participants learn to turn over rocks to dislodge the macroinvertebrates into a net. The aquatic creatures are displayed on a table and inspected. Water-filled ice cube trays collect the retrieved bugs for a bug count.

Participants have the option to complete a short training program in order to become certified stream monitors, but certification is not required to participate in the program.

Cathy Landy, coordinator of Southwest Virginia Save Our Streams who works with the roundtable, is available to accompany noncertified participants for stream monitoring.

Wolf Hills Community School in Abingdon is part of the Adopt-a-Stream program, allowing their students to become better acquainted with Wolf Creek, which runs through the property.

“The children play in the creek throughout the seasons and are familiar with how weather and natural forces change it,” said Lori Briscoe-Pennington, director of the school.

“They clean litter out of the creek regularly. Students monitor the water quality of the creek with the help of the Upper Tennessee River Roundtable by assessing the diversity and number of macroinvertebrates in the water. This program aligns with our place-based educational philosophy and student-led stewardship beautifully,” said the director.

Doss said one of the best outcomes from the campaign will be introducing more people to the vital work of the organization that was formed in 1999 to achieve clean water throughout the watershed.

According to Doss, local leaders Neal Kilgore of Abingdon, Gary Boring of Wytheville and Blaine Delaney of Richmond, formerly of this region, were instrumental in developing the Upper Tennessee River Roundtable. A diverse board consists of representation from governments, industry, environmental groups, education, real estate, coal and smaller watersheds.

“The Upper Tennessee River Roundtable was the first watershed organization in Virginia, and it served as a model for others,” said Doss.

“Many times, people connect our name to Tennessee, but actually the Upper Tennessee River Roundtable works in Virginia on rivers that flow to the Tennessee,” she said.

The Upper Tennessee River Roundtable is based in Southwest Virginia and represents two cities and seven counties, including Washington County.

Projects completed by the Upper Tennessee River Roundtable throughout the past decades are having positive impacts on the community.

To learn more about “This Is My River” and Adopt-a-Stream programs, contact Doss at the Upper Tennessee River Roundtable at 276-628-1600.

Watch Now: Biden wants to raise taxes on the wealthy

Watch Now: Biden wants to raise taxes on the wealthy

Watch Now: How much will space travel cost?

Watch Now: How much will space travel cost?

The word “maroon” has many meanings – a burgundy color or to be left alone in an isolated location like an island.

The defense called it a crime of passion.

Friends and family of the Fort Chiswell Animal Park are mourning the death of one of the zoo’s most popular animals. Cheeto the Giraffe died W…

A former cop and solider who ambushed and shot three deputies last summer will spend more than two decades in prison for his crimes.

A Wythe County man is being held without bond on five counts of possessing child pornography.

Virginia State Police have identified Yacek Castillo of New York as the motorcyclist who died in a single-vehicle crash last Monday on Interstate 81 in Wytheville.

Accused of setting fire to a Wytheville convenience store early Tuesday morning after his credit card was declined, a Michigan man is being he…

Students at Wolf Hills Community School in Abingdon participate in stream monitoring with the assistance of Cathy Landy, Southwest Virginia Save Our Streams coordinator. The students learn that the types of bugs found are good indicators of the health of the stream.

Cathy Landy, Southwest Virginia Save Our Streams coordinator, gives students at Wolf Hills Community School a lesson on the kinds of tiny insects commonly found in our streams.