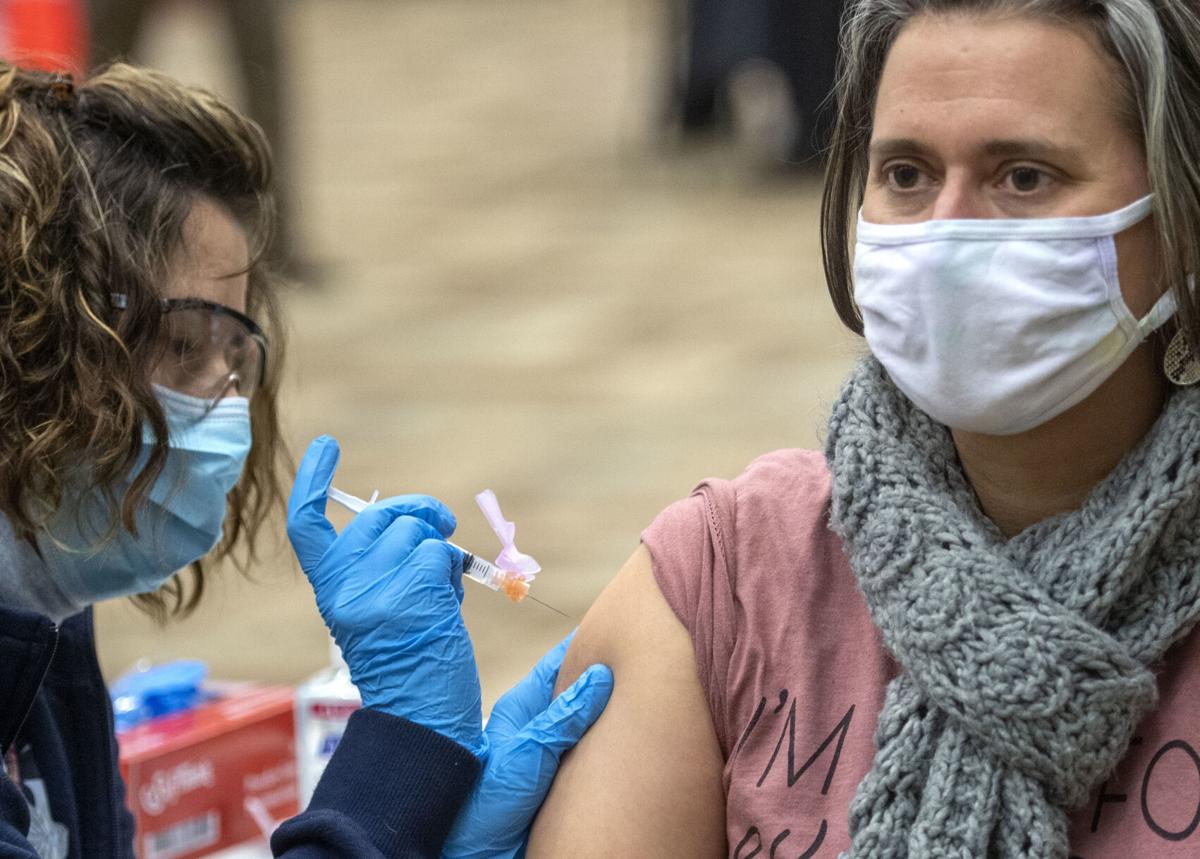 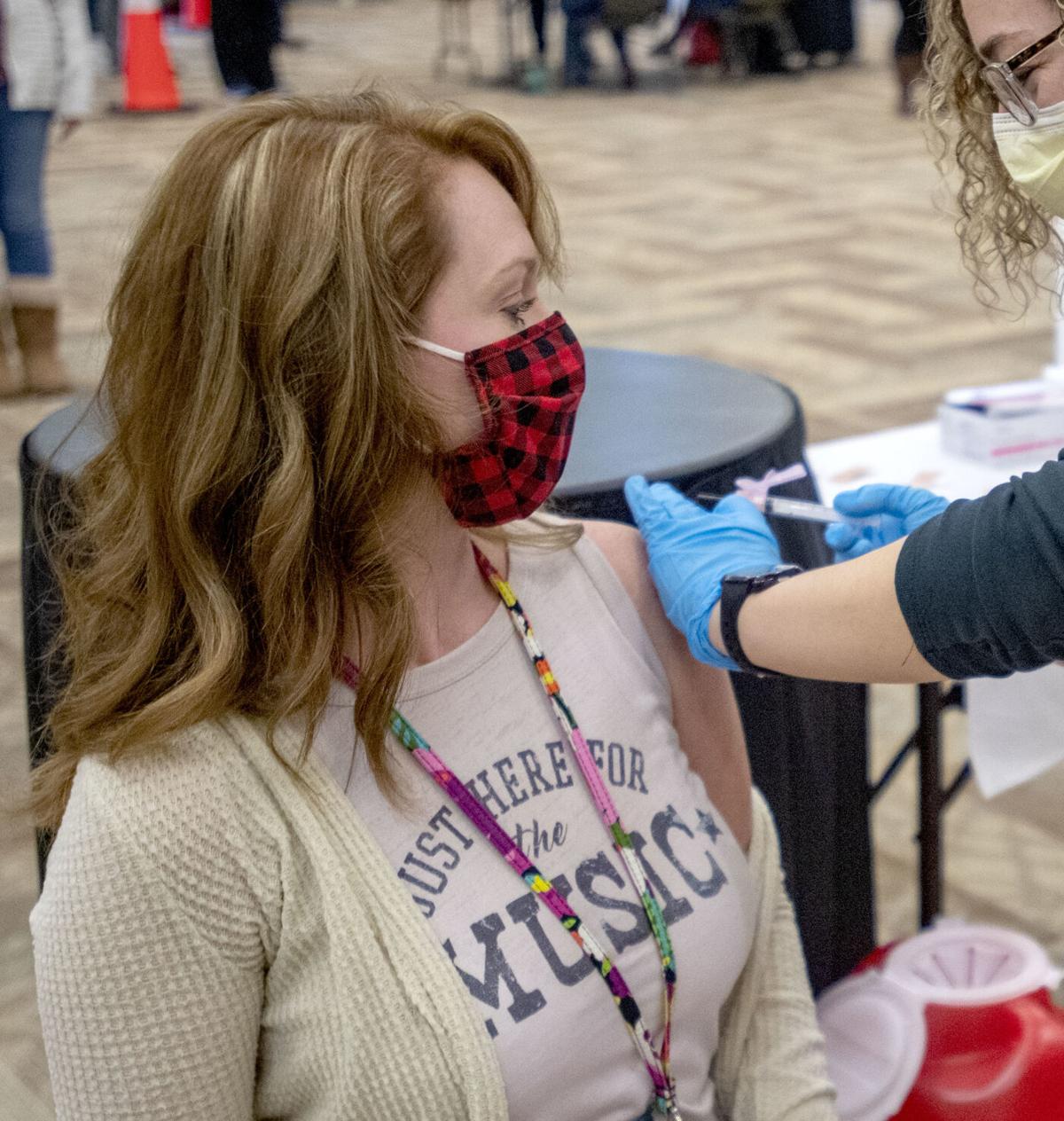 Sara Kate Tallman, who teaches at Van Pelt and Highland View Elementary Schools in Bristol, Virginia, gets her COVID-19 vaccine on Monday afternoon. 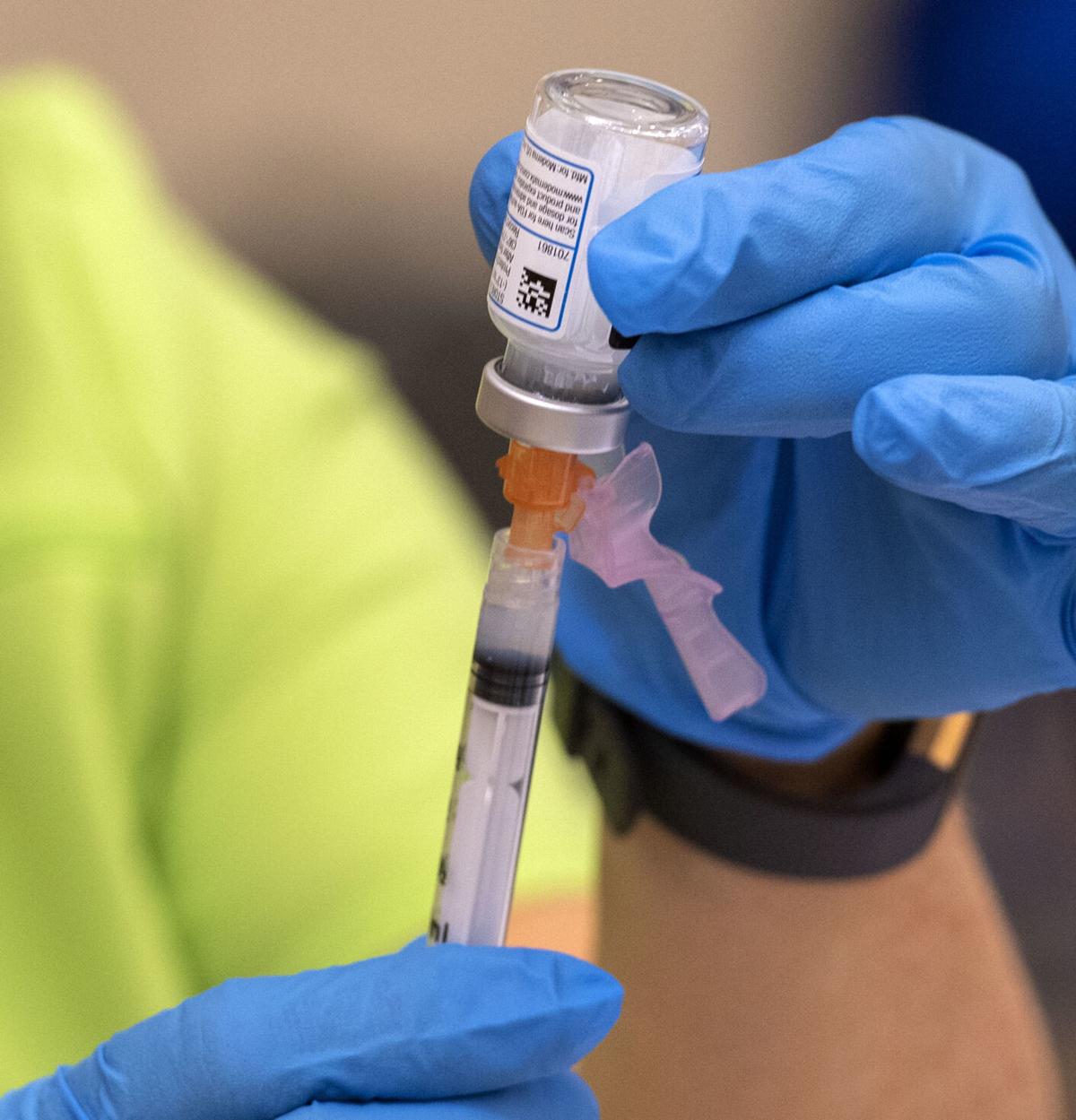 A nurse with Mount Rogers Health District and Virginia Department of Health draws a dose of the Moderna vaccine during a clinic on Monday to vaccinate teachers from Bristol, Virginia and Washington County, Virginia.

ABINGDON, Va. — Teachers, health care workers and other designees lined up inside and outside the Southwest Virginia Higher Education Center on Monday to receive their first of two installments of the Moderna COVID-19 vaccine.

More than 1,000 doses were distributed Monday, as the Mount Rogers Health District vaccinated teachers and school employees from Bristol and Washington County as well as others designated in the opening tiers of the state’s vaccination protocols.

“This is our first phase 1b POD [point of dispensing clinic] which is the remainder of law enforcement, fire, police, Hazmat, people who work in correctional facilities or homeless shelters and K-12 education staff for Bristol and Washington County,” according to Breanne Forbes Hubbard, Mount Rogers Health District population health manager.

“Our goal is to get through all of our first round of our education staff in the rest of our school systems this week. We will continue to have phase 1b PODs over the coming weeks to work through those priority groups in the order they were announced by the governor,” she said.

Each of the remaining clinics will disperse between 400 and 600 doses daily, and all are scheduled by appointment.

“I have a son and a family I want to keep safe. My students at school are very important to me,” Tallman said. “I have a lot of students who have needs and are disadvantaged.”

Tallman said she has some concerns about the vaccine, which was pressed through clinical trials during the second half of last year and came onto the market in December.

“I worry, like anyone would, but I have faith in the health professionals. And I have to trust that they know what they’re doing, just like I’m doing in my job,” Tallman said.

“I feel this [vaccination] may be the only way to slow this thing down. Once given the chance, I jumped on it,” Jones said. “That and plain common sense; doing what you’re supposed to do. Just common courtesy toward fellow human beings.”

Since the virus has prompted widespread online learning, it has changed the way schools operate.

“With us being virtual, there is very little attendance issues because of remote learning,” Jones said. “We try to make some contacts with the families to see how they’re doing. It’s about more than education at this point; it’s about well-being, so we check on the kids as best we can.”

“Always in the back of your mind you have a few thoughts about what could happen where some people have had some reactions from it, but you hope it doesn’t happen to you,” Lee said. “I think it’s important that you get it, now that they have it out there. I’ve been waiting to get it.”

The progressive rock music reverberates through Randy Smith. He hears the lyrics: “In and around the lake/Mountains come out of the sky and they stand there” as he navigates the curves leading to Hungry Mother. He feels like a kid waking up on Christmas morning.

ABINGDON, Va. — The Virginia State Police have identified a Glade Spring woman as the victim of a two-vehicle wreck that occurred Monday, Jan. 11, near Exit 19 of Interstate 81 in Abingdon.

ABINGDON, Va. — Ann McConnell didn’t seem to mind the brisk temperatures at the Abingdon Farmers Market last Saturday when she sold a fresh batch of sourdough bread to a steady stream of patrons, many of them her regular customers for years.

ABINGDON, Va. — With everyone stuck inside during the pandemic, an Abingdon stay-at-home mom has found a way to keep the family a central part of her daily life while also managing to bring in a few extra bucks.

Sara Kate Tallman, who teaches at Van Pelt and Highland View Elementary Schools in Bristol, Virginia, gets her COVID-19 vaccine on Monday afternoon.

A nurse with Mount Rogers Health District and Virginia Department of Health draws a dose of the Moderna vaccine during a clinic on Monday to vaccinate teachers from Bristol, Virginia and Washington County, Virginia.