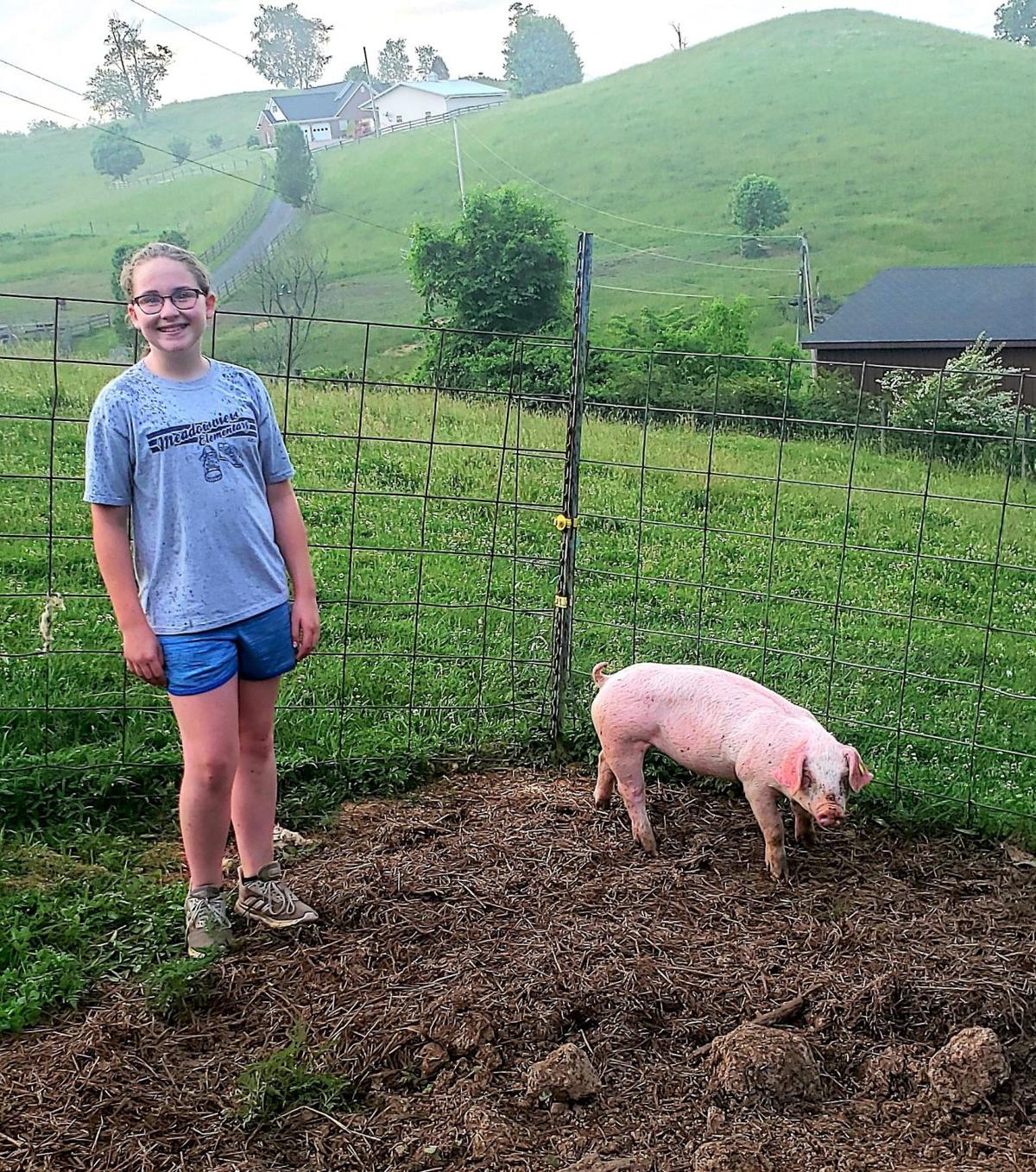 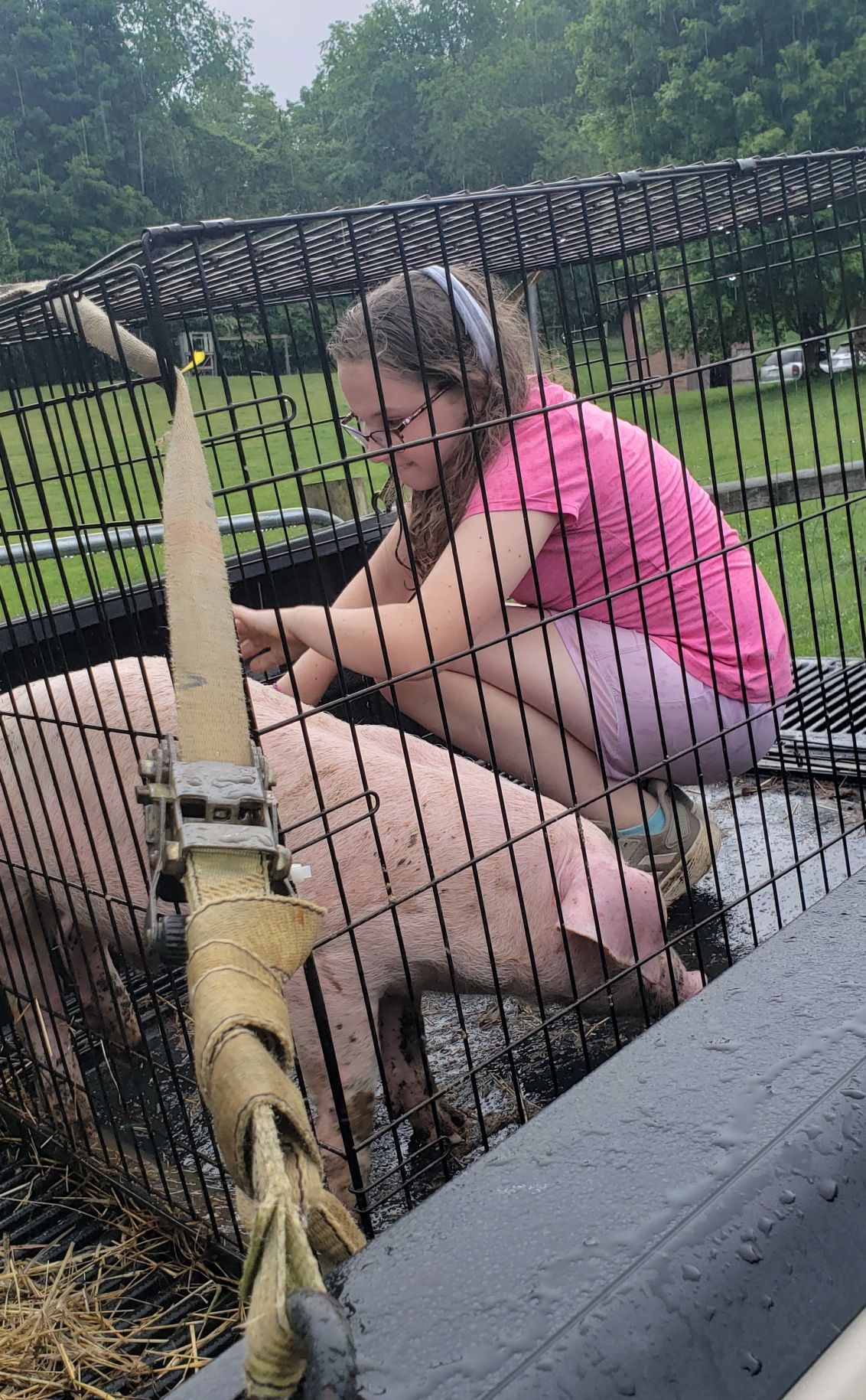 The day they brought Pancake home, 4-H member Carrie Alexander got inside the crate to help ease the pig's anxiety. 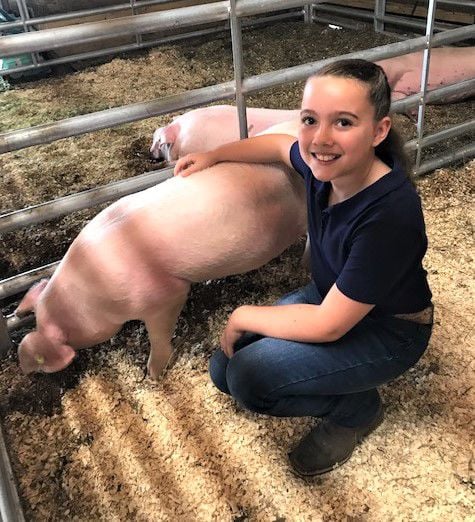 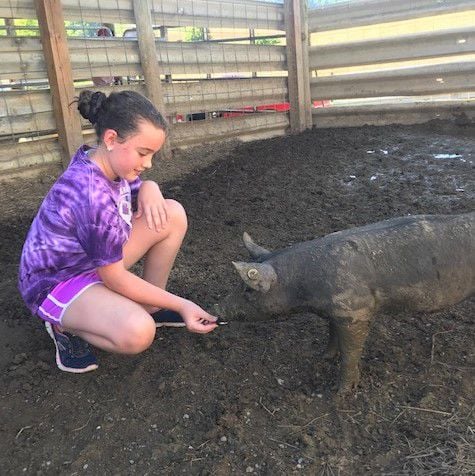 Mady at home with her new pig Sparkle this year. 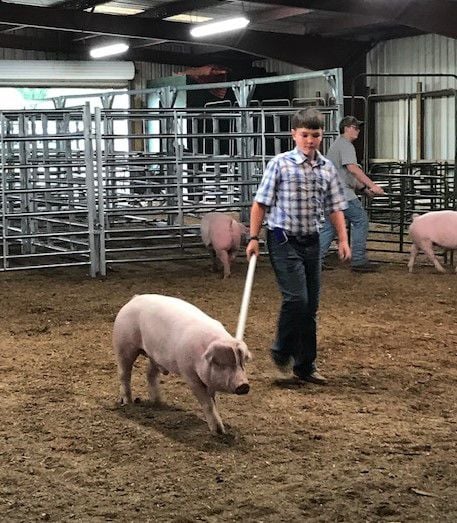 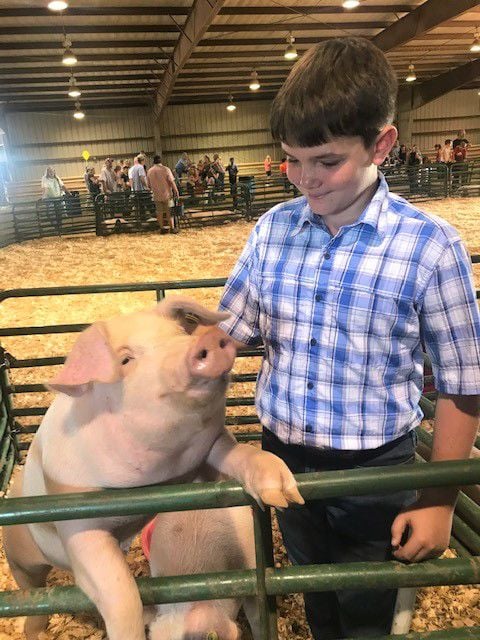 The day they brought Pancake home, 4-H member Carrie Alexander got inside the crate to help ease the pig's anxiety.

Mady at home with her new pig Sparkle this year.

ABINGDON, Va. — This little piggy will go to market, but not before Washington County 4-H youth have a chance to groom and train their hogs for showtime this fall.

It’s one of the first things the 11-year-old thinks about when she wakes in the morning on her Meadowview family farm.

“I feed him early in the morning, I spend time getting acquainted with him in the afternoon, and by evening, I feed and water him again,” said Carrie, who has been part of 4-H since she was 5. “I love having a pig to take care of. They’re so fun to interact with.”

For many youth, it’s not their first experiences raising a 60-pound shoat, a young, weaned pig. The hog breeds used for the 4-H project are Duroc, a reddish-brown hog with a large muscular frame and partially drooping ears, and Landrace, a white hog with a long body, fine hair, long snout and heavy, drooping ears.

Carrie said this is her fifth year participating in the local 4-H Market Hog Project. She chose the name “Pancake” for her new pet. “He’s adjusting very well to his new home. He’s a little cautious, but he will come to me.”

Carrie’s mother, Mary Jo Alexander, who showed cattle in 4-H when she was a youth, said she loves the 4-H projects because children are taught responsibility while learning about the agriculture industry.

“Everyone names their 4-H pigs things like Bacon and Sausage,” said the daughter, “so I thought naming my hog Pancake would fit well.”

The Washington County 4-H member is one of nearly 20 youth from ages 7 to 16 participating in the county’s 4-H Market Hog Project this year.

According to Crystal Peek, a Washington County Extension agent for 4-H, the youth will spend the next few months feeding, bathing and generally getting better acquainted with the pigs before competitions begin at the Washington County Fair in September and the State Fair of Virginia in October.

Peek said she’s noticing more excitement in 4-H projects this year — even for children who have been part of projects in the past.

“I think it’s because our quarantined children have been indoors with computerized learning, and now to have something hands-on and tangible is a welcome opportunity,” said Peek.

“After enduring months of COVID-19, I don’t think we are taking as much for granted these days.”

Peek said she witnessed some of that sense of adventure when the 4-H members received their pigs last week.

Peek said the 44 hogs designated for this year’s 4-H project traveled on trailers to Washington County from a farm in North Carolina. Some of the hogs were shared with 4-H partnership programs in Russell and Lee counties.

Despite the rain that day, the kids were excited to be handed over a new, squealing pig.

The show-quality hogs are purchased a few months before the shows, allowing the youth enough time to work with the animals every day.

“The pig project is really neat. We get the pigs at a young age, making it easier for the kids to work with them and get them accustomed to being handled,” said Peek.

“Since we’re a predominantly beef cattle area, we don’t see as many hogs on the farm. Having a pig to raise may be a little different than what the kids have done before.

“Feeding, training and bathing the pigs are important for helping to build relationships with the youth and their pigs.”

The hogs are purchased and owned by each participating family for $95 each.

Living high on the hog

Clint Wilson, 13, and his sister Mady Wilson, 10, have named their new pigs “Fred” and “Sparkle.”

This is Clint’s fifth year participating in the hog project and the second year for his younger sister.

It’s always a fun experience, they say, even when things don’t go as planned.

“One year while loading my pig onto the trailer, the pig turned around and bolted out. I rode that pig backwards for a good 10 seconds. I was scared to death while I was on the pig, but afterwards, I laughed my head off,” said the youth.

“The market hog project has been our favorite 4-H project,” said their mother, Sarah Wilson of Abingdon. “Our kids have learned so much from it, and they take their responsibilities very seriously. My husband Adam and I feel like it also has helped our children to build confidence in their own abilities.”

Fat as a pig

For the next few months, the participants will learn about feeding and showing their market hogs.They learn fairly quickly that offering treats to their pigs is a good way to get their attention.

Exercise is important for the health of the pigs, said the youth.

To prepare for the show ring, the pigs are taken for walks every day — not on a leash but by using a driving tool that helps guide their directions.

The youth teach the pigs how to change directions by gently tapping them on the jawline.

“This is called ‘driving a hog,’” said Peek. “To get your pig to turn, you want to tap on the opposite side that you are asking them to move. Tap on the right side of the head to go left, and the left side to go right.”

By fall, the 4-H members will be ready to enter the show rings with their well-fed, well-bathed, shiny project hogs.

All of the pigs have similar genetics, ages and sizes. This gives the 4-H participants the same baseline from which to start their work. During the shows, the youth are judged on what they’ve been able to accomplish with all of them starting at the same levels.

By showtime, the hogs no longer look like weaned pigs. They can weigh as much as 300 pounds.

The 4-H members show off their skills with their pigs in the show ring, in hopes of catching the judge’s eye and placing in competitions for showmanship and weight.

Although the show is a freeform style, it’s important to keep the pig between you and the judge at all times, said the young participants.

“While the kids love and care for the pigs, they do understand this is a project that is terminal. A few of the farm families may choose to keep the 4-H hogs, but most of the hogs will be turned into meat products,” Peek said.

“It’s hard to give them up at the end of the project,” said Clint.

Carrie said she doesn’t look forward to her hog being butchered, but she has grown accustomed to the procedure. “It has always bothered me a little bit because I get so attached to them, but after a while, you realize the meat is good, too.”