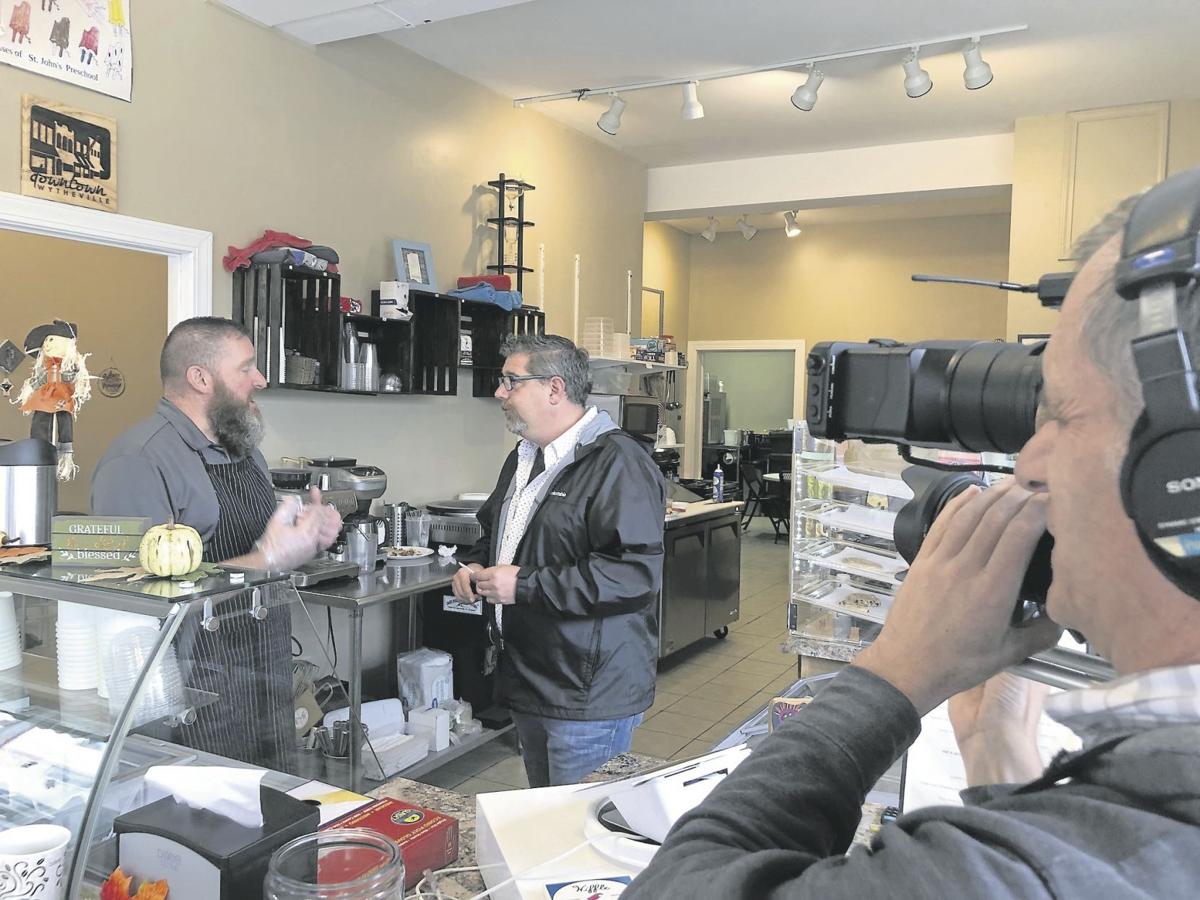 While in Wytheville, Erik the Travel Guy visited Wiffle Pops, where Dewey Newhouse, left, helped him make a berry crepe and served up some homemade gelato. Erik loved the maple bacon gelato. “It tastes like the future,” he said of the salty, sweet and creamy treat. “I’d marry it if I could.” 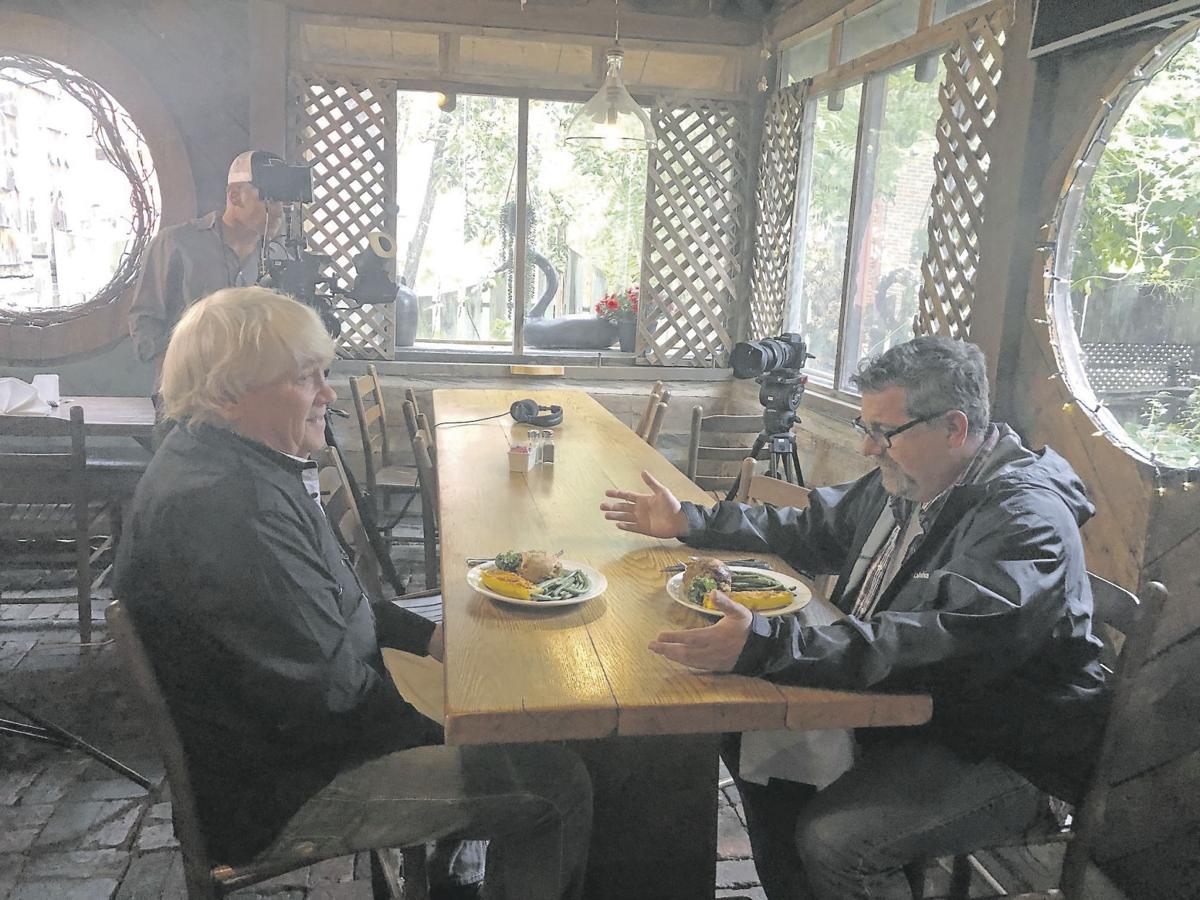 Erik Hastings, a.k.a. Erik the Travel Guy, interviews James Green, owner of The Log House, for part of his PBS show, “Beyond Your Backyard.”

Erik Hastings, also known as Erik the Travel Guy, has been all over the world thanks to his travel videos and nationally syndicated PBS show, “Beyond Your Backyard.”

Hastings has been to places like Rome in Italy, Athens in Greece, Cozumel and Cancun in Mexico, Montreal in Canada, the Bahamas and Jamaica. He’s also dropped in on numerous towns and cities across America.

“Interesting stories come in difference-sized packaging,” he said as he waited to chat with Log House owner James Green. “That’s what we are on the hunt for. During every shoot, we are always surprised by something. We don’t know where it will crop up, and we love that. That’s one reason I love doing the show.”

Wytheville will be part of season four of “Beyond Your Backyard,” which will begin airing next summer. The season will be a mix of small towns and big cities, Erik said.

In his shows, Hastings aims to help viewers get an idea about each place he visits by combining a variety of aspects about the area like history, culture, outdoor recreation, hands-on activities and food. A friendly and curious guy with a way with the spoken word, Hastings films what he sees and keeps his shows as authentic as he can.

“How does a place feel? That’s important to us,” he said. “Twenty-six minutes and 45 seconds is what we deliver.”

With a background in theater, radio and video production, Hastings launched his own production company in 2005. It specialized in creating high-quality, low-cost travel videos for online distribution. The business combines everything he enjoys by mixing video production, writing, discovery, adventure, performing and interacting with fascinating people in some of the most inspiring and beautiful travel destinations in the world.

In 2017, Hastings and his creative team began production on "Beyond Your Backyard," an educational travel series for Blue Ridge PBS. The series debuted in April 2018 on Blue Ridge PBS and other public broadcasting stations and quickly gained national attention and new affiliates. Today the series is seen by millions of viewers nationwide and is available to Amazon Prime members. In its first season, the series was honored by the industry with two EMMY awards for the show and its host. Hastings spends an average of about 25 weeks on the road per year.

Hastings traveled to Wytheville at the invitation of Rosa Lee Jude, Wytheville’s tourism director, whose department also developed an itinerary of locations for Hastings to visit and film.

“They have final editorial control, but we helped them develop the content of the episode,” she said in an email. “This was part of a recent Virginia Tourism Corporation grant that we received. It is part of our efforts to begin to showcase Wytheville to more of a national audience and further solidify Wytheville as a travel destination. We encouraged Erik and his team to focus on the idea to look "beyond the exits" and show all of the interesting things to experience that our area has to offer. This will be national exposure for our community on one of the most watched and trusted medias in the country, PBS. As you would expect from PBS, this show endeavors to educate their viewers about great places to visit. Erik and his team were very impressed with what our small town has to offer.”

Jude said Hastings’ visit is part of a bigger marketing plan to bring a new type of visitor to the area and take tourism to the next level as a part of economic development.

“We are also working on an extensive public relations plan which will include more travel writers and journalists visiting to reach a broader audience of potential travelers,” Jude said.

So, what was Hastings’ favorite Wytheville moment?

“Just seeing the care that the animals get,” he said. “They are living their best lives.”

He said he enjoys homegrown attractions like the animal park because they have a purpose and serve the community.

“They are fueled by those who are proud of their town and take care of visitors,” he added. “To me, that’s a home run.”

For more information on Hastings and his shows, visit online at www.erikthetravelguy.com. He and “Beyond Your Backyard” also have Facebook and Instagram accounts.

A veterinarian in Switzerland who developed the first elbow replacement for dogs is coming to America to donate his expertise for a local service dog.

County to look at Apex lease

New Marion residents are bringing a different kind of art gallery/studio to the community while paying tribute to a bit of history.

ABINGDON, Va. — Dustin Blevins does not mind dog-doo on his shoes. That just comes with the job of operating Abingdon Poop Scoopers, a freelance gig that Blevins, 35, created to supplement his income as an IT analyst for a tractor company in Abingdon.

ABINGDON, Va. — Two hundred people will get a free Thanksgiving meal — no questions asked — thanks to an Abingdon restaurant owner.

GLADE SPRING, Va. — Just after noon Friday, smoke still rose from the charred, collapsed remains of a house near Glade Spring that was destroyed by a fire that killed an elderly husband and wife.

ABINGDON, Va. — At 86, Harold Hannah dusted off his Christmas tree yard sign last week in preparation for another season of greeting local families who want a real tree for the holidays.

While in Wytheville, Erik the Travel Guy visited Wiffle Pops, where Dewey Newhouse, left, helped him make a berry crepe and served up some homemade gelato. Erik loved the maple bacon gelato. “It tastes like the future,” he said of the salty, sweet and creamy treat. “I’d marry it if I could.”

Erik Hastings, a.k.a. Erik the Travel Guy, interviews James Green, owner of The Log House, for part of his PBS show, “Beyond Your Backyard.”