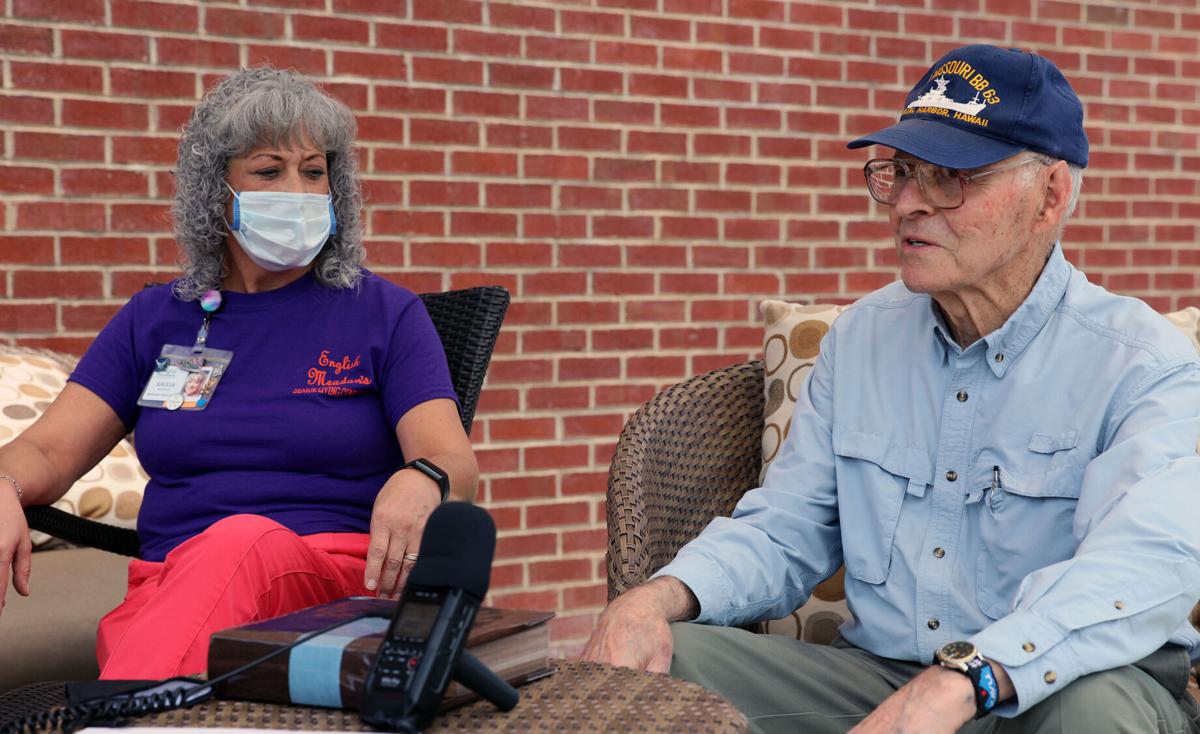 Raissa Hatfield (left), who works at English Meadows, an assisted living facility, listens as her friend, Wilford Corbin, 93, recollects his life in Alaska, where he worked as a teacher. Hatfield grew up in the area where Corbin taught. 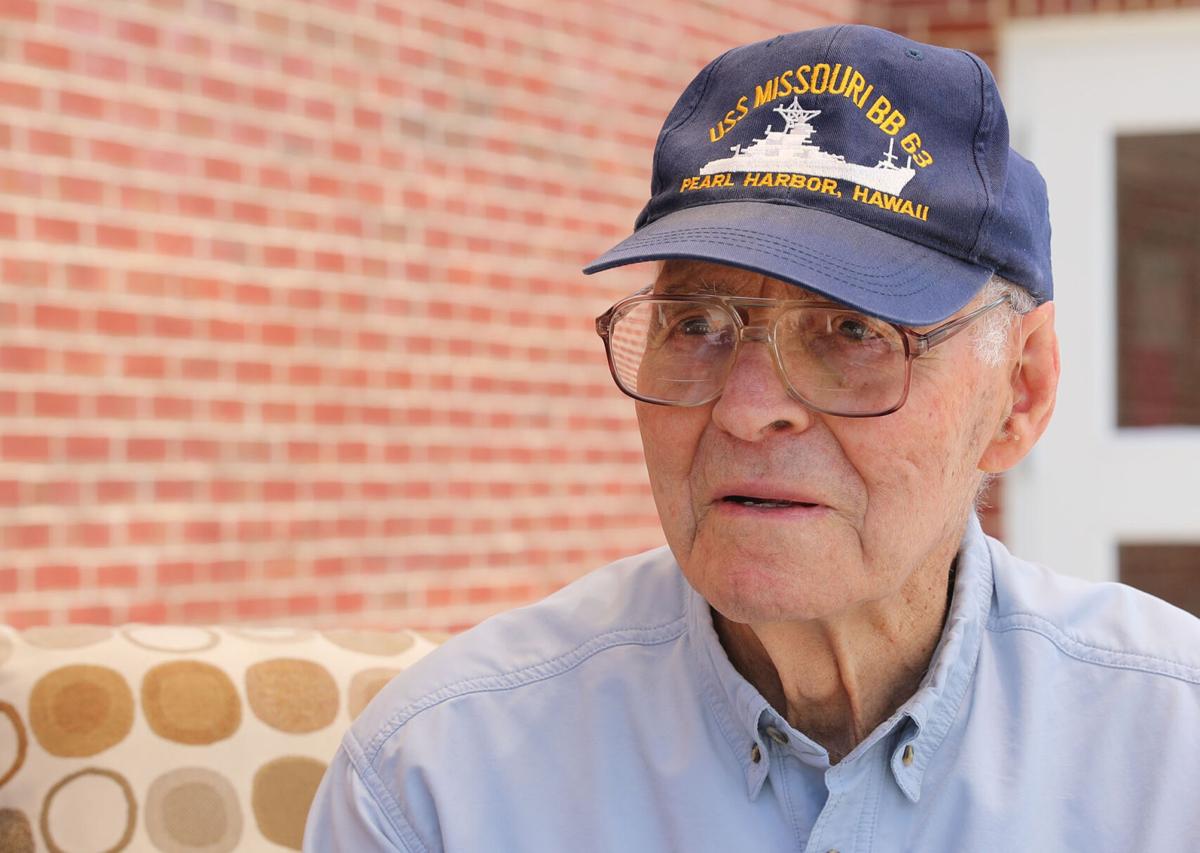 Wilford Corbin, 93, has seen the world, but when he was isolated at his assisted living facility by COVID-19, Corbin was stuck indoors, away from his loved ones. Corbin and a nurse struck up a friendship based on their mutual love for Alaska. 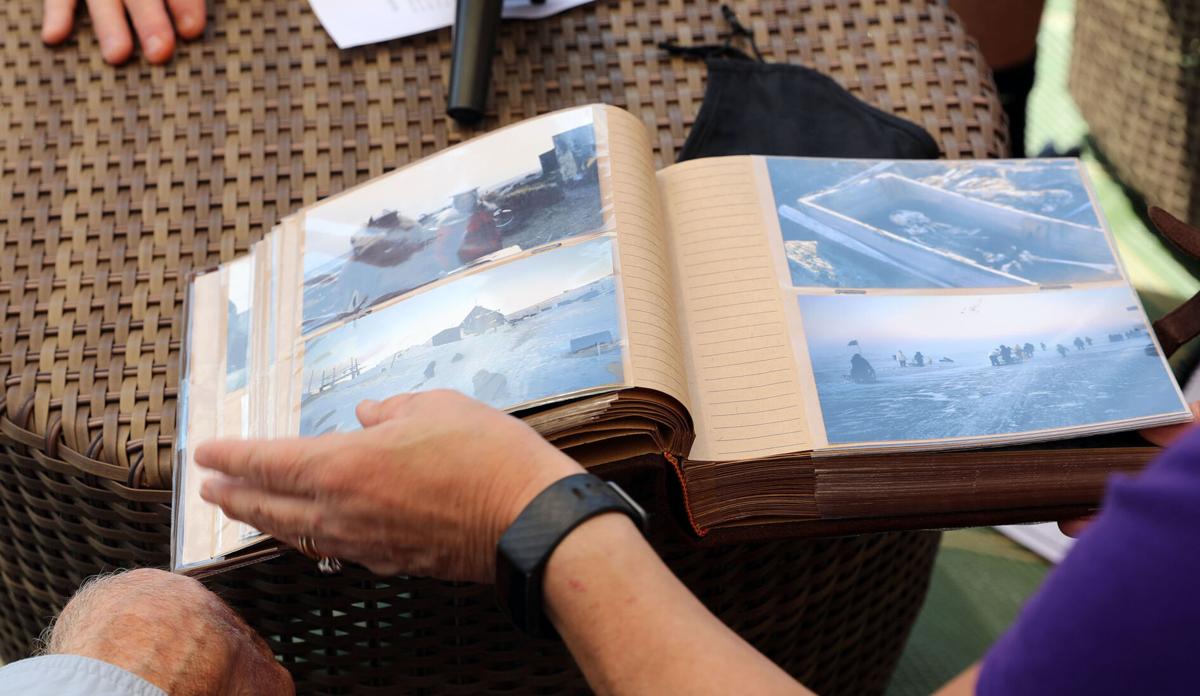 Raissa Hatfield flips through Wilford Corbin’s photo album of images taken when he lived and taught in Alaska. Hatfield grew up in the area where he taught school.

ABINGDON, Va. — When the country shut down for COVID-19, Wilford Corbin, 93, a resident at English Meadows, an assisted living facility in Abingdon, suddenly found himself separated from his family. It was a confusing, lonely time for the nonagenarian, whose life script focused on adventure and purpose.

For several years in his younger days, Corbin was a teacher and school administrator in remote villages in Alaska, near the Bering Sea, where he and his wife raised a son and a daughter. Later, he returned to the lower 48 and worked at a school on the Cherokee reservation and other schools in his home state of North Carolina. Always one to stay physically active, after he retired Corbin was a volunteer worker on the Appalachian Trail, clearing brush and making improvements on sections of the trail for many years.

“They called me the axe man,” he said.

But then came the pandemic of 2020 and isolation from the outside world. All he could do was look upon the mountains from the windows of English Meadows and talk to his family via phone and video chats.

But the situation improved when Corbin crossed paths with Raissa Hatfield, a nurse who came to work at the facility last summer. The two took very different paths to Abingdon, but their life journeys had a common denominator: Alaska.

In July 2020, Hatfield started her new job. She had been a legal assistant in South Carolina for several decades, immersed in the lives of those who scoffed at the law. The job wore her down.

“The criminals in the area finally did me in, so I came here. I needed something different,” said Hatfield.

Yet the switch to work at an assisted living facility, particularly during the time of COVID-19, proved difficult, too. She had to wear a mask all the time. She worried about contracting or passing on the coronavirus. Hatfield needed a friendly face in her life as much as Corbin did, she said.

A medical technician at English Meadows told her about Corbin and how he taught school in Alaska. Having been born in Alaska and spending a large chunk of her childhood there, she introduced herself to him as soon as she could.

The pair discovered a series of connections that, as Hatfield noted, amplifies the notion that the world “truly is a small place.”

As their conversations continued, the nurse learned that Corbin taught in a school not far from the remote Bering Strait island where she was born. And there was more: in 1959, Wilford was at the statehood parade, where Hatfield’s mother, who had recently won the title of Miss Alaska, was the parade’s grand marshal; that Corbin knew much about the Aleut customs and practices of native Alaskans; that seal was a part of the diet, a regional delicacy that neither he nor Hatfield cared to eat.

“Once I met Mr. Corbin, I felt close to home,” said Hatfield. “It is easy for people to say they have seen something about Alaska on television or something like that. But there are not many people that can say they know what we did up there and how we lived. He knows what home is,” Hatfield said.

“When Mr. Corbin was able to recall being at the same parade that my mother was at, that brought us even closer together,” she added.

Corbin, whose mane of white hair is perfectly combed, said he loved his time in Alaska. His frame is slightly stooped, and his memory, he admits, isn’t “what it used to be,” but it’s clear he hasn’t forgotten his time in America’s most northern state.

“I wanted an adventure,” he said. In 2000, he wrote a book “A World Apart: My Life Among the Eskimos of Alaska,” which tells his stories of living in the cold northland. After success with his first book, Corbin wrote another one in 2015 about growing up in Appalachia. That one is titled “The Boys of Battle Branch: Growing Up in Appalachia Shaped Our Lives.”

Corbin was born in October 1927 in Franklin, North Carolina. After high school, he served in the Navy during the Korean War on the USS Cavalier, the USS Gen. William Mitchell and the USS Missouri. After his service, he enrolled at Western Carolina Teachers College (now Western Carolina University) to earn an education degree. He began his teaching career not far from where he grew up but soon decided his destiny awaited in Alaska.

He moved to Wales, Alaska, where he served as both principal and teacher at a Bureau of Indian Affairs school. After three years, he returned to North Carolina. While he was home, he received a telegram from Anchorage, asking if he wanted to come back to teach.

“I told my wife we got to flip a coin to decide if we were going to move again. And, well, Alaska won,” he said, a soft smile lifting the corners of his lips.

Corbin’s kids went to the local Eskimo schools. By the time his son was in fifth grade and his daughter was about to be in first grade, it was time to come back to North Carolina.

“I did not leave Alaska because I did not like it. We moved because it was for the children. I couldn’t teach them anymore, especially when it came to the Eskimo language.”

On the other hand, Corbin’s daughter, Paula Kahn, wanted to stay in Alaska.

“My brother and I wanted to stay and go to school in the Eskimo village. We loved it there, and we definitely did not want to come back. I remember thinking maybe if I sang the Alaska state song enough, maybe they would feel sorry for us and stay.”

The nurse, Hatfield, also moved to the lower 48. At 14, she moved to South Carolina to be with her father.

“When I moved to South Carolina, it was a real culture shock. And for Mr. Corbin to leave this side of the country and willingly go to Alaska, to a place where many people did not even speak English. That is amazing to me,” said Hatfield.

Even though she does not work in the same section of the assisted living facility, Hatfield said she and Corbin try to meet up once a day in passing.

“He really is a good soul. He always has a smile on his face. It is really nice to be able to see that.”

Noah Baughman is one of several Middle Tennessee State University journalism students who are spending 16 days in the area writing feature stories for the Herald Courier.

Arrested on June 13 in Rural Retreat and charged with assaulting a woman he was living with, a Wytheville Police Department patrol officer was…

A 13-year-old boy was flown to Johnson City Medical Center following a fall from an about 40-foot embankment that left the child with head injuries and a badly broken leg.

A 13-year-old boy died at the scene of a car crash on Rt. 16 in Smyth County Thursday. Three other individuals were injured in the two-vehicle collision.

A man died this afternoon in a motorcycle crash on the Back of the Dragon.

A teen sustained serious injuries in a fall from a steep embankment in Marion this afternoon.

Kendra Hayden began helping work to bring the Speyside Bourbon cooperage and stave mill to Smyth and Washington counties when the project was just a possibility.

School's out for Smyth retirees

School’s not only out for summer, but possibly forever for most of a fairly large group of retirees ending their careers with a reception and …

When Bland County High School handed out diplomas to the 64 members of the Class of 2021 on May 29, five students already had associate degree…

Raissa Hatfield (left), who works at English Meadows, an assisted living facility, listens as her friend, Wilford Corbin, 93, recollects his life in Alaska, where he worked as a teacher. Hatfield grew up in the area where Corbin taught.

Wilford Corbin, 93, has seen the world, but when he was isolated at his assisted living facility by COVID-19, Corbin was stuck indoors, away from his loved ones. Corbin and a nurse struck up a friendship based on their mutual love for Alaska.

Raissa Hatfield flips through Wilford Corbin’s photo album of images taken when he lived and taught in Alaska. Hatfield grew up in the area where he taught school.