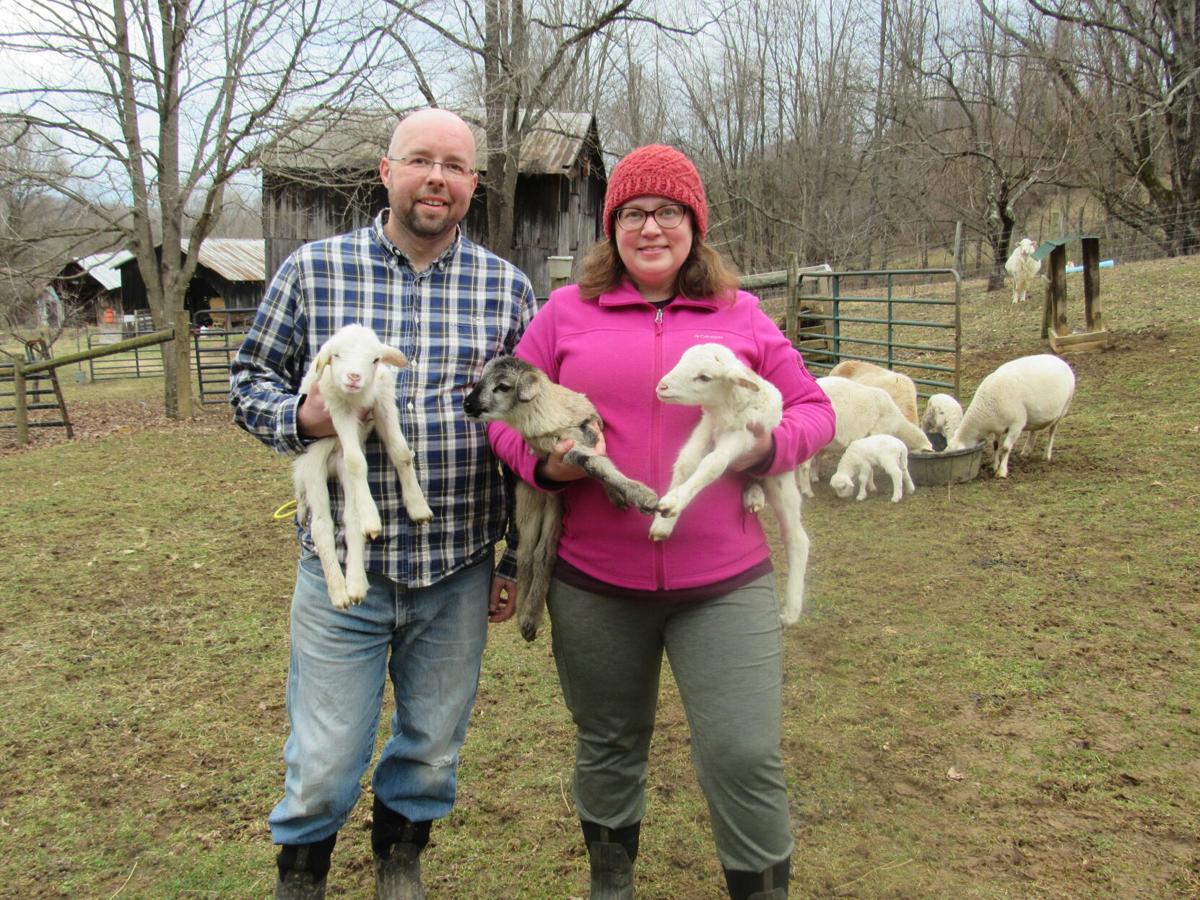 Although not full-time farmers, Joseph Vess and Emily Robinson, of Meadowview, have made a happy farm life since moving to the area six years ago. 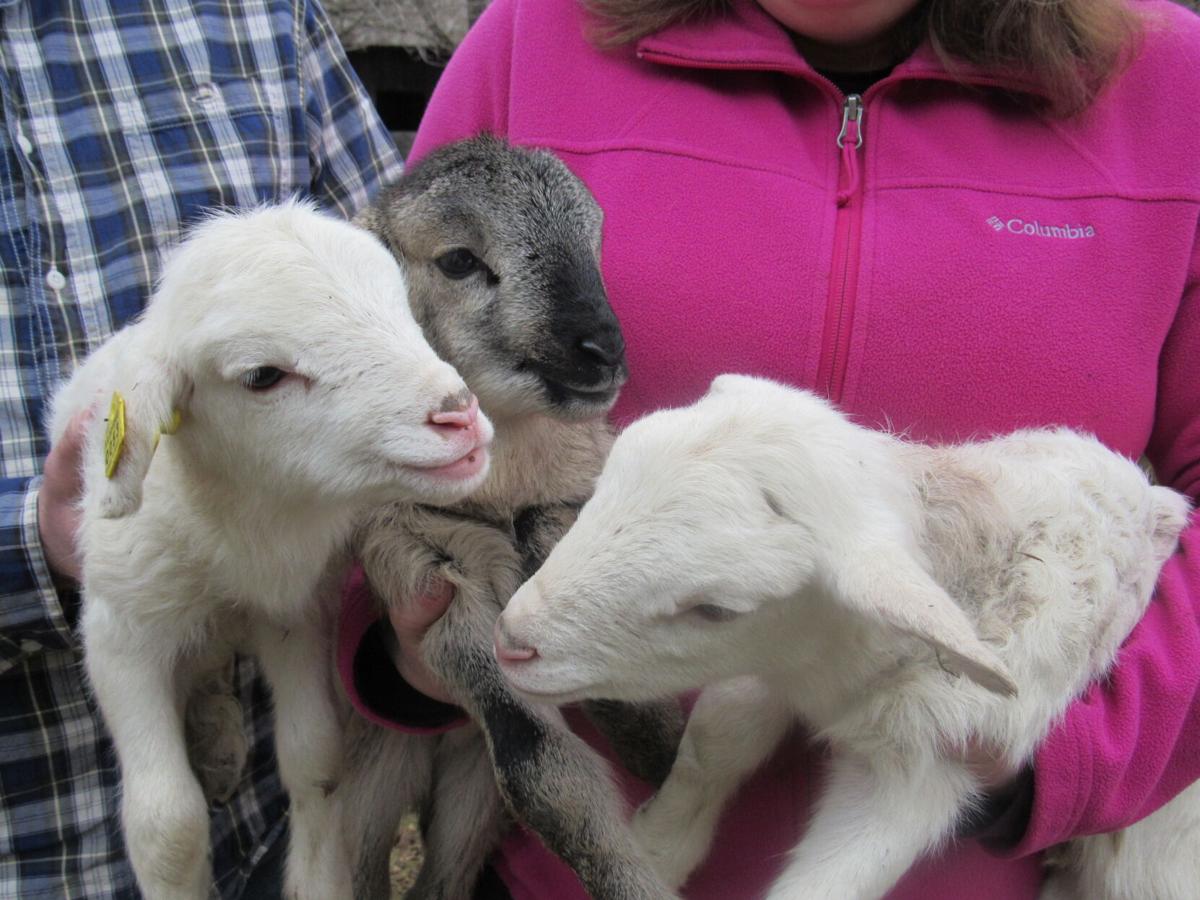 Joseph Vess and Emily Robinson welcomed three sets of triplets from their flock of Katahdin hair sheep in the span of a few days. “It was a nice surprise package,” said Emily. 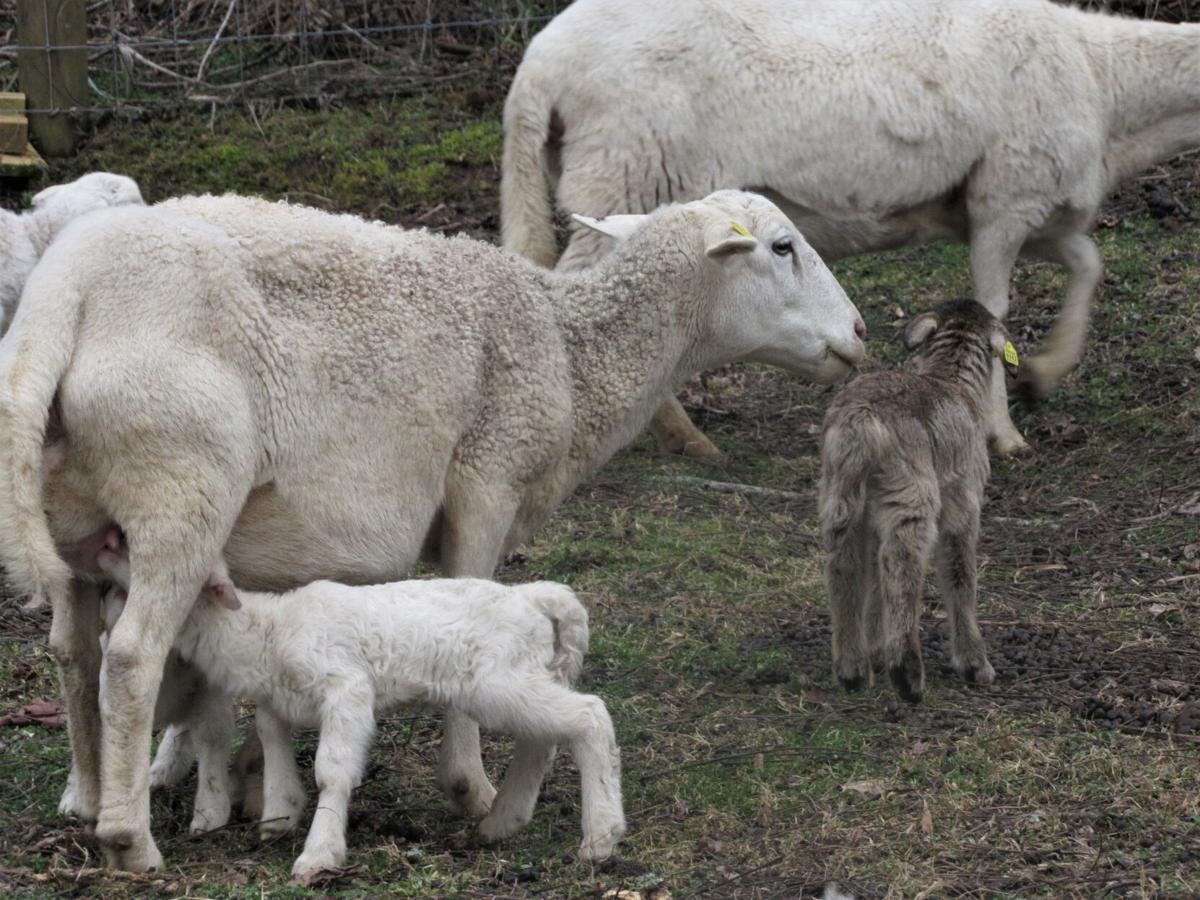 While triplets can be challenging for a single ewe to feed, one of the lambs’ mothers seems to have allowed another ewe who lost her lamb to nurse a triplet. “That’s really good for both of them,” said Joseph.

MEADOWVIEW, Va. — Like good shepherds, Joseph Vess and Emily Robinson keep a watchful eye on their small flock of Katahdin hair sheep when lambing season rolls around this time of year.

Counting sheep is a routine thing to do each morning and night, they say.

But when the Meadowview couple awoke one morning last week, they found one of their ewes had delivered triplets.

“It was a nice surprise package,” said wife Emily.

“We couldn’t believe that we had three sets of triplets.”

While sheep normally can deliver one to three lambs, it may be a less common occurrence for a small farm with only 10 ewes, according to Mandy Fletcher, regional program specialist for the Virginia State University Small Farm Outreach Program.

“It’s not considered rare for ewes to have multiple sets of triplets, but instead it’s an indication the sheep are healthy,” said Fletcher. “It’s all based on good nutrition that the ewes have received at the time of breeding and prior to lambing, as well as great management practices at the farm. Also, certain breeds are more likely to have multiple births, such as Katahdin hair sheep.”

Fletcher said plenty of recent rainfall in the region, which produces rich forage, may be credited for causing greater fertility in the sheep.

In any case, the couple, both 41, is just happy their new “babies” are doing well and growing.

Even animals’ natural instincts work together for the good sometimes.

Joseph said one of their ewes gave birth to a single lamb before a nighttime predator snatched the newborn.

He later noticed that the ewe that had most recently given birth to triplets let the grieving mom have one of her lambs to nurse.

“That’s really good for both of them. The mother of the triplets won’t have to come up with enough milk for three, and the other ewe’s milk will be put to good use,” he said.

The part-time farmers moved to the area six years ago with a desire to be part of the local agriculture industry.

“We knew we wanted to do some kind of farming and raise animals. Cows seemed very intimidating, so we opted for sheep primarily because of their size,” said the husband. The couple has been known to haul a sheep or two in the back of their Subaru Forester or Honda Fit.

The couple says they are making money but not quite a living from their agriculture ventures.

Joseph works at Emory & Henry College, where he supports student community engagement for the Appalachian Center for Civic Life. Emily, who worked in outreach at the Washington County Public Library before the pandemic, is homeschooling their 5-year-old son Thomas.

Thomas is incorporating the family’s sheep business into his language arts assignments by keeping a journal of the ewes and their offspring.

And it’s been a “wooly” good time for the new farmers.

Neither of them was raised on farms, but they have decided they prefer their farm life. In addition to raising sheep, they also enjoy having laying hens and a kitchen garden in the summer.

The couple says they gained newfound appreciation and respect for farmers once moving to Southwest Virginia.

“I didn’t realize how intellectually demanding being a farmer is until we started raising sheep. You have to have some knowledge in veterinary medicine, soil science, plants, parasites, genetics, animal behavior, and, of course, it helps to learn about weather.

“You have to figure out why animals act the way they do and why you can’t make them do what you want,” he said with laughter. “Farmers get nowhere near the credit they deserve for the work they do.”

Learning how to raise sheep has been what you might say a “hair-raising” experience for them.

“The main thing I’ve learned is how much I don’t know,” laughed Joseph.

“The agriculture community of Washington County is so incredible. There are so many people who are generous with their time and knowledge, and that’s incredible to be part of.”

They will be partnering with Fletcher to work closely with beginning farmers to assist them with understanding the challenges and benefits of creating and sustaining a small farm.

“After receiving so much help, we can start giving back to other people and share what we have learned,” said Joseph.

“We have a wonderful agriculture community in Southwest Virginia, and we love being part of it. We want to help make it successful and accessible to as many people as possible.”

Although not full-time farmers, Joseph Vess and Emily Robinson, of Meadowview, have made a happy farm life since moving to the area six years ago.

Joseph Vess and Emily Robinson welcomed three sets of triplets from their flock of Katahdin hair sheep in the span of a few days. “It was a nice surprise package,” said Emily.

While triplets can be challenging for a single ewe to feed, one of the lambs’ mothers seems to have allowed another ewe who lost her lamb to nurse a triplet. “That’s really good for both of them,” said Joseph.