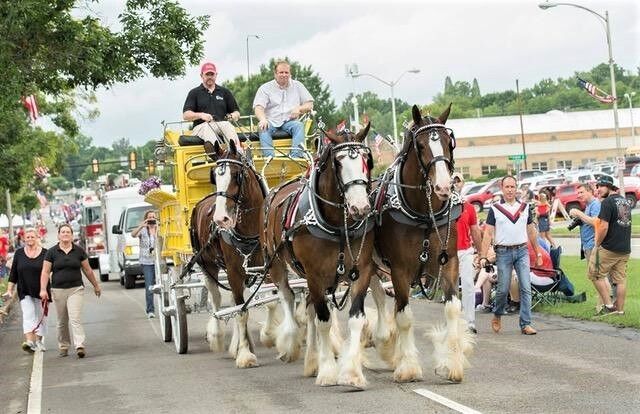 A highlight of the annual summer show hosted by Old Glade Antique Tractor Association will be the display of the Auction Clydesdales horses owned by Bart Long and Associates Realty and Auction. The horses will be shown throughout the day on Saturday, June 19, at Fairview Homestead. The show runs June 17, 18, and 19. 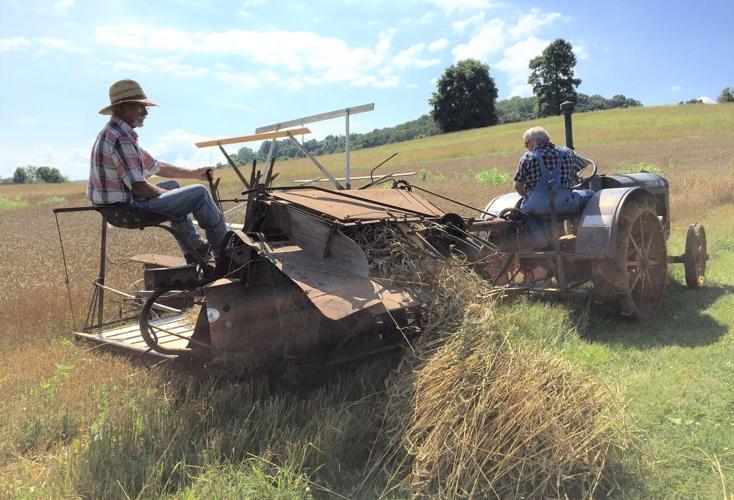 ABINGDON, Va. — The rumble of old machinery may not be the only sound filling the air at Fairview Homestead, when the Old Glade Antique Tractor Association hosts its annual summer show at the living history farm.

The 14th annual show set for June 17, 18 and 19 on Hillman Highway in Abingdon will be highlighted by the display of the Auction Clydesdales horses owned by Bart Long and Associates Realty and Auction. The horses will be on view throughout the day on Saturday.

The three-day show begins each day at 8 a.m. and closes at 4 p.m. Admission is free, but donations are encouraged.

Long said his realty and auction company uses the horses as ambassadors for the business, often showcasing the majestic horses at fairs, parades and other events.

The bay-colored horses are 19 hands tall and weigh approximately 2,200 pounds each.

The horses and equipment are moved in a custom 53-feet Featherlight semitrailer built to haul the horses, harness and wagon.

Long’s display also will include a classic yellow hitch wagon built in 1908 by the Studebaker Brothers Co. in Chicago. The wagon was restored by Lawrence Wagon Works in 2010.

According to Long, the wagon is one of only a few such wagons left in the country today.

After having to cancel last year’s summer show due to the pandemic, Ron Stevenson, president of the nonprofit organization, said this year’s event is turning out to be one for the books.

In addition to the Auction Clydesdales attraction, Blue Ridge PBS will be on hand to film demonstrations of antique farm equipment at Fairview Homestead, including a sawmill, threshing machine and blacksmith shop. According to Tenille Montgomery, community relations specialist for the Town of Abingdon, the broadcasting company has received monies from the Virginia Tobacco Commission to cover feature stories on Southwest Virginia.

The cabin at Fairview also will be on display for public viewing all three days. Farm equipment demonstrations will take place throughout the weekend.

Brad Nelms of BSN Rodeo Co. will also bring a bull, horses and ponies for exhibition.

Stevenson anticipates the summer show will attract visitors from Virginia, West Virginia, Kentucky, Tennessee, North Carolina and South Carolina, many of whom will bring antique tractors to display at the event.

He believes as many as 160 antique tractors will be part of the show.

Stevenson said there is no fee for anyone who wants to bring an antique tractor, small engine, car or truck to the show. “That includes even an antique lawn mower. Around here, we call it anything that you can push, pull or drag.”

Each day during the show, there will be a “parade of power” where owners of the machinery will ride around the Fairview grounds on their antique tractors.

Members of the tractor association will set up as vendors, selling antiques and tractor parts.

Susie Q’s Dream Kitchen from Church Hill, Tennessee, will sell food during each day of the event.

According to Stevenson, the summer show is the tractor association’s largest fundraising event each year.

“We took a big hit in fundraising last year because of COVID-19. The summer show last year was canceled, and we were not able to ask for financial support because a lot of businesses were struggling, too,” he said.

Donations garnered from this year’s event will be used for continuing projects at Fairview.

The tractor association currently is raising money to build a period-correct general store that will represent the 1850s era.

“We want to use the store to display antiques that have been donated to us. It also will be a focal point for any events we host at Fairview,” he said.

Stevenson said their summer show focuses on the history of the region and what life was like in the late 1800s.

“A threshing machine was usually owned by one person in the community who traveled from farm to farm threshing wheat. It takes about six people to run the machine, which required farmers working together,” said Stevenson.

“The farmers then took the wheat to a local water mill on the river, where it was ground into flour for winter’s use.”

Stevenson said because of distances between farms, most farmers had their own blacksmith shops and learned to do their own repairs.

Many local communities had a sawmill, similar to the one that was donated to the tractor association in 2014 from the Briscoe family of Abingdon.

According to Stevenson, much of the lumber donated to the nonprofit organization is cut with the old A.B. Farquhar circular sawmill and used for projects at the living history museum.

The log cabin at Fairview was built in 1812 by the Hagy family, who came from Germany to settle in Pennsylvania, later traveling on horse wagon trails to Southwest Virginia. After settling in Abingdon, they formed Hagy Wagon Co., which was located in downtown Abingdon. The family lived on the Fairview property, raising 12 children in the log home.

In one of the biggest days of this year's primary campaign season, red-state Kansas rejected a measure that would have made it easier to restrict abortion, and voters in Missouri repudiated a scandal-tarred former governor seeking a Senate seat. Meanwhile, a Republican congressman who voted to impeach former President Donald Trump after the Jan. 6 insurrection lost to a Trump-backed opponent early Wednesday, while two other impeachment-supporting House Republicans awaited results in their primaries in Washington state. In Michigan, a political newcomer emerged from the state’s messy Republican gubernatorial primary, setting up a rare woman-vs.-woman general election matchup between conservative commentator Tudor Dixon and incumbent Democratic Gov. Gretchen Whitmer.

A Wisconsin couple has died following last night's lightning strike across the street from the White House. Two other people were injured.

A Mormon church "help line" was created to report and stop sexual abuse. Instead, the system may bury accusations against some members, allowing abuse to persist.

Conspiracy theorist Alex Jones arrived at the start of his Texas defamation trial for calling the 2012 Sandy Hook Elementary School attack a hoax with the words “Save the 1st” scrawled on tape covering his mouth. Jones says the case is an assault on the First Amendment. Lawyers for the parents suing him say his repeated false claims about the shooting fall well outside the bounds of protected speech. Jones appeared to sabotage his chance to fully argue that his statements were protected by refusing to turn over evidence to the plaintiffs. That led the judge to essentially declare the plaintiffs the winner before the trial began. Instead, the trial is about how much Jones must pay.

Eli Lilly and Co. and the administration of President Joe Biden have condemned Indiana’s new ban on abortions. White House Press Secretary Karine Jean-Pierre in a statement Saturday said Indiana's Republican legislators have “put personal health care decisions in the hands of politicians rather than women and their doctors.” Lilly says it's concerned the law will hinder the company's and Indiana’s “ability to attract diverse scientific, engineering and business talent from around the world.” The law lifts the ban in cases of rape or incest and to protect the life and physical health of the mother. It takes effect Sept. 15.

Indictments show U.S. companies are supplying a market for fins that activists say is as reprehensible as the now-illegal trade in elephant ivory was.

Asian shares fall on worries about Pelosi's visit to Taiwan

Asian shares are mostly lower amid concerns about regional stability as an expected visit by U.S. House Speaker Nancy Pelosi to Taiwan prompted threats from Beijing. Benchmarks headed downward across the board in the region in early trading, including Japan, China, South Korea and Australia. Communist-ruled China sees Taiwan as its own territory and has repeatedly issued warnings against her visiting the island democracy. Pelosi, who heads the legislative branch of the U.S. government, has said she is visiting Singapore, Malaysia, South Korea and Japan for talks on a variety of topics, including trade, COVID-19, climate change and security. Stocks finished lower on Wall Street.

Ellen Pompeo cutting back on her 'Grey's Anatomy' episodes

Dr. Meredith Grey will be cutting back her workload next season on “Grey’s Anatomy.” Series star Ellen Pompeo is set to appear in eight episodes of the hospital drama, about a third of the usual per-season number. Pompeo is reducing her commitment as she prepares to star in an untitled limited series for Hulu. The drama is based on the real-life story of a tangled adoption case involving U.S. parents and a Ukrainian-born child. Pompeo is one of the few original remaining “Grey's Anatomy” cast members, which include Chandra Wilson and James Pickens Jr. The ABC series returns Oct. 6 for its 19th season.

Dems change some tax provisions as they ready economic bill

Senate Majority Leader Chuck Schumer says Democrats have made changes in their giant economic bill that include paring part of their proposed minimum tax on huge corporations. Schumer described some of the revisions Friday as Democrats lined up the votes needed to deliver a campaign-season victory to President Joe Biden on his domestic agenda. Schumer also said bargainers dropped a proposed tax boost on hedge fund executives after pivotal centrist Sen. Kyrsten Sinema of Arizona said she would otherwise vote “no.” Schumer said the package would instead levy new taxes on companies that buy back their own stock.

Police say Republican U.S. Rep. Jackie Walorski was killed Wednesday in a car crash in her northern Indiana district along with two members of her congressional staff and another person. Get more info on that and more trending news here.

A highlight of the annual summer show hosted by Old Glade Antique Tractor Association will be the display of the Auction Clydesdales horses owned by Bart Long and Associates Realty and Auction. The horses will be shown throughout the day on Saturday, June 19, at Fairview Homestead. The show runs June 17, 18, and 19.