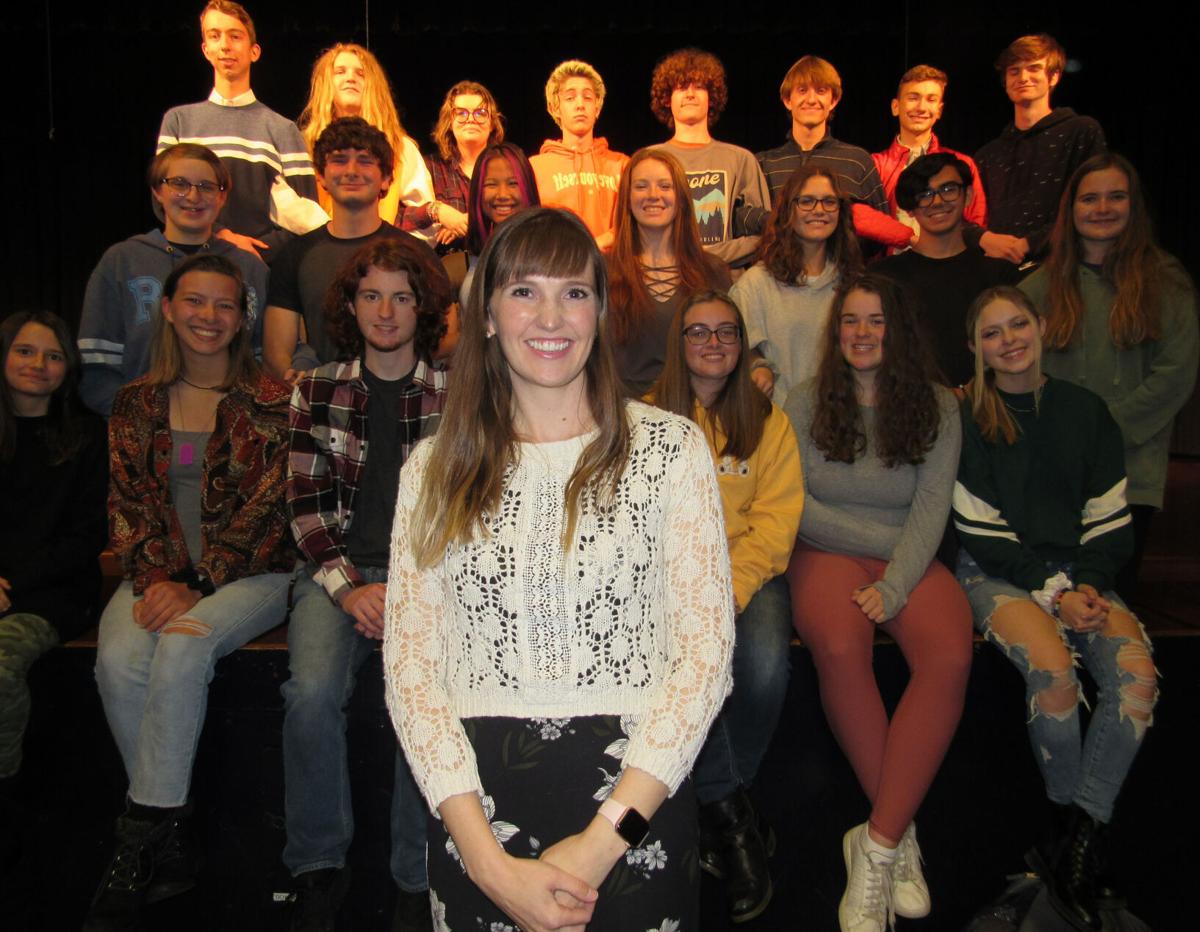 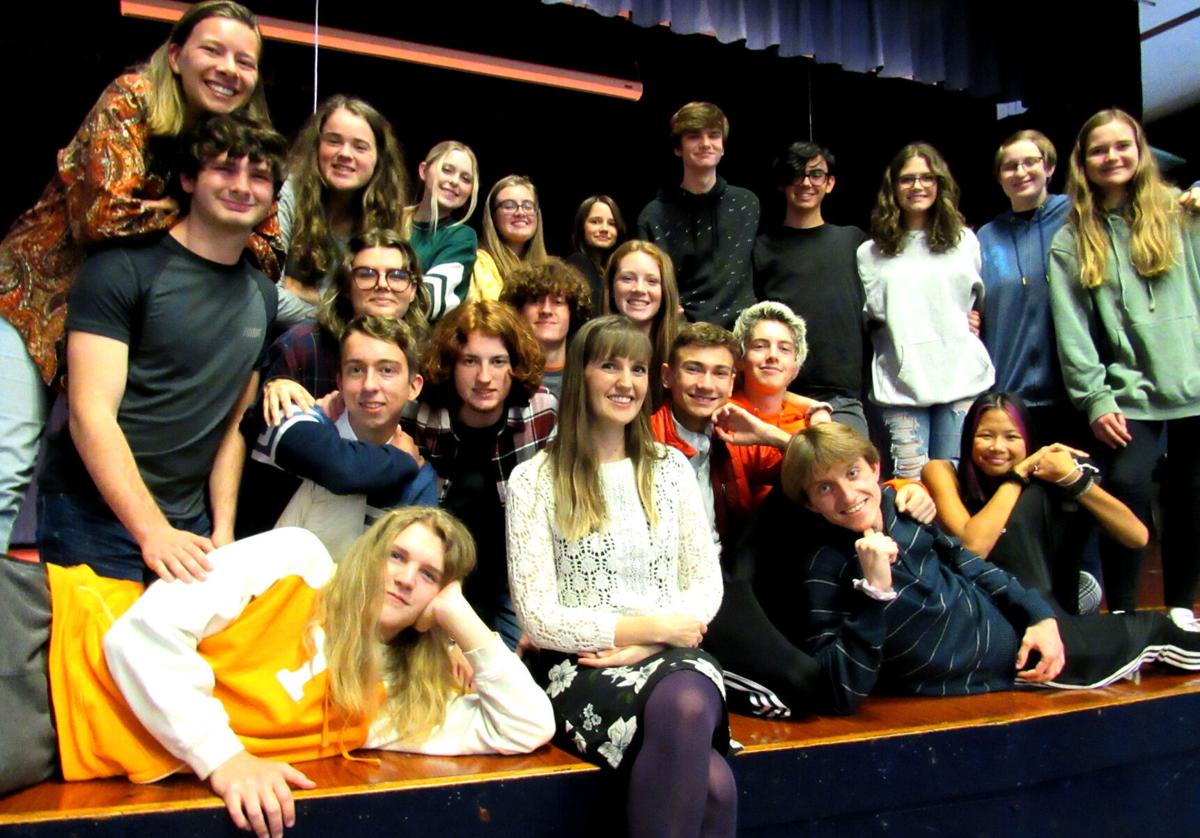 ABINGDON, Va. — For the first time in nearly 10 years, the curtain is rising on a group of theater students at Abingdon High School — and the teacher who is leading them to a statewide spotlight.

Under the direction of Mollie Ailey, a new English teacher at the school, 22 students received second place overall and the highest superior rating possible for their one-act performance in subregional competitions for the Virginia High School League (VHSL) Theatre One Act, a dramatic art competition held each year for high school students, who perform one-act plays with a maximum length of 35 minutes.

Christiansburg High was awarded first place in the student competition, which, along with Abingdon High School, advanced to the regional competitions Tuesday in Christiansburg.

Ryan Stinson, a senior, described the one-act competition as “incredible.”

“It’s something we as a high school haven’t had in many years. I was really excited to join this program,” he said.

Calliope Koesters, also a senior, was among four students at the competition to receive an award for outstanding actor.

“It’s been great. I love the chance to be onstage after so many years,” she said.

“Being in One Act has been an amazing experience,” he said. “As the stage manager, I help schedule and run rehearsals and make sure everything is running smoothly behind the scenes before and during the show. I have loved every second of it and have been so lucky to be able to work with this group of amazingly talented people.”

It’s an accomplishment for the Southwest Virginia school that may not have come to pass without the dedication of Ailey, who joined the staff in August after teaching for six years in Smyth County and two years in Bristol city schools.

Ailey, 35, is being praised for resurrecting the theater program at the school because of her energy and passion for the arts.

“Ms. Ailey is the key to reviving our one-act program at the competitive level, which will give our students an extra outlet to hone their skills and showcase their talents,” said Wendy Davis, assistant principal at the high school.

Until this year, students with an interest in theater performance channeled their talents to the school’s choral programs.

“It will be good for the students to see the competitive factor involved in theater production,” Davis said.

“When you look at the artistic opportunities we have in this area — Rhythm & Roots and Barter Theatre — it’s great that we’re coming back to the one-act plays to give students an outlet to showcase their work. It’s a great revival.”

Ailey brings her own unique style of energy and enthusiasm to the program, offering the students a new perspective while also providing meaningful connections with them.

“I love Ms. Ailey with all my heart. She shows so much respect to everyone she meets, and I aspire to be like her when I am older. We would not be able to have such an amazing show without her,” said Marilyn Yuhasz, a cast member.

The youthful teacher just seems to be a natural fit for the role of theater facilitator.

As a child, Ailey loved the arts. She enrolled in classes for painting, photography, silkscreen printing, sewing, pottery and basket weaving — just to name a few. Formal training in piano and voice helped the young performer sharpen her skills. She enjoyed summer camps at William King Museum of Art and Barter Theatre.

When she was 12, Ailey was cast in her first show at Theatre Bristol and continued to participate in theatrical productions. She did a number of shows with Theatre Bristol, the Palmer Mill Playhouse in Saltville and Barter Theatre’s “For Kids By Kids Productions.”

“I was never good at sports, but I wanted a team. I craved a community, and theater people are the very best kind of people. They were my chosen family,” she said.

She quickly learned that theater offered a way for her to communicate and solve problems.

“It’s no secret that being a teenager presents challenges, and some face more than others. The theater provides a safe space to work through intense, messy human emotions and find friendship and encouragement,” she said.

Ailey and the theater students discussed options for a play for the competition back in September. Because of the real-life issues portrayed in the story, the students chose “Badger” by Don Zolidis. The story centers around the lives of four women who take jobs at Badger Ordnance Works, a munitions factory in 1944, entering the workforce during some of the darkest days of World War II.

“The play underscores the blatant sexism the women face when entering the workforce but also celebrates the relationships they form during their time at the plant,” she said. “The students were drawn to the issues that still persist in our culture today.”

Ailey confessed that putting together the 35-minute one-act play in just one month was a challenge.

“It’s a lot to take on and requires a lot of time, but these students do not make it feel like work,” said the teacher, who often returned to the school in the evenings for rehearsals. In addition to acting on the stage, students also served as stage manager and assistant stage manager, ran lights and sound, created original music and designed period makeup and costume looks.

“The VHSL organization calls me a coach for the competition program, but I see myself as more of a facilitator to these amazing kids,” Ailey said. “They deserve all the praise. I’m inspired by them every time I’m around them. They are driven and talented beyond words.”

The student actors do not receive academic credit for their participation in the one-act competitions. The extracurricular activity is treated similarly to being in a sport, she said.

“It’s just something they’re doing out of their love for it, which makes this group even more impressive,” said Ailey. “The students have done an incredible job bringing the characters to life. I couldn’t have dreamed up a more perfect group for my first time taking on this project.”

She hopes to build on her experiences with the program next year.

“I am truly honored to have the opportunity to play a small part in what they have achieved. It’s a dream come true for me to be able to provide a creative outlet for a new generation of kids, and I look forward to seeing what the future holds for theater at Abingdon High School.”

Carolyn R. Wilson is a freelance writer in Glade Spring, Virginia. Contact her at citydesk@bristolnews.com.

Nearly 60 students from Holston High School spent the morning last Friday participating in a service day for the town of Damascus.