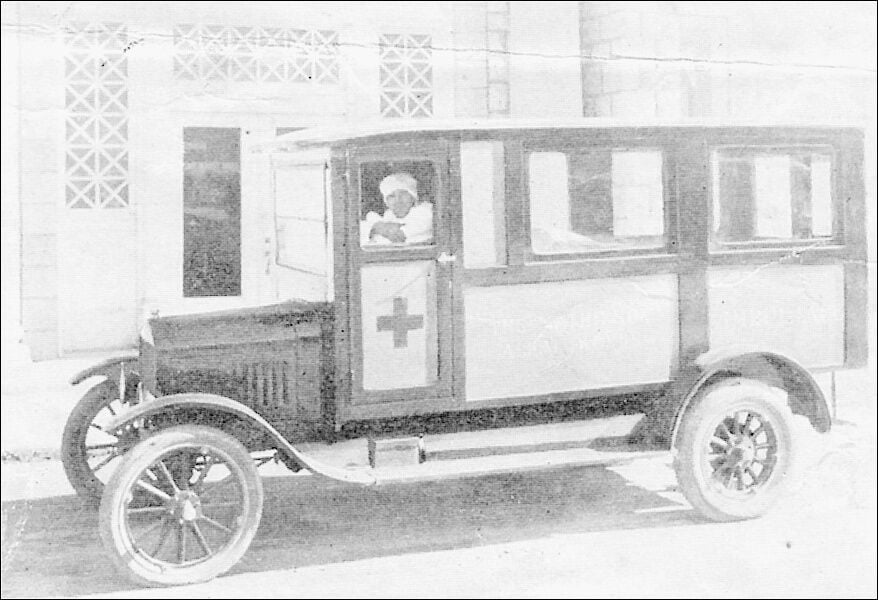 An ambulance in Saltville in 1910. 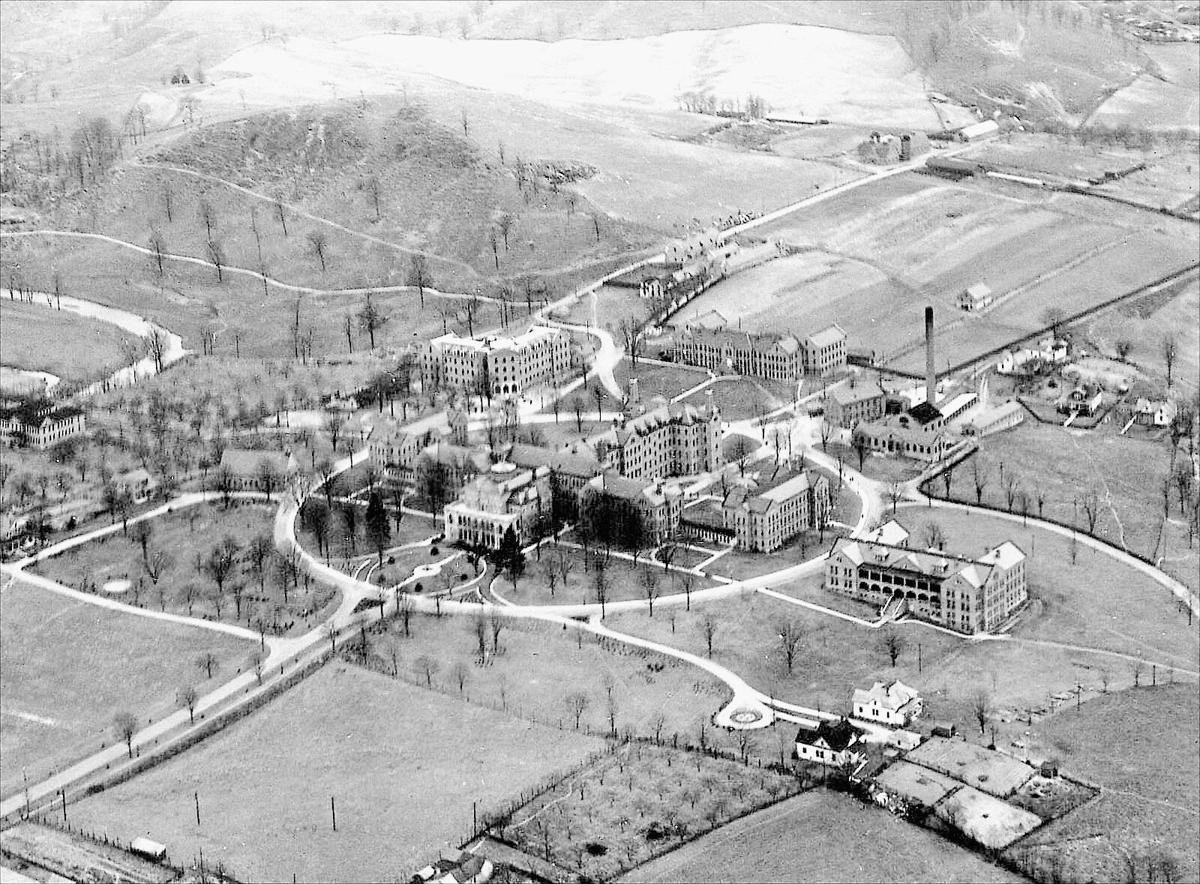 Since the onset of the COVID-19 pandemic, we have watched scenes of heroism play out on news reports, as medical professionals have been placed on the front lines in a war against a virus that takes no prisoners and fights with no mercy. I’m sure many of them never imagined they would be enlisted in such an effort. The images of doctors and nurses running from one critical patient to another are seared within our minds. Their eyes reflect exhaustion and frustration as they courageously remain committed to the compassionate care of the victims of this virus that has swept the globe. The emotional intensity of this war taking place in hospitals all over the world is almost beyond comprehension.

As I have watched the unfolding of the pandemic, my thoughts have turned to the early physicians who worked in Smyth County. Our family history is full of stories about Dr. Jim Thompson and Dr. Charles Thompson, who were lovingly referred to as “Dr. Jim” and “Dr. Charles.” They were called upon at all hours to make house calls in a time when medicine was practiced differently than it is today. Theirs was an era before copays and high deductibles.

I discovered, in some of my files, two articles written by historian Clara Hill Carner in 1965. She spent a considerable amount of time researching the history of medicine in Smyth County and shared her findings with readers. Of early physicians who sat by bedsides, practicing the art of healing, she said, “How indebted we are to those consecrated, friendly physicians who took their cue, spoke their lines, and then made their bow as the curtain of eternity rolled down on their act. While some were considered as ‘quacks,’ and charged with malpractice, others were held in high esteem.

“Smyth County has had its quota of those devoted individuals who blazed the medical trail on horseback or in buggy, night or day, hot or cold, mud or dust, to the homes of the prosperous, as well as those of the pauper.”

She goes on to offer what she admits is not a complete listing of each doctor who served in our county. The lack of records prohibited her from achieving such a feat.

“Dr. George S. Vertigan was a practitioner in Marion. He died in 1912 and is buried in the Elizabeth Cemetery in Saltville. Dr. S.W. Dickinson, known as the ‘dean of Marion medicine,’ came here from Louise County in 1881. He was held in high esteem. He was a leading member of the Baptist Church. His home stood on the corner of Church and Lee Streets.

“Dr. J.S. Apperson, who practiced at Chilhowie, became second assistant physician on the first staff at the Southwestern State Hospital in 1887. He resigned in 1888 and opened an office in Marion. His home stood on the corner of Cherry and Church Streets.

His family moved here from Orange County when he was a young boy. “He never attended school after his twelfth year. He worked for Mr. Shuler getting out cordwood. Later, he read medicine in the home of Dr. Elijah D. Faris, who lived near Chilhowie. He was a member of the ‘Smyth Blues’ in the War Between the States and served as surgeon in the Army. After the war, he attended medical college one year, and received his diploma.”

“Dr. E.T. Brady, who served as second assistant physician at the State Hospital, opened an office downtown after 1892. He later moved to Abingdon where, in 1905, he organized a stock company and erected a small hospital. It became the nucleus of the George Ben Johnston Memorial Hospital.”

“In 1927, Dr. George A. Wright of Giles County was superintendent of the State Hospital. In 1940, he with others, founded the Lee Memorial Hospital and operated it for several years. Dr. Wright practiced at Chilhowie and Rich Valley, living at Broadford.

“Dr. D.C. Boatwright, who in 1928 was assistant physician in the Davis Clinic at the State Hospital, later opened an office in Marion in 1932.

Following the publication of Clara Hill Carner’s article, she received a letter from the granddaughter of Ezra Nuckels Sheffey—another one of Smyth County’s early physicians. In the correspondence, Thelma Riddle Bear, offered a brief biography of Dr. Sheffey and included some of her own recollections.

“Ezra Nuckels Sheffey, son of Henry L. Sheffey and Celia Nuckels Jackson Sheffey, was born in the little community of Ivanhoe, Wythe County, Virginia, on July 13, 1824. Dr. Sheffey’s first wife was Margaret Rhea Sheffey. She died on June 12, 1854. He then married Elizabeth Virginia Preston on Sept. 5, 1855, at Walnut Grove, Virginia. They lived in Marion, where he had a drug store and was a practicing physician and dentist. Elizabeth was a small woman, never weighing over 98 pounds. Dr. Sheffey could hold his arm straight out and she could stand under it without her head touching his arm.

“Dr. Sheffey left Marion when his wife, Elizabeth, was given a 360-acre farm by her father, Dr. Robert Fairman Preston. This farm was across the Stage Coach Road from her father’s farm, Walnut Grove. Dr. Sheffey died there on Feb. 13, 1891.”

These are just a few of the physicians who served our community prior to 1965. If you have a story, photo, or biography of a medical professional who has served in Smyth County during the past 60 years, please contact me at mwlinford@yahoo.com.

Margaret Linford is a professional genealogist and is president of the Smyth County Genealogical Society.

LETTER: If Donald Trump is reelected, we will all weep for our country

I recently saw a bumper sticker that read “Vote for Trump! Make Liberals Cry Again.” Over the years, the terms “liberal” and “conservative” seem to have lost their meanings.

I would like to thank the Bristol Herald Courier and the Washington County News for revealing and publishing the spending habits of Abingdon’s seem-to-be runaway Town Council.

OPINION: Volunteers step up to help in response to the pandemic

While many of us hunkered down at home, as we were asked to do when the pandemic struck in March, there were some who took the opportunity to step out to help.

I wish Gov. Ralph Northam and other liberal leaders in our country were interested in unborn babies having a chance to even have a childhood.

OPINION: The most consequential vote on the ballot

The biggest question on the ballot will be the constitutional amendment on whether to set up a bipartisan commission to draw district lines that will govern the state for the whole decade — and beyond.

A recent apparent spike in the number of serious truck accidents along Interstate 81 in Southwest Virginia has area first responders concerned, but relief might be just a few construction projects away.

An ambulance in Saltville in 1910.