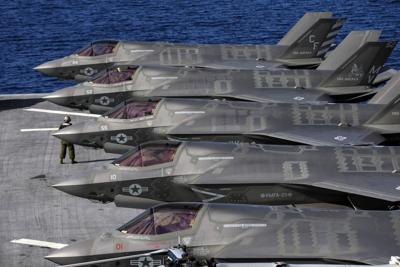 The “defund” trope has become so politicized that it now gets in the way of, rather than advancing, policy advocacy of any stripe.

But that doesn’t mean we should reflexively dismiss the underlying idea that government funds should be shifted away from wasteful or counterproductive purposes and redirected to beneficial ones.

Case in point: The United States spends far too much on the Pentagon. The country would be more secure, safer and healthier if we shifted some of the more than $700 billion in Pentagon spending to priority domestic and human needs.

Let’s start with the first half of the equation: The Pentagon budget is far too big.

The United States spends far more on its military than other nations. U.S. military spending is more than the next nine countries combined. It is 12 times the amount Russia spends.

Yet demands persist from the military-industrial complex to spend ever more. For the coming fiscal year, the Biden administration requested an increase in Pentagon spending to more than $800 billion.

Congress is poised to add even more to that total — with some saying the U.S. should spend $1 trillion on the military budget.

The lobby to spend more, more and more on the Pentagon is disconnected from any legitimate national security needs.

Not only does the United States vastly outspend other nations, but it also doesn’t effectively manage what it does spend. The Pentagon is unable to pass an audit, and Pentagon spending is replete with waste and fraud. The Pentagon identifies more than $100 billion in administrative waste in its budget.

The Pentagon throws unfathomable sums at needless or ineffective weapons. According to the Project on Government Oversight, the defective and dysfunctional F-35 program will cost more than $1.7 trillion over its projected 50-year lifespan.

The Pentagon squanders tens of billions on overpriced contractors to perform jobs that should be done by government employees. One spare parts maker reports a 3,800% profit level.

Indeed, you can better understand the size of the Pentagon budget not through the lens of national security but as a reflection of the lobbying prowess of military-industrial contractors, who collect more than half of all Pentagon spending.

Now to the second half of the equation: We have a long list of urgent needs in this country that we don’t address for lack of funding.

Take one specific example: Congress increased Pentagon spending last year by $28 billion over the Biden administration’s request. That same amount could instead have been spent to scale up global vaccine production and end or at least diminish dramatically the pandemic.

Did the extra $28 billion for the Pentagon do anything to make us safer?

By contrast, our national security would have been massively improved if we had helped vaccinate the world — an investment that may have prevented the omicron variant from developing.

To take another example, there is no greater threat to national security right now than the fast-worsening climate crisis. In the historic Inflation Reduction Act, Congress agreed to spend $40 billion a year to reduce carbon emissions. That’s less than one-twentieth of the annual Pentagon budget.

Moreover, the Inflation Reduction Act spending is wholly paid for with new tax revenues. By contrast, Congress routinely throws billions more at the Pentagon without worrying about how the costs will be covered.

Why does it make more sense to tolerate waste, fraud and military contractor profiteering at the Pentagon when so many pressing needs go unattended?

Let’s skip the tired arguments about “defunding” and instead focus on what really matters: It’s time to end wasting money on the bloated Pentagon budget.

We will make our nation stronger and better by shifting some of the Pentagon’s excessive funding to other needs.

Weissman is president of Public Citizen in Washington: citizen.org. He wrote this for InsideSources.com.

What's our moral responsibility to migrants? | The Ethical Life podcast

🎧 The hosts debate the causes of the crisis at the border and what can be done to help fix this long-term problem.

Something noticeably different this year at Nolan Catholic High School in Fort Worth, Texas.

Ranked choice voting has been in vogue across the nation, with many cities and some states changing their elections to incorporate it.

Walter Olson: Ranked choice voting is a good idea that deserves a tryout

Lynn Schmidt: A cheer to those who answer the call to something bigger

At a time when it seems like our society is spiraling with out-of-control selfishness, consumed with immediate gratification, self-centeredness, illiberalism and grievance, it can be helpful to remind ourselves that plenty of folks still practice altruism.

An international relations expert joins the Utterly Moderate Podcast to assess the current state of the war in Ukraine.