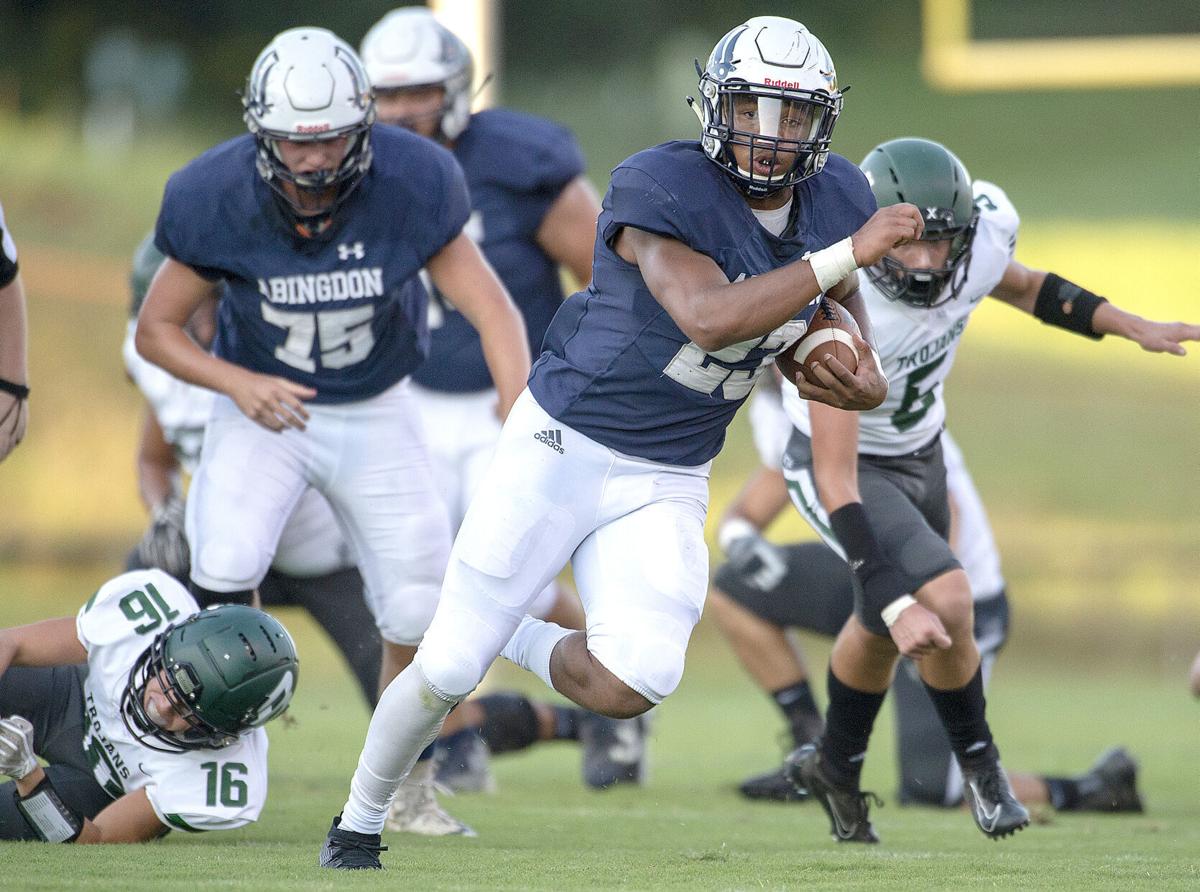 Abingdon’s Martin Lucas runs away from the John Battle defense during a 2019 contest with the Trojans. The talented Falcons running back has committed to play football next at William & Mary. 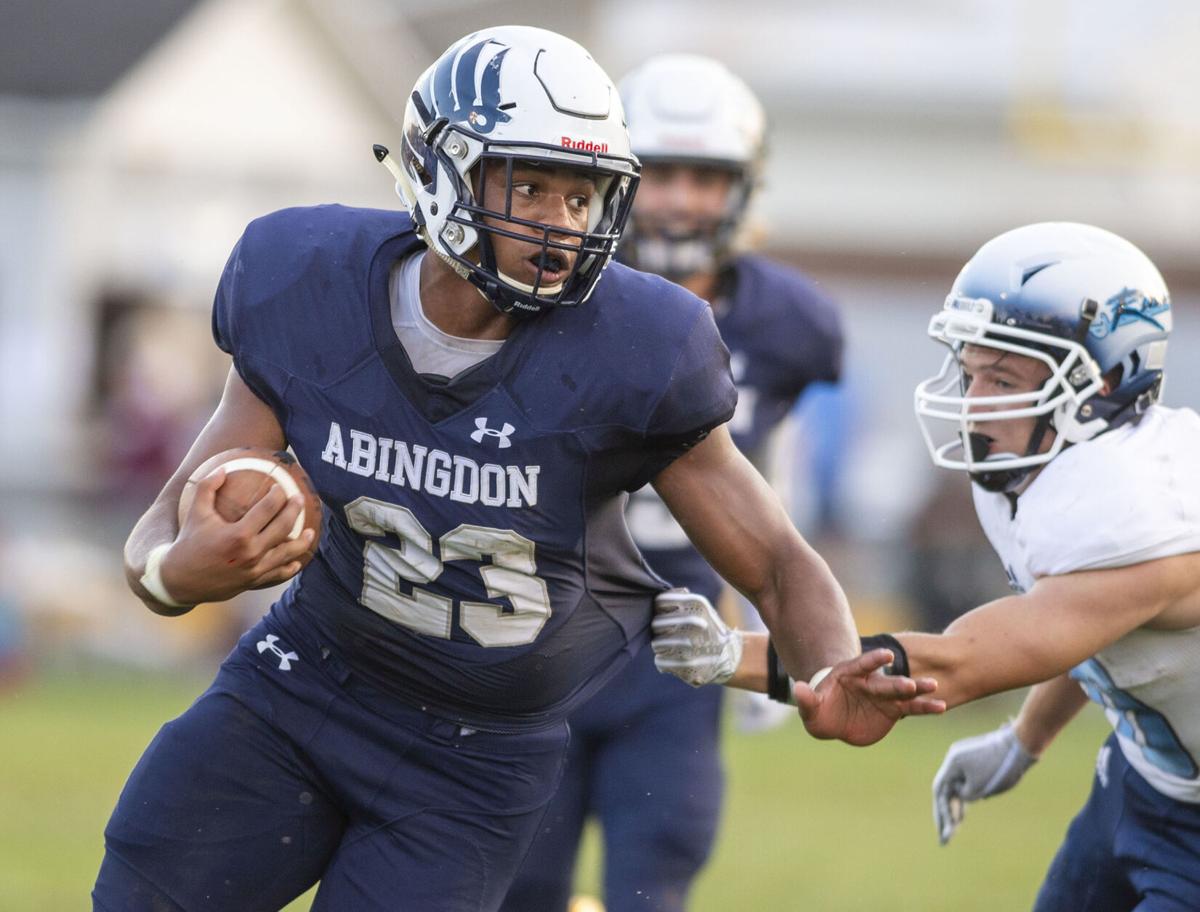 He wanted a loyal approach and the opportunity to play running back.

‘William & Mary was actually the first school that offered me a scholarship,” Lucas said. “That means a lot because it helped the other offers came in.”

The 6-foot-3, 240-pound Lucas received a total of 20 major college offers before making a verbal commitment to attend Arizona State on July 17.

Then, on Nov. 20, Lucas opted to explore other options.

“As soon as I reopened the process, a lot of schools reached out to me,” said Lucas, rated as a three-star recruit by Rivals and 247Sports.

Once again, William & Mary was at the front of the line.

“They were upfront about everything,” Lucas said. “They told me what position they wanted me to play and what my playing time would look like. I appreciated that.

“And I know that after football, a degree from William & Mary will play a big role in getting a job.”

Arizona State head coach Herm Edwards had pegged Lucas as either a linebacker or running back.

“Other schools like Virginia Tech wanted to look at me as a linebacker or defensive end,” Lucas said. “I’d rather be a running back than play defense. I love running the ball, and the coaches at William & Mary said they like my size and speed.”

Lucas said there were other reasons why he decided to switch his college destination, including the 1,900-mile distance from Abingdon to the sunbaked ASU campus in Tempe.

“The coaches at Arizona State told me in November that I couldn’t sign in December because they wanted to see me play after my foot injury last season. I didn’t feel comfortable with that,” Lucas said.

Lucas was limited to six games as a junior because of a torn ligament in his foot. He still rushed for 887 yards and 14 touchdowns, nearly breaking the single-season and career rushing records at Abingdon.

As a freshman, Lucas was sidelined by a broken thumb.

“Those two injuries give me extra motivation for my senior season,” Lucas said. “I’m ready to get back on the field and help my team.”

After the Virginia High School League postponed the 2020 fall football season until the winter and spring due to COVID-19, Lucas fed his need for football by attending every home game at Tennessee High.

“It was really frustrating seeing the area teams in Tennessee play,” Lucas said. “I missed the game so much.”

Since schools in Washington County have gone to a virtual learning method until at least Jan. 15, Lucas is unable to meet with his coaches or use the school weight room.

“I’ve been out working like crazy at a local fitness center,” Lucas said. “We’re all looking forward to having Zoom meetings with our coaches at Abingdon soon and going over the playbook.”

But Lucas admits to being concerned about the rise in COVID-19 cases around Washington County and the rest of Virginia.

“It does worry me the way things are looking,” Lucas said. “And it’s kind of scary that the start of basketball season has been pushed back because our football season is scheduled to start in February. I’m praying that we get to play.”

Due to travel restrictions and other health measures, Lucas and other college recruits have been forced to make many adjustments.

Zoom conferences and virtual campus tours have become the norm.

The chemistry with London came natural, according to Lucas. London coached the University of Richmond to the 2008 FCS national title and earned Atlantic Coast Conference Coach of the Year honors at the University of Virginia in 2011.

“I love Coach London,” Lucas said. “He’s a really good coach, a motivator and a mentor. The positive conversations I had with Coach London and his staff are a big reason I chose William & Mary.”

“Oh, yeah, it’s good to not have to worry about where I’m going to be for the next four years. I have a home now, and it’s closer to my hometown.”

BRISTOL, Tenn. — According to track officials, the transformation of Bristol Motor Speedway into the world’s largest dirt facility is ahead of schedule.

BRISTOL, Va. — As the lone returning starter for Abingdon High School’s girls basketball team, Morgan Blevins has gone from being a key part of a Fab Five to the headliner of a Fresh Five.

Tampa Bay quarterback Tom Brady is going to his 10th Super Bowl after the Bucs got past the Green Bay Packers in the NFC championship game.

Super Bowl is set: It's Kansas City vs. Tampa Bay

The Super Bowl matchup is set. The Kansas City Chiefs beat Buffalo in the AFC championship game to advance to face Tampa Bay in the NFL championship.

The Detroit Lions are adding one of the best talent evaluators in the NFL, someone who had a hand in building the rosters for two of this year's playoff teams, to their front office. Former Kansas City Chiefs and Cleveland Browns general manager John Dorsey has agreed to join the Lions as a senior personnel executive, a person with knowledge of the deal but not yet authorized to speak about it ...

EMORY, Va. — If the early returns are any indication, it will be highly entertaining to witness the race for first place unfold in the Hogoheegee District over the next 3½ weeks.

The NFL announced that 7,500 health care workers vaccinated for the coronavirus will be given free tickets to next month's Super Bowl in Tampa.

Abingdon’s Martin Lucas runs away from the John Battle defense during a 2019 contest with the Trojans. The talented Falcons running back has committed to play football next at William & Mary.