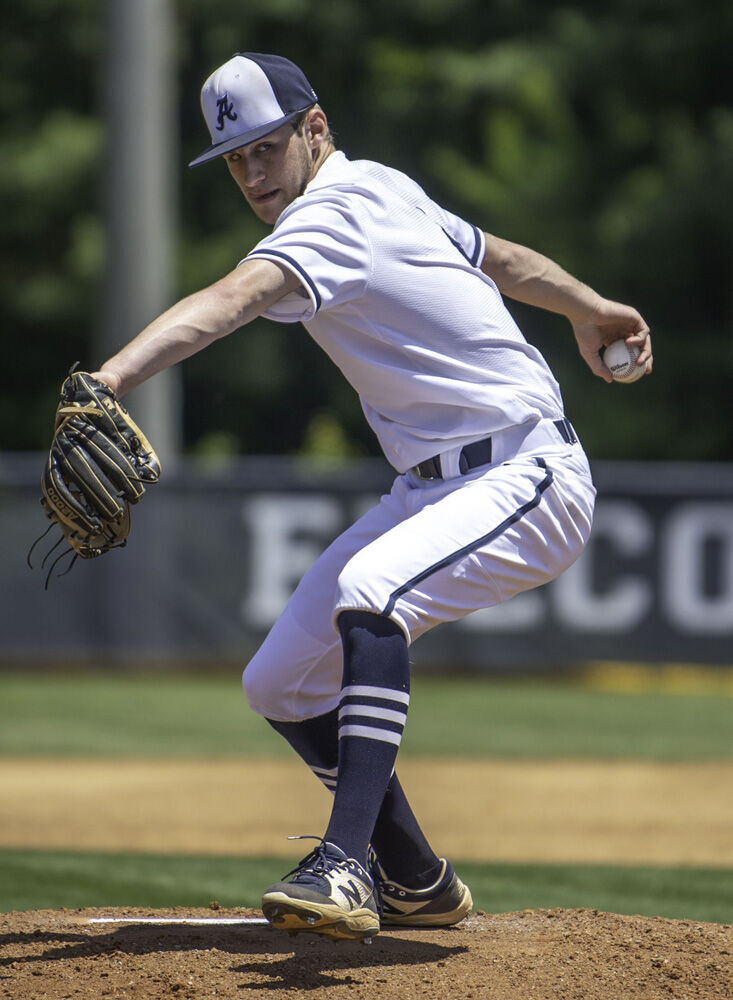 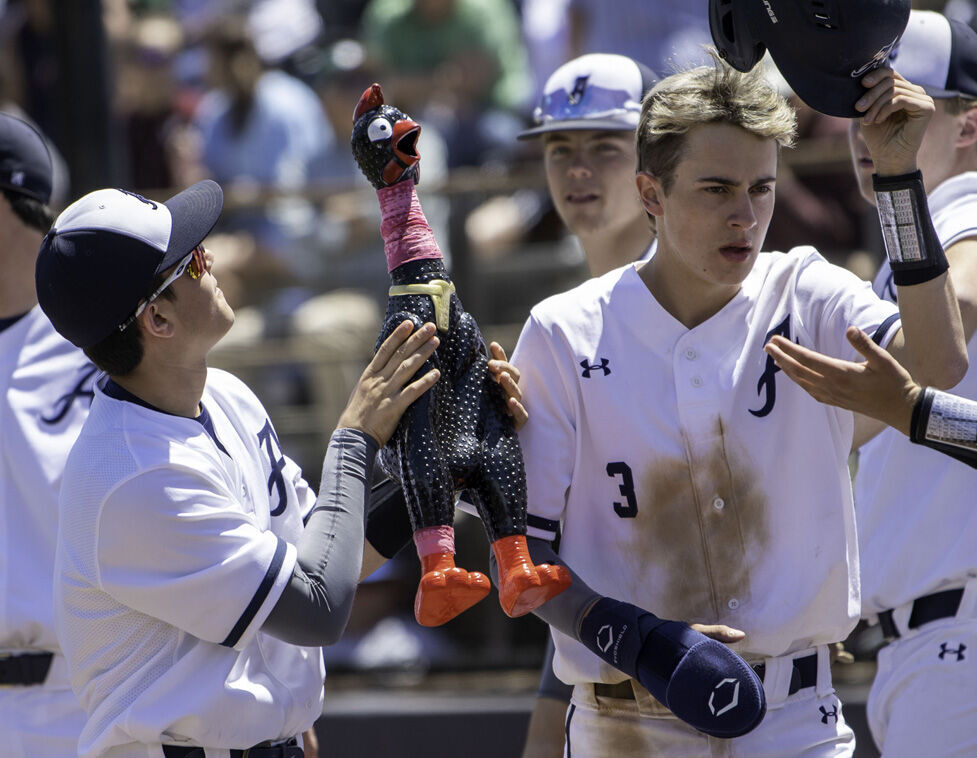 The Good Luck Chicken was working its magic on Saturday against Battle. Jake Thacker (3) had a pair of hits for the Falcons.

ABINGDON, Va. — With a defense that fields flawlessly and a lineup that has produced double-digit run totals in every game this season, Chase Hungate is self-assured when it is his turn to pitch for the Abingdon High School Falcons.

“I feel confident going out there on the mound,” he said.

That he is one of the top hurlers in Southwest Virginia doesn’t hurt either.

The right-hander who has signed with Virginia Commonwealth University has not allowed a run in 11 innings of work this season, and his strikeout total stands at 17. He retired the first 10 batters he faced on Saturday and also produced two hits with his bat.

“Chase just goes after hitters,” said Abingdon coach Mark Francisco. “He’s able to locate spots really well and kept them off balance. He throws three different pitches for strikes, and that solid defense behind him also makes it easier for him to pitch.”

The only threat Battle (1-1) mustered against Hungate came in the fourth inning when Abingdon’s ace issued walks to Zach Smith and JonAlan Richardson. That was a surprise, as this is the same guy who walked just six batters in 68 1/3 total innings pitched during the 2019 season.

“I was frustrated with myself,” Hungate said. “It’s just best not to walk people and give up free bases.”

Battle’s Will Purifoy followed with a sharp grounder up the middle that shortstop Ethan Gibson made a diving stop on and then flipped to second baseman Luke Francisco for the final out of the inning.

Abingdon (6-0) scored six runs in the bottom of the fourth inning to end any suspense.

Battle’s lone hit came with two outs in the fifth inning as Jacob Hutton’s grounder took a hop near first base and squirted through. Battle had just two balls leave the infield.

“Hungate was pitching pretty well,” said John Battle coach Jimmy Gobble. “He works really quick, and he can field his position too.”

It was Battle’s first game since an 8-7, eight-inning win over Gate City on April 30, as a positive coronavirus (COVID-19) test within the program had led to a two-week quarantine.

At times, the Trojans looked like a team that hadn’t played in two weeks as they committed three errors.

“We’re not going to make any excuses,” Gobble said. “Abingdon has a good ball team. There are many things that should’ve been done better defensively that we’ve got to consistently work on to shore up. Honestly, I felt like our pitching did fairly well, staying ahead and minimizing walks, and we had some quality at-bats. We got to see a lot, and we needed this.”

Ten games still remain for the Trojans, including pivotal matchups with Gate City and Wise County Central next week.

“We need to get comfortable defensively,” Gobble said. “I like our lineup, I like our youth. I think in due time we’ll be just fine.”

Caleb Collins, Jake Thacker, Jake O’Quinn and Ethan Gibson each had two hits for AHS, which has outscored the opposition 94-5 in 2021.

Saturday’s triumph followed a familiar formula: The Falcons did not commit an error, they pounded out a dozen hits, and Hungate was, well, Hungate.

“We stay hungry,” Hungate said. “We’ve all been playing together for a while, and we hold each other to a higher standard.”

Detroit Lions embrace being underdogs in 2021

What will it take for the Giants to take down the Dodgers?

What will it take for the Giants to take down the Dodgers?

What impacted the line move on the Dodgers?

What impacted the line move on the Dodgers?

Simone Biles says she withdrew from final to protect team, self; plus more from Tokyo

Simone Biles says she withdrew from the Olympics gymnastics team final because she wasn't in the right headspace to compete. Here's the latest.

The Abingdon 11- to 12-year-old All-Stars traveled to Vienna to play in the Virginia State Majors tournament.

Get the latest updates and complete coverage from Day 7 of the Tokyo Olympics ... plus an updated medal count, TV schedule and photo highlights.

Nearly out of event, US earns bronze in 4x400 mixed relay

TOKYO (AP) — The American lineup for the 4x400 mixed relay was rather unexpected — no Allyson Felix.

With Simone Biles out, Russians win gymnastics gold over US

The Russian Olympic Committee has won the gold medal in women’s gymnastics after U.S. star Simone Biles exited with a medical issue.

Biles was the defending Olympic champion in the vault. Plus, get the latest on the games tonight.

Simone Biles finds peace of mind at Olympics: An analysis, plus more from Tokyo

Maybe gymnast Simone Biles' decision to opt out of the Olympic team and all-around events isn't so stunning after all. Here's an AP analysis, plus more from Tokyo.

EXPLAINER: How the Russians caught the U.S. in gymnastics

TOKYO (AP) — Tom Forster's words were jarring. Not because they were controversial or insincere, but because they simply hadn't been uttered b…

The win helped the U.S. star make up for what has so far been the worst showing of her Olympic career. Get the latest on the Tokyo Olympics here.

The Good Luck Chicken was working its magic on Saturday against Battle. Jake Thacker (3) had a pair of hits for the Falcons.