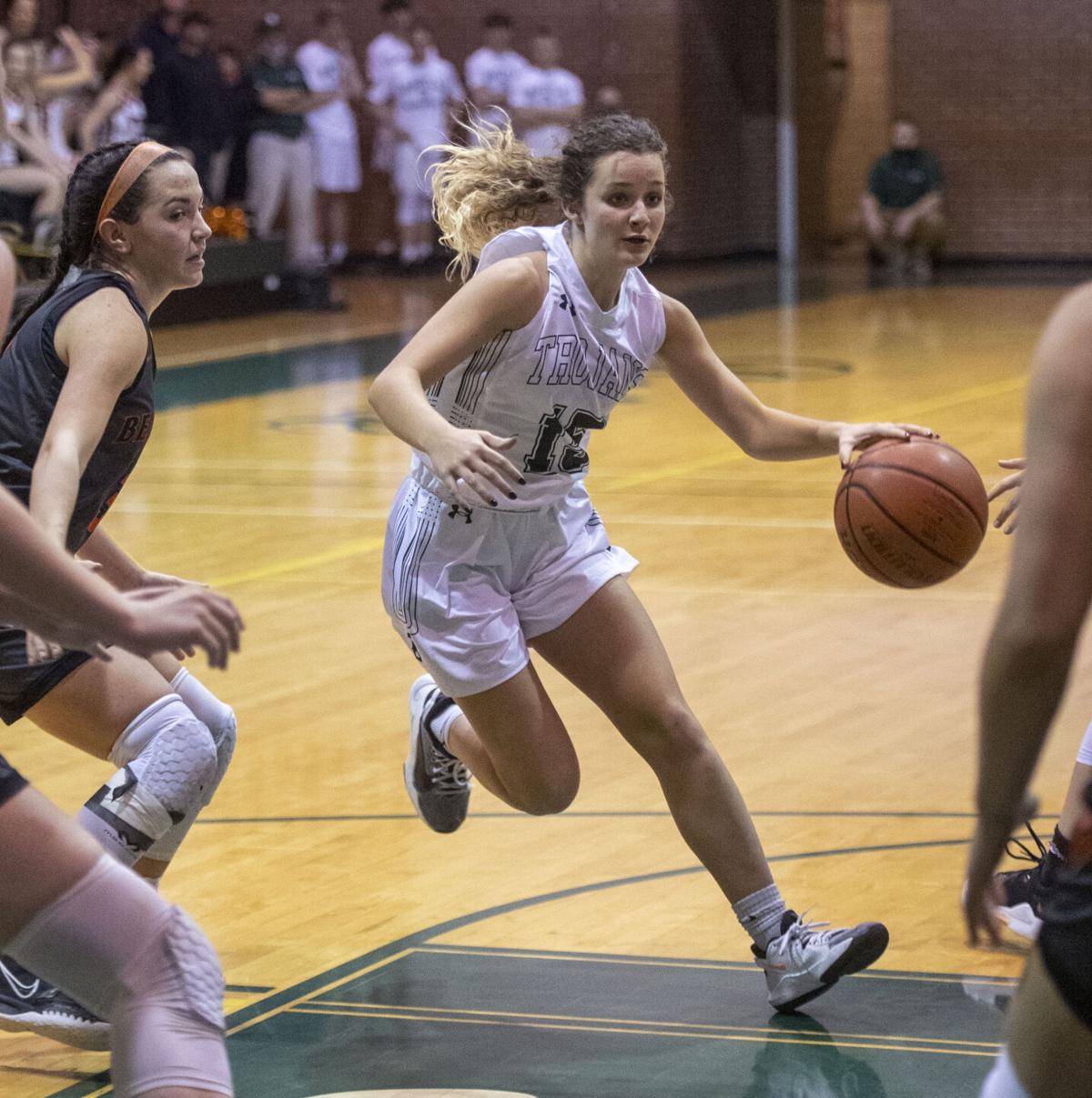 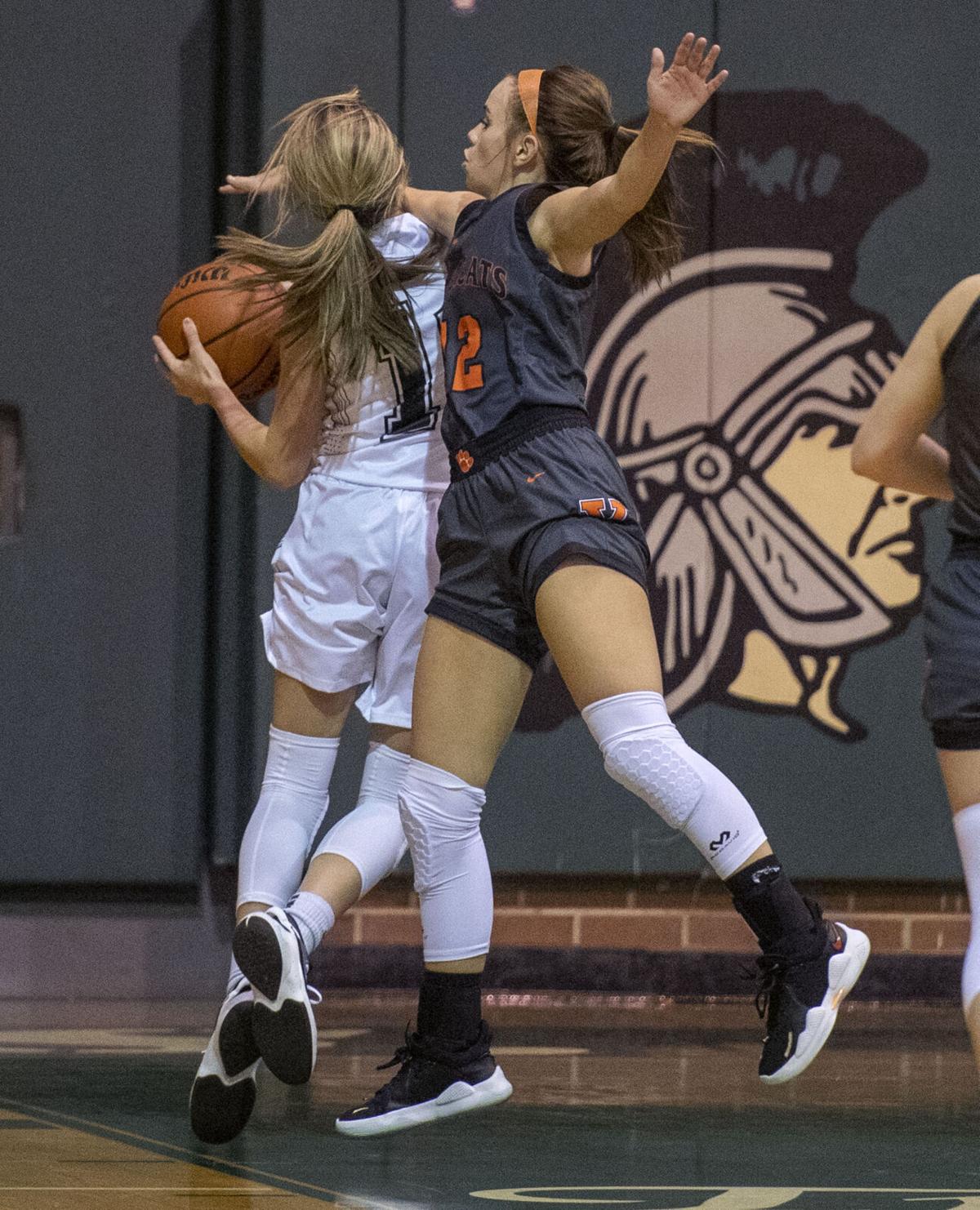 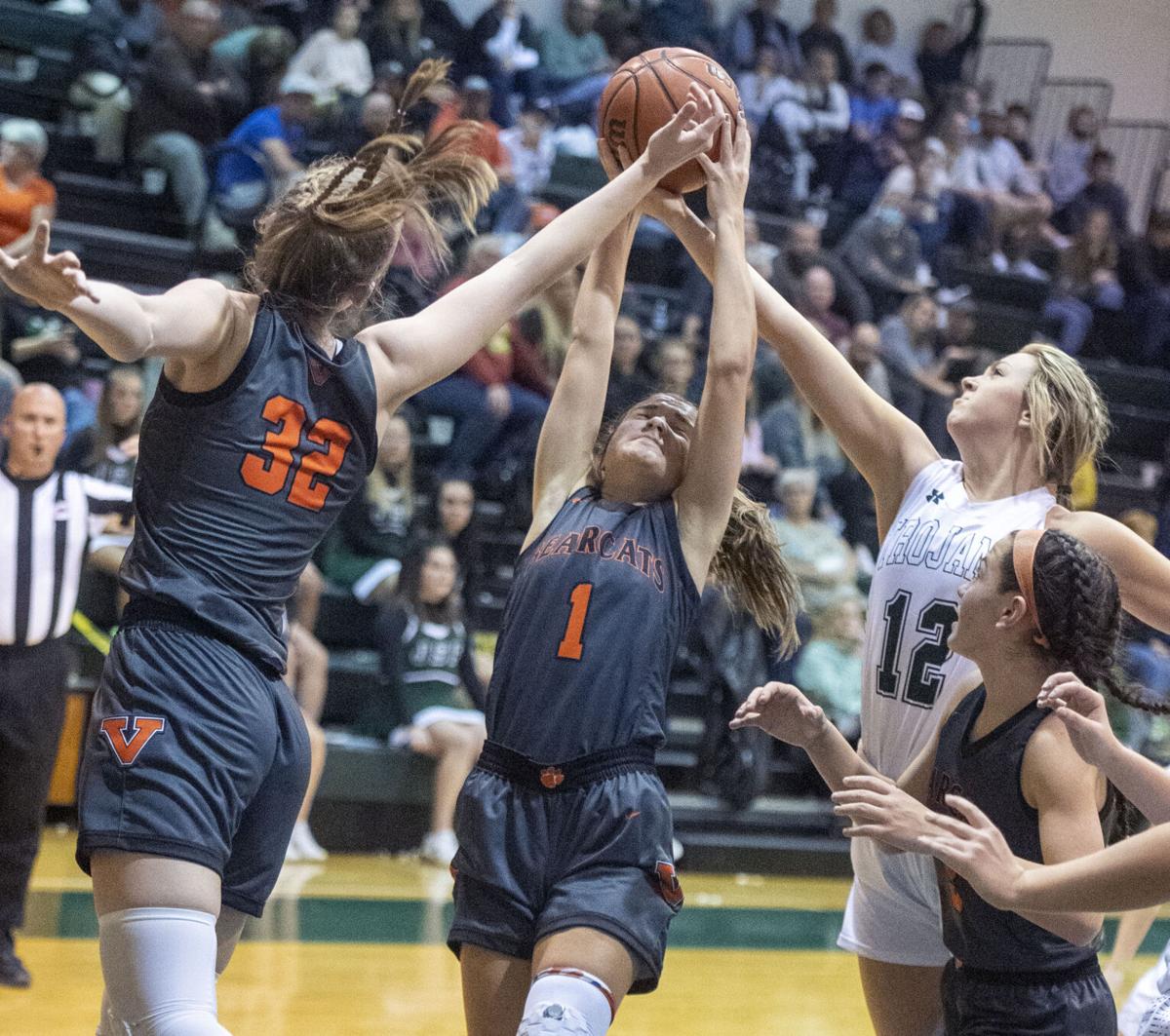 Virginia High's Dianna Spence and Mary Katherine Wilson try to come up with a rebound against Battle's Emma Bishop. 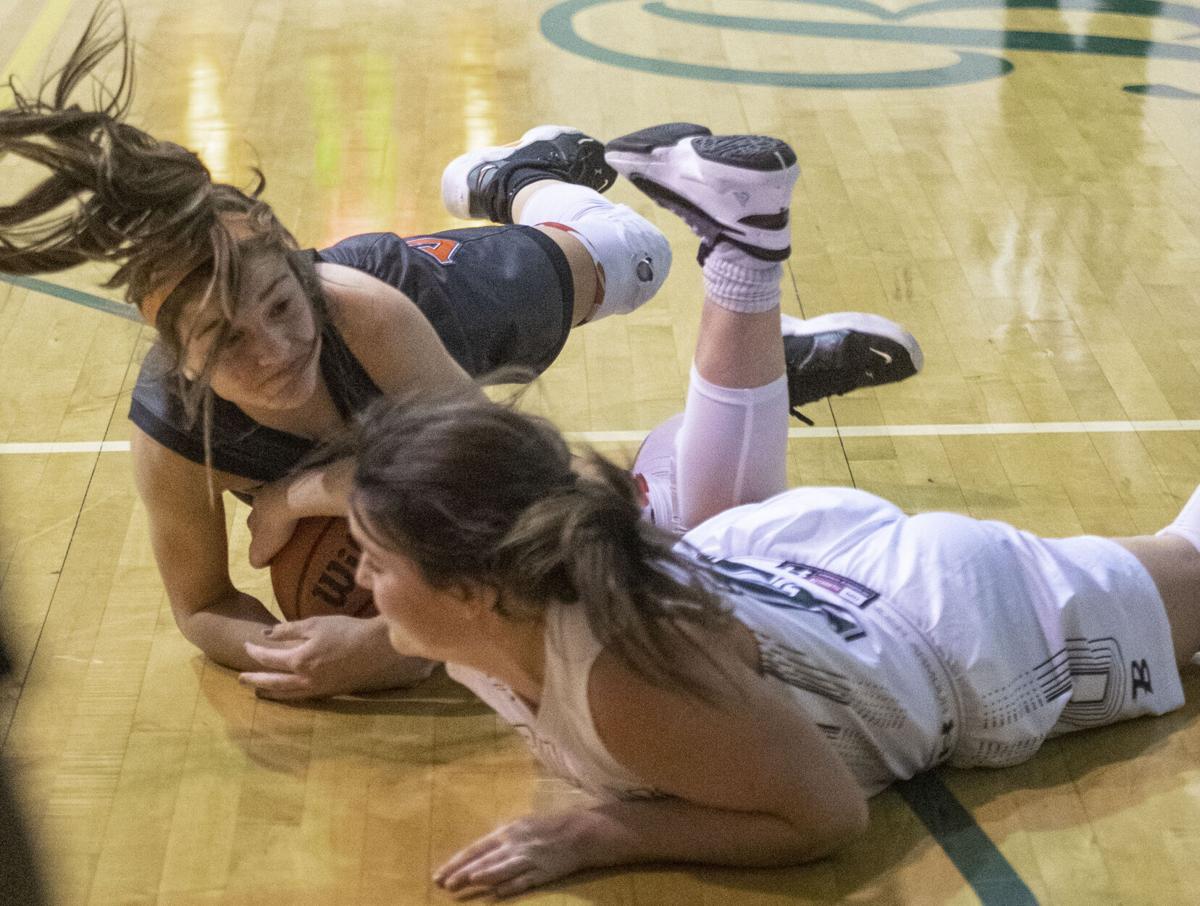 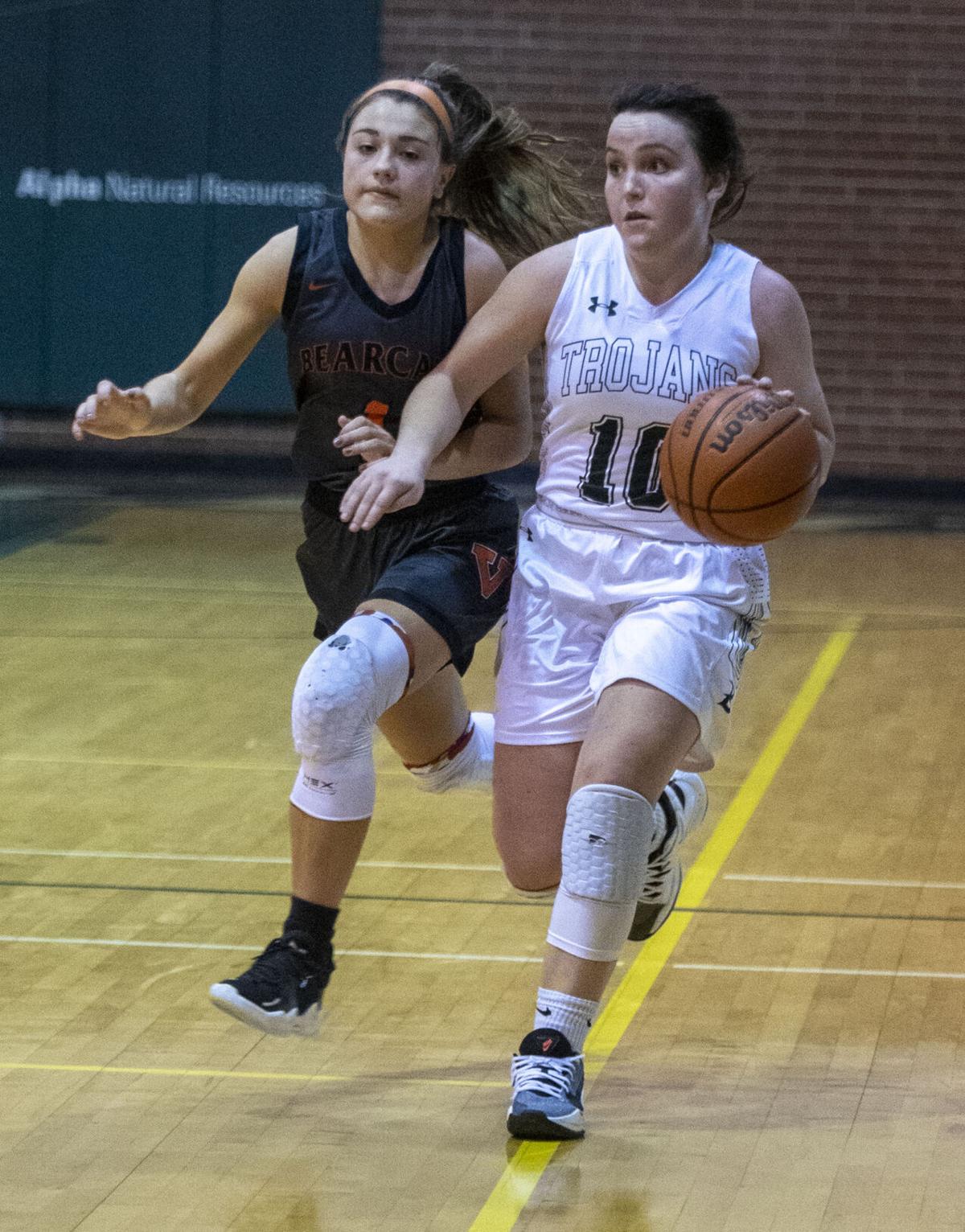 The JV girls played two overtimes, and the JV boys played an overtime session as well. And the girls varsity squads were tied 21-21 at halftime and 41-41 through three periods, but Battle owned the fourth quarter to win going away.

The Trojans, who led 11-10 after the first period, outscored VHS 18-3 in the final frame to turn a competitive game into a 59-44 runaway victory.

Virginia High committed a whopping 13 turnovers in the fourth quarter, many of which were forced by John Battle’s full-court, diamond-and-one press.

“I’ve told everybody by mid-January this is going to be a fun team to watch,” said 41-year coaching veteran Jeff Adkins, who has spent the last seven seasons at Battle. “Because they’re catching on to what we want them to do.

“I mean, we beat a good basketball team — good gracious, Virginia High’s good. But I’ll tell you, our kids believe in what we’re doing right now, and this is the most talented bunch I’ve had since I’ve been here. They don’t always make the right decisions, but they love to play this game.”

“I guess you can give Battle some credit, but really, we didn’t execute all night,” Timmons said. “It was a terrible fourth quarter and a terrible four quarters.”

The Trojans received excellent play from guards Anna McKee and Kara Kelley, both of whom scored 16 points.

Kelley scored five points on back-to-back hoops to open the fourth period and the Trojans pulled away from there.

“We did that in the fourth quarter, and we had three kids with four fouls,” Adkins said. “I’ll tell ya, I’m awfully proud of the way they finished tonight.”

VHS, on the other hand, limped to the finish line, not only committing a baker’s dozen turnovers, but not scoring from the floor until the final three seconds.

Maria Wilson netted 17 points to pace the Bearcats, who received a 15-point outing from Dianna Spence.

The boys game, which followed three junior varsity overtime sessions prior to a girls varsity contest that featured more than 50 fouls, ended at 11:10 p.m.

The Bearcats (3-0) led from the get-go in the boys game, running out to a 17-8 edge after one period and maintaining control thereafter.

Dante Worley tallied 20 points to lead the winners, who put 10 players in the scoring column.

The Trojans (2-2) were paced by the 13-point outing of Nathan Spurling. Noah Ratliff also reached double figures for Battle, tossing in 10 points.

Virginia High athletic director Brad Harper and VHS girls basketball coach Kevin Timmons have been on a two-year search mission. The payoff will come Jan. 20-22 with the latest edition of the FriendshipCars.com FCA Prep Showcase at the Bearcat Den.

Dorman High School coach Thomas Ryan knew almost immediately on Monday that it was going to be a good day for Noah Clowney.

Durant, Nets set for matchup against the Wizards

SAN ANTONIO (AP) — Devin Booker had a season-high 48 points and the Phoenix Suns dominated the fourth quarter to defeat the San Antonio Spurs 121-107 Monday night for their fourth straight victory.

Tatum and the Celtics host the Hornets

Officially, NBA players began participating in games that were scheduled to celebrate and honor the life of Dr. Martin Luther King Jr. in 1986 when the federal holiday commemorating the civil-rights leader was observed for the first time.

Young and the Hawks face the Heat

Virginia High's Dianna Spence and Mary Katherine Wilson try to come up with a rebound against Battle's Emma Bishop.