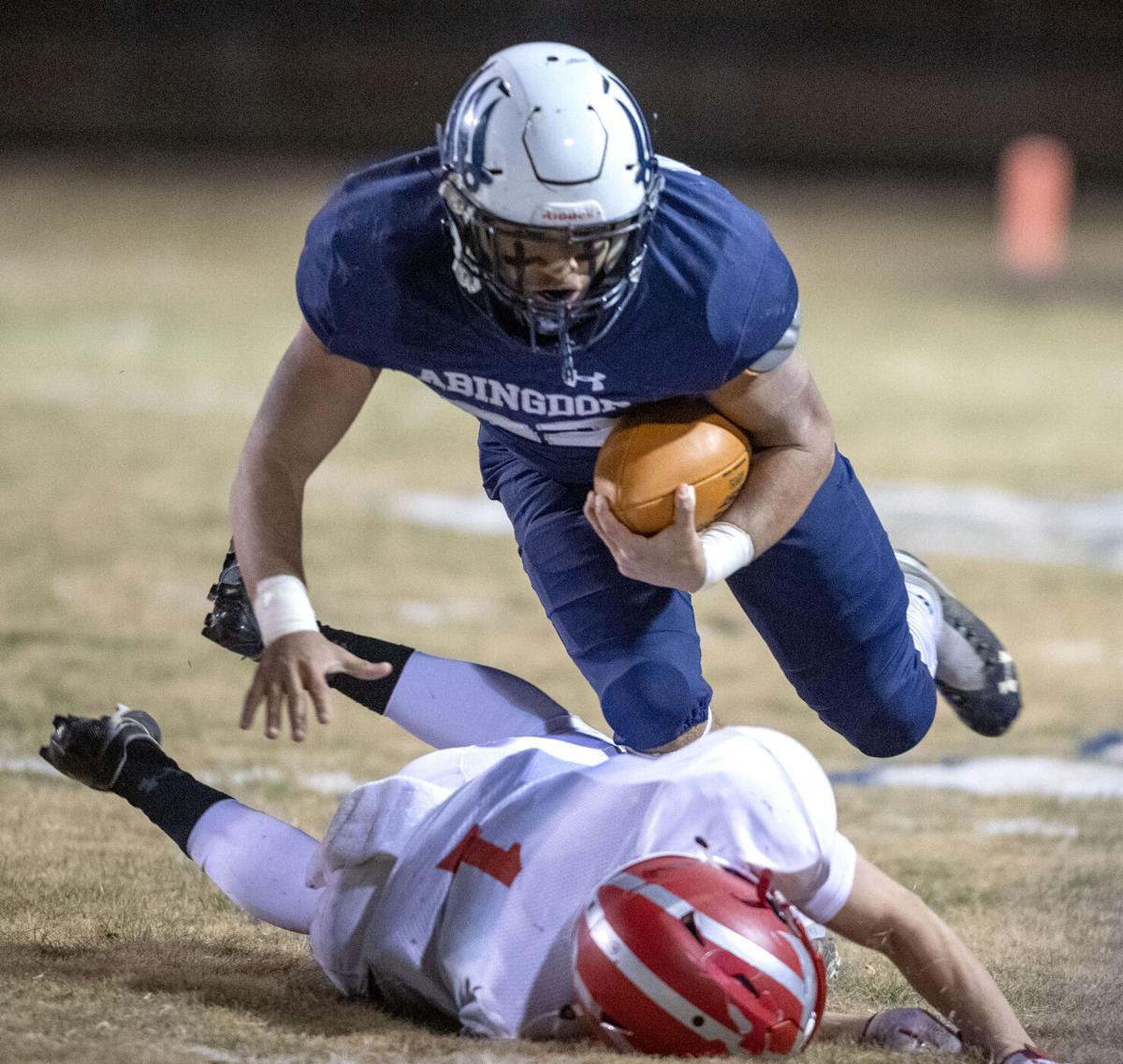 Abingdon RB Malique Hounshell gets a couple of extra yards after the initial contact by Lord Botetourt's Sammy Peery. 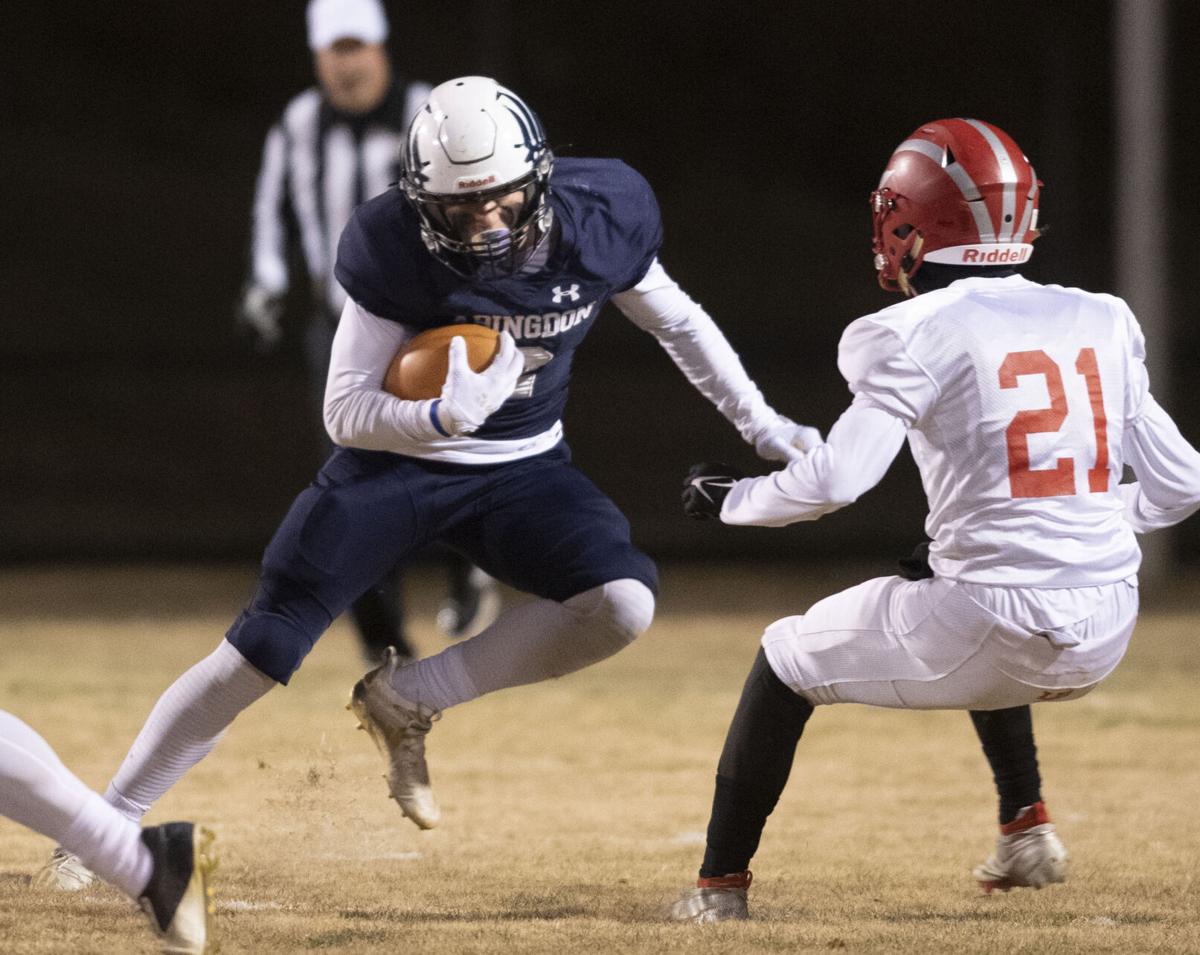 The topic was the culture within the Abingdon Falcon program.

“Coach Ratcliff and I spent a lot of time talking about our vison,” Amburgey said. “We knew that we had to get more physical and tougher.”

Ratcliff died on Aug. 30 from complications of COVID-19 at 42, but the beloved coach and former AHS linemen would have loved the performance of his old team in Friday’s Region 3D title game.

Facing a Lord Botetourt Cavalier team that prides itself on a rugged approach, AHS recorded a 28-14 win.

It was the first regional title for Abingdon since 1979. The Falcons (12-1) travel to Liberty Christian Academy this Saturday.

“That toughness factor was one of the biggest things Coach Ratcliff brought to our team,” Amburgey said. “These guys want to honor that legacy, and I’m proud of what they accomplished in this game.”

After falling behind 14-7 at the 8:37 mark of the third quarter, the Falcons rallied behind the relentless work of running back Malique Hounsell (102 yards rushing, two scores) and a pair of big plays from senior Haynes Carter.

Carter’s first magic trick was 52-yard touchdown reception from senior quarterback Cole Lambert with 7:46 left in the third. Taking advantage of single coverage, the 6-foot-1 Carter snatched the ball from the smaller cornerback.

“We practiced that play all week,” Carter said. “Our linemen gave great blocks, Cole put the ball in the right spot, and I just made a move.”

Four minutes later, Carter executed another highlight reel sequence by blocking a punt, scooping up the ball and returning it 27 yards for a score.

“We had rushers on the edge, and I saw a gap. I went through it, put my hands up for the block and followed a lane to the end zone,” Carter said. “I’ve loved this sport since I was young, and I’m always ready to make plays for my team.”

How important was Carter’s block?

“It was one of the biggest plays in the history of the Abingdon football program,” Amburgey said. “Winning the first regional championship in 42 years, no doubt that was big.”

When Lambert connected with Carter for the two-point conversion, AHS had a 21-14 lead, and Falcon fans were beginning to celebrate.

“Haynes helps us in many different ways, and I’ve never seen him get tired. It’s amazing,” Amburgey said.

With Carter, senior safety Braiden Mock and senior linebacker Charlie Sturgill setting the pace, the AHS defense blanked the Cavaliers in the final quarter. Sturgill was the latest Falcon to wear Ratcliff’s old No. 76 jersey.

“This was the most physical game all season,” Carter said. “Botetourt is big, fast and strong, but we’ve been physical since the opening week, and we showed it tonight. Our running game is huge, and that helps make our offense go.”

The LB offense was based around a big line and two speedsters in sophomore quarterback Jakari Nicely (29 carries for 126 yards) and senior running back K.J. Bratton, who collected 121 yards on 22 carries.

That tandem helped the Cavaliers (8-4) grab their quarter advantage with a 61-yard drive consisting of seven runs. The fun ended there for the Cavaliers.

Harless, a former AHS football standout, hugged each AHS player after the game.

“It’s been 29 years and eight days since my last game on this field,” Harless said. “We ran for 400 yards and beat Blacksburg 28-7 in the playoffs that night.

“It seems to me that there is more emphasis and importance for football here now. The community is involved, and I’m happy for them.”

The Cavaliers advanced to the regional finals despite three early losses.

“The most important thing for us is where we were early in the season and where we finished,” Harless said. “We had a tough beginning, and there were a lot of difficult things we dealt with. As much success we’ve had the past three years, it’s been the toughest time for me in coaching.”

“Our guys feed off the energy in this stadium, and we were able to ride that momentum tonight,” Amburgey said. “We’ve made strides each year in the playoffs.

“We came up a little short in the spring. But with our speed work, dedication in the weight room and commitment to toughness, we’re closing the gap.”

Sweat inactive for Eagles after having 'emergency procedure'

TAMPA, Fla. (AP) — Philadelphia defensive end Josh Sweat is inactive for Sunday’s NFC wild-card game after being admitted to the hospital earlier in the week for what the team described as a “life-threatening situation."

Patriots, Jones end season with a dud in 47-17 loss to Bills

ORCHARD PARK, N.Y. (AP) — After gaining so much ground during Mac Jones’ rookie season, the New England Patriots faltered at the finish.

The Las Vegas Raiders have fired general manager Mike Mayock after three seasons and will begin a search for a coach and GM following their second playoff berth in the past 19 seasons.

An extra week of games, close finishes and a non-election year helped propel the NFL to its highest regular-season ratings in six years.

Rival Patriots, Bills to meet in playoffs for only 2nd time

Encores are tougher to pull off after receiving overwhelming acclaim for trying something new.

WINFIELD, Ind. (AP) — Pro Football Hall of Famer Dan Hampton has been sentenced to one year of probation after pleading guilty to a drunken-driving charge last month in Indiana.

Cardinals, Rams to meet in playoffs despite Week 18 losses

Watt active for Cards, Weddle in for Rams in playoff meeting

INGLEWOOD, Calif. (AP) — J.J. Watt is in uniform for the Arizona Cardinals and Eric Weddle is playing for the Los Angeles Rams in the NFL West rivals' playoff showdown Monday night.

PITTSBURGH (AP) — For the first time in Mike Tomlin's long tenure as the head coach of the Pittsburgh Steelers, he enters the offseason unsure of who his starting quarterback will be in the fall.

Abingdon RB Malique Hounshell gets a couple of extra yards after the initial contact by Lord Botetourt's Sammy Peery.