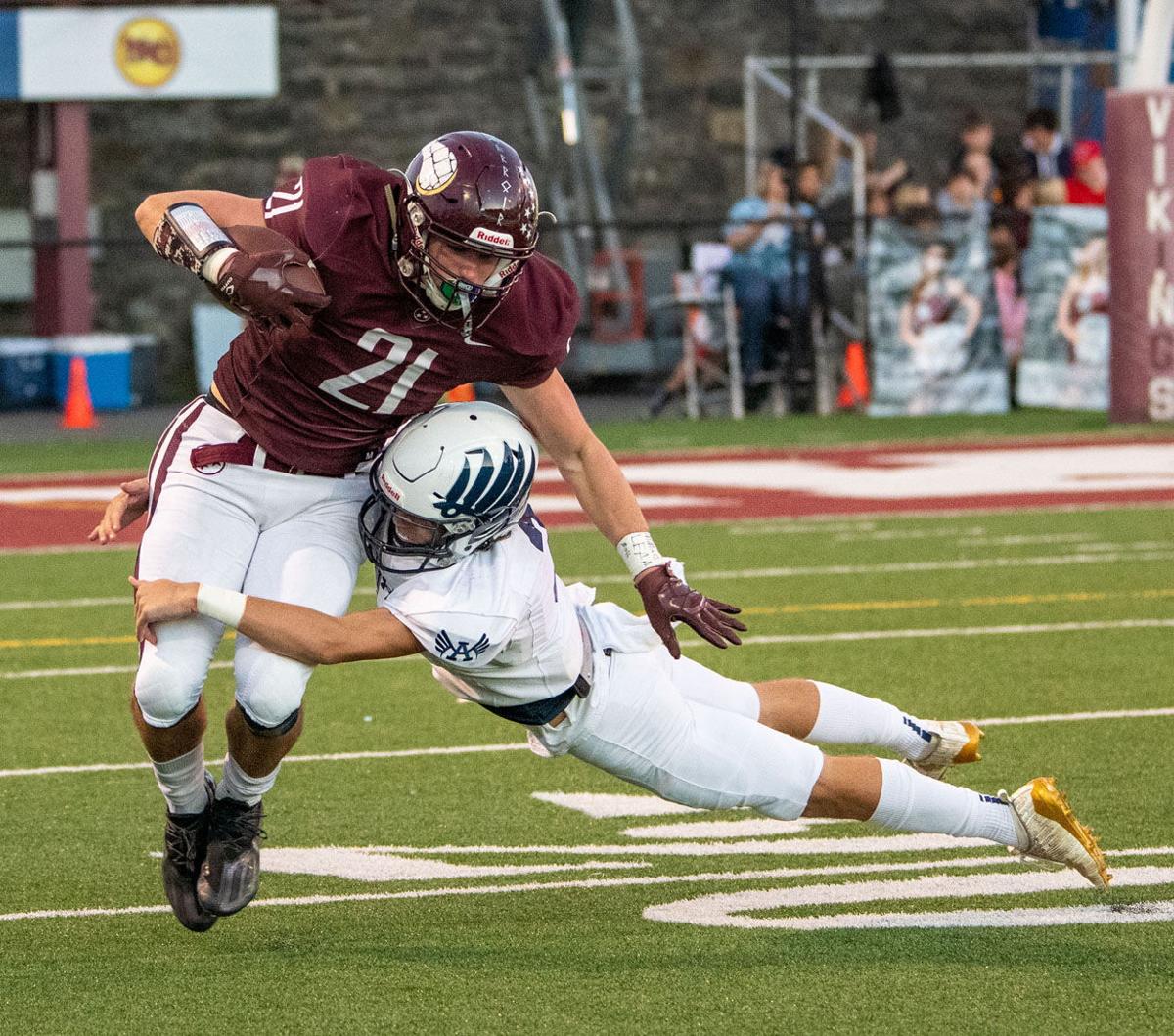 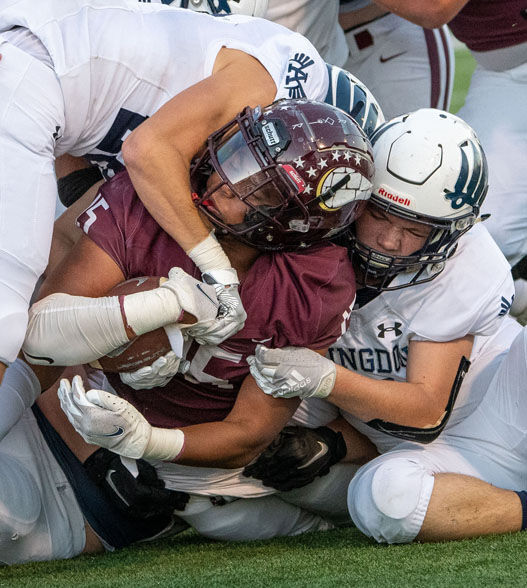 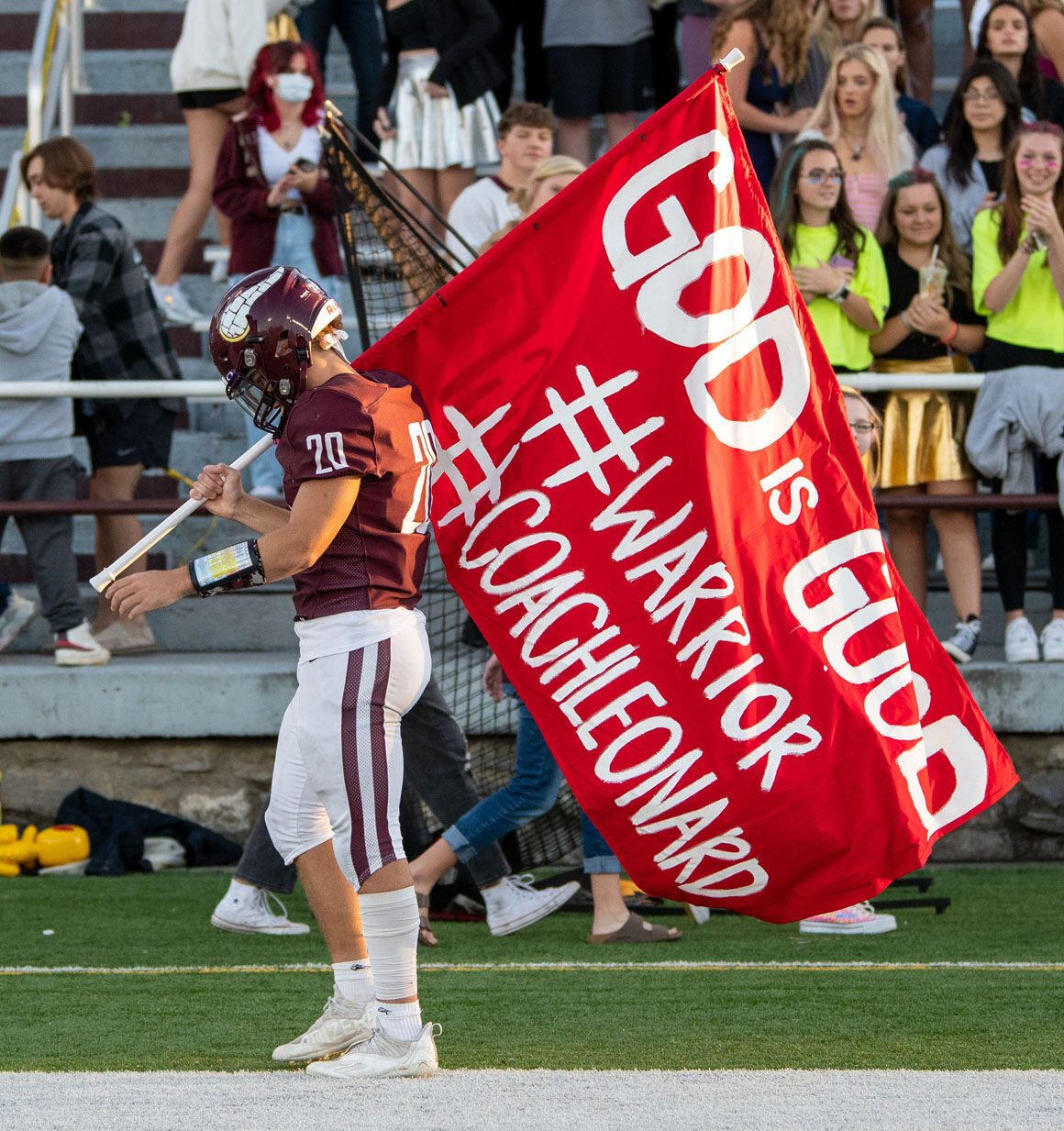 Tennessee High’s Levon Montgomery carries a flag prior to Friday night’s game with Abingdon honoring his brother, Micah, who died in a drowning accident two weeks ago, and Vikings assistant coach Trea Leonard, who passed away last week from a heart attack. 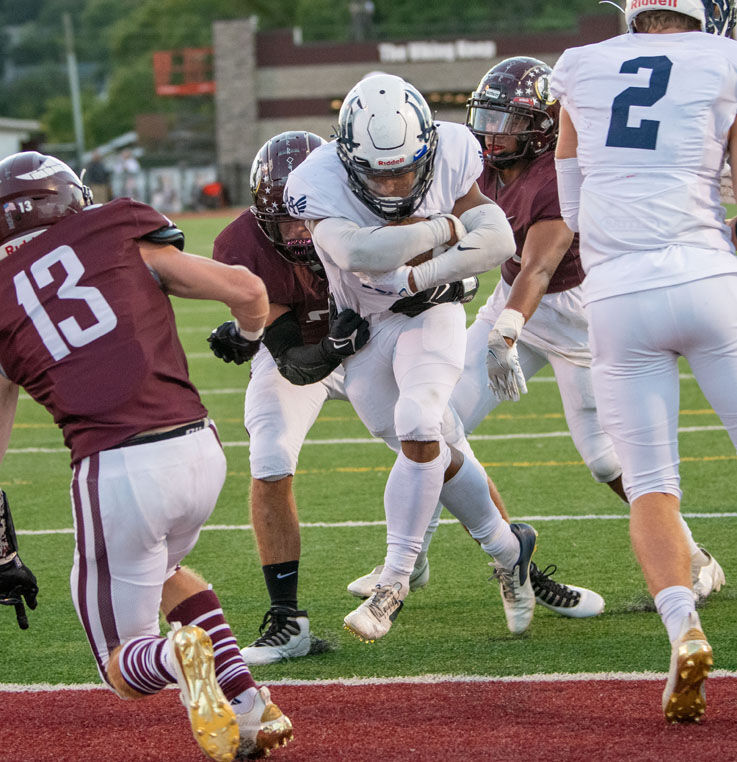 Abingdon’s Bishop Cook goes in for a touchdown.

BRISTOL, Tenn. — It’s safe to say Robb Ratcliff would have been pleased with the Abingdon offensive line on Friday night.

Bishop Cook and Malique Hounshell combined for 337 yards in Abingdon’s 34-14 win at Tennessee High on homecoming Friday night at the Stone Castle, but all credit went to the big guys up front, a unit taught by the former Falcons’ offensive line coach, who died at age 42 on Aug. 30.

Hounshell added 151 yards for the Falcons (3-1), who ran through huge holes and then refused to go down in rolling up 341 yards on the ground, led by the offensive line quartet of Charlie Sturgill, Desean Lucas, Eli Singleton and Kadin Hounshell.

“Malique and Bishop ran the ball really hard, but the point of emphasis in our pregame meetings with them was don’t go down on first contact. Keep running your feet, break tackles, but it all starts up front with our offensive line,” Abingdon head coach Garrett Amburgey said. “We stress that to our whole team. These guys have the hardest job in football, move somebody against their will.

“I am just really proud of all those guys up front and all the things they were able to do. It was just a great thing to see.”

Tennessee High (2-3) continues to play through tragedy, having lost junior Micah Montgomery to a drowning incident on Sept. 12, and defensive assistant Trea Leonard died on Sept. 18. Both, in addition to former Vikings basketball coach Dale Burns and Ratcliff, were remembered with a moment of silence before the game.

“It is very tough. I am proud of the guys,” said senior Nysaiah Foote, who put the Vikings up 7-0 in the first quarter on a 6-yard pass by Steven Johnson. “We came out here under the circumstances we have been going through, and to do that and come out here and play, it is very tough, and I am proud.”

“It was very emotional for both sides,” added Cook.

Despite the disparity in yards, the Vikings forced five turnovers, four in the opening half, leaving Amburgey happy that the Falcons were tied at 14 at the break after Johnson’s 61-yard scoring strike to Levon Montgomery.

“They came in here, and they had their heads down,” said Amburgey, whose Falcons scored in the first half on runs by Cook (4) and Lucas Honaker (1). “I came in there, and I was happy. They were like, ‘What is going on?’ And I said, ‘I am thrilled, they scored 14.’ I was happy. That settled them down though.”

It was all Abingdon after the break, with Cook and Hounshell continuing to run through huge holes, leading to 24 first downs and 13 carries for double digit yards to help the Falcons overcome a 5-2 disadvantage in turnovers.

“When we force five turnovers, we expect to win the game,” Foote said. “Our defense, we battled to the end, but we can’t expect them to make all the plays. We just have to come better on offense next week.”

Cook scored on a 2-yard run to put the Falcons up 21-14. Hounshell followed by stripping Montgomery of the football and returning the ball to the 10. Cole Lambert then connected with a leaping Peyton McClanahan in the corner of the end zone to build the lead to 27-14.

Cook finished the scoring with a 15-yard fourth quarter run.

“Their offensive line was very impressive, and so are the running backs,” Chandler said. “You try to pack the box, and they have got McClanahan and some of those guys out there, they are a good football team. I am very impressed with them.”

Tennessee High, which finished with 113 passing yards from Johnson, will play on next Friday by hosting Morristown West in a Mountain Lakes Conference game. Jackson Elliott and Davis Campbell had interceptions for the Vikings, while Ashton Leonard, Daniel Chapdelaine and Evan Smith recovered fumbles. Chapdelaine was transported from the field by cart in the third quarter.

“We have been through about the toughest two weeks of any high school in America,” Chandler said. “The bottom line, Abingdon came in here and whipped us, they whipped us. I know our kids have been down. There are several things going on right now with injuries, but it is time.

“Heading into the conference schedule, we have got a lot of work to do. We are going to have to look at moving some people around to cover up some injuries, but in the end, I just want to say credit to Abingdon, they just came in here and whipped us.”

Abingdon, which will host Wise County Central next Friday, won’t celebrate too long after this one, the Falcons’ first win over Tennessee High since 1926. They have only played twice since 1954.

Who should take over at LSU?

Lamar Jackson has most wins of any QB under 25

Lamar Jackson has most wins of any QB under 25

Gruden gone, and it couldn't have come fast enough

Jon Gruden might still be coaching had he merely been exposed as a remorseful racist.

The drip-drip of the hundreds of thousands of Washington Football Team emails into the public eye continued Tuesday night.

Abingdon football coach Garrett Amburgey devised a bold plan at the start of the 2021 spring season.

The Lee High Generals failed when it came to stopping Patrick Henry standout J-Kwon McFail, and the Abingdon Falcons rolled to a win over Richlands.

Chiefs coach Andy Reid was feeling ill, according to a team official, and therefore did not address the media after the team’s 30-24 loss to the Los Angeles Chargers.

Every NFL fan knows in times of trouble there is a word the league turns to get itself out of a jam — "distraction."

Mike Bianchi: NFL should have fired Jon Gruden months ago when emails were discovered

First things first: Hopefully, Urban Meyer has sent Jon Gruden a nice fruit basket and a giant thank-you card for knocking Meyer off the front page and into a secondary spot within the coaches-acting-like-idiots subsection of the 24-hour news cycle.

Dan Wiederer: ‘All my (bleeping) life! I own you!’ With a win-sealing touchdown run — and one harsh insult — Aaron Rodgers adds to the Chicago Bears’ misery again

Maybe the fan was a figment of his imagination.

Tennessee High’s Levon Montgomery carries a flag prior to Friday night’s game with Abingdon honoring his brother, Micah, who died in a drowning accident two weeks ago, and Vikings assistant coach Trea Leonard, who passed away last week from a heart attack.

Abingdon’s Bishop Cook goes in for a touchdown.