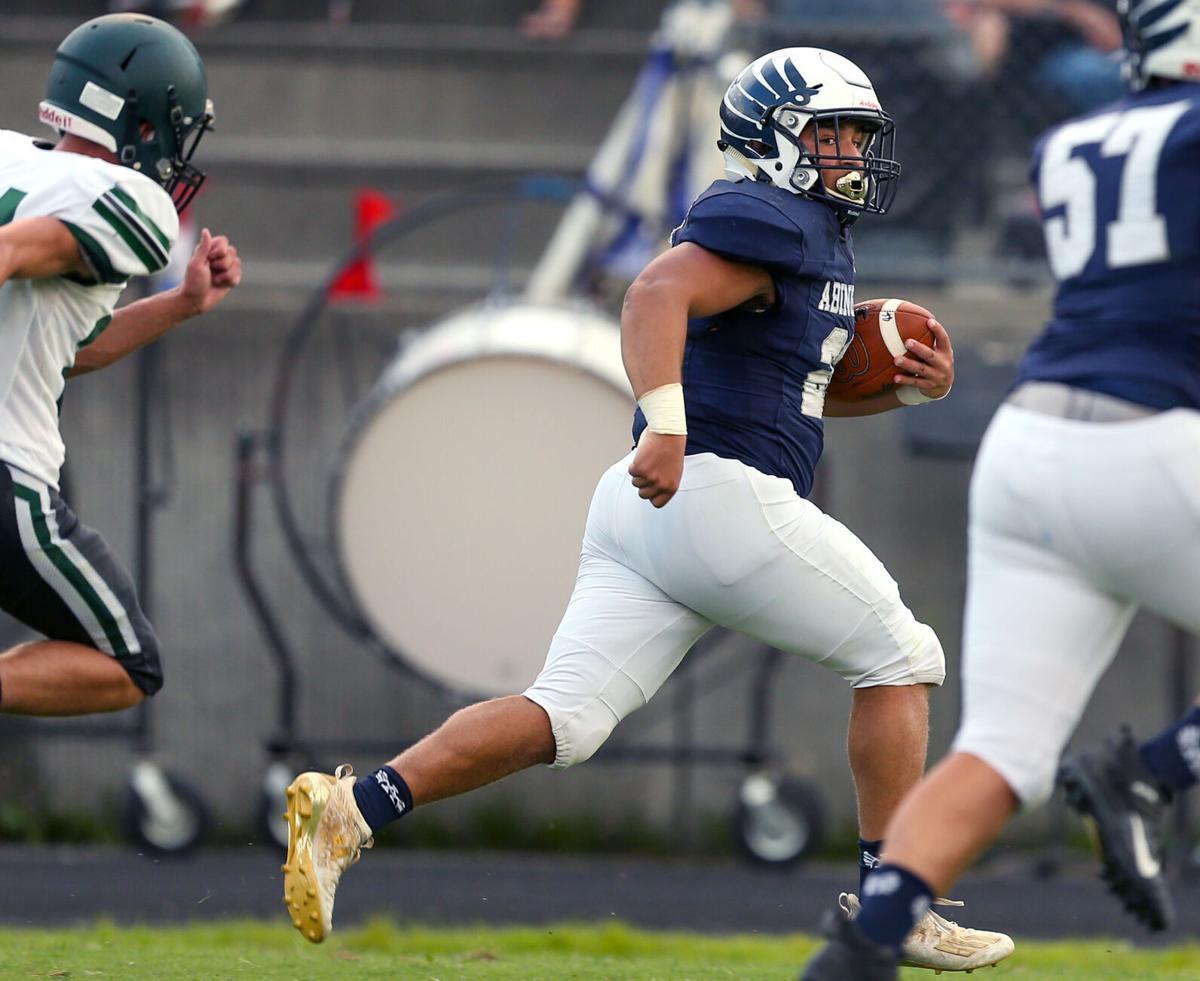 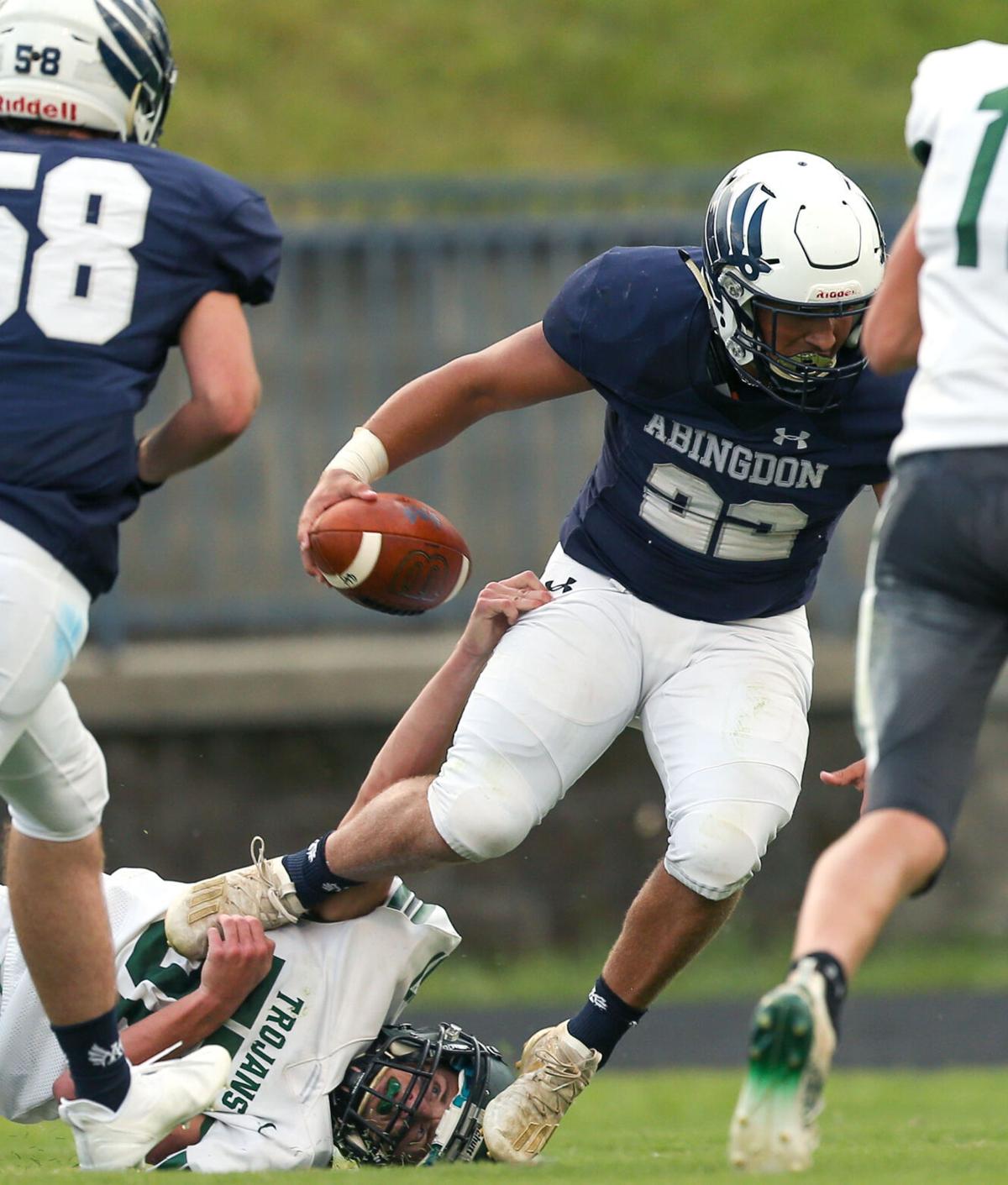 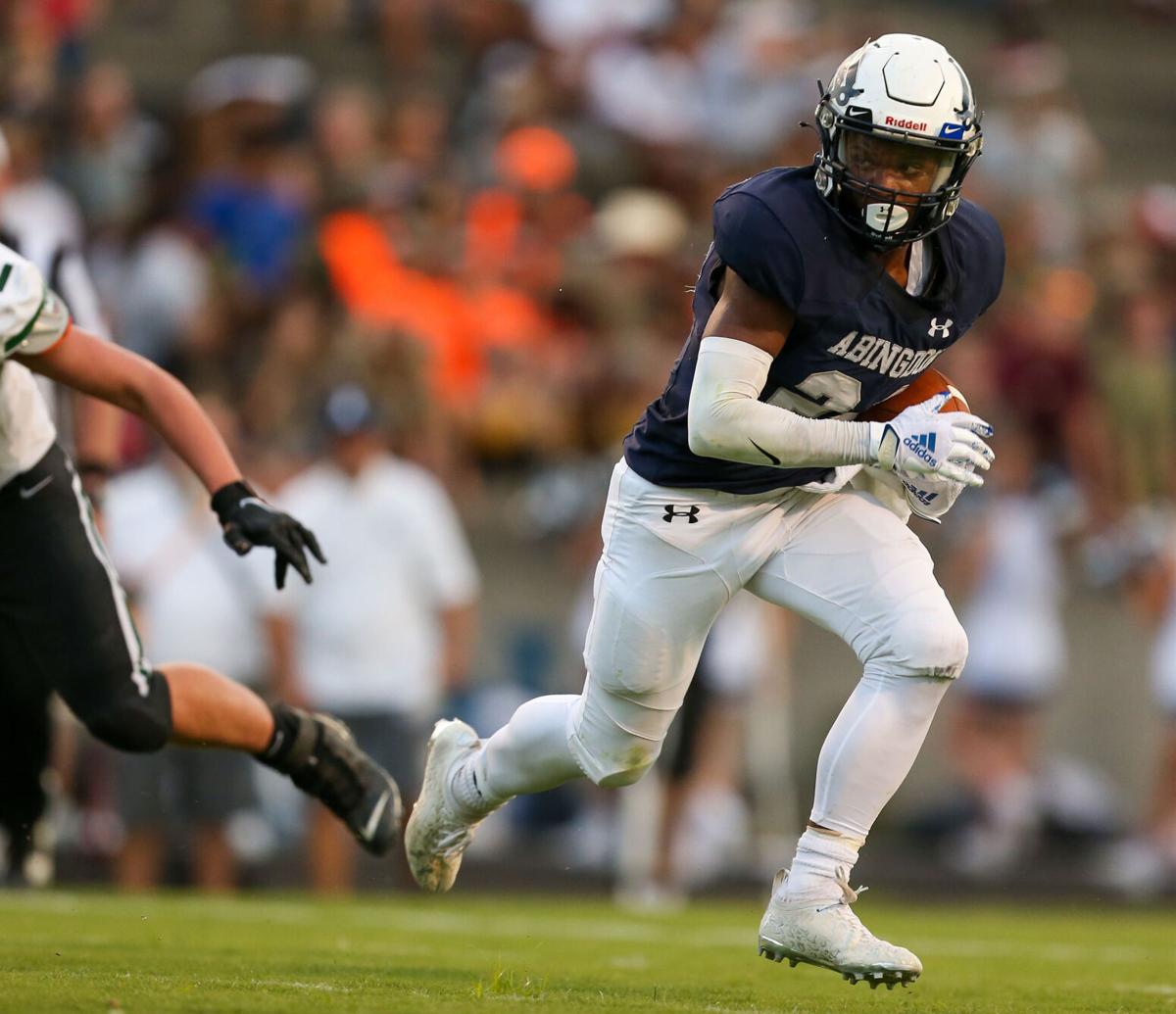 Abingdon's Bishop Cook breaks into the open against John Battle. 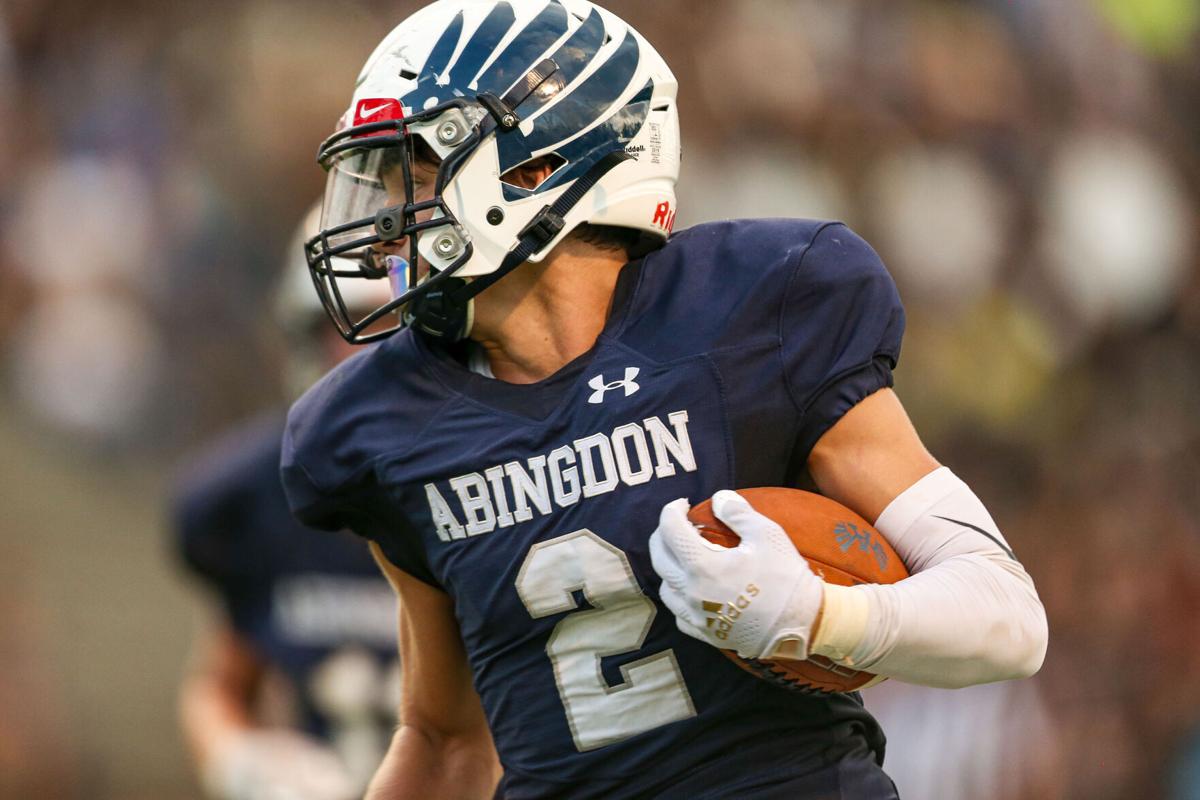 Abingdon's Haynes Carter breaks into the open against Battle. 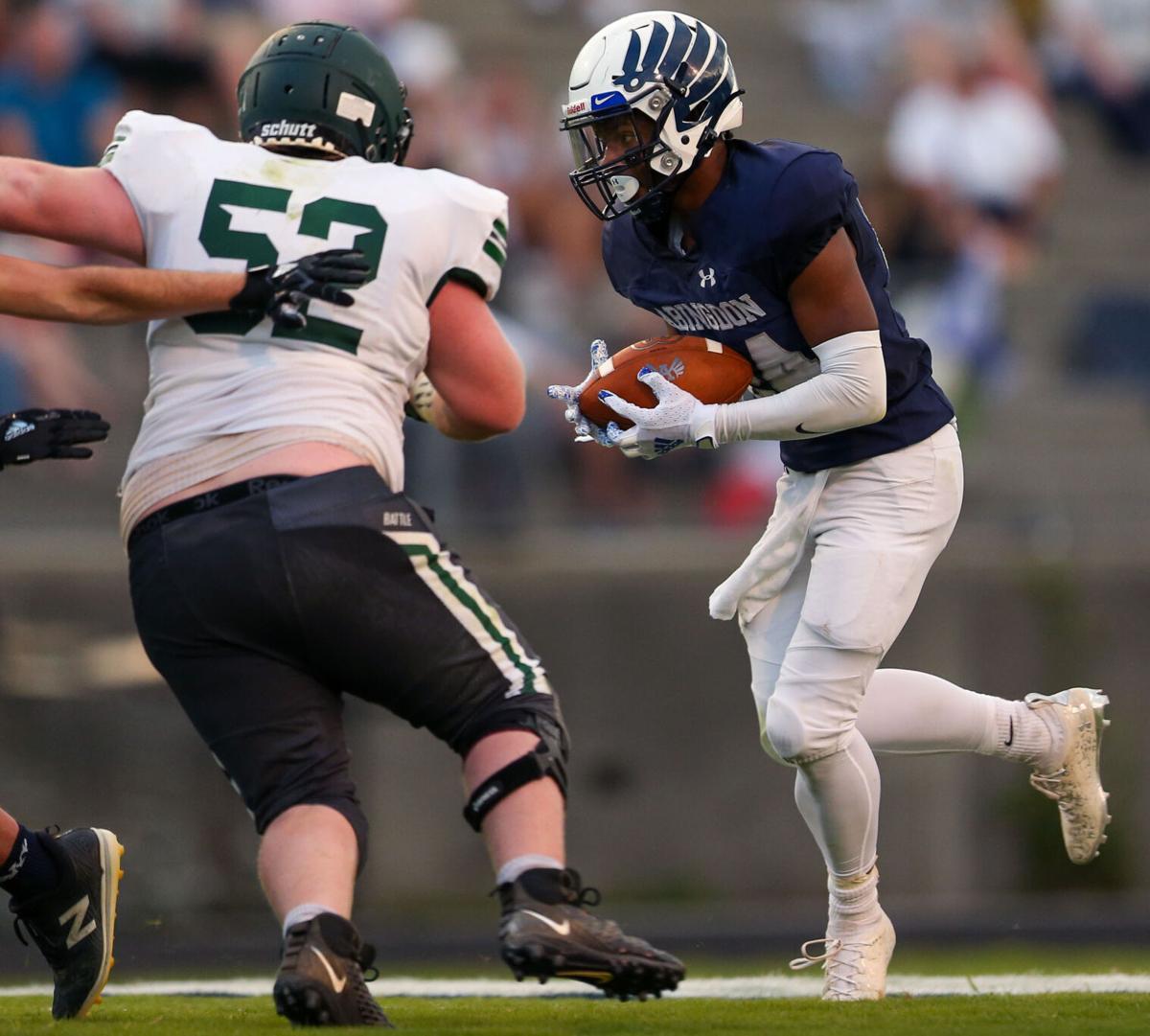 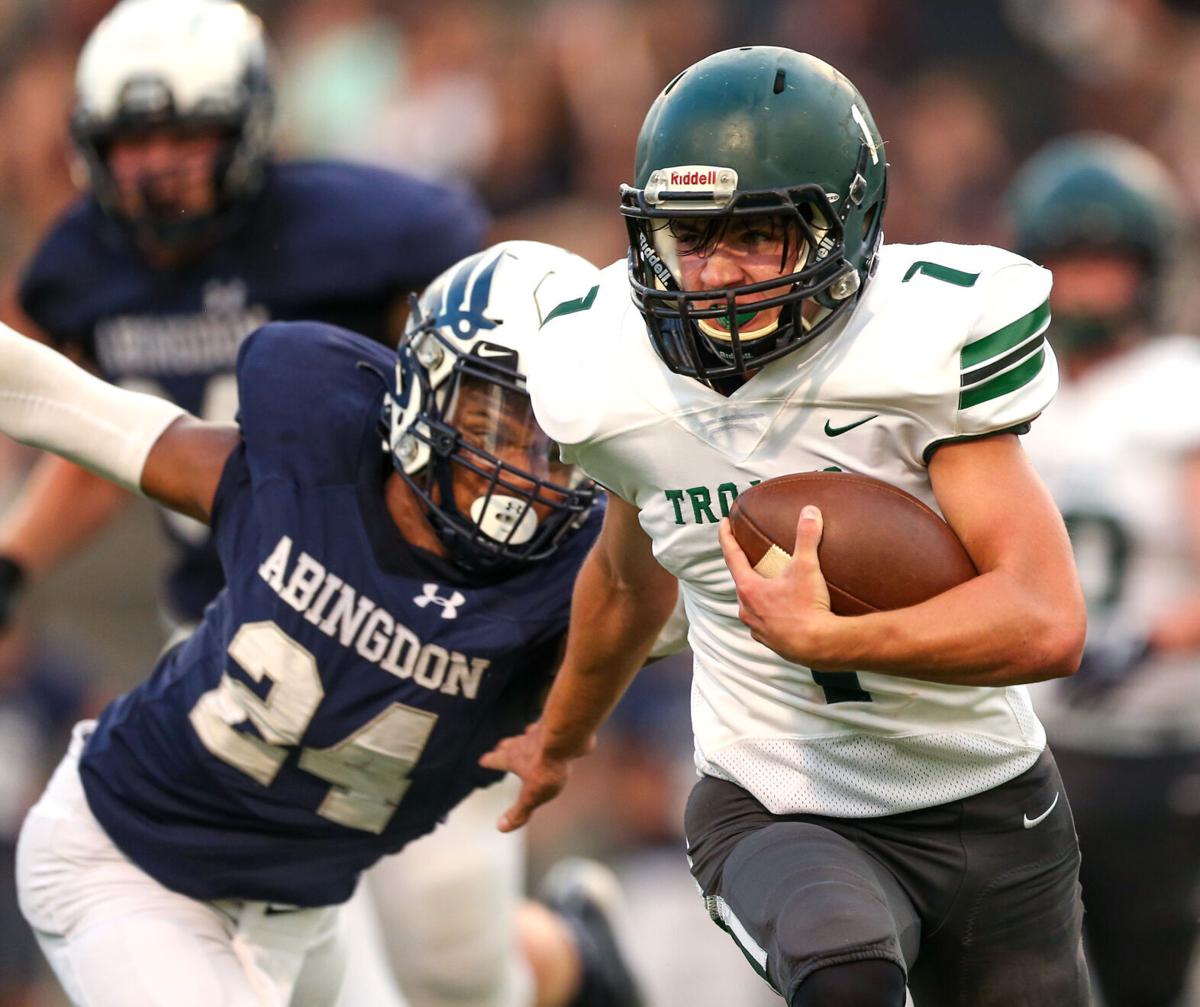 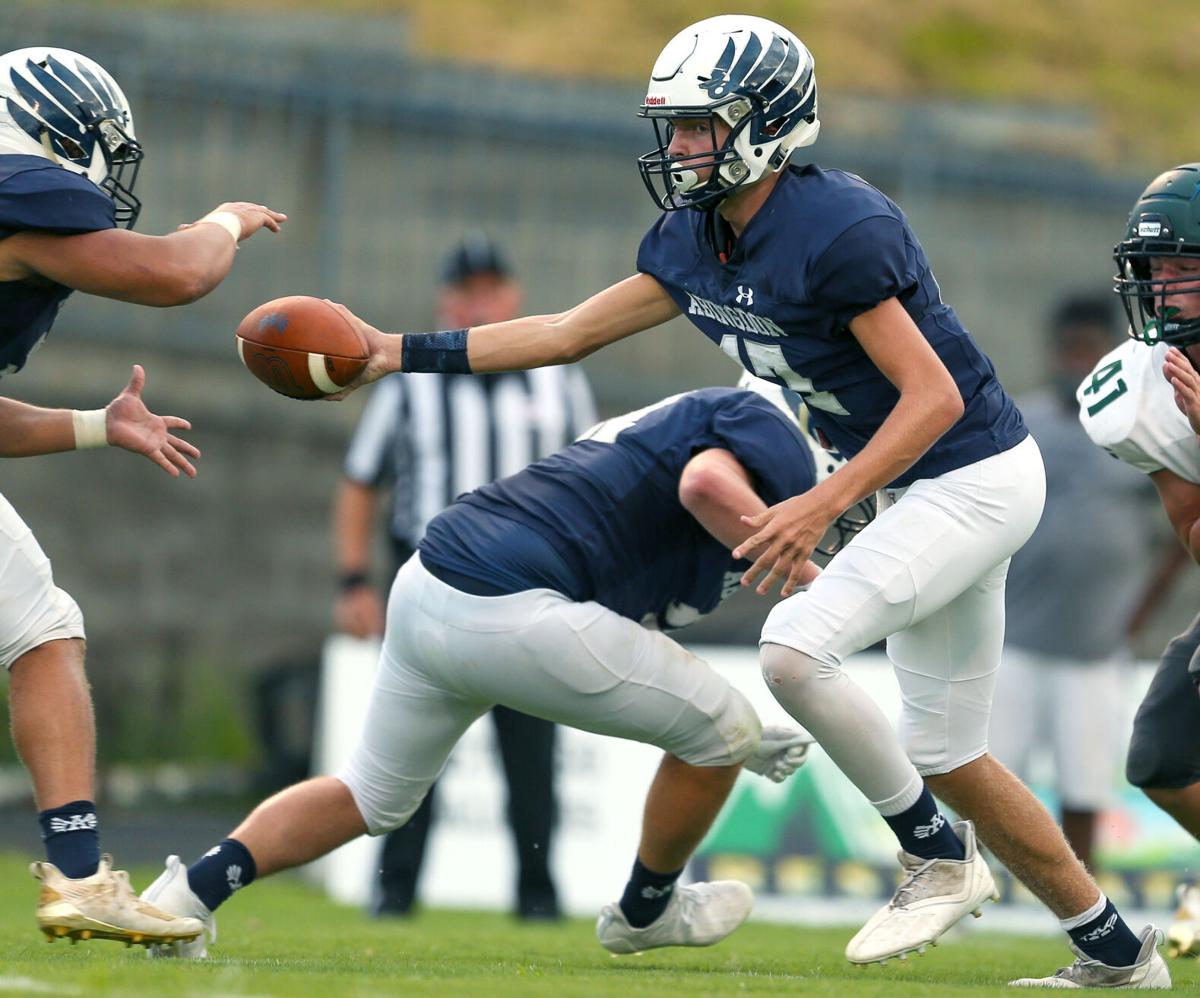 Abingdon QB Lucas Brooks turns to hand the ball off against John Battle. 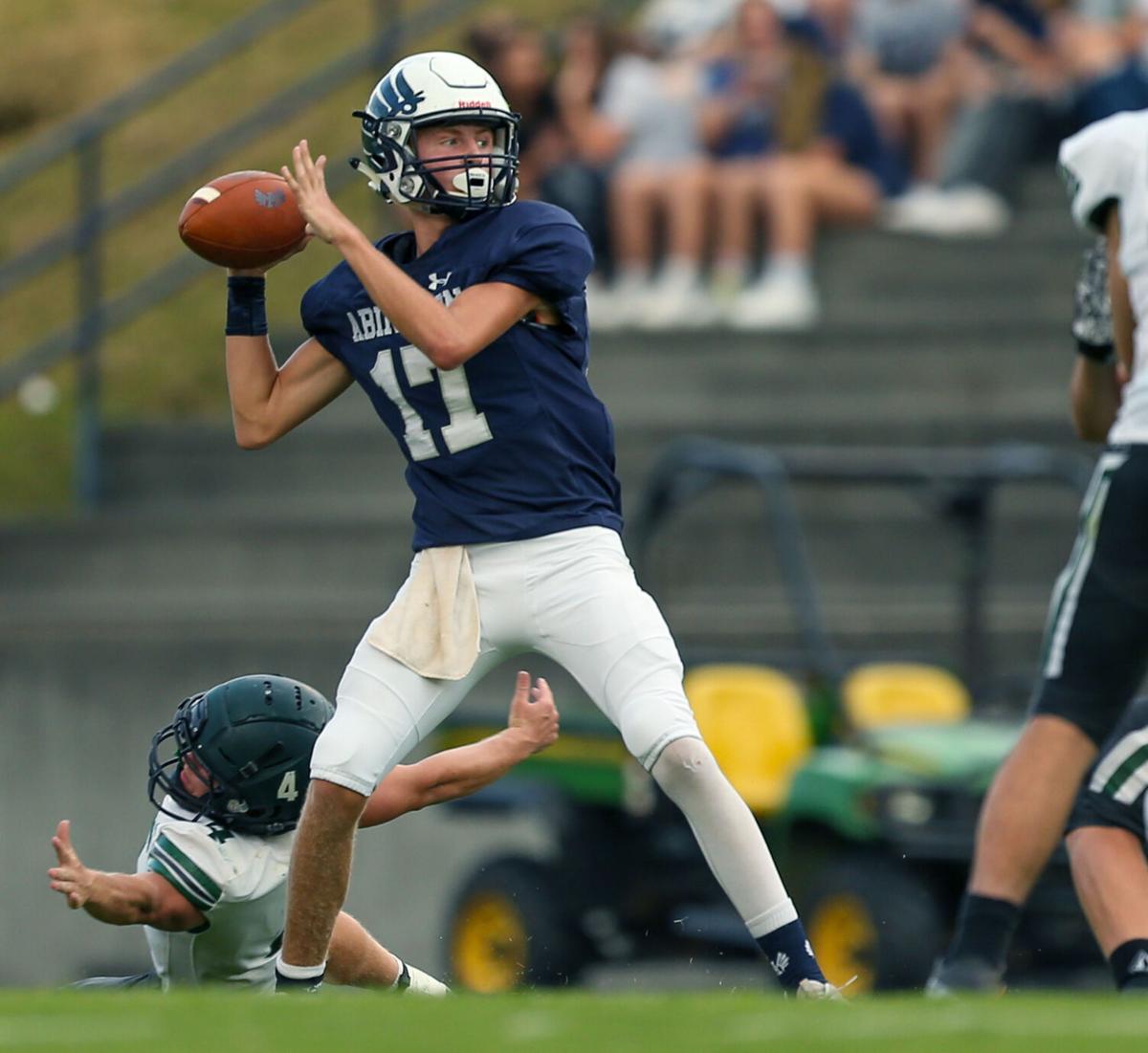 In 2015, quarterback Jake Sturgill used his arm and intelligence to guide the Falcons to the 3A West semifinals.

Another Sturgill starred Friday before a large crowd at Falcon Field.

Charlie Sturgill, 6-2, 250-pound senior, dominated at outside linebacker as Abingdon earned a 41-0 win over John Battle in the Mountain 7 District opener.

“I grew up going to all of Jake’s games and watching everything he did,” Charlie said. “Those are some big footsteps to follow, but Jake inspired me and taught me well.”

Sturgill and the Falcons ended the suspense early Friday by opening a 35-0 halftime lead. The second half featured a running clock.

Relying on a variety of options, AHS rushed for 149 yards and passed for 197, while allowing just 58 total yards

“You can never be perfect in the first game, but our effort and intensity were where they needed to be,” AHS coach Garrett Amburgey.

Intensity is never an issue with Sturgill, who often shows his emotion after big plays such as his back-to-back sacks Friday.

“I do the dirty stuff so my team can get the fame and glory. It’s all about winning for us,” Sturgill said.

In his first varsity start, Brooks threw for over 180 yards and hooked up with McClanahan, 6-1 senior Haynes Carter and 5-11 senior Braiden Mock for scores.

“Lucas has a big arm, and he can really throw it down the field,” Amburgey said. “Our receivers made plays, our backs ran hard, and our linemen did their jobs. And it’s always great to get a shutout.”

John Battle entered the game with a couple challenges.

According to coach Brad Ricker, the Trojans were unable to compete in a jamboree last week at J.I. Burton due to COVID-19 protocols. On Friday, Battle missed leading tackler Miguel Blanco due to an injury suffered this past week in practice.

“We play who we’re scheduled to play,” Ricker said. “Abingdon is a good team, and those guys came out playing physical. This was a good experience for our kids to get out here and work. Now, we’ve just got to work on getting better.”

The highlight for Battle came on a 35-yard run by sophomore quarterback Braxton Emerson.

John Battle had little time to operate on offense because of the pressure applied by Carter, senior linebacker Timmy Jessee, junior lineman Eli Singleton and the ever-present Sturgill.

“We saw flashes of the team that we can be,” Amburgey said. “Now, we just need to put it all together.”

Unlike his older brother, Sturgill has been content to deliver big hits instead of launch long passes.

“I think I can throw a tight spiral, but I’ve just got a little more weight than Jake,” Sturgill said.

There were plenty of backyard football games involving Charlie, Jake and their other brother Roby, who played on the line at AHS.

“Those games involved Jake throwing the ball as hard as he could at me to see if I could catch it. And he threw it so hard, my hands bled,” Charlie said. “My brothers were tough on me, and they made me love the game.”

What was the most important lesson Charlie learned from his bothers?

“They showed me that with hard work and dedication, you can do anything,” Charlie said. “I played some tight end here as a sophomore and got moved to the varsity late in the season. That was a blast.”

Amburgey said that Sturgill has the right approach to thrive at any spot. Amburgey also coached Jake Sturgill.

“Charlie is a fun and physical guy who did great things for us last year on the offensive line. This season, he’s doing great things on defense,” Amburgey said.

Charlie was selected as the Mountain 7 District offensive lineman of the year last season.

“I’m too big to play quarterback, but I love what I’m doing,” Sturgill said. “It felt so good to be back on this field again with all these fans in the stadium.”

EAST RUTHERFORD, N.J. (AP) — Joe Schoen was at the top of the New York Giants' list of candidates when they started their search for a new general manager, and the Buffalo Bills assistant GM never left that spot.

Sweat inactive for Eagles after having 'emergency procedure'

TAMPA, Fla. (AP) — Philadelphia defensive end Josh Sweat is inactive for Sunday’s NFC wild-card game after being admitted to the hospital earlier in the week for what the team described as a “life-threatening situation."

Waking up Sunday morning in Chicago to five inches of snow and Dick Butkus trolling Aaron Rodgers was a beautiful thing.

NASHVILLE, Tenn. (AP) — The Tennessee Titans have taken big steps in four seasons with coach Mike Vrabel reaching an AFC championship game and earning back-to-back AFC South titles along with a No. 1 seed.

To the naked eye, the 2011 Washington Football Team was a wholly unremarkable collection of talent that stumbled to a forgettable 5-11 record and last-place finish in the NFC East.

Burrow keeps going down, but Bengals keep moving on

CINCINNATI (AP) — Joe Burrow took another beating against the top-seeded Tennessee Titans in the divisional round of the playoffs on Saturday.

Eagles say Jalen Hurts will be their starting QB in 2022

PHILADELPHIA (AP) — The Philadelphia Eagles say Jalen Hurts will be the team’s starting quarterback in 2022.

A six-point victory seemed like a rout this wild weekend.

Abingdon's Bishop Cook breaks into the open against John Battle.

Abingdon's Haynes Carter breaks into the open against Battle.

Abingdon QB Lucas Brooks turns to hand the ball off against John Battle.