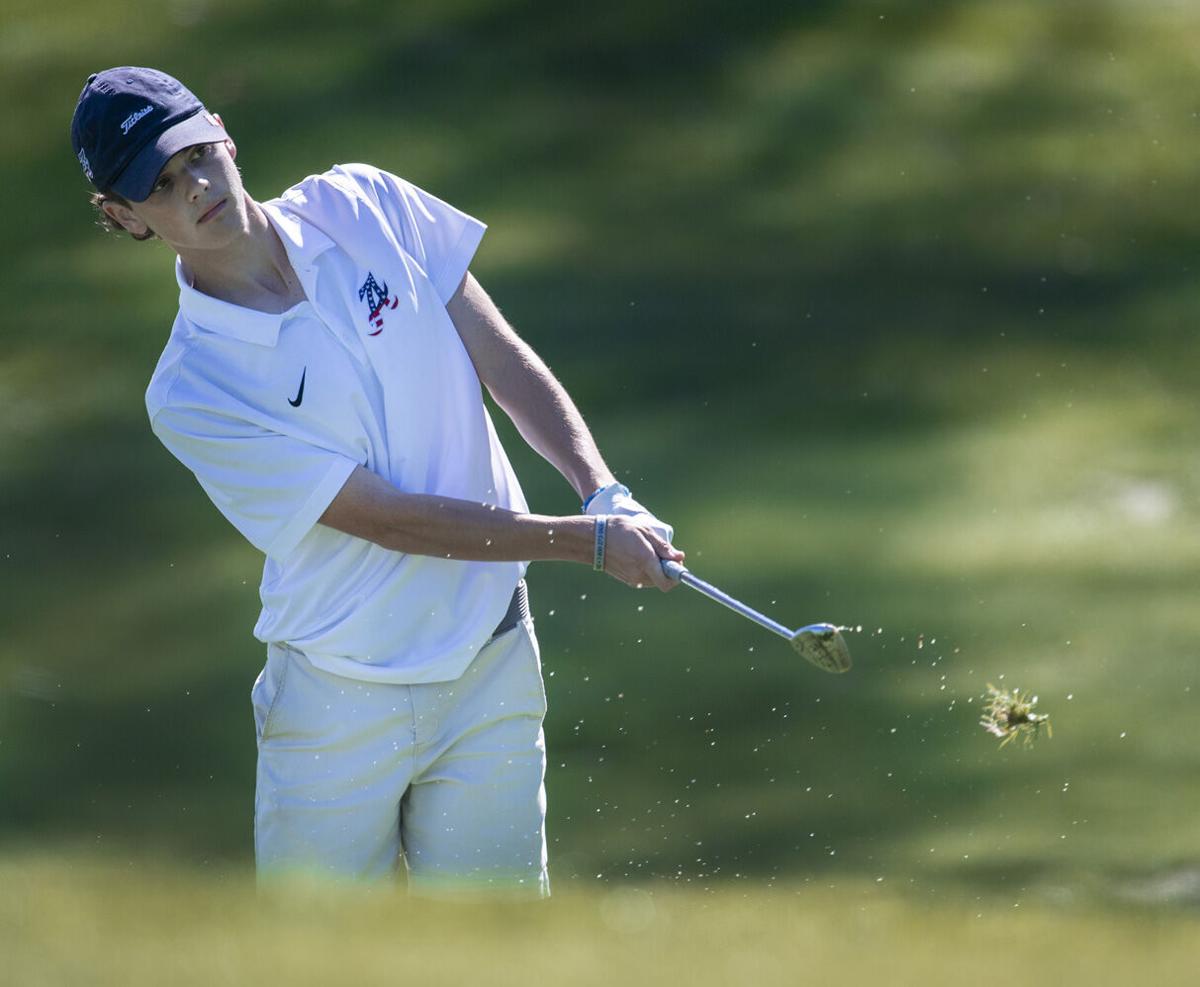 Abingdon's Will Watson hits a short approach shot on Monday during the VHSL Class 3 State Championship at Glenrochie Country Club in Abingdon. 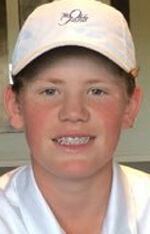 ABINGDON, Va. — It was a memorable 24 hours for golf prodigy Conner Brummitt.

Last Sunday, Brummitt finished up a week of practice and competition at the PGA Junior League National Championship in Scottsdale, Arizona.

By the next afternoon, Brummitt was celebrating another huge achievement with his Abingdon High School Falcon teammates.

Before a large and supportive gallery at Glenrochie Country Club, AHS stormed to its sixth state golf championship in the Class 3 tournament.

With an even-par score of 288, the Falcons also earned their fifth state crown in the last seven years. Hidden Valley (312) and Lafayette (323) were next in line.

“I’m tickled to death,” AHS coach Jason Delp said. “We shot some really good numbers early in the season, but I told the team that we just needed to play solid today and not let the excitement and pressure take over.

“Playing on your home course is an advantage, but we had to work just to qualify [for] this tournament.”

Senior Will Watson set the tone for AHS with a 70. Brummitt followed with a 71, with junior Grace Addison (73) and senior Caleb Brummitt (74) next in line.

As the older brother to Conner, Caleb has provided mentorship and motivation.

“My brother has pushed me to get to the level I’m at,” Conner said. “And having three seniors on this team takes some of the pressure off me because I know they will put up good scores.”

Watson, a Virginia Tech recruit, continued his personal comeback by placing second in the individual standings in his final prep tournament. Watson was slowed by arm and back injuries in the spring.

“It was a super sentimental time when I left home this morning, but I was just happy to have the opportunity to compete at state again,” Watson said.

The day had another bittersweet twist for Watson, who hit 17 greens but was forced to settle for a runner-up finish for the third year in a row. Lord Botetourt junior Ashton Harper claimed the title with a 66.

“That stings a little, but it’s hard to complain with my round,” Watson said. “I just played steady and tried not to step out of my comfort zone. Considering we had three inches of rain over the past three days, the course was in really good shape.”

The 6-foot-1 Harper also qualifies as a golf prodigy. Just a few weeks ago, he competed with current Champions Tour regular Fred Funk in a First Tee tournament at the famed Spyglass Hill and Pebble Beach courses in California.

“That gave me a lot of confidence,” said Harper, who shot 5-under for the three rounds in California.

Harper finished eighth at the Class 3 tournament at Glenrochie last spring. He said the course played totally different during this year’s tournament.

“It was firm and fast last time, but the conditions were softer today, and the greens were a little slower,” Harper said. “I left a few shots out there, but I was pretty happy with my score.”

Brummitt was both happy and relieved. His morning adventure included an over three-hour flight from Arizona to Nashville International Airport, followed by a four-hour drive to Washington County.

“I slept on the drive and got back home just before 6:30,” Brummitt said. “I was at Glenrochie by 9, and I had two McDonald’s breakfast burritos on the course.”

What about all those freshman nerves?

“I was really nervous in Arizona because that tournament was on ESPN,” Brummitt said. “The experience of playing in Arizona helped this afternoon. I missed a lot of short putts, but winning state as a team definitely makes up for that.”

Innovative insulation unveiled for Team USA ahead of Winter Olympics

Brawl breaks out between Cowboys, 49ers fans outside AT&T Stadium

Brawl breaks out between Cowboys, 49ers fans outside AT&T Stadium

Abingdon's Will Watson hits a short approach shot on Monday during the VHSL Class 3 State Championship at Glenrochie Country Club in Abingdon.