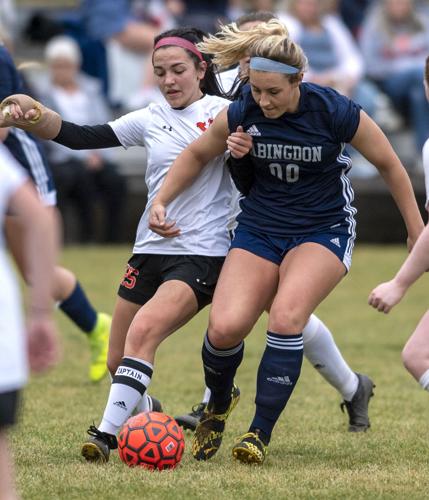 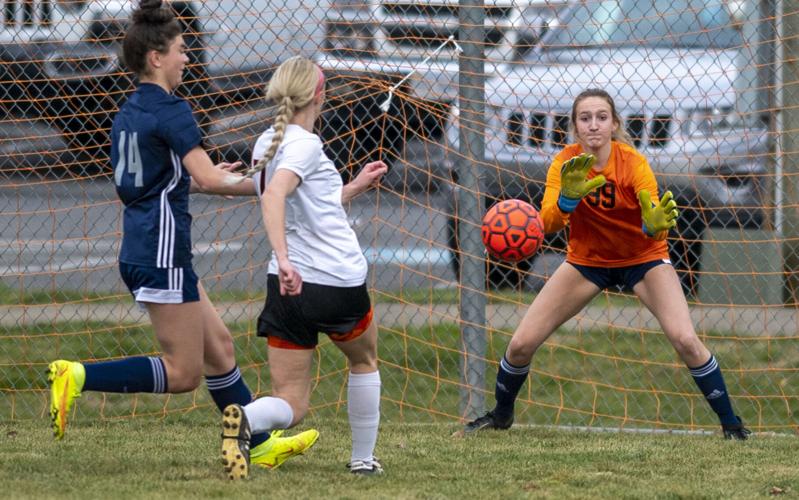 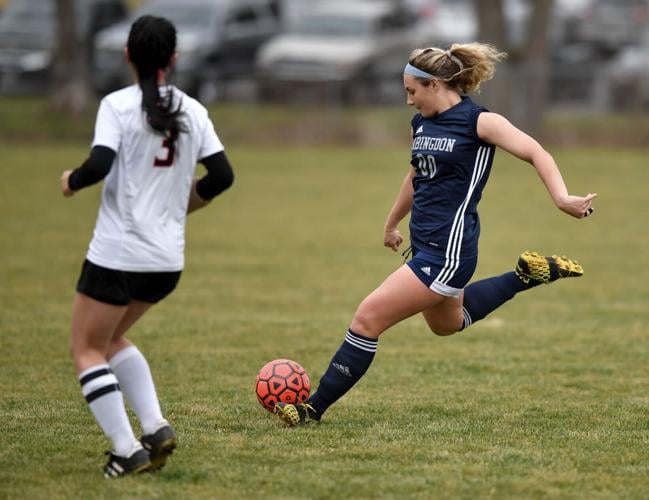 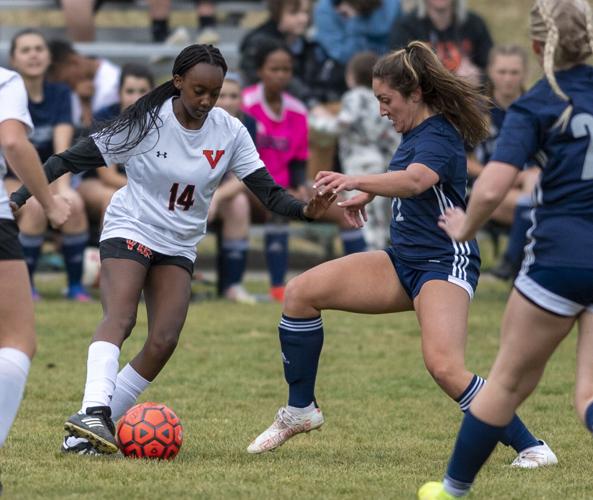 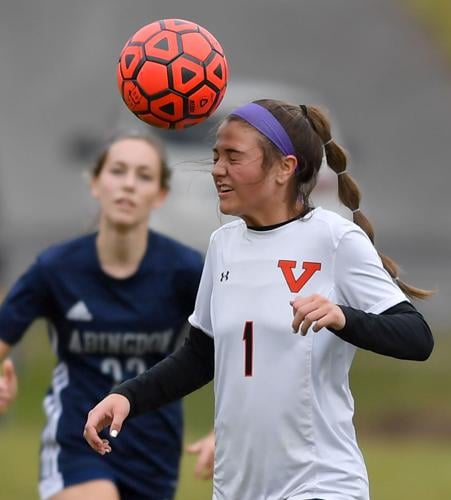 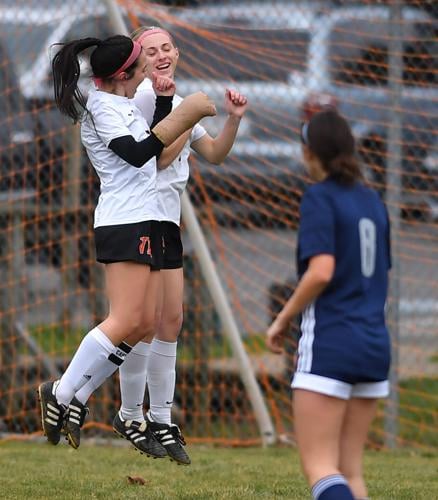 After scoring the first goal of the match, VHS's Addie Ratcliffe celebrates with Maria Wilson as Abingdon's Megan Kid looks on.

“One goal from the state championship, and it was from like five yards past the light pole,” said Virginia High girls soccer coach Justin Hayden, of a 40-yard goal that proved to be the difference in a 1-0 Class 2 state semifinal home loss to Radford. “It was crazy. I am still hurt by it.”

The goal now is to take it one step further.

“We want to always progress, we want to be a program that is taking steps forward every year,” said Hayden, whose Bearcats improved to 2-0 with a 3-2 win over Abingdon on Friday night at Sugar Hollow Park. “Not too many more steps.”

Maria Wilson followed a first half goal by Adie Ratcliffe with two of her own off a direct kick and penalty kick due to handballs from the Falcons, as the Bearcats built a 3-1 lead at the break. Virginia High freshman goalkeeper Tori Kariuki was effective in goal and was aided defensively by her sister, Myra Kariuki, along with Paris Martin and Kaleigh Hampton, who Hayden credited with “saving” the win with a tackle in the final minutes.

“[Adie] is a weapon, so fast, she is such a good athlete,” Hayden said. “We are excited about our weapons up front, and we have got some new girls playing defense, and they came up really strong.”

Burgin Peak scored a first half goal for Abingdon, and Ella Seymore added one after the break for the Falcons, who were playing their first match of the season.

“We can’t beat ourselves,” Abingdon girls coach Jordan Blackson said. “The second half I think we out-possessed them a lot, had some opportunities, just couldn’t really put it away. Obviously we wanted to be on the other side of it, but we knew what Virginia High had coming in. We knew what we were expecting, a close game, and that is what we got.”

An own goal broke a scoreless tie 60 minutes into the boys match, and Caleb Denton added a second goal off an assist from Rylan Kreps to lift the Falcons to victory.

Abingdon (1-0-1) was the aggressor for much of the match, led by James Whitted and William Johnson, couldn’t get shots past Virginia High goalkeeper Josh Worley, who had double figures in saves.

Virginia High (0-1) had scoring opportunities, but Abingdon goalkeeper Dennin Jenkins had seven saves to help the Falcons get the win for Anderson, who spent eight years as a player and assistant coach for the Bearcats.

“Abingdon and Virginia High, we are both Virginia High boys, and we know it is a hard-fought game,” Virginia High boys coach Kevin Wright said. “We know there is an intensity aspect between both cities. An own goal, that is something we can prevent, and even a defensive collapse on the second goal.

“It could have been 1-1, 2-2, so mark your calendar for the next one. It is definitely one of those games.”

After scoring the first goal of the match, VHS's Addie Ratcliffe celebrates with Maria Wilson as Abingdon's Megan Kid looks on.