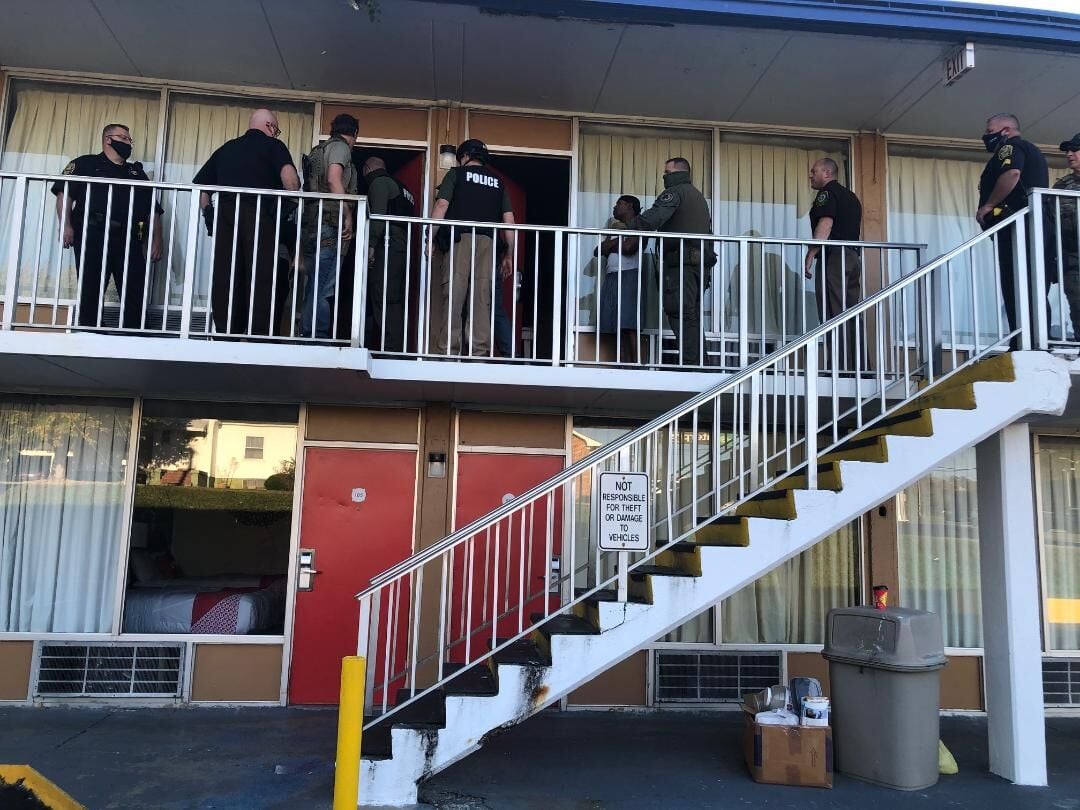 Law enforcement officers  knock on doors and speak to guests at the OYO Hotel looking for people wanted on drug charges. 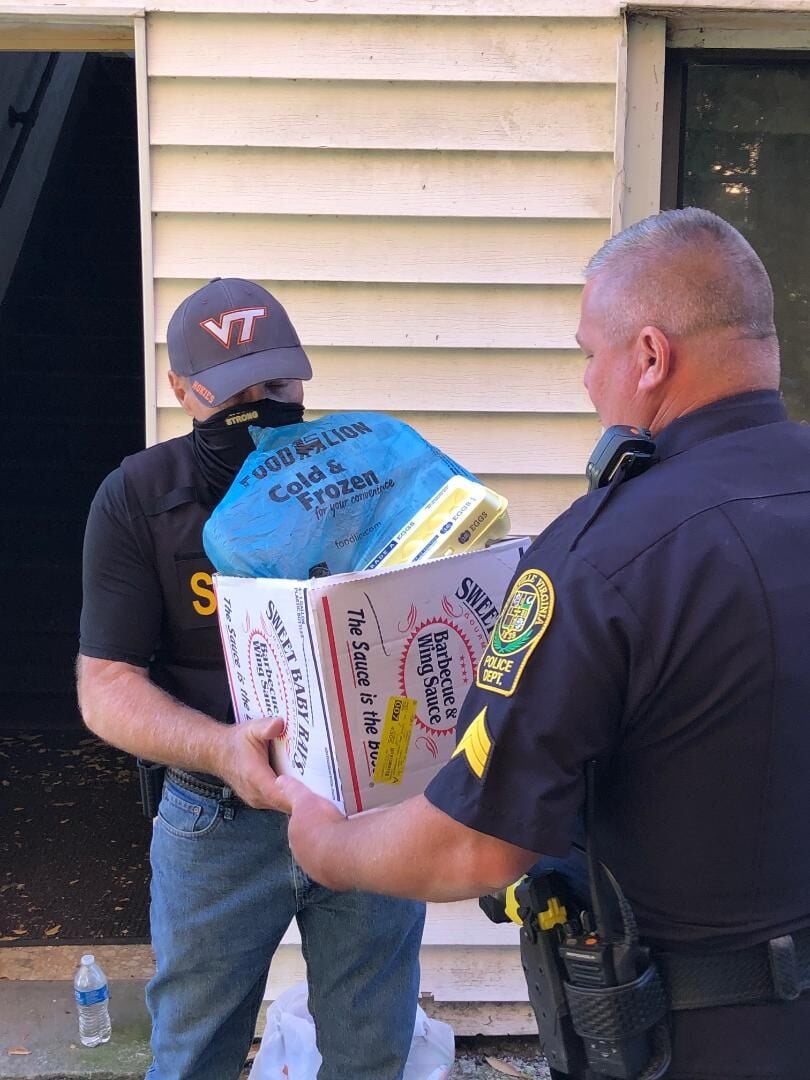 While officers looked for a suspect at an apartment building, volunteers from the Agape Food Pantry arrived with a food box for one of the residents. Officers kindly took the box and delivered it. 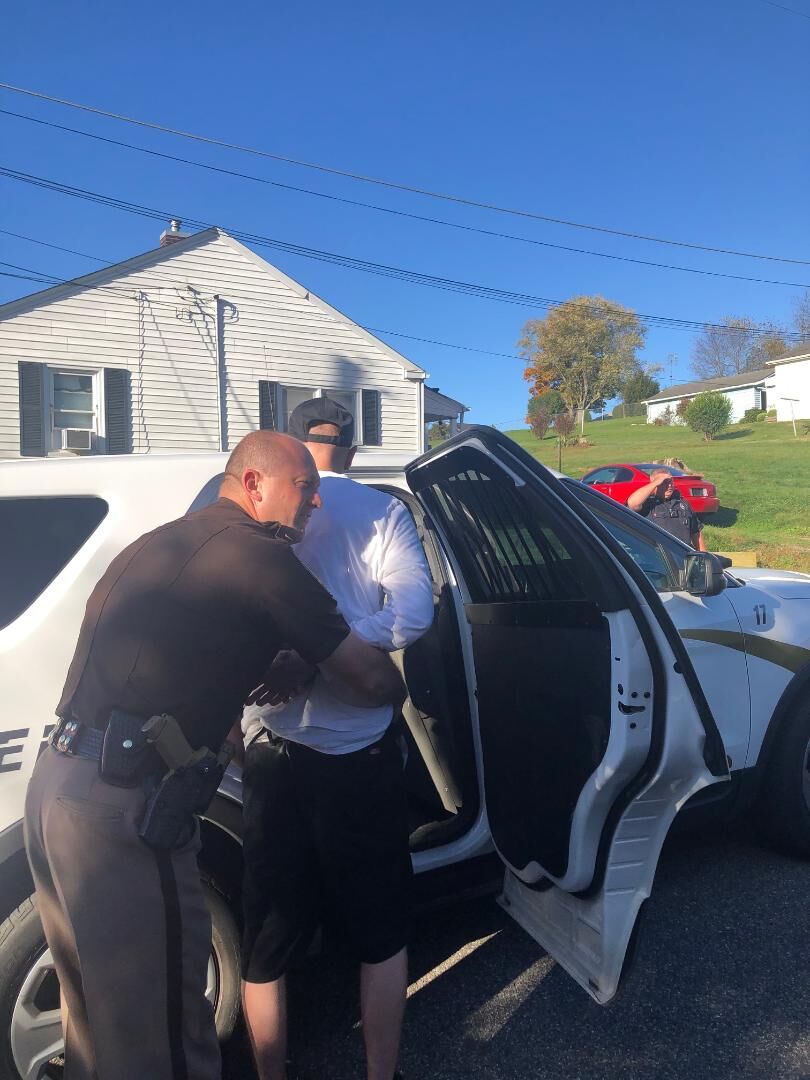 The morning of Oct. 21 dawned crisp and clear with a high temperature predicted to be near 80 degrees – a glorious day for a drug bust. Or two. Or three…

At 8 a.m., the Wytheville First Church of God was the safest place in Wythe County as members of the Wythe County Sheriff’s Office, Wytheville Police Department and the Virginia State Police gathered in the sanctuary. Together, they prayed for their safety and the safety of the community.

Then, they got down to business, an undercover officer announced who would be on which one of four teams – one for the eastern part of the county, one for the western part and two for the in-town drug raids.

Operation Spider Web was underway. Throughout the day, the teams would round up more than 30 people wanted on felony drug warrants, mostly involving methamphetamine.

The suspect list included more than 50 individuals – some of them already in jail – wanted on a total of 96 felony charges.

Planning for the operation started about six months ago when undercover officers purchased drugs, which were sent away for analysis, a process that can take four to six months, Cline said. When the test results arrived, the cases were sent to a grand jury whose members handed down sealed indictments.

Law enforcement officials wait until 40 to 50 indictments build up, and then swarm in for arrests.

First stop for one of the in-town teams: the OYO hotel on East Main Street. In stealth mode, eight to 10 officers make their way to the second floor and pound on a door – boom, boom, boom.

“Police department, come to the door!” one of them yells.

In one room, they find their man and arrest him.

The sad part about that arrest, Cline said, is that the man’s wife and young son were in the room.

In another room, a woman claims no knowledge of a second man for whom they search. They show her a photo.

Next, it’s on to Northwinds Apartments, where a handcuffed man is led quietly to a squad car that carries him to the magistrate’s office. Within an hour, a line forms outside the office as police follow social distancing protocol and line the suspects up six feet apart. Inside, an officer sprays the holding cell every hour with a disinfecting fog.

Wednesday’s busts weren’t like the ones on TV, where officers rush in and suspects flee. In fact, it was downright mannerly at times.

You’d be mannerly, too, if you looked outside your window and saw a group of armed officers waiting for you, Cline said.

One suspect actually called Capt. Doug Tuck to ask him why there were so many police cars at his house and were they looking for him. Tuck said yes, and the suspect told the veteran officer where to pick him up. And at another location, while officers looked for a suspect at an apartment building, volunteers from the Agape Food Pantry arrived with a food box for one of the residents. Officers kindly took the box and delivered it.

By the time the in-town crew makes it to Umberger Street for an arrest around 10 a.m., Cline figures word is out, which might make the afternoon arrests a little tricky.

“By now, we are all over Facebook,” he said. “They’re saying - y’all keep your head down; the law’s out today - these guys have a network.”

The team makes an arrest at the Travel Lite Motel, then makes a stop on Spring Street before heading to some apartments on South First Street.

Next up is a home on South Fifth Street. Officers arrest the suspect in back of the house, while, on the front porch, his mother mourns. She’s done everything she knows to do; he’s 50 years old, and all she can do now is pray and pray, she tells Cline.

“Just keep on praying,” he tells her.

After nearly a decade of trying various models to make Holston Hills Community Golf Course a successful municipal operation, the town of Marion is opting out. However, officials have worked to ensure the future of the recreational amenity.

The former Smith Jewelers store on Main Street is going through a major renovation with the hopes of landing an upscale restaurant.

The latest inmate set to be put to death as part of the Trump administration's resumption of federal executions was condemned for kidnapping and raping a 16-year-old Texas girl, then bludgeoning her with a shovel before burying her alive.

Fort Chiswell is one step closer to having a library that will be named after community leader and former Wythe County Supervisor Joe Hale.

ABINGDON, Va. — Shoppers will have more opportunities to find unique gifts while supporting local businesses at the Abingdon Farmers Market this year.

Scholarship created in honor of chef killed in March

DAMASCUS, Va. — In just days, an online site has reached more than $2,700 in support of a culinary arts fund in memory of Damascus chef John Seymore.

Law enforcement officers  knock on doors and speak to guests at the OYO Hotel looking for people wanted on drug charges.

While officers looked for a suspect at an apartment building, volunteers from the Agape Food Pantry arrived with a food box for one of the residents. Officers kindly took the box and delivered it.