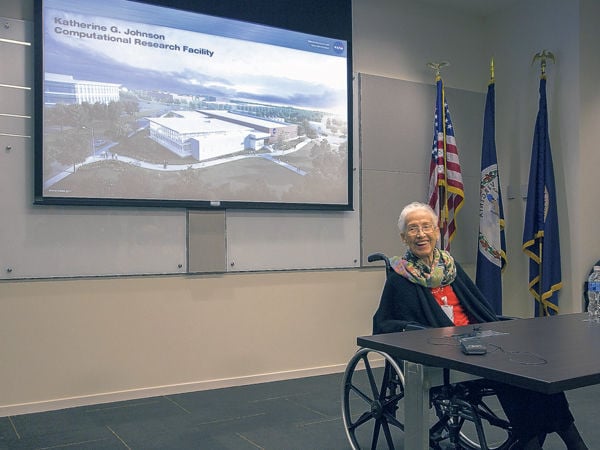 Behind Katherine G. Johnson is an image of the future NASA research center that will bear her name. A naming ceremony for the center was held this spring. 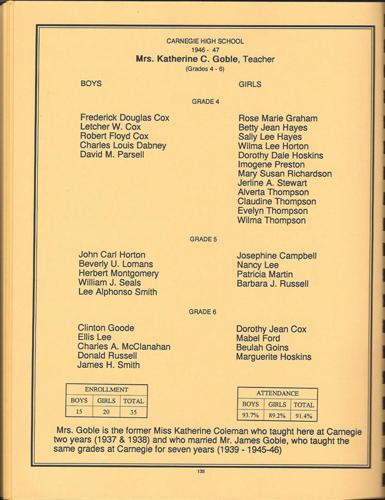 This page of “Evelyn T. Lawrence's Directory of African-American Students and Teachers in all Smyth County Schools 1906-1965” shows one of the classroom rolls for the then Katherine Goble.

As the movie “Hidden Figures” was holding firmly to its number-one ranking among movies for the second consecutive week, Marion officials joined the celebration, recognizing the town’s ties to one of the flick’s main characters.

Soon, town officials hope to travel to Hampton to celebrate the inspiration of Katherine Coleman Goble Johnson to this community and the country by presenting her with a resolution the Marion Town Council unanimously adopted Tuesday evening.

The resolution notes that Johnson, whose work for NASA helped America win the space race to the moon and beyond, began her working life in Marion. Her story and that of other African-American women who helped shape the space race was told by Margot Lee Shetterly in the New York Times bestselling book “Hidden Figures: The American Dream and the Untold Story of the Black Women Mathematicians Who Helped NASA and the United States Win the Space Race.” The book helped shape the screenplay for the movie that was released nationwide Jan. 6.

This woman whose story is the stuff of writers and filmmakers left her home in West Virginia to come to Marion in 1937 to teach at Carnegie High School, the community’s school for black children prior to desegregation. According to “Evelyn T. Lawrence's Directory of African-American Students and Teachers in all Smyth County Schools 1906-1965,” Johnson earned $585 for the entire term teaching fourth, fifth and sixth grade plus high school French and music. She also directed the choir. She taught again the following year and in 1946-47.

The class rolls for the years she taught have been making the rounds on Facebook as people recognize relatives who were Johnson’s students.

Nancy Lee Purefoy of Marion was a student in Johnson’s class when she was in the fifth grade in 1946-47. In an interview earlier this year, she remembered Johnson’s ability to make learning fun.

At the Marion school, Johnson met the man who would become her first husband and the father of her children. Johnson met Smyth County native James Goble, a fellow teacher at Carnegie. They ultimately married and started their family in the Smyth County courthouse town. Their first daughter, Jolette Hylick, was born in Marion and remembers sitting in the balcony of the Lincoln Theatre for shows.

Earlier this year, a media relations specialist for NASA’s Langley Research Center asked Johnson on behalf of the News & Messenger what she remembered about teaching in Marion. Her reply: “Oh, I taught everything. I taught elementary school. I taught some high school classes, and I then trained the choir. One teacher had to do all the work to keep a job…. I did lots of different kinds of jobs.”

And, then she added a personal note:  “And, I met the man I married there. Great town. Great town.”

While teaching and encouraging young people has always remained important to Johnson, now 98 and living in eastern Virginia, her gifts in math served her country.

This past spring, NASA celebrated her work and contributions to its mission by naming a $30 million, 40,000-square-foot Computational Research Facility in her honor.

Johnson’s calculations were so impressive that she was dubbed the “human computer.”

By hand, she calculated the launch window and trajectory of the 1961 flight of Alan Shepard, the first American to go into space.

Clayton Turner, deputy director of NASA’s Langley Research Center, said during the spring ceremony, “The calculations that got him into space and safely home were done by Katherine Johnson.” He noted that she did most of her calculations in her head.

John Glenn so valued Johnson’s calculations that he asked her to verify the computer calculations of his 1962 launch into orbit and the 1969 Apollo 11 trajectory to the moon.

Johnson was part of the team that calculated the launch windows for NASA’s first Project Mercury flights. During the space shuttle program, she also calculated orbital trajectories and was involved in calculations for the International Space Station.

The Marion Town Council resolution notes: “from 1953 through her retirement in 1986, Mrs. Johnson worked as an aerospace technologist, analyzing topics including gust alleviation for aircraft, trajectories, launch windows, and emergency back-up return paths for Project Mercury, from launching the first American in space through the Apollo rockets and the Space Shuttle programs to plans for missions to Mars.”

While Johnson once struggled to get the graduate education she needed because of segregation, she now holds four honorary doctorates and was awarded the Presidential Medal of Freedom in 2015.

The council’s resolution concludes “the Town of Marion joins in celebration of this remarkable career, expresses our most sincere appreciation for all her work and achievements, and wishes Mrs. Katherine Coleman Goble Johnson continued health and happiness.”

Friday afternoon, Marion Mayor David Helms said that the town has been in touch with Hampton Mayor Donnie Tuck to make arrangements to present the resolution to Johnson personally. Mayor Tuck was delighted by Marion’s plans and is in the process of making arrangements with Johnson’s family. In the meantime, Mayor Helms is planning to go see “Hidden Figures” this weekend. The movie is playing in most regional theaters.

Did you know your face is covered in tiny mites?

Apollo lifted out of Versailles' gardens for restoration

Apollo lifted out of Versailles' gardens for restoration

Tom Brady and Stephen Curry under investigation after FTX collapse

Tom Brady and Stephen Curry under investigation after FTX collapse

Why walruses are fed restaurant-quality seafood at zoo in Washington

Why walruses are fed restaurant-quality seafood at zoo in Washington

Behind Katherine G. Johnson is an image of the future NASA research center that will bear her name. A naming ceremony for the center was held this spring.

This page of “Evelyn T. Lawrence's Directory of African-American Students and Teachers in all Smyth County Schools 1906-1965” shows one of the classroom rolls for the then Katherine Goble.