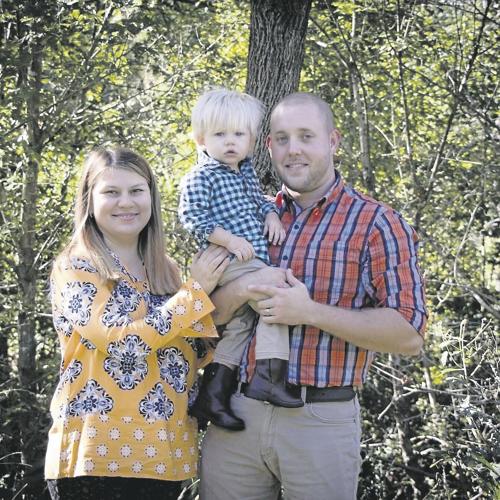 John and Yana Blevins with their son, Collin. 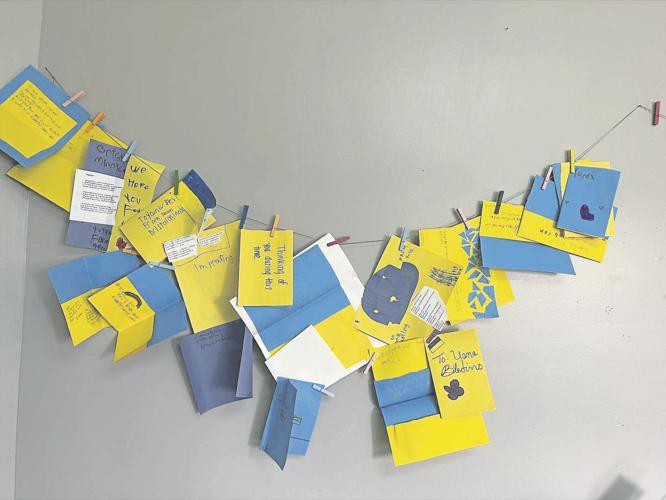 Students at the Minnick Wytheville Adapted School recently made cards for assistant teacher Yana Blevins, who grew up in Russia and has family in Ukraine. 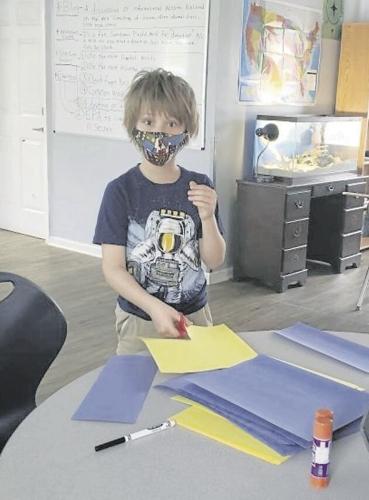 Students at the Minnick Wytheville Adapted School made cards for Blevins in the Ukrainian flag colors of blue and gold.

BY CHRISTINA FEERICK | Special to the Wytheville Enterprise

Special to the Wytheville Enterprise

Ukraine may be thousands of miles away from Wytheville - but it’s as close as a FaceTime call to family struggling to survive a war. Yana Blevins is an assistant teacher at Minnick Wytheville Adapted School who grew up in Russia, traveled to the U.S. as a college student, married a man from Chilhowie, and has settled with her husband and son in Marion.

But Blevins’ extended family remains in Russia and Ukraine – and as the bombings continue, so do her desperate prayers.

“I still can’t believe it’s happening — it’s surreal,” she said. The majority of Russians don’t support the war because they have family ties to Ukraine. Russians and Ukrainians have always been friends. We’re like a big family."

After three years with enCircle, she’s now dedicated to bridging the gap — letting people know the war in Ukraine isn’t "over there" — it’s right here, in our own backyard.

"I check on my family every day to make sure they’re OK. I hate that I can’t do anything about it. I’ve offered to transfer some money, but they say they have enough food (and) their houses are fine,” she said. “But of course, other people are not so fortunate. We’ve been praying a lot. It’s hard, it’s very hard."

While her prayers continue halfway around the world, she is mindful of her own blessings here at home.

"Praise God for another day, for peace, and for everything you have,” Blevins said.

More than 2.5 million people have fled Ukraine, but Blevins’ family has decided to stay put. Her cousin lives in Kharkiv, a city of nearly 1.5 million people in northeast Ukraine, and confides that even though he can hear gunfire and shelling constantly, he’s unwilling to abandon his apartment.

“He’s doing a great job,” she said. “He is helping people, and trying to accommodate them with housing and trying to find a place for them to go where they will still be safe. There has been a lot of destruction in his city; a lot of military bases were destroyed. Some parts of the city are leveled, but he is still able to go out and walk and try to help the community.

"They didn’t believe the intentions of Russia to invade,” she added. “They thought everything was going to be fine and there would be a political solution to the problem. They expect part of the city to be leveled but refuse to leave. They will still hold their ground, no matter what,” Blevins said.

Blevins met her husband, John, while participating in a student exchange program and working at the old Tuscan Italian Grill in Abingdon.

“My husband and I got married in Russia, and as soon as the paperwork was finalized, I moved here permanently eight years ago,” she said. The couple has a 4-year-old son, Collin.

Yana couldn’t agree more and is grateful for the support of her enCircle coworkers and Minnick students, who recently made cards in the colors of the Ukrainian flag – blue and gold – for Blevins.

"I am very blessed,” she said. “Keep thinking about us and praying for us. That’s all you can do. I believe in the power of prayer, that God can handle anything that it will turn for the better."

"As we follow the horrible events unfolding, let's remember that Ukraine is as close to us as Yana, right here in Minnick School Building #10,” Spence said.

“After working and cooperating with the relevant Government agencies, this unannounced raid on my home was not necessary or appropriate,” Trump said in his statement.

The nation’s top public health agency is relaxing its COVID-19 guidelines and dropping the recommendation that Americans quarantine themselves if they come into close contact with an infected person.

Two music legends die, Serena Williams plans her future and the NBA will honor an icon | Hot off the Wire podcast

🎧 Olivia Newton-John and Sam Gooden died. Meanwhile, Serena Williams plans to wrap her tennis career. Listen to those stories and others in this podcast.

Trump calls for 'immediate' release of warrant; Anne Heche 'not expected to survive' crash | Hot off the Wire podcast

Former President Donald Trump is calling for the “immediate” release of the federal warrant. And a spokesperson for Anne Heche says the actor is on life support after a fiery crash. Those stories and more on our daily news podcast.

Republican politicians and candidates are distorting how a major economic bill working its way through Congress would overhaul the IRS and affect taxes for the middle class. The Inflation Reduction Act, which awaits a House vote after passing in the Senate on Sunday, would increase the ranks of the IRS. But it wouldn’t create a mob of armed auditors looking to harass middle-class taxpayers, as some Republicans are claiming. And while experts say corporate tax increases could indirectly burden people in the middle class, any claims that they’ll face higher taxes aren't supported by what’s in the legislation.

Donald Trump says he invoked the Fifth Amendment and wouldn’t answer questions under oath in the long-running New York civil investigation into his business dealings. Trump arrived at New York Attorney General Letitia James’ offices Wednesday morning, but sent out a statement more than an hour later saying he declined to answer the questions under the rights and privileges afforded to every citizen under the United States Constitution.” Anything he said during the deposition could have been used against him in a criminal case, if one ensues. While James’ investigation is civil in nature, the Manhattan district attorney is running a parallel criminal probe.

One dead, 17 hurt in crash during fundraiser for fire victims

Police allege that the driver of the vehicle in the crash later killed a woman in nearby Nescopeck and the county coroner identified her as his 56-year-old mother.

What does 'plead the Fifth' mean? Will Donald Trump do it?

Former President Donald Trump, son Donald Trump Jr. and daughter Ivanka Trump are due soon to face questioning under oath in a civil investigation into their business practices. But will the Trumps answer? The ex-president’s lawyer has indicated that he’ll advise Trump to stay mum and invoke the Fifth Amendment’s protection against self-incrimination. It’s a constitutional right that gets high-profile exposure in settings from Congress to TV crime shows, but there are nuances. The constitution explicitly mentioned the protection in relation to criminal cases, but it's now understood to cover civil matters as well.

The statement comes after days of silence from the Justice Department with regard to the search, as is the department's normal practice for ongoing investigations.

Civilians killed in Russian shelling in Kramatorsk and Zaporizhzhia

John and Yana Blevins with their son, Collin.

Students at the Minnick Wytheville Adapted School recently made cards for assistant teacher Yana Blevins, who grew up in Russia and has family in Ukraine.

Students at the Minnick Wytheville Adapted School made cards for Blevins in the Ukrainian flag colors of blue and gold.