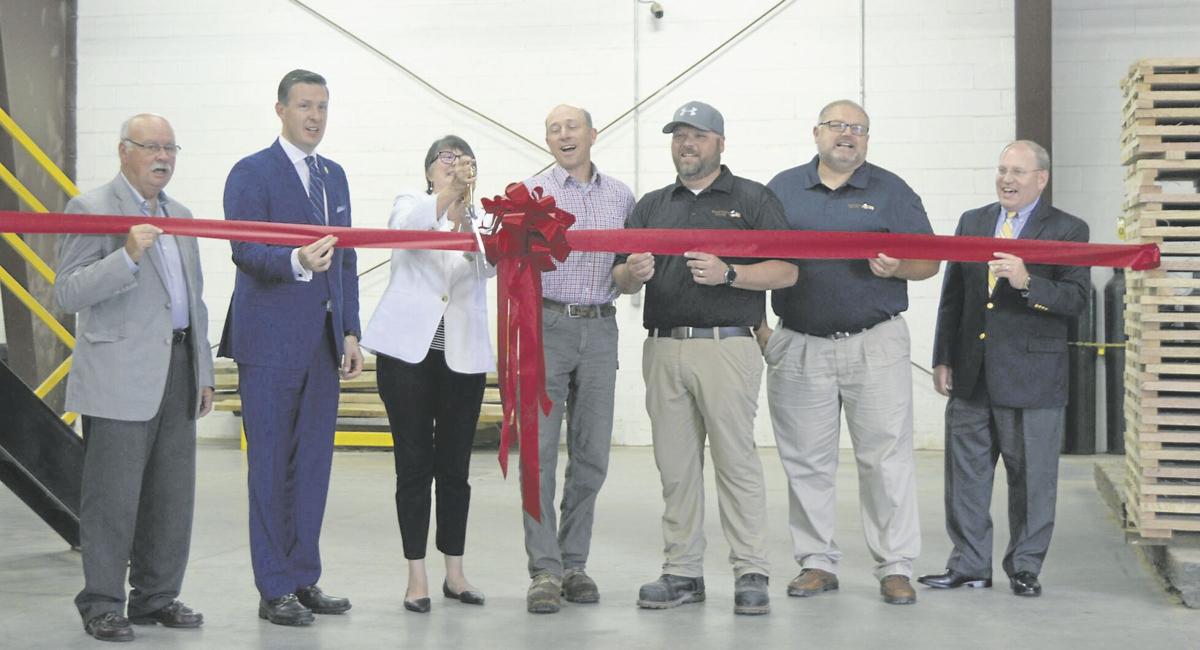 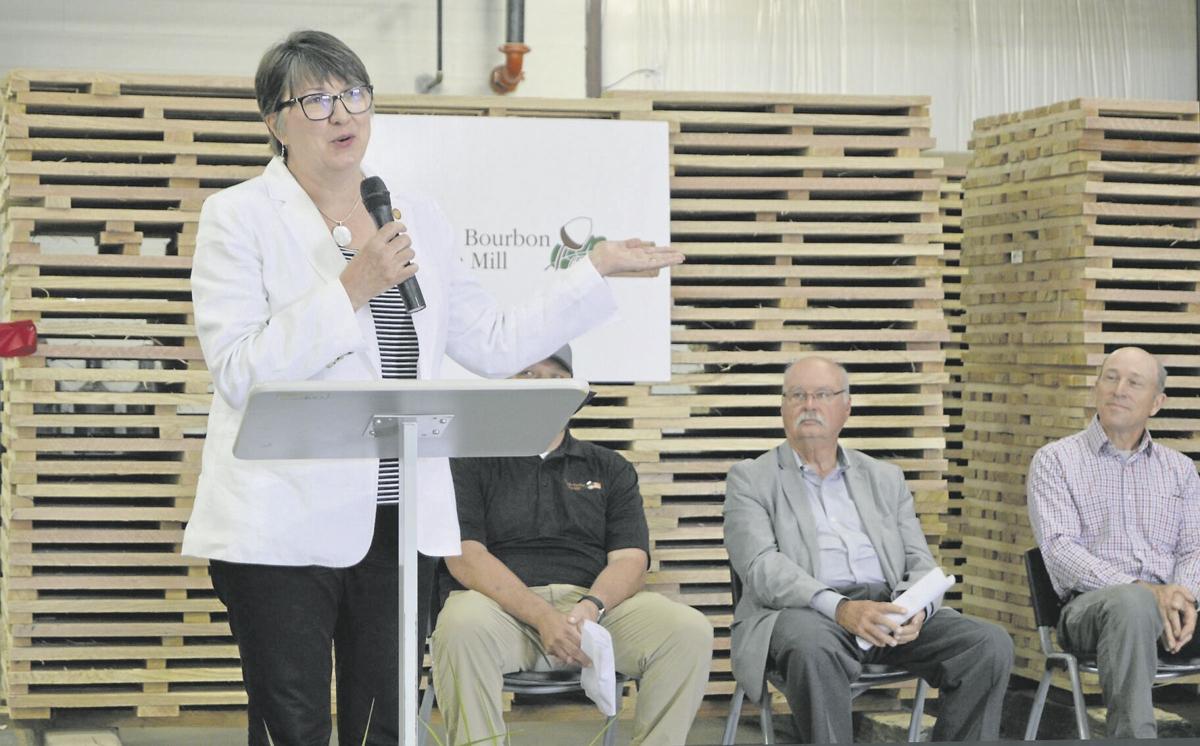 Virginia Secretary of Agriculture and Forestry Bettina Ring congratulates the employees of Speyside Bourbon Stave Mill in Glade Spring on their year of operation. 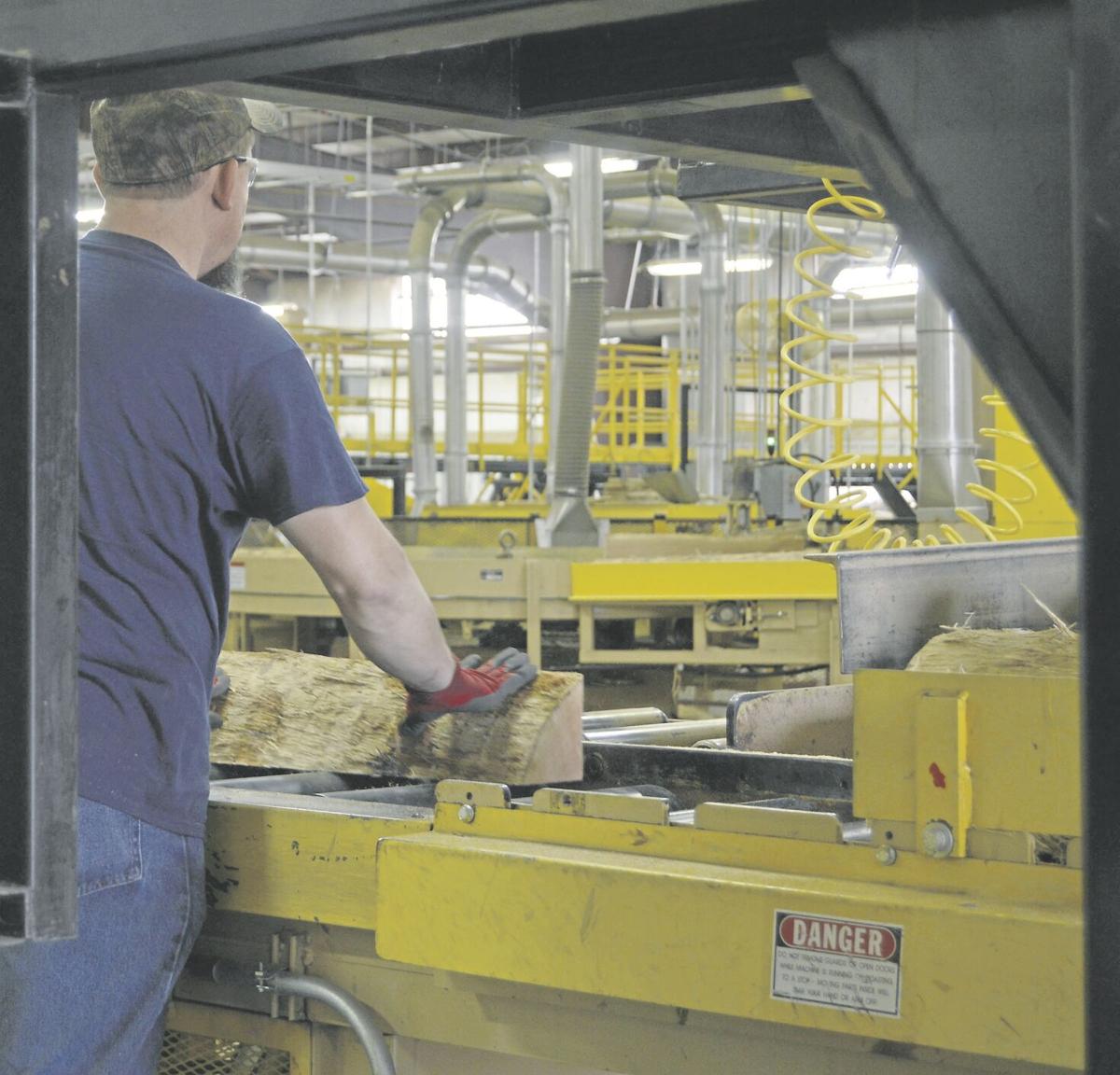 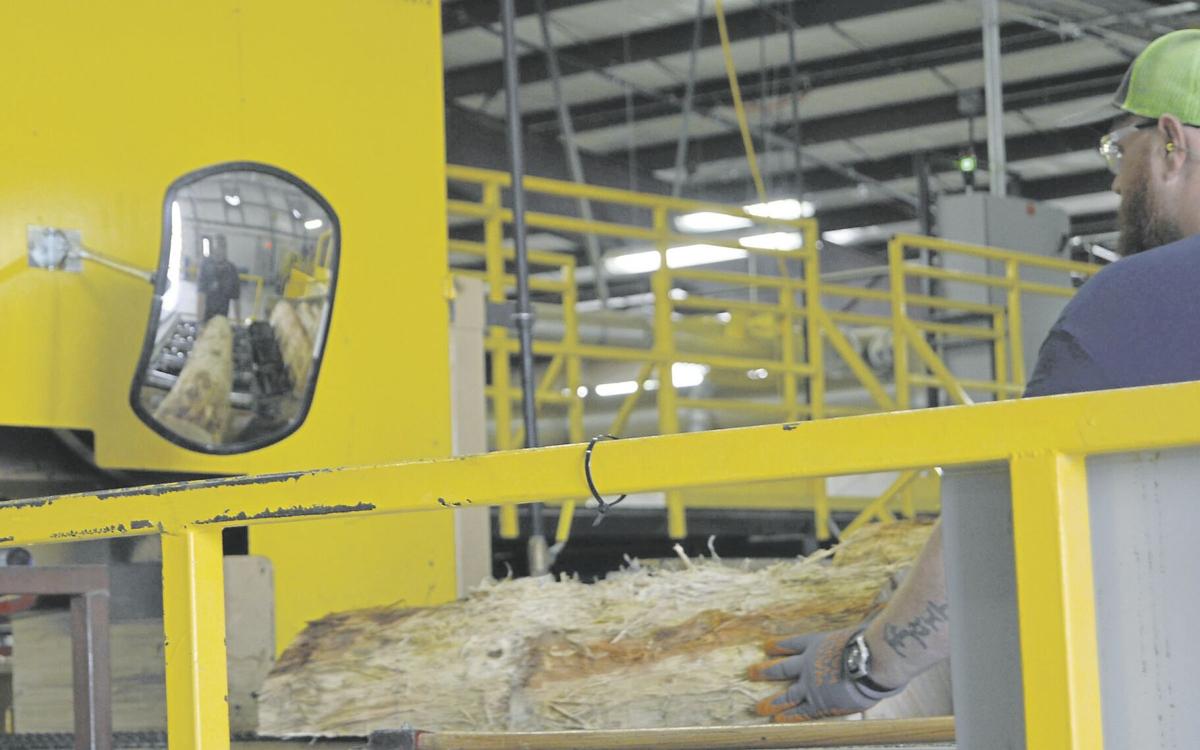 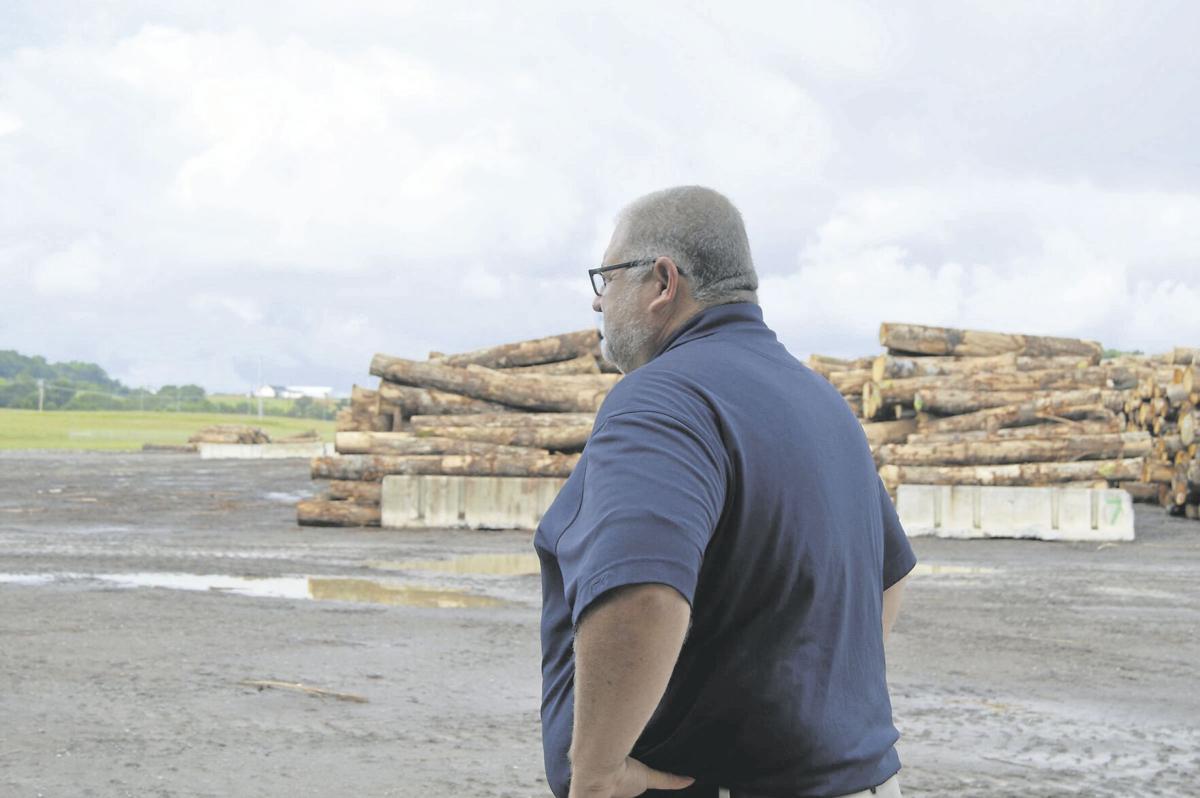 Kendra Hayden began helping work to bring the Speyside Bourbon cooperage and stave mill to Smyth and Washington counties when the project was just a possibility.

After she toured the stave mill, watched employees working on the lines, and helped celebrate its first year plus of operations Thursday, Hayden, Smyth County’s economic development assistant, reflected on seeing a project from prospect to fruition.

After the formal ceremonies, she caught up with other professionals, sitting in the mill’s break room with officials and workers. It has been “cool to watch the process,” she said. “It’s very fulfilling to see all the people who have to cooperate to bring it together.”

Hayden, who continues to work in economic development, said, “It gives you hope for the next one.”

The mill has operated quietly and efficiently in Glade Spring for more than a year – the first of its kind anywhere in the world. Thursday morning, company officials gave state and local officials a look at their proprietary process.

Mill Manager Chris Bailey observed that the company, Speyside Bourbon, “created a new way of making staves” – the necessary wooden side components of bourbon barrels. The state-of-the-art mill in the Highland Business Park produces thousands of staves each day. Once complete, the narrow pieces of wood with a slightly beveled edge are sent up Interstate 81 to Atkins in Smyth County where Speyside’s cooperage transforms them into barrels. The Atkins plant is working toward its goal of producing 800 barrels a day.

Bailey explained that it takes 33 staves to make one barrel. The need for the multiple stacks of white oak logs outside the plant quickly becomes evident – or as Bailey quipped, “So, you see we will busy making staves for a very long time.”

The stave mill opened in March 2020, just a few weeks before the pandemic struck. While the company had to delay its ribbon cutting until yesterday, the plant kept working. “During that time,” Bailey said, “we produced roughly 12,000 staves a day, which allowed us to create the necessary inventory for Atkins to have when they resumed production earlier this year.”

During the pandemic, the Atkins plant did layoff its workers, but Maggie Anderson, who oversees project development for Speyside Bourbon Cooperage Inc., said the layoff was unique for the company. While other companies regularly adjust staffing for the bottom line, she said, anyone who gets a job with Speyside keeps that position.

According to Bailey, the operation has an annual payroll of $1.85 million.

Mill employees gathered for the ribbon cutting and received praise from officials.

Dwayne Ball, Washington County Board of Supervisors’ chair, told them that he knows the work is hard, but “you do a very neat craft here.” Ball, who has a background in forestry, described the mill as a good operation.

Virginia Secretary of Agriculture Bettina Ring praised Speyside for overcoming the challenges of the pandemic. Noting that she previously served as a state forester and that agriculture is the commonwealth’s number-one industry and forestry is number three, Ring said, Speyside’s stave mill and cooperage were “tremendous wins for the region.”

Ring also celebrated that the white oak – the only wood that can be used to make bourbon barrels – is sustainably managed and the company works to protect the environment.

Bailey explained, “We collect the dust and chips (an inevitable byproduct of a sawmill) and sell them to landscapers, to large companies for their biomass programs or to composite furniture makers to be used in the production of their products. We use the remainder of that dust in our own boiler system for heat.”

Though fresh flowers sat at the base of the speaker’s lectern, the white oak served as the event’s perfume. One of the first larger gathering of officials since the number of novel coronavirus cases began to drop in the region, no masks were evident and handshakes were back in fashion.

Highlands Park, a partnership of Smyth and Washington counties, is owned and managed by the Smyth-Washington Industrial Facilities Authority, best known as SWIFA.

Officials from both counties were among those celebrating the occasion.

Randall Blevins, who serves as SWIFA’s vice chair, reflected on the large number of people needed to collaborate to bring the stave mill and cooperage to fruition.

Blevins also took a moment to pitch for future development, saying, “SWIFA is very motivated to develop the rest of the lots in the park.” He went on to ask anyone in the audience representing an industry that might want to expand to see him.

Del. Israel O’Quinn spoke of the rarity of one company impacting two counties so much with one connected project. He pointed to the 160 individuals employed in Atkins and Glade Spring combined.

“I’m grateful Speyside had the foresight to locate here,” the legislator said.

One of those employees, Anthony Denton, of Abingdon, sat in the breakroom on a meal break after the ceremony. This month, he celebrated his first anniversary with the mill.

Denton, who was looking for work, was grateful for the opportunity when he put in an application. He acknowledged that work is fast-paced and challenging, but he smiled and said, “You never get bored.”

Bailey hopes others looking for work will put in their applications. He’d like to get all four lines on the mill floor running and down the road add a shift to the Monday through Friday operation.

After 60 days, Bailey said, employees are awarded full benefits, which includes matching 401K, and the lowest paid are bumped to $14 an hour.

Bailey acknowledged that the work is hard, but he said, “We’re a small company that’s family-oriented. We have a good time, and we treat people right.”

The mill manager added, “You’re a name and you’re a face here, not a number.”

Speyside, which is headquartered in the U.S. in Jackson, Ohio, is relatively new to this country, but it’s a subsidiary of Speyside Cooperage Ltd. in Scotland established in 1947. In 2008 Speyside Cooperage was sold to the Tonnellerie François Frères Group (TFF), a publicly held company founded in 1906 and headquartered in France. TFF has business locations in 85 countries.

The name Speyside comes from the River Spey in Scotland, which runs near where the family built its first operation.

Where does Donald Trump stand now?

On probation last year when he picked up new charges, a Wythe County sex offender was sent to prison on Monday.

A Bristol, Tennessee man faces charges in connection with the death of a 10-month-old child.

A 17-year-old male is facing charges following a Thursday evening fight at Wytheville’s Sonic Drive In. No one was injured in the incident.

Though most will have nothing on the scruff of Saint Nick, law enforcement in Smyth County are growing out their beards in the spirit of Christmas.

Meadowview Elementary collects board games to give to students

More than 500 students at a Washington County, Virginia, elementary school will have board games to put under their Christmas trees this holiday.

Abingdon struck by minor earthquake but no damage reported

ABINGDON, Va. — Adam Woodson woke up to a boom from an earthquake in Washington County, Virginia, Sunday morning.

Three Northeast Tennessee men and one from Southwest Virginia have been charged with seeking illicit sex from minors as a result of a two-day joint undercover operation, the Tennessee Bureau of Investigation announced Monday.

Larry Lee “Chicago” Jones, 48 of Wytheville, was found guilty Wednesday in Wythe County Circuit Court of one count Possession of a Schedule II…

Virginia Secretary of Agriculture and Forestry Bettina Ring congratulates the employees of Speyside Bourbon Stave Mill in Glade Spring on their year of operation.