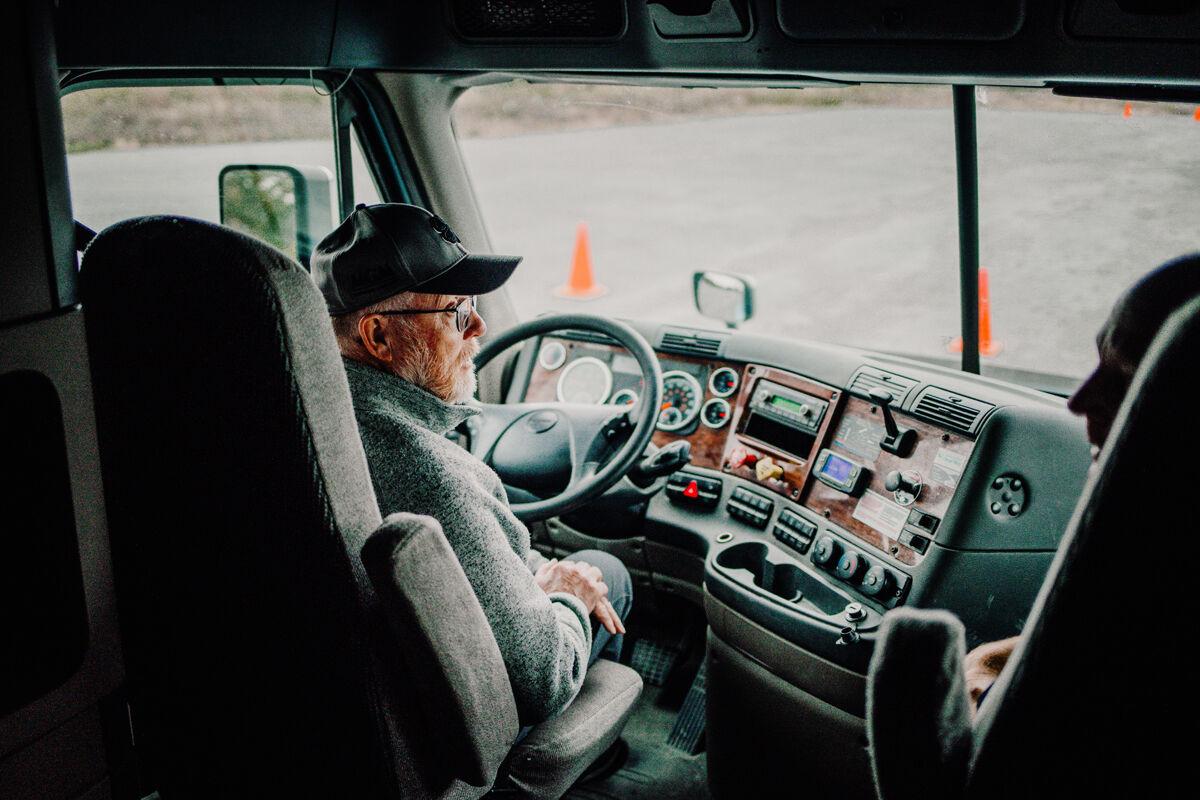 Tony Fitton, a former student at Virginia Highlands Community College, sits behind the wheel of a tractor-trailer while enrolled in a course to receive his Commercial Driver’s License (CDL). 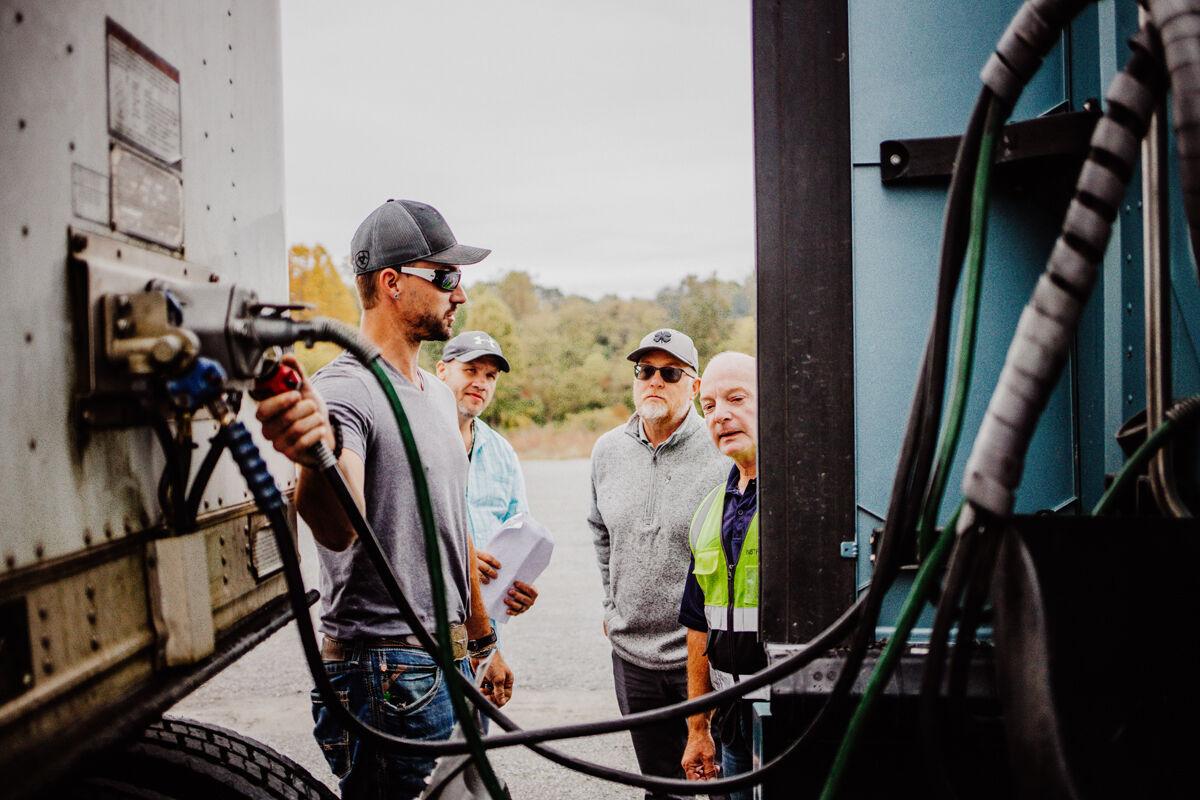 Jason Combs conducts a pre-trip inspection of a tractor-trailer as (from left( Chris Hulse, Tony Fitton and Whit Morison, instructor, watch. Combs was enrolled in a course to receive his Commercial Driver’s License (CDL), offered at Virginia Highlands Community College.

ABINGDON, Va. — With a shortage of truck drivers reaching an all-time high throughout the country, a local community college is seeing an uptick in people who want to get behind the wheel of a big rig.

Whit Morison, a lead instructor for Ancora Education who provides Commercial Driver’s License training at Virginia Highlands Community College, said there is such a large demand for truck drivers right now that most of his students who complete the training are hired immediately.

“I have recruiters calling me wanting to talk to class members. Trucking companies are calling offering jobs,” said Morison.

According to Robert Phillips, dean of workforce training division at the college, the CDL program is not new at the college. It was started in 2016, but the college began partnering with a new company, Ancora Education, just this year. Unlike the previous training provider, the new partnership is offering students the opportunity to take the training course on weekends, an especially important advantage for people with jobs.

For students like Drizzt Johnson, taking classes on the weekend is a bonus.

Johnson is a 19-year-old who graduated from Patrick Henry High School in 2020. As a ground man with New River Electrical in West Virginia, he wanted to get his CDL so that he can become a lineman for the company, a job that will require additional apprenticeships.

According to Phillips, the pandemic can’t be blamed for all of the shortages of truck drivers in the country. He believes the shortages partially stem from many of the baby boomers reaching retirement age.

“Projections indicate that as many as one-fourth of the current trucking force will reach retirement age in the next 10 years,” Phillips said.

“We’ve had companies — even in our region — contact us looking to partner with the college to provide training for some incumbent employees who have an interest in becoming truck drivers.”

Phillips said Virginia residents have a unique opportunity to enroll in CDL courses at the community college with only minimal out-of-pocket expense.

‘Anyone can do it’

Morison reported he’s had a 100% pass rate for students who enroll in the four-week course since he started working at the college this summer.

Johnson may be the youngest student who has completed CDL training with Morison.

“The oldest student is in his early 60s, who just wants to drive a truck. A lady in the class is in her 20s. She wanted a CDL so she could drive for a local truck company,” said Morison.

“Anyone can do it. That’s the cool thing about it. I have some students coming in who have never seen a truck, much less know how to drive one.

“There is no difference in the way men and women learn in the course. Some pick it up quicker than others, but both show the same level of commitment.”

An average starting salary, said Morison, is around $60,000. One of his students went to work for a local distributing company, earning $50,000 for the day job that allows him to go home in the evenings.

“It just depends on what you want,” Morison said.

Morison, a Bristol, Virginia resident, said the trucking industry was a good career choice for him.

He graduated from East Tennessee State University in 2003 with a degree in marketing.

From 2008 to 2016, the self-taught instructor worked as a donor recruiter at Johnston Memorial Hospital, driving the hospital’s blood mobile. Since then, he has driven a passenger bus, a school bus and a local beverage truck before serving the community college as an employee of Ancora Education.

Students spend 40 hours in the classroom learning things they need to know about the trucking industry.

“Our students already have their CDL learner’s permit when they come to class. They have taken the written portion at the DMV,” said Morison.

Students learn the most effective methods for operating, maintaining and managing a truck. Upon successful completion of the program, students test with the Division of Motor Vehicles for their Class A Commercial Driver’s License (CDL-A).

A week of in-class training includes watching videos and PowerPoint lessons. The other 120 hours are spent outside on a practicing range, driving and backing the tractor-trailer truck before hitting the highway.

Students learn how to do a pre-trip inspection, which involves checking under the hood, the lights and other safety checks that ensure the truck is safe to drive.

To learn more about the CDL program at Virginia Highlands Community College, contact Vota Thomas at vthomas@vhcc.edu, or 276-739-2430.

Tony Fitton, a former student at Virginia Highlands Community College, sits behind the wheel of a tractor-trailer while enrolled in a course to receive his Commercial Driver’s License (CDL).

Jason Combs conducts a pre-trip inspection of a tractor-trailer as (from left( Chris Hulse, Tony Fitton and Whit Morison, instructor, watch. Combs was enrolled in a course to receive his Commercial Driver’s License (CDL), offered at Virginia Highlands Community College.