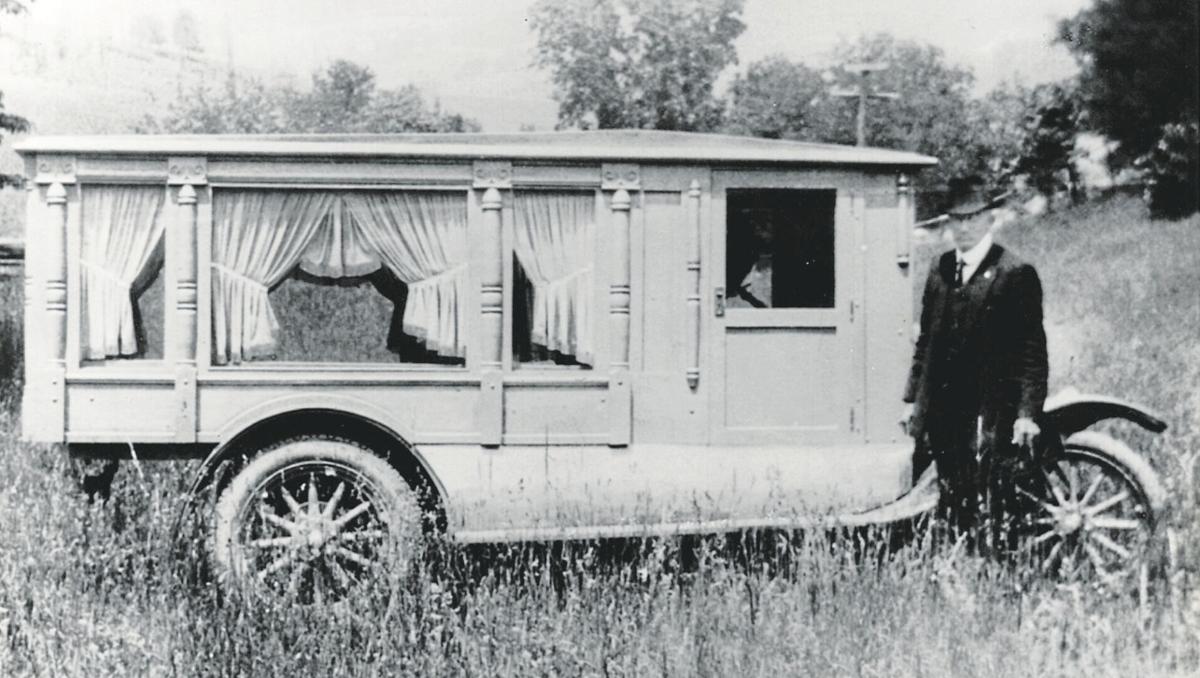 Aurelius Vest standing beside the first motorized hearse owned by A. Vest & Sons Funeral Home. He purchased the 1926 Model T Ford chassis and built the hearse body onto it himself. The funeral home still owns the vehicle, which is housed at the Andrew Johnston House museum in Pearisburg, Virginia. Inside the hearse is the last known casket built by Aurelius Vest that is still above ground. 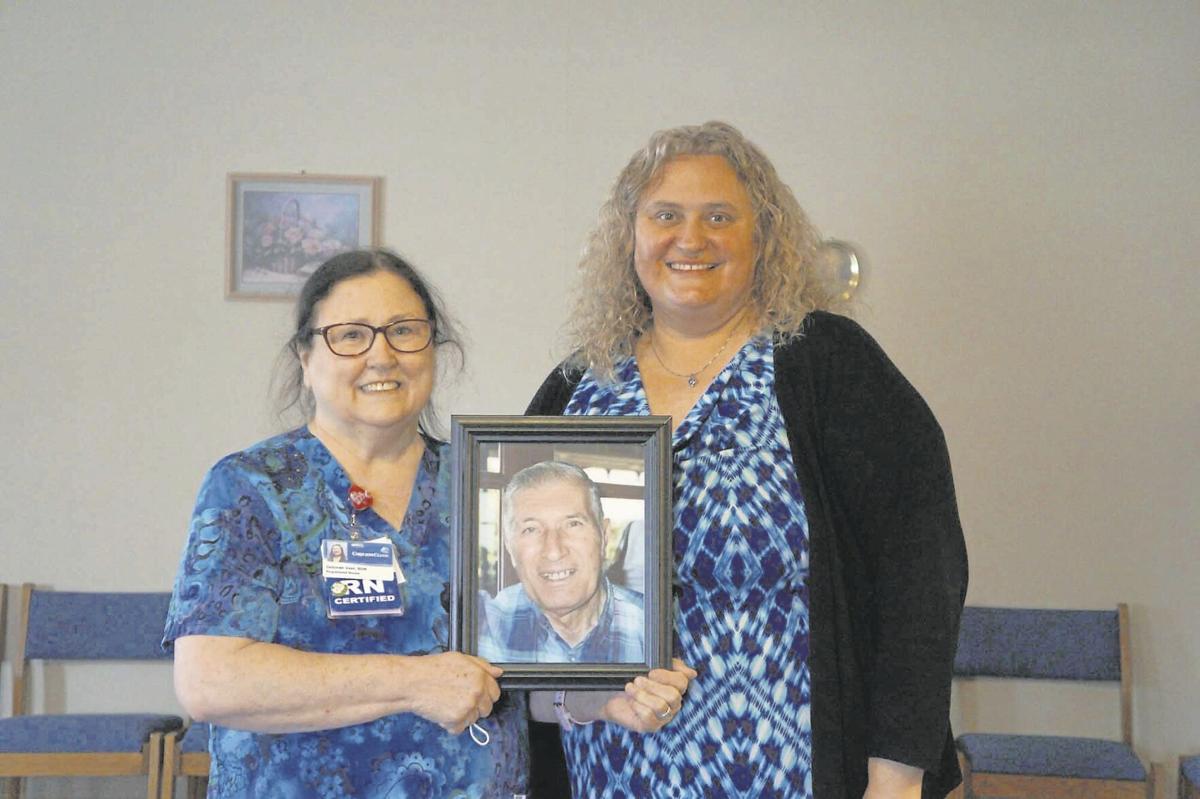 From left: Deborah Vest, the widow of Louis Vest, holds a photo of Louis Vest with Susan Morris on the day Morris purchased the family business. 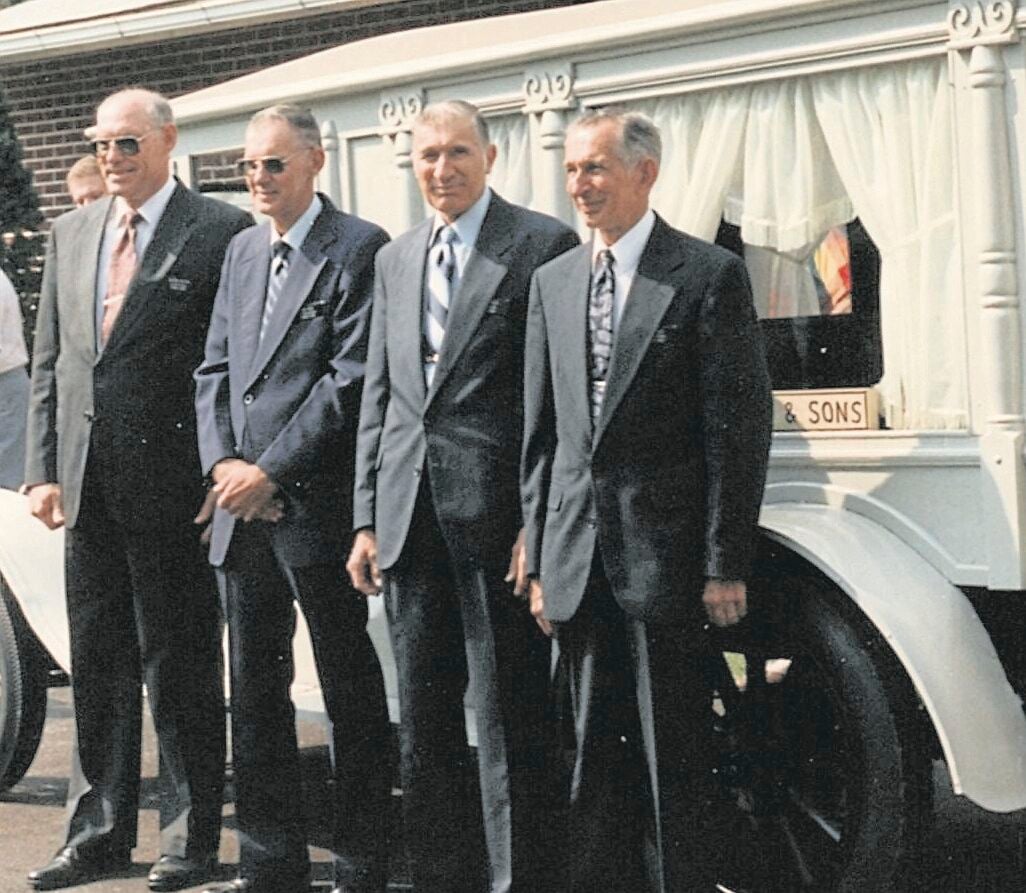 A local funeral home will remain in the family of the man who started the business 125 years ago. Susan McPeak Morris, great-granddaughter of A. Vest & Sons Funeral Home founder Aurelius Vest, recently purchased the family funeral home.

“Our family business is rich in history, compassion and respect. The legacy laid before me is a solid foundation, and I truly look forward to serving this great community for years to come, said Morris, a fourth-generation owner.

Aurelius Vest started the business in 1896. A skilled carpenter, he handcrafted fine furniture. Admirers of his work started asking him to build coffins for family members.

“He would stay up all night long and put together walnut coffins,” Morris said.

An entrepreneur at heart, Vest saw the need for a funeral home in addition to his coffins, and the business was born. His sons, Ed (Morris’ grandfather) and Robert joined their father in the company and worked alongside him until the late 1940s. Aurelius Vest had another son, Clarence, who worked for a Carter-Tharp Funeral Home in Bedford.

Edward’s sons, Louis and Nelson, the third generation of funeral directors, were licensed in 1956. Eight years later, in 1964, Louis bought out his father and uncle and became the third-generation owner. He owned and operated the Pearisburg funeral home until Dec. 31, 2020, when he handed all operations over to Morris, his niece and daughter of Wayne and May Dell Vest McPeak. Morris is the fourth-generation funeral director/owner and first-generation embalmer.

Louis Vest died Jan. 5 of this year after working nearly 65 years as a licensed funeral director. Nelson Vest, 89, still works at the funeral home, as does Morris’ father, Wayne. Other employees include Morris and intern Alyssa Daubenmire. Morris’ husband, Bryan, works there when needed. Susan and Bryan Morris have a daughter, Charlie, and live in the Mechanicsburg community of Bland County.

Morris didn’t always plan to take over the family business. After graduating from Giles High School, she moved to Roanoke. In 2008, she returned to Bland County. Aware that her uncles were aging and the special place the business holds in the community, she started taking classes to become a funeral director.

“I was taking classes here and there, and one day Darrell Mullins, a funeral director in Radford, told me, ‘you are wasting your time, go to Pittsburg, smell the formaldehyde, then get back and run that business.’ So, that’s what I did.”

Morris said a good funeral home director has compassion and respect for the families he or she serves.

“We serve some of the greatest people on earth – families, friends and church families,” she said. “We get to help the people who mean the most to us during the hardest time of their lives and make their lives a bit easier. It’s just rewarding work.”

The same reason that the work is rewarding is also why it’s challenging, according to Morris.

“It’s taxing emotionally,” she said. “These are people I know personally; it’s sort of a double-edged sword.”

At a time when many funeral homes are selling out to big corporations, Morris is proud that A. Vest & Sons remains family owned.

“This place is very special not just to our family, but to the people who allow us to serve them,” Morris said. “There is a long legacy in the business and I’m proud to be part of it and hope to keep it going for a really, really long time.”

Tony and Crystal Holston’s staircase is a testament to daughter Cheyenne Holston’s love for her family and her family’s love of books. The 17-…

Let me begin by acknowledging that I am lucky. I had a severe case of Covid and am on the mend. Others have not been as fortunate. I have fami…

An area man was injured on Monday morning after jumping from a Bland County bridge in an apparent suicide attempt.

Aurelius Vest standing beside the first motorized hearse owned by A. Vest & Sons Funeral Home. He purchased the 1926 Model T Ford chassis and built the hearse body onto it himself. The funeral home still owns the vehicle, which is housed at the Andrew Johnston House museum in Pearisburg, Virginia. Inside the hearse is the last known casket built by Aurelius Vest that is still above ground.

From left: Deborah Vest, the widow of Louis Vest, holds a photo of Louis Vest with Susan Morris on the day Morris purchased the family business.