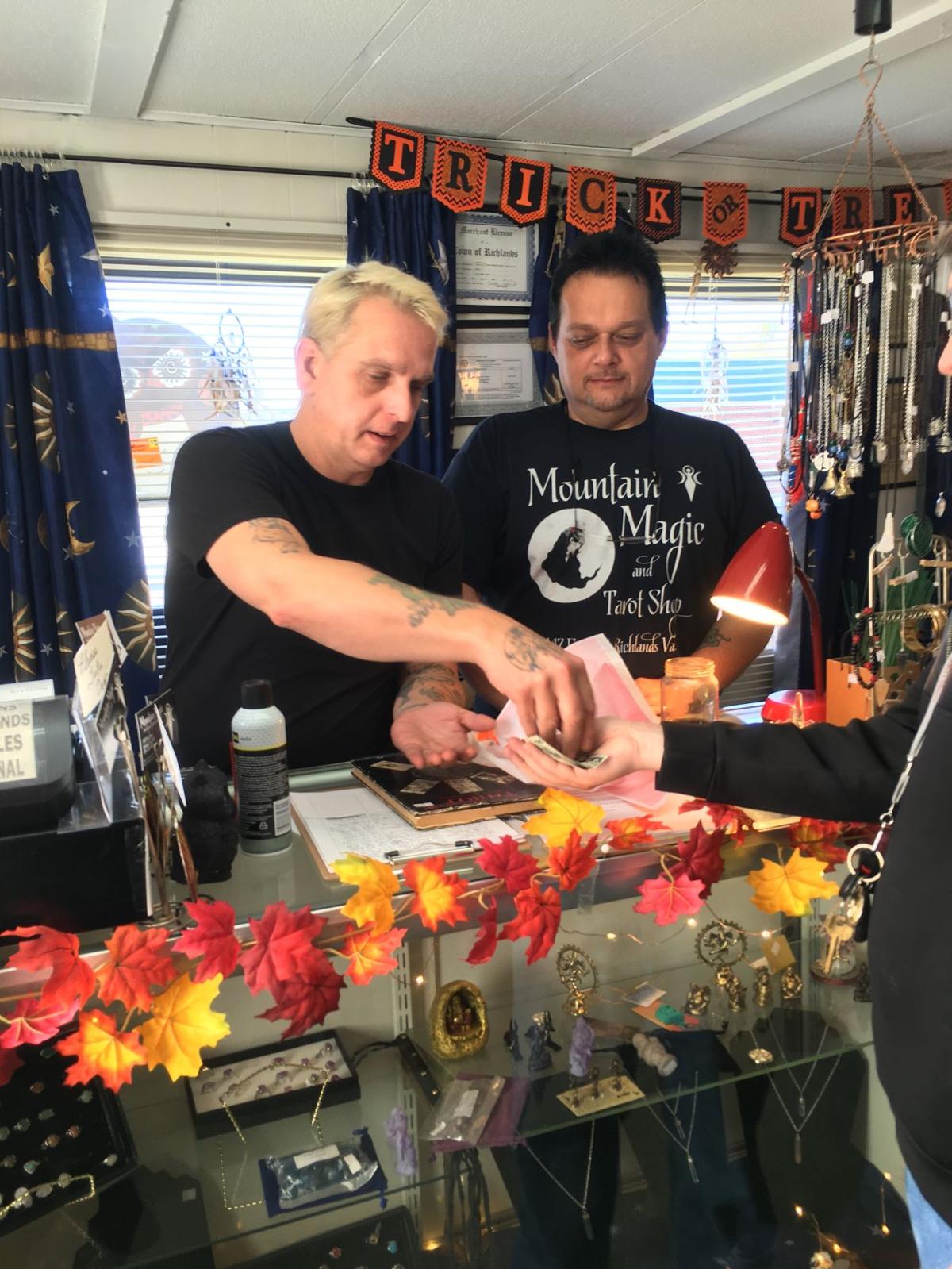 Shop owners Mark Mullins (left) and Jerome Vandyke (right) said that while they believe the apparent ban affects their business, they still have a steady stream of customers. 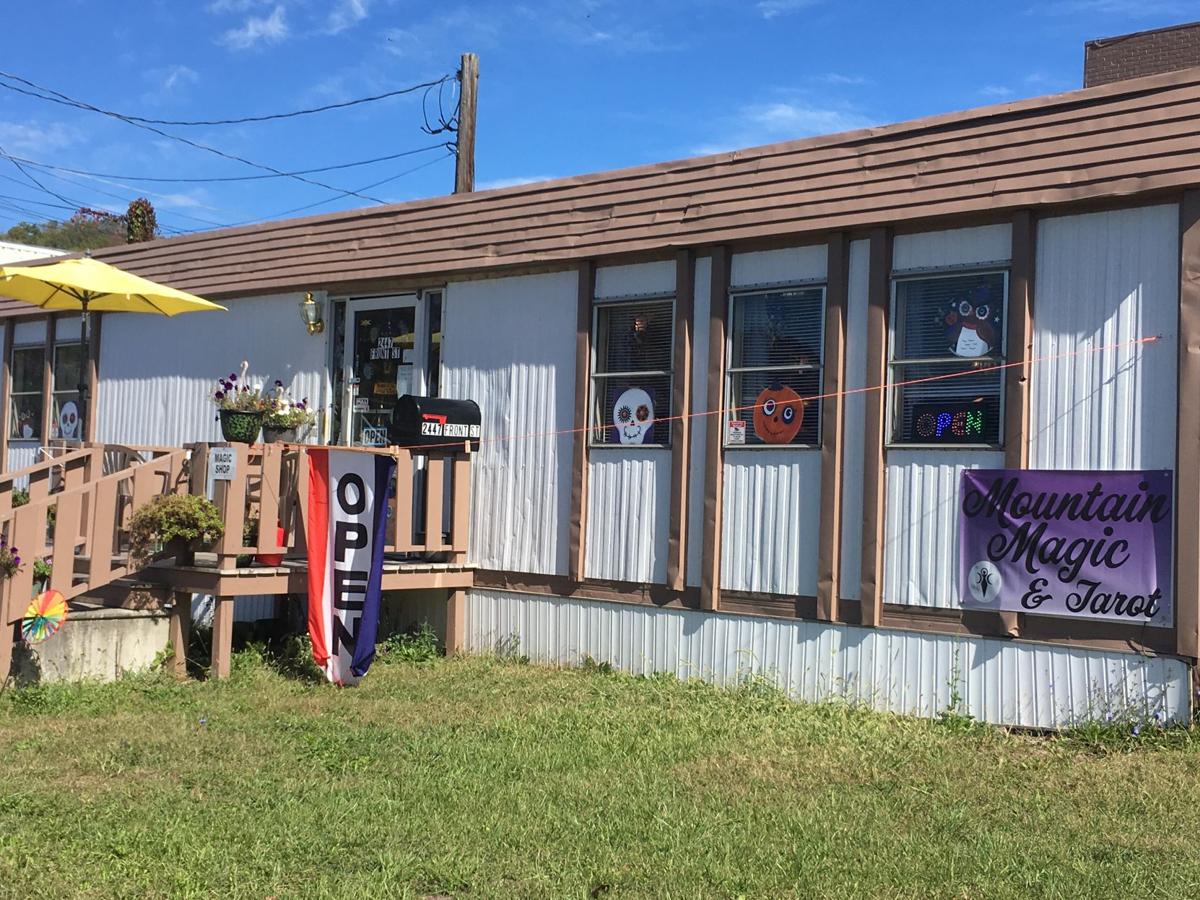 Mountain Magic owners vow to fight what seems to be a ban on tarot card readings.

Richlands occult shop owners Mark Mullins and Jerome Vandyke hope to fight what appears to be a ban on tarot card readings in Richlands after police ordered them to stop reading cards for the public earlier this month.

Mullins and Vandyke said that when they opened their book and gift shop, Mountain Magic, in July, they were told they couldn’t charge for readings. So the two decided to do them for free. Then, in early October, police told the owners that they were in violation of the town’s zoning ordinance simply by performing the readings.

“Every time I do [a reading], it’s because someone asked me to. I’ve never done it for someone who didn’t ask,” Mullins said. “I’m basically offering people advice. How can you tell someone they can’t offer advice?”

Mullins, who says he is a pagan, equated the restraint to ordering a Christian business owner not to pray with their customers.

“For me, the tarot deck is my Bible. I’ve been reading tarot for 30 years. When they take away my Bible, I have no way to offer people advice."

Town Manager Tim Taylor said that because current zoning ordinances do not expressly permit a business owner to read tarot cards for their customers, it is prohibited.

“The laws are generally written to tell you what you can do. They don’t leave any room for guessing,” Taylor said.

He explained that although Mullins performs the readings for free, it is still deemed part of his business because the readings are performed in his place of business.

“We’re not in the business of what you charge people; it’s the activity of what you’re doing,” Taylor said. “Right now, that type of activity is not allowed as a business. But that doesn’t mean you can’t add it."

Mullins argues that when he applied for his business license, fortune telling and palimistry were among the examples used under the nature of business category.

“How can you offer something you don’t allow,” he said.

“That’s like posting a help wanted sign, interviewing and hiring someone, and then saying ‘we don’t have a position open here,’” Vandyke added.

Mullins and Vandyke had planned to attend the Oct. 10 Richlands town council meeting but decided against it at the last minute.

Opponents of the shop did attend the meeting though, with several speaking out, citing the shop’s merchandise, its proximity to nearby churches and “satanic stuff” as causes for concern.

Vicky Ward, Norma Mabe, Sheila Stanley and Paul Vandyke all expressed concern that items such as tarot cards, pentagrams and other products go against Biblical principles.

Stanley, pastor of Open Window Whorship Center, said the shop should not be allowed to be located so close to churches, noting that the shop is just a stone’s throw away from her church.

But Mullins and Vandyke said their beliefs are simply misunderstood. They said they feel like the whole ordeal is a personal attack on them and on their religion.

“They said we were calling up the devil [but] we gathered on the full moon and prayed for those affected by the hurricane,” Mullins said.

“What this really seems to be about is, I feel, they really want to close us down,” Vandyke said, noting that people have taped things on the store’s sign and yelled slurs at the business owners.

Mullins said the ban on readings could hurt sales.

“It brought people into the store to get a free reading– just like any business that offers something free— and while they waited their turn, they shopped around the store,” Mullins said, adding that customers would sometimes come back days after their readings to purchase their own tarot decks.

Mullins and Jerome Vandyke plan to petition the planning commission and town council to add the tarot practice to the list of permitted uses.

Taylor explained that a similar instance in which a practice was not permitted cropped up with a tattoo parlor in 2014. The owners petitioned the planning commission to add tattoo parlors to the list of permitted uses before they opened up shop.

“A few years ago, we didn’t have any tattoo parlors. He made a request and went through the process and it got added,” Taylor said.

While resident signatures are not required to petition for an addition to the town’s permitted uses, Mullins and Vandyke said they want to prove to the commission that there’s an interest.

“We thought if we got a petition showing that people are interested, maybe they will open it up,” Vandyke explained. “One man can’t speak for everyone, so I’m getting signatures to prove people want it.”

On Tuesday, the petition had about 400 signatures.

Despite some, now high profile, outrage, the two said they’ve made quite a few new Christian friends this month.

Baptist Bobby Goodman started out as a customer when Mountain Magic opened. He now frequents the shop just to chat.

“It’s no different than any of the other religions,” Goodman said “Everybody has a different way of worshipping their god or goddess.”

A shop owner in neighboring Smyth County went through a similar battle in June. Before the shop’s Labor Day opening, members of a downtown church recorded a video on Main Street, condemning the planned shop as “a danger to the community.”

Tavane Taylor, who opened Eclectic by Nature, said that community members in Marion rallied to her side, however.

Mullins and Vandyke said they plan to petition the planning commission soon, but they want to gather more signatures first. They said they are unsure if they will attend the next town hall meeting.

“We’ll have to consult the tarot,” Mullins said.

Jasmine Dent Franks can be reached at jfranks@wythenews.com

Correction: Eclectic by Nature does not offer tarot readings at its Marion location. This story has been edited to reflect this information.

Communities in Louisiana come together after disaster

Concerns about a local business brought a large crowd to the Rich­lands town council meeting on Oct. 10.

Shop owners Mark Mullins (left) and Jerome Vandyke (right) said that while they believe the apparent ban affects their business, they still have a steady stream of customers.

Mountain Magic owners vow to fight what seems to be a ban on tarot card readings.