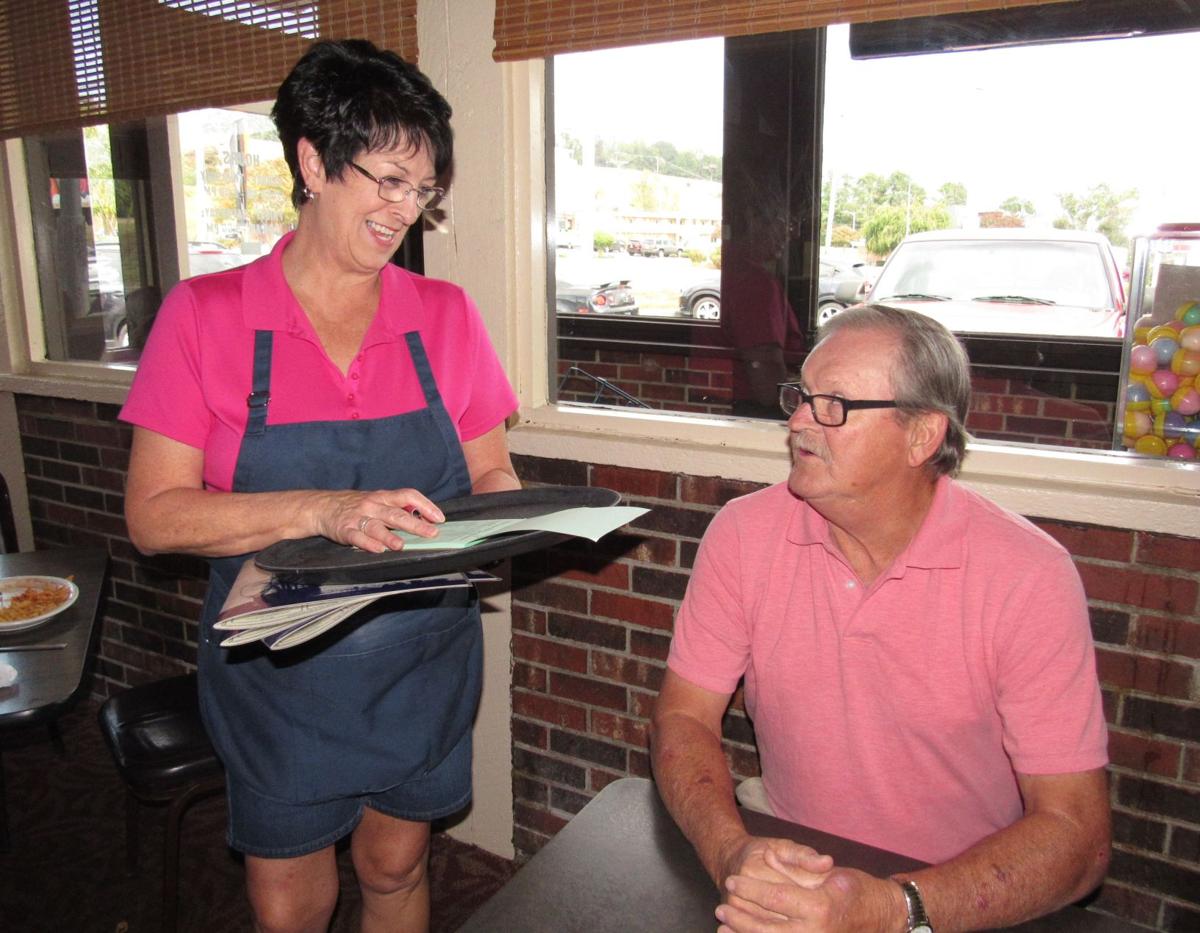 Teresa McCracken, a longtime server at Harbor House Seafood and Steak Restaurant, takes the order for customer Bill Branson of Saltville, Virginia. “I’ve always had good service here. I sure will miss this place,” said Branson. 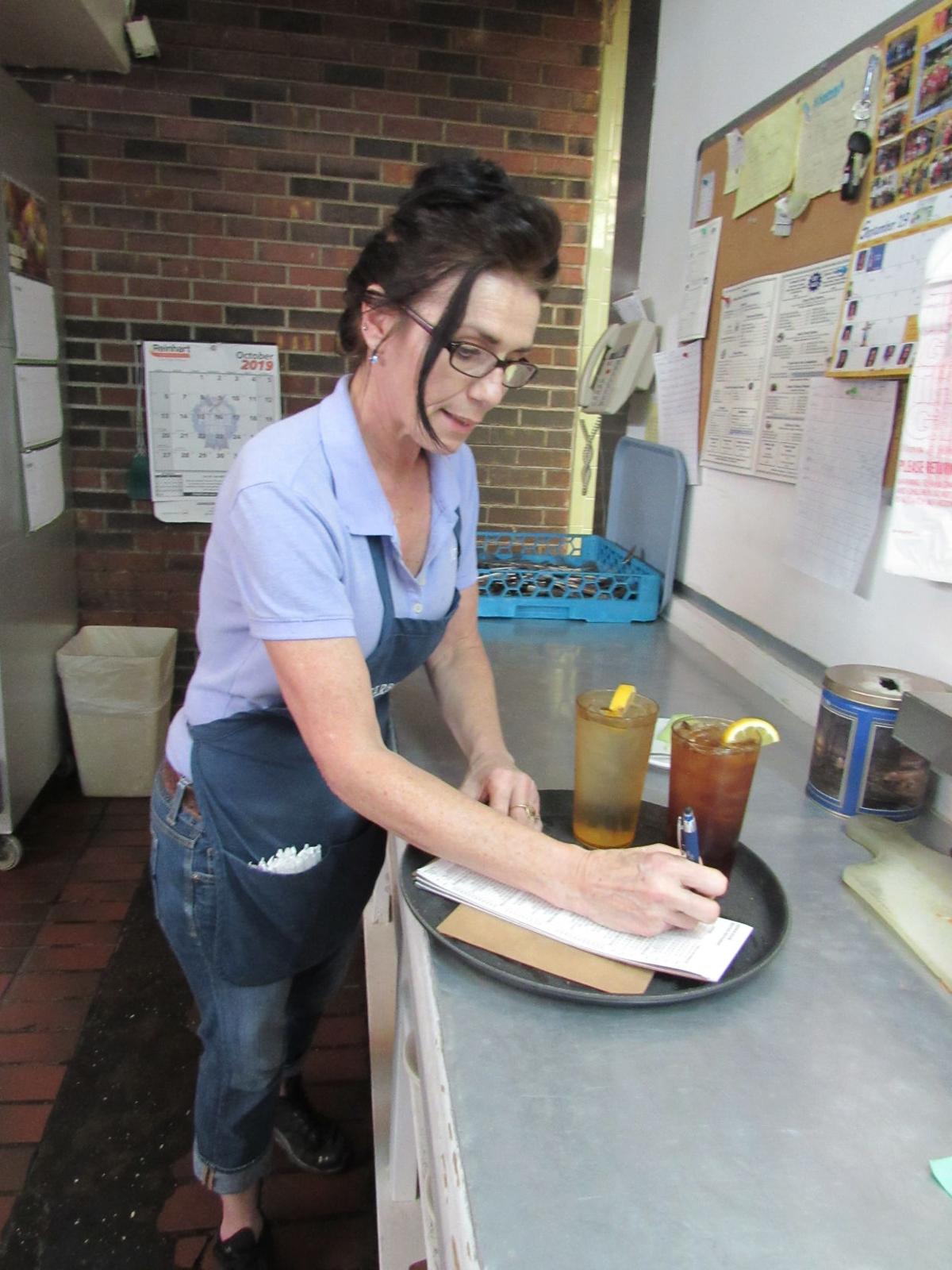 Melissa Owens prepares a tray in the kitchen at Harbor House. After working at the seafood restaurant for nine years, Owens said the employees and regular customers are just like family to her. 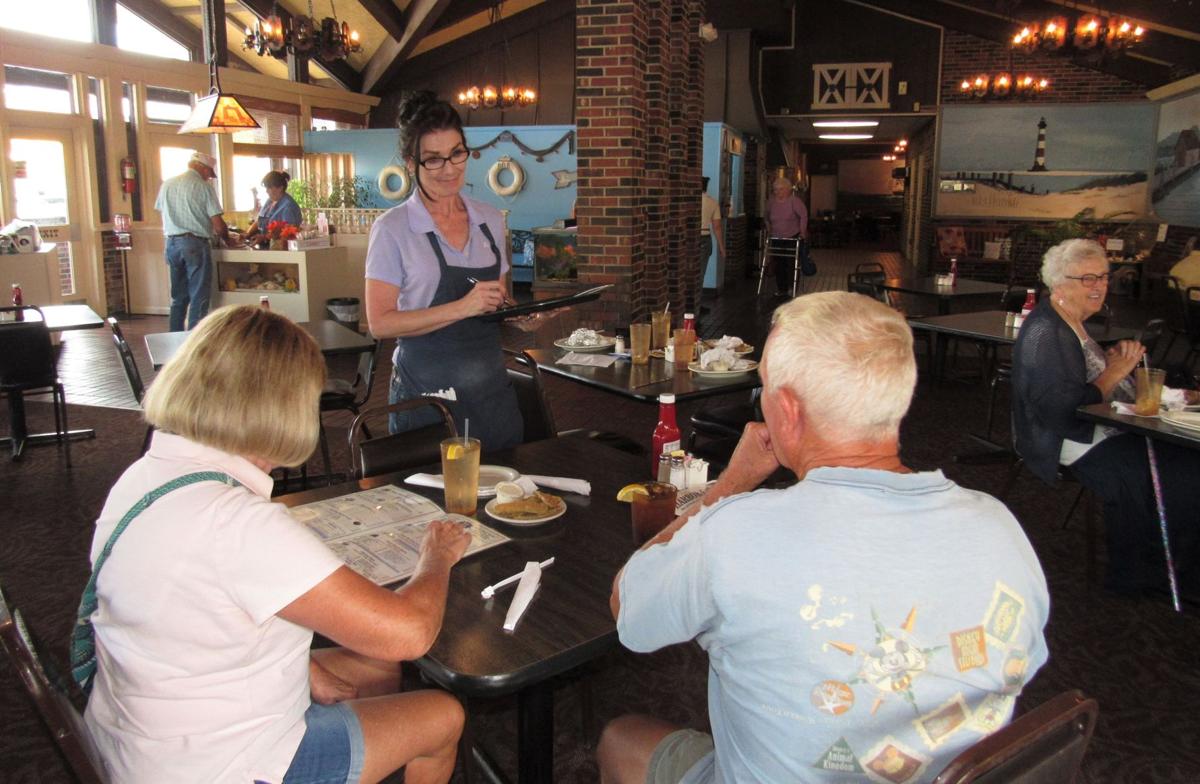 Melissa Owens, a server at Harbor House, talks to customers Jerry and Brenda Umbarger of Atkins, Virginia. The couple said they drove to Abingdon after a day trip to Boone, North Carolina, just to eat at the seafood restaurant.

Teresa McCracken, a longtime server at Harbor House Seafood and Steak Restaurant, takes the order for customer Bill Branson of Saltville, Virginia. “I’ve always had good service here. I sure will miss this place,” said Branson.

Melissa Owens prepares a tray in the kitchen at Harbor House. After working at the seafood restaurant for nine years, Owens said the employees and regular customers are just like family to her.

Melissa Owens, a server at Harbor House, talks to customers Jerry and Brenda Umbarger of Atkins, Virginia. The couple said they drove to Abingdon after a day trip to Boone, North Carolina, just to eat at the seafood restaurant.

ABINGDON, Va. — Teresa McCracken said she’s had little time to grieve over the closing of Harbor House Seafood and Steak Restaurant in Abingdon, her workplace since the restaurant opened 28 years ago.

Ever since word spread through town that the fish house was closing its doors at the end of the month, faithful customers have flocked to enjoy one more meal.

McCracken, a longtime server, and other staff at the restaurant have been called in to work on their days off to help manage an overwhelming number of customers, even on weekdays when business is usually slower.

“We never dreamed it would be like this. We’ve been here nearly three decades, and we’re doing more business now than we’ve ever done,” said Allen Hashbarger, owner of the business. “The outpouring of support has been overwhelming to us.”

Hashbarger has leased the building for 28 years from Bran-Bowie Investments in Bristol, Tennessee, with the option to purchase it, but a spiraling economy throughout the years never allowed him to take that option.

Now, the building is being sold, and the beloved restaurant that’s attracted many families in town for years will close its doors at 8 p.m. on Sunday, Oct. 27.

Jamie Arnold and Ovene Sloan, both of Whitetop, Virginia, didn’t know about the closing until they arrived in town one day last week. “We try to visit the restaurant every month. This is where we had our first date in 2006,” said Sloan.

Douglas Lester of Honaker, Virginia, has been coming with family and friends to eat for years. “We’ll miss it,” said Lester.

Coming to work the past few days has been like an emotional roller coaster for the employees.

“There have been a lot of tears and hugs. In a way, I feel like someone has passed. It just doesn’t seem real,” said McCracken, who has worked at the establishment since 1990 when it was first named Mayflower Seafood by a previous operator.

The server stayed on board with the restaurant when Hashbarger took over the business a year later, eventually changing the name to Harbor House Seafood and Steak Restaurant.

“I’m only as successful as the people who have been working for me all these years,” said the owner. “They see the public every day. It’s been these employees who have brought our customers back continuously.”

Melissa Owens has worked nearly nine years as a server at the restaurant. “We’re like family here. The closing has been very upsetting,” she said.

Tracy Garrett, 33, started working at the restaurant when she was 18. “That’s a lot of my life.”

Despite the ups and downs in the business world, the restaurant has weathered storms and remained open throughout the years.

“Business is good now, which, I think, makes the closing even harder to accept,” said McCracken.

“We were holding our own in the late 1990s until Walmart opened at Exit 7 in Bristol and all of the restaurants opened at that location. It really hurt us. For about three years, it was touch and go.

“We almost have made a full recovery since Walmart recently came to Exit 19 in Abingdon. But I knew the property had been for sale for a good while. It was only a matter of time when things would change on this end of town.”

Service with a smile

“It’s been so much more than a job,” said the server. “I never did decide what I wanted to be when I grew up. This job has been more like play,” she said with laughter.

“But don’t get me wrong. The job of a server is hard work, especially when dealing with not-so-pleasant customers.

“It can be physically demanding, too.”

McCracken said restaurant servers often wear an invisible mask that never reveals the pain from a back that aches or feet that need to take a rest.

“You have to wear that mask all day even when you don’t feel good or you’re going through bad stuff in your personal life. Basically, it’s like run, run, run all day, which I like. I’d rather be busy than bored at work.”

McCracken has no idea how many steps she makes during a shift. “But, let’s put it this way,” she said, “my foot doctor told me I need a new pair of shoes every three months.”

A heart for her work

The server has always exhibited a “heart” for her work and for the people who have become like her family. She recently was awarded best server in the Best of Washington County awards.

After one of her elderly customers died, McCracken was faced with serving the family at the restaurant after the funeral services were held.

“I expressed my sympathies before they started to order, then I just lost it. No matter how hard I tried, I couldn’t hold back the tears. I had to walk away and come back.”

Building relationships has also been an important ingredient in her work.

“I held myself together pretty good when Allen first told us about the closing, until he mentioned our customers.”

McCracken said the hardest part of closing has been telling the customers, many of whom she’s served for decades.

“I know I’m going to miss the people I work with and the customers I serve. And I feel very fortunate to have worked for Allen all these years. He’s been such a good employer,” she said.

“I’ve made so many friends working here. I’ve seen young parents carrying their babies into the restaurant. Now, I’m seeing those grown children carrying their kids in.”

McCracken isn’t sure where her path will lead her next.

“I don’t know if anything will ever feel like home again.”