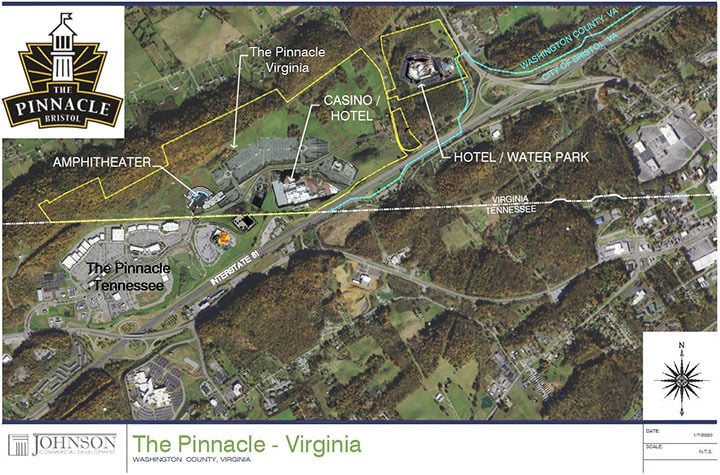 BRISTOL, Va. — Developer Steve Johnson and a federally recognized Cherokee tribe announced an agreement last week to establish a proposed casino in Washington County, Virginia, just one day before the General Assembly convenes for a session that could see the state legalize casino gaming.

The new casino proposal raises questions about whether longstanding plans for a casino at the former Bristol Mall site will face competition and how the dueling casino proposals may ultimately play out.

Under the announced agreement, the Eastern Band of Cherokee Indians [EBCI] would develop and operate a casino on part of a 350-acre tract owned by Johnson adjacent to The Pinnacle, a retail complex he developed across the state border in Bristol, Tennessee.

“I have visited the site along I-81 and I am impressed with its strategic, gateway location that serves a five-state area,” Richard Sneed, chief of the EBCI, said in a news release about the new proposal. “It is our wish to bring new tax revenue and jobs to Washington County and the Southwest Virginia region in a positive and impactful way.”

The tribe is known for its Harrah’s Cherokee Resort Hotel and Casino in Cherokee, North Carolina.

In addition to a proposed casino and luxury hotel, development on the Virginia side of the border would include a 15,000-seat outdoor concert venue, recreational facilities and a hotel with an indoor water park, the release states.

But this isn’t the only casino project in the works for the Bristol area — local businessmen Jim McGlothlin and Clyde Stacy have proposed opening a Hard Rock Bristol Resort and Casino in the former Bristol Mall, located within the city limits of Bristol, Virginia.

The Bristol casino group issued a statement Tuesday evening saying they have worked for 16 months with state and local leaders to complete the project, “as a catalyst to boost our local economy in Bristol and Southwest Virginia. We understand, first-hand, what these jobs mean to our community.”

Bristol is one of five cities across Virginia that state leaders have considered for legal casino sites. A Joint Legislative Audit and Review Commission study released in late November showed a casino in Bristol could prove financially viable and generate more than 1,000 direct jobs and $130 million in annual revenue.

The study did not consider a casino in Washington County, however, and it remains to be seen whether Virginia would license a casino outside of the Bristol city limits.

“There is an old saying that imitation is the sincerest form of flattery,” Eads said during a news conference the same day. “And the city appreciates Mr. Johnson recognizing the tremendous effort we have made as a city to revitalize the old Bristol Mall and bring true economic development opportunities to Southwest Virginia by imitating our initiative to bring a resort casino to Bristol, Virginia.”

A casino just across the border in Washington County was not authorized by the General Assembly or studied by JLARC, Eads said.

“It’s not even a feasible thing to consider right now,” he said.

“That JLARC study came back and said several things of importance, but one of which is that regional competition is vital to identifying the best projects, and we agree with that,” said Greg Habeeb, a partner at Gentry Locke in Richmond, which was retained for the project by the EBCI. Habeeb is also a former member of the Virginia House of Delegates.

It’s unclear whether a competitive process would include casino operators outside of the studied cities.

For his part, Johnson said that he thinks his potential casino site makes the most sense for Southwest Virginia, citing its location along Interstate 81 and at interchanges between I-81 and U.S. Highway 11W and Gate City Highway.

Asked about tensions over whether a competitive bidding process could extend across locality borders, Johnson said the General Assembly will decide the matter.

It would not be the first time Johnson has been in competition with Bristol, Virginia. His development, The Pinnacle, and The Falls, the retail/dining complex developed just miles away by the city of Bristol, Virginia, were announced days apart in 2012. For years, the developments have competed for tenants, though The Pinnacle has been more successful.

Johnson said he had been in talks with the Eastern Band of Cherokee Indians about the casino project in recent years but declined to provide more specifics.

EXPLAINER: What's the impact of a Russian debt default?

Russia has defaulted on foreign debt for the first time since the Bolshevik Revolution more than a century ago, further alienating the country from the global financial system amid its war in Ukraine. Moscow owed $100 million in interest on two bonds that was originally due May 27. A 30-day grace period expired Sunday, and rating agency company Moody's on Monday declared the country to be in default. The U.S. ended Russia’s ability to pay international investors through American banks. Russia says it has the money to pay but Western sanctions created “artificial obstacles” by freezing its foreign currency reserves held abroad.

A U.S. Supreme Court ruling striking down a New York gun law could mean big changes thousands of miles away in Hawaii, which has strict restrictions on carrying firearms. In 2020, Hawaii had the nation’s lowest rate for gun deaths. Chris Marvin is a Hawaii resident with the gun control group Everytown for Gun Safety. He's concerned minor scuffles over things like surf spots could escalate if more people are carrying guns in public because of the high court decision. As Marvin says, “Guns and aloha don't mix." Hawaii and California are among states with strict laws limiting carrying guns in public. Those laws will now need to be loosened.

EXPLAINER: How a G-7 ban on Russian gold would work

Russia appears to have defaulted on its foreign debt for the first time since the 1917 Bolshevik Revolution, and the U.S. and its allies are taking aim at the former Soviet Union’s second-largest export industry after energy — gold. On Tuesday, the Group of Seven nations agreed on a ban on Russian gold imports in the latest round of sanctions over Russian President Vladimir Putin’s invasion of Ukraine. A White House official says the ban is another way to block paths between the Russian economy and the broader global financial system. The gold import ban is meant to isolate Russia economically, starve its funding arm and prevent money laundering.

More people were taken to hospitals Monday in a presumed migrant smuggling attempt near San Antonio, Tex. that may be the deadliest outcome of thousands of similar attempts.

Gov. Andy Beshear has taken executive action to activate the state’s price gouging laws. He's touting it as a consumer protection measure amid sky-high gas prices straining Kentuckians’ budgets. The Democratic governor signed an executive order Thursday declaring a state of emergency. It's in response to gas prices hovering close to $5 per gallon. With his action, Kentucky consumers can report suspected price gouging at the pump to Attorney General Daniel Cameron’s office. Beshear says “every little bit helps” in trying to buffer consumers from increasing fuel prices. Cameron is urging Kentuckians to alert his office to any signs of price gouging.

Ukrainian officials say their country's forces are withdrawing from a besieged eastern city to move to stronger positions. The industrial city of Sievierodonetsk, the administrative center of the Luhansk region, has faced relentless Russian bombardment. Ukrainian troops fought the Russians in house-to-house battles before retreating to a huge chemical factory on the city’s edge, where they holed up in its sprawling underground structures with civilians. Luhansk Gov. Serhiy Haidai said Friday that the Ukrainian troops have been ordered to leave Sievierodonetsk, which has been reduced mostly to rubble and seen its population decline from an estimated 100,000 to 10,000.

With Roe overturned, rollback of gay marriage and other rights feared

The Supreme Court has struck down a restrictive New York gun law in a major ruling for gun rights that is expected to impact half a dozen populous states.

An Idaho public utility's nearly two-decade effort to renew a three-dam hydroelectric project license on the Snake River on the Idaho-Oregon Border is advancing with federal regulators announcing plans to update an environmental study. The Federal Energy Regulatory Commission this month said it will prepare a supplemental Environmental Impact Statement to consider new developments since it completed the 2007 document for Idaho Power's Hells Canyon Project. The commission says it wants to consider fish-related protection measures. It also wants to consider water quality certifications issued by Idaho and Oregon. Hells Canyon is critical to Idaho Power meeting its stated goal of providing 100% clean energy by 2045.

British Prime Minister Boris Johnson’s leadership of the Conservative party has suffered a heavy double blow as voters rejected the Tories in two special elections. In the southwestern constituency of Tiverton and Honiton, the Liberal Democrats overturned a 24,000 Conservative majority to win, while the main opposition Labour Party reclaimed Wakefield in northern England. The contests, triggered by the resignation of Conservatives hit by scandals, offered voters the chance to give their verdict on the prime minister just weeks after 41% of his own MPs cast their ballots against him. The party’s chairman quit after the results early Friday, saying the party “cannot carry on with business as usual.”

Farmer says Amtrak crash could have been averted

Farmer says Amtrak crash could have been averted